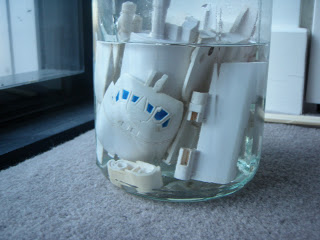 Disclaimer: The below is a record of my experience. If you try it, it is entirely at your risk. You must not let your bare skin come into contact with Hydrogen Peroxide.

As mentioned here, I bought an MIB Galaxy Shuttle from Japan for E. I got it at a good price, the box, foam and paperworks were great, but the toy was not so good.

It was not really yellowed, as one would expect G1 white toys to be, but it was brownish. Almost like someone dropped it in mud and left it there soaking the mud in for a few days. I was initially quite displeased with the toy condition because the seller only stated that the sticker condition was not so good but didn't mention that the toy was brown(?).

However, with the recent 'discovery' of the wonders of H2O2 (Hydrogen Peroxide; can be bought at pharmacies), E and I decided to do our own little project and restore Galaxy Shuttle to his former glory.

This is a picture of Galaxy Shuttle before the restoration - many parts of that were white has clearly turned brown; his upper legs are also visibly yellowed. 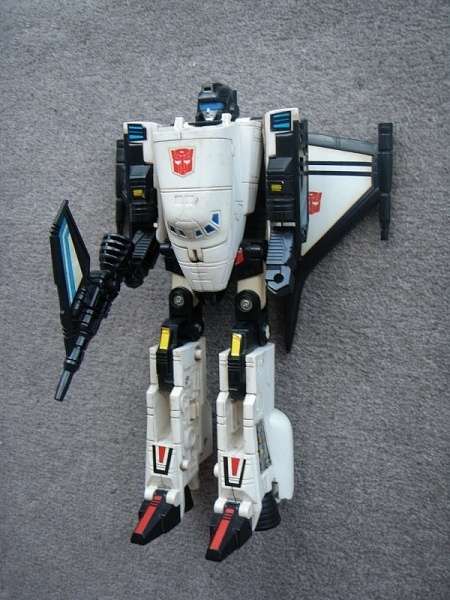 STEP 1:
The first step was to completely remove all the stickers from the toy using my trusty Zippo Lighter Fluid removal of stickers technique.

STEP 2:
We then proceeded to disassemble the entire toy. Below is a diagram we drew to tell us which part goes where and which screw goes where. 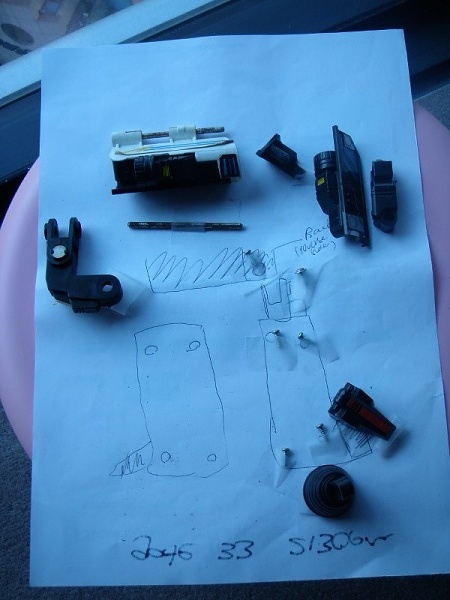 These are all the white parts that require soaking in H2O2. 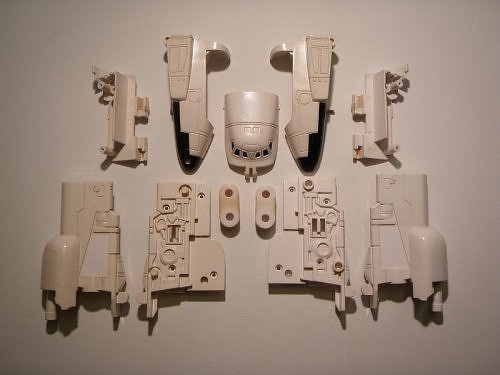 The parts are clearly brownish/yellowed as can be seen here. The white portion remained white because there was an Autobot symbol there previously. 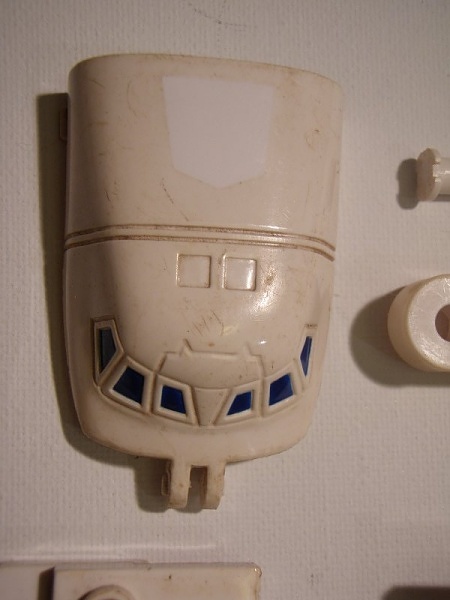 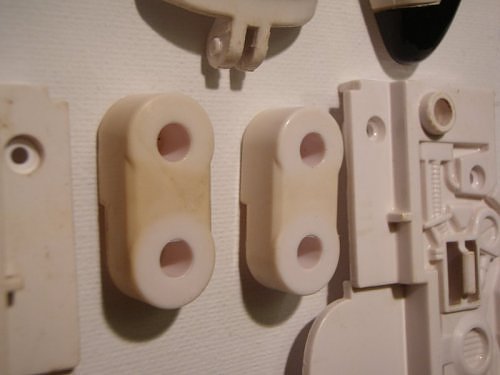 I used 2 small bottles of 250ml, H2O2 at 3% concentration. I have heard of people using 6% or even 30%, but was not willing to apply something so corrosive to a rare and expensive toy (note: 30% is industrial concentration H2O2, which should be used with proper hand protection; I don't think this can be bought off the shelf at pharmacies anyway).

I soaked the yellowed parts, all at once in a glass bottle which can sealed air-tight.

I soaked them for 3 days under mild sunlight of about 2-3 hours a day. Then relocated the bottle to my office which faces Sydney Harbour, where it was exposed to intense sunlight of 4-6 hours per day for 1.5 days.

Sunlight is the catalyst for the reaction that will whiten yellowed parts.

I have found that, unless the yellowing is severe, it does not matter whether your toy part is completely submerged in the H2O2 or not. What is important is that the bottle is sealed so that the H2O2 evaporates and condenses within the air-space of the bottle itself. 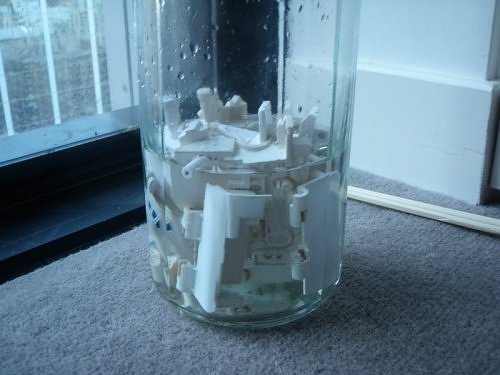 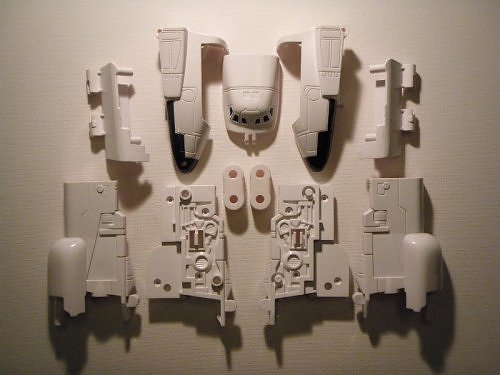 The canopy has turned completely white with no visible damage to the blue painted windows. 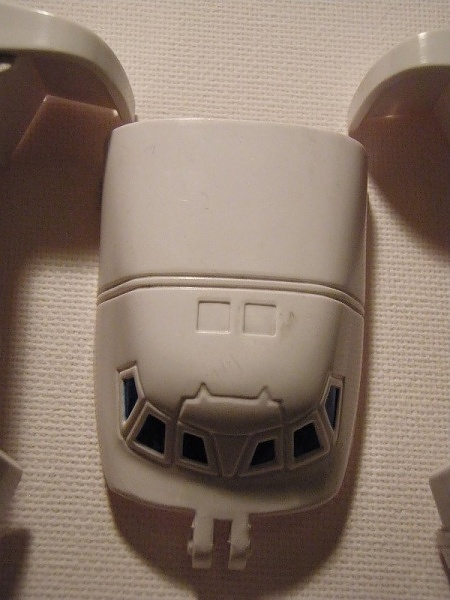 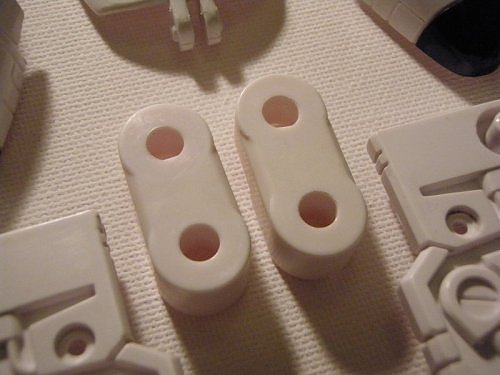 Before (left) and After (right) side by side comparison. Click on pictures to see larger photo. 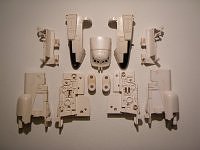 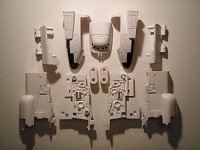 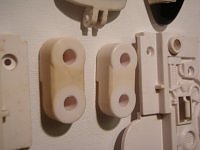 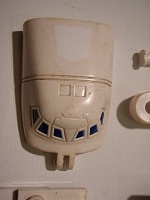 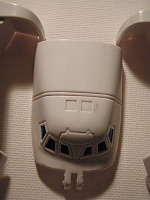 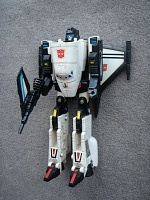 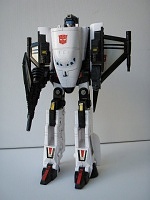 STEP 4:
Reassemble toy and reapply stickers (which if my instructions are followed, will still be sticky).

This is the result. 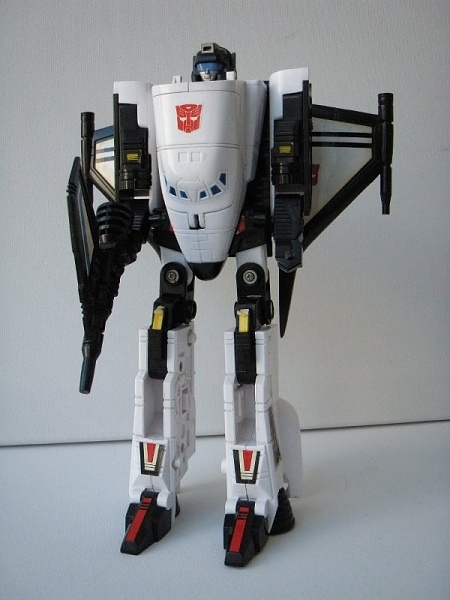 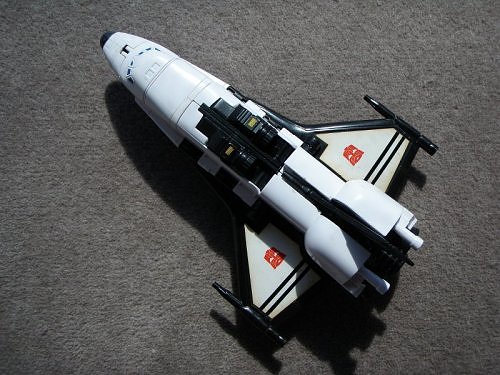 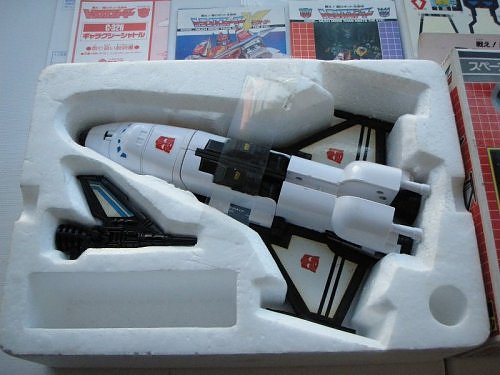 The one on the left has been whitened to the one below... 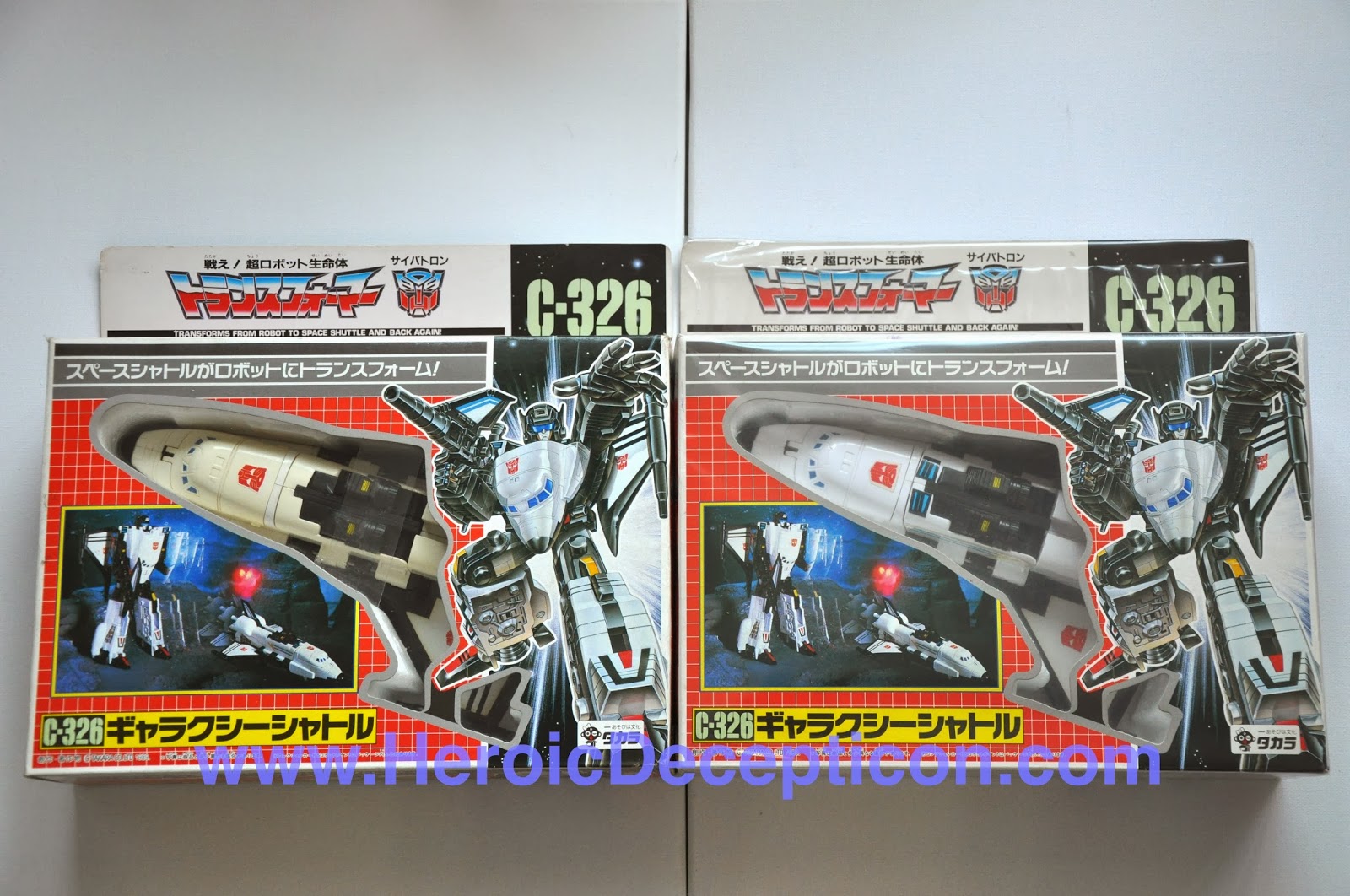 MIB, with an emphasis on "Mint" once more! 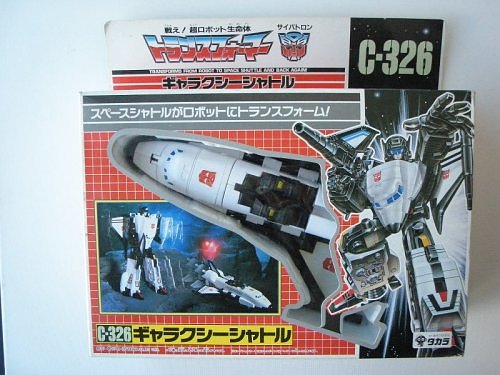 A member of OZ Formers, Atlmyk, from Atlanta in the USA has given the above process (more of less) a shot and discovered further interesting facts and tid bits about the whitening process that prospective TF restorers can try.

This is what Atlmyk said:

"Not sure if this has been mentioned here before but I know glass blocks most UV light. Here is the best explanation I can find and link on the webbernets...
http://www.physicsforums.com/archive/index.php/t-382015.html

The point being that using a glass jar is like putting spf 100 sunscreen on the pieces before putting them out to get as much UV light as possible. Knowing this I tried a different method and got full white in about 1 hour. And putting a jar behind a window is about as good as sticking it in a dark closet. 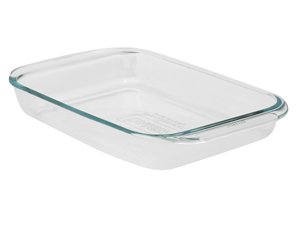 I only used regular store bought 3% peroxide amped up with 1tbs of oxygen cleaner per 50ml. I arranged the pieces and placed outside in a nice sunny section of my deck. I mixed the peroxide and powder in a pitcher and only poured on after I had the roaster where I wanted it. Thin liquids and somewhat shallow pans are a big splash risk and I would hate to get this on my carpet. I covered in plastic wrap and since I had one to use I propped up a mirror next to the pan to drop even more uv rays on the brew. I did this in hopes of avoiding multiple days of soaking, Victory Leo had extensive yellowing. After a little over one hour I went out to make sure the brew was still out of the sun and adjust the mirror. After adjusting I got curious and pulled back the plastic wrap and fished out a piece from under the foam and I was shocked, it was one of the pieces that was almost beyond yellowing and at the point of browning but now after only a few minutes it was white as mountain snow. I brought it in, washed and compared and it was fully whitened.

Long story short (tldr) Get as much uv light as possible and don't worry about strong peroxide. I did this on April 9th in a north Atlanta suburb in 2pm sun."

See the restored Galaxy Shuttle in its full glory here...