The question is this: is there a Transformer that is more hateful than Wheelie? The answer is yes, that Transformer could be Rodimus Prime.

He is a Prime and he made a mess of it; in fact, he created the mess that resulted in his ascendancy to Prime-hood. Here it is... 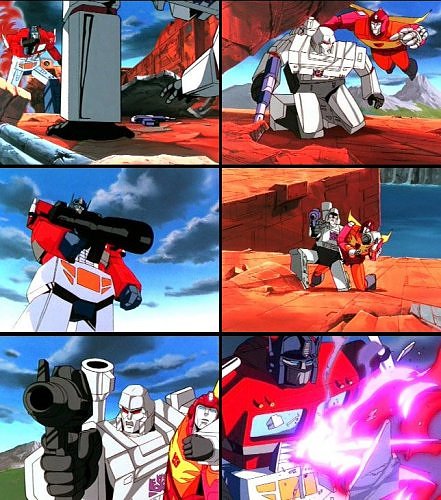 Hot Rod: 'No you don't Megatron.'
Optimus Prime: 'Out of the (fraggin') way Hot Rod (because I can't get a clear shot when you're there and I'm too nice to risk hitting you).'
[screen captures from Seibertron.com]

In the history of G1, both the cartoon and comics, there is no worse Autobot leader than Rodimus Prime. As a leader, he is inferior to Grimlock, Perceptor, Springer, Fortress Maximus and of course Optimus Prime… and he has to constantly whine about it to boot. I have to look no further than the whole of Season 3 as prove of his incompetence. Since TFTM, Rodimus Prime has never had another decisive win over Galvatron and the Decepticons in either cartoon or comic.

There may have been some dubious leaders over the course of G1, but none (except Optimus) had the very power and wisdom of the Matrix at their disposal- none but Rodimus Prime, and he stilled sucked.

The Rodimus Prime toy lowers the stature of this character even further. I recall my disappointment on receiving him during my childhood.

I think that (1) its head is poorly sculpted; (2) it has one of the most simplistic and uninspiring transformations for a toy of its size and its price range; (3) in robot mode it has all of 2 points of articulation and is rigid like a viagra overdose; (4) it is badly proportioned as a robot; and (5) its vehicle mode feels like a lump of solidified lead. 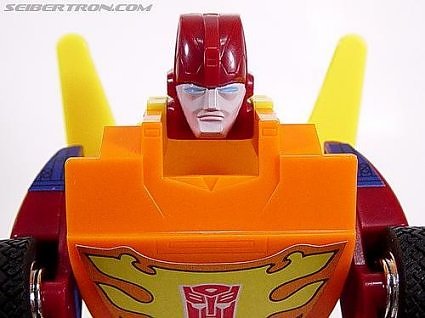 Transformer with cataracts. No wonder he doesn't have a clear vision
[image from Seibertron.com]

With the above in mind, how can Trans-fans hate Wheelie more than Rodimus Prime? Surely they must hate Rodimus Prime if they are to hate Wheelie. At the very least, Wheelie doesn’t whine and didn’t get used as a shield and indirectly aided Megatron in killing the greatest Autobot of all. In fact, the Wheelie toy even has 2 points more articulation than the Rodimus toy.

For myself, I know that Rodimus Prime stands quite a few rungs lower than Wheelie in my Transformers ladder.

***
Read the other side of the story
Forum Discussions

Posted by Heroic Decepticon at 19:15