Pick of the Day - Transformers emblems on our phones 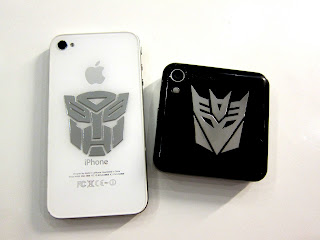 Yesterday, E presented me with these...

Autobot and Decepticon emblems, silver, shiny, glossy and mirror like.

One on E's phone and one on my phone.

Thanks E!
Posted by Heroic Decepticon at 22:00 2 comments: 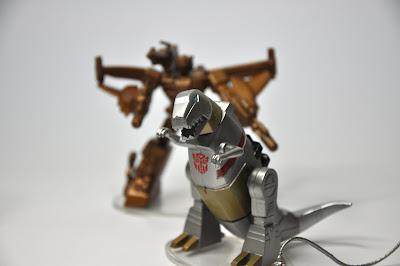 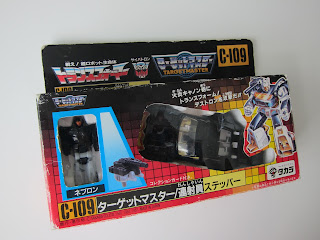 With all the SCF excitement on my blog recently, I thought I'd mix it up a little and update with a little G1 items, just to mix it up a little. This of course, is no ordinary piece - this is one of my final vintage G1 pieces, this is the 'brother 'bot' of Artfire, this is Stepper!

Many would say that Stepper has fallen from grace, that it is hardly worth the plastic it is made of, mainly due to the fact that the TFC reissue of Stepper and then the TRU reissue is so readily and cheaply available in the market. Even today, close to a decade after these reissues were released, it is still relatively cheap and easy to find a reissue Stepper (or Riccochet as Hasbro calls it).

As a result, not many collectors are too interested to hunt a vintage Stepper, much less pay the big bucks that is its inevitable price tag. So, what was once a Transformer that was worth more than USD$1000 and the crowning jewel of a select few collectors' collections, is now playing second fiddle to the relatively much rarer C-108: Artfire. 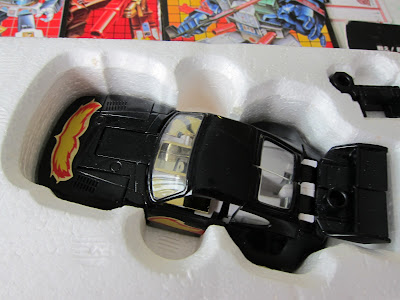 Why would I be interested in getting a vintage Stepper when I already have 2 pieces of the TFC reissue Stepper, one might ask. A few very simple few reasons come to mind: 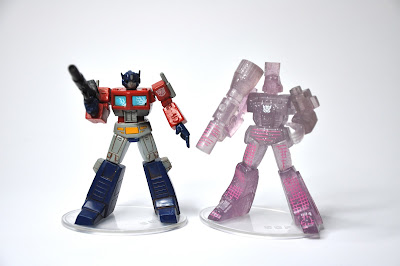 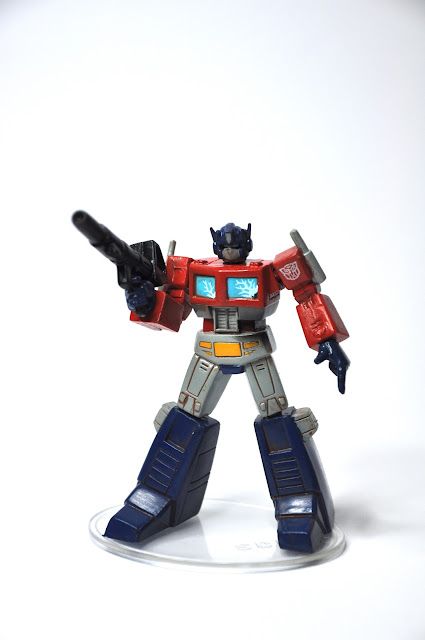 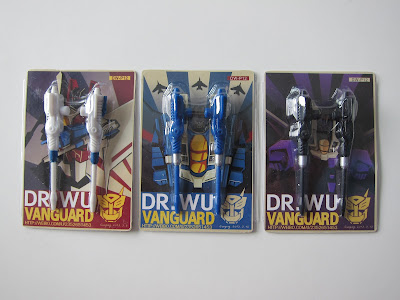 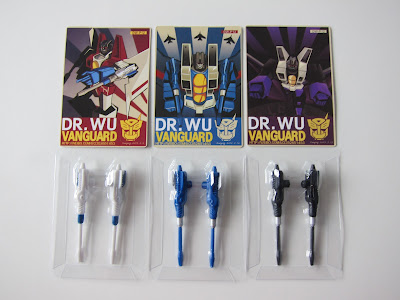 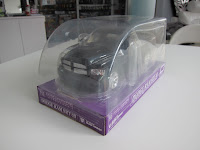 As I mentioned in the previous post, Wonderfest exclusive BT-17: Black Convoy had arrived last Saturday.

Now, it's time to let his darkness, shine!

Before that, I'd just like to recognise where I bought it from - Entertainment Hobby Shop JUNGLE. I would like to thank them for their prompt and efficient service and very good packaging and communications. I received the item about 2 days after the time it was shipping out, which was awesome. Thank you JUNGLE staff!

So here he is, his dark majesty Black Convoy. Not Nemesis Prime, but Black Convoy. This is him in MISB status... erm, not sure if I can call it that. But its not MOSC either... so is it in a sealed box or a sealed card? I can't tell. 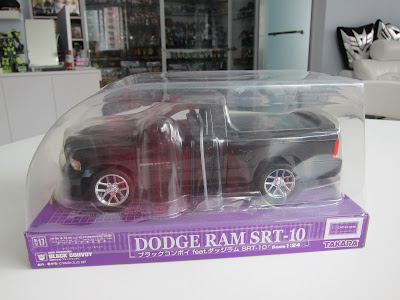 The front of the packaging. What I really like about this release, although it matched the Alternators type packaging, it the purity and simplicity of the base - white words on purple background. It just makes this packaging a lot of classy than the US released Alternators. 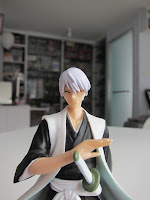 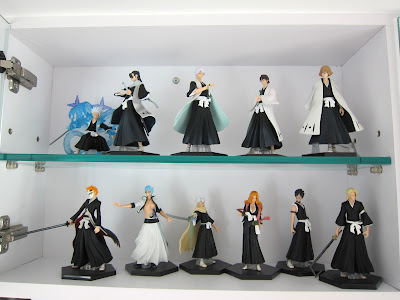 However, since Transformers are that all encompassing, I'd almost completely forgot that I also have lots of Bleach stuff and collect the series as well! (KUMA-NIN, should we 'blame' this on Maz too?).
Read more »
Posted by Heroic Decepticon at 16:02 15 comments: 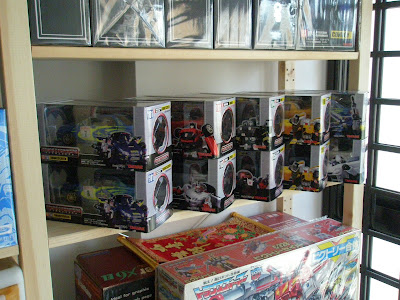 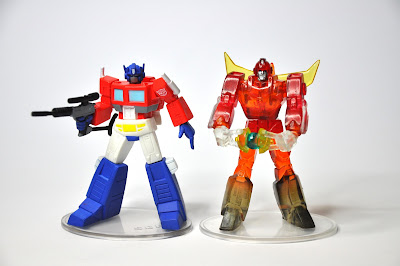 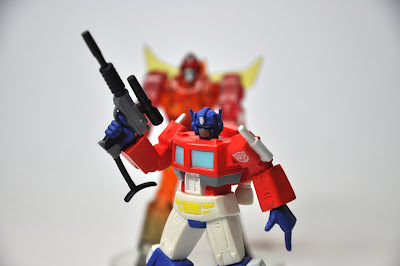 Why is this figure so special to me? It comes down to a number of key reasons, really. Here they are:
Read more »
Posted by Heroic Decepticon at 22:32 10 comments:

It's been awhile since I have listed acquisitions here. To be honest, the acquiring never stopped, just that I've been slack and listed some but not others.

This neat little lot, I bought last Saturday. Nothing very controversial or difficult to get, 4 pieces of third party products and BT-20.

Here we have from left to right:

- FansProject Causality CA-10: T-Bone MISB. Name makes no sense to me. How is the name even reminiscent of Wildrider?

- Dr Wu upgrade parts for the Classics / Henkei Seekers - Starscream, Thundercracker and Skywarp. These look like they would fit nice and appears better than the large silly monstrosities that passes as cannons originally part of the seeker toys.

- BT-20: Argent Meister MIB. Why am I now trying to finish up my BT collection? I blame Maz and his poetic words and beautiful photographs. See what I mean: "BINALTECH BT-01 TO BT-04" and "BINALTECH BT-05 TO BT-08" 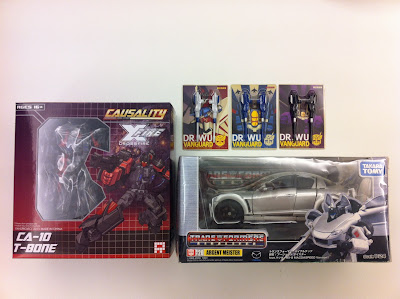 Must've been away from eBay too long, because these prices are shocking

2 days ago, I was on eBay looking at some HoC figures to prop up my ever-growing SCF army (more on that in later posts), and I happened across a number of auction lots for G1 Black Zarak parts.

'Ah', I thought, 'perhaps it's time to finally complete my second Black Zarak'. You see, aside from my pristine MIB Black Zarak, I also have another loose Black Zarak to display and to 'play' with (eek! really? GPS!).

The seller of this loose Black Zarak, a guy named newausbot78 (a horrid irresponsible seller) claimed that the Black Zarak was complete. However, when it arrived, it was missing the silver lift parts. He said he would send the parts, but never did and just never contacted anyone again. I'm not the only victim, several other OZ Former forum members fell prey too.

So, long story short, I needed a silver lift to complete the second Black Zarak.

Enter this batch of Black Zarak parts auctions and lo and behold, there was the exact thing I needed. It was slated to end during lunch time today, and up to 30 seconds before the auction ended, the price was US$6.50, yup, six-dollars-and-fifty-cents.

When the auction ended, bam!

Price ended at $90. Nine-zero-dollars. For a mere Black Zarak lift. I was staring at the screen in disbelief.

I then went to check out the other auctions that I watched, but did not bid on.
Read more »
Posted by Heroic Decepticon at 19:31 22 comments:

Unknown to many, I'm streamlining my collection and have been for the past 1.5 months.

Whilst its no secret, I suspect that the majority of readers here will not have heard or seen the sales because I've had them all listed on Yahoo Hong Kong, and with Mandarin descriptions no less (thanks to E for drafting).

Selling on Yahoo HK is pretty cool because I never have to post out anything. When a person wins an auction, we will just arrange for a day and time to meet up in person and transact. The most common meeting points are the train stations that are near toy shops or near my office. Its convenient to meet up and transact and then wander off for toy shopping before heading home in the evenings. It's great fun I gotta admit.