Saw the news a few days ago that Encore 20: Devastator Giftset (from Takara) has been released. I was quite excited because this was the first reissue of a combiner team outside of the oft-repeated and incessantly released Bruticus.

Went down to In's Point after work to pick up a set. Not every shop has it, but I'd consider it is 'all over the place' and easy enough to get. Prices ranged from HKD$730-780 depending on which shop its from.

I heard from a Singapore source that there was some issue with the Mixmaster in this set - apparently "Asia sourced versions" as opposed to "Japan sourced versions" are "purported missing the Mixmaster head". Transformers releases in recent years are rife with QC issues, so its not really a big surprise there. What this meant for me is this - I needed to open it double quick time to check.
A quick note that the HK sourced 'version' (whatever that means), comes with an exclusive Devastator badge which states "2011-11, Devastator". 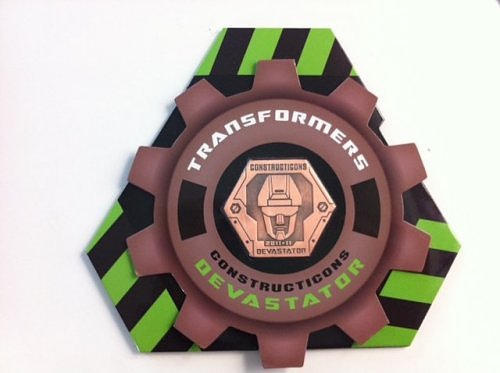 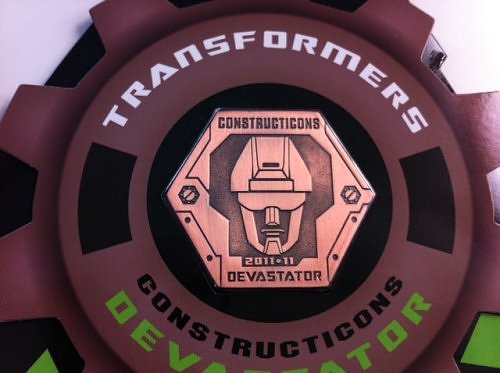 Then, some shots of the exterior. 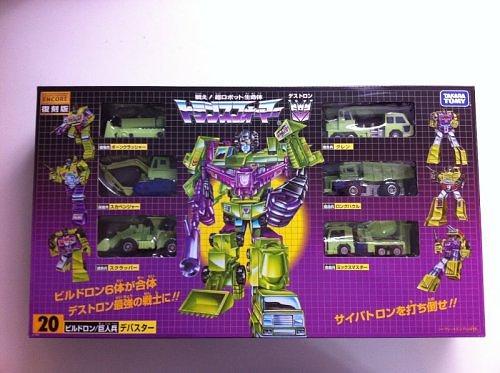 The "Encore" label, clearly marking this as a reissue 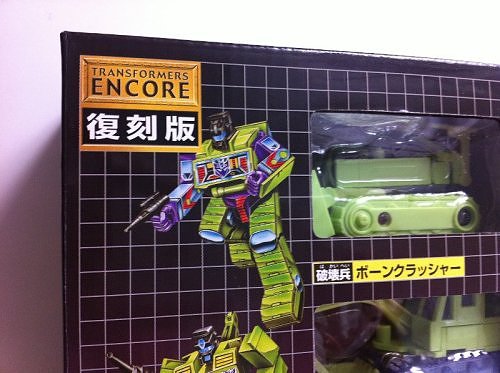 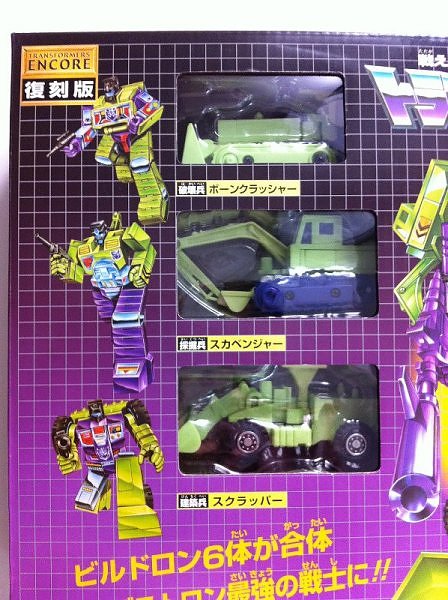 Close up of box right 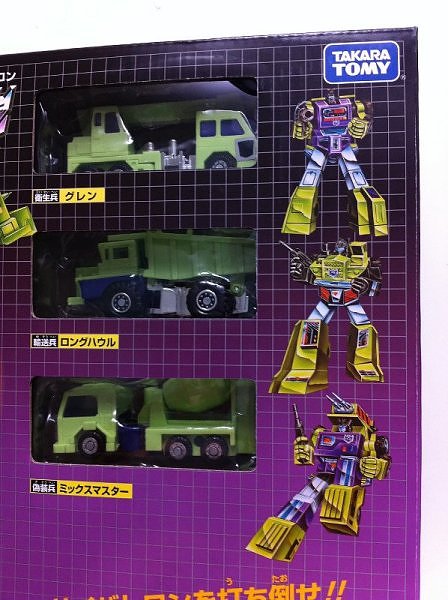 Back of box. Still looking very classic G1, but there is a distinct lack of any Tech Specs. 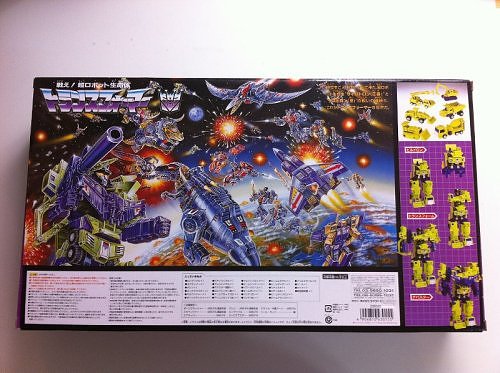 The box is made of tougher paper than the vintage version, but the printing is not as sharp and seems to be slightly off to me (could be lighting).

The insert (sadly, not styrofoam) 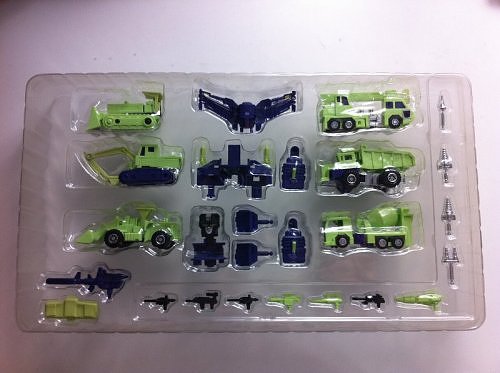 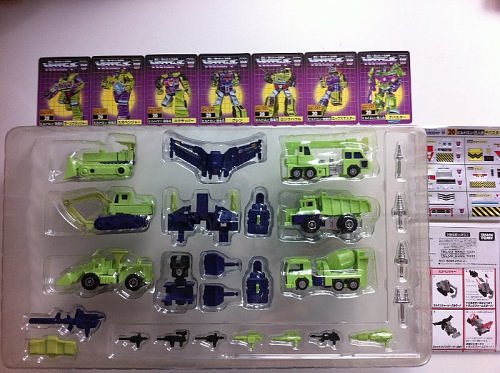 The inserts - bio cards are a very welcomed inclusion into the set. 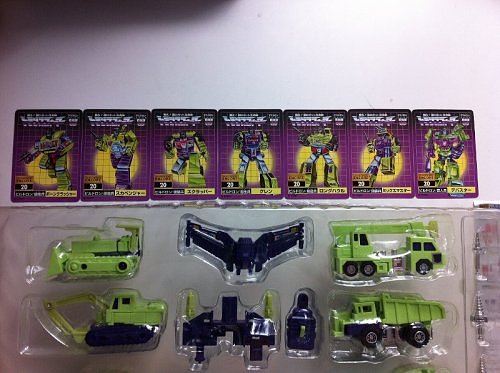 Mixmaster head? Check, it's there. 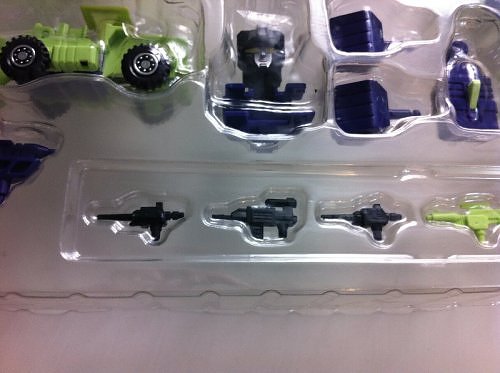 As a person who owned all the Constructicons during childhood and having a very deep impression of each toy, I'm going to quickly review this set.

Overall, the green colouration of the reissue Constructicons are a little off. It's not the same rich green of their vintage predecessors. The green is lighter and each piece feels like its made of less dense, perhaps poorer quality, plastic? The pieces also feel 'lighter' than the vintage ones. 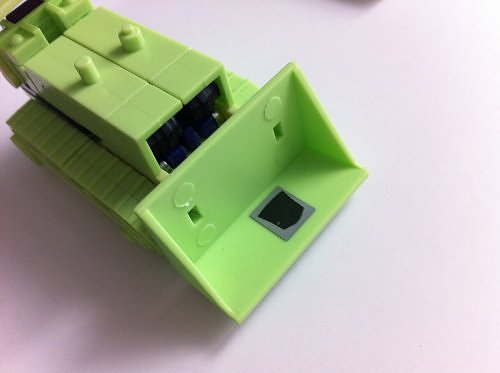 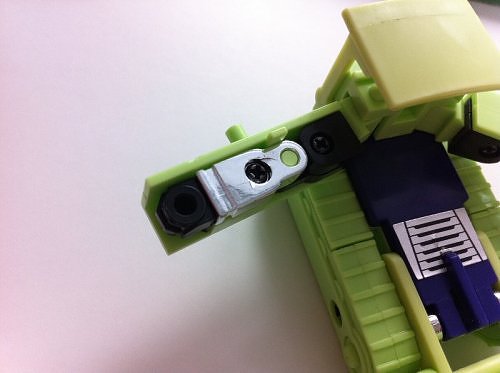 Scavenger - No apparent QC issues, but again, this piece feels less dense and lighter than its vintage counterpart.

Scrapper - 2 QC issues. (1) left chest sticker not properly applied and already peeling right out of the package! (2) right chest sticker appears to have be taken out readjusted and reapplied, but is still slanted. 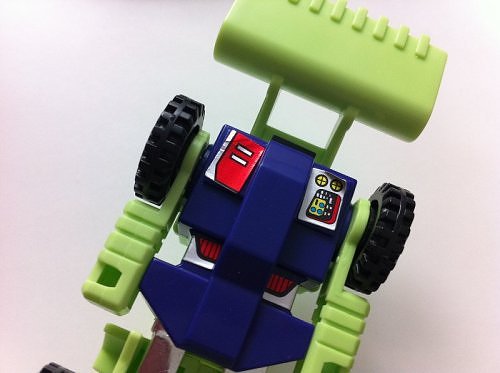 Hook - 1 QC issue. (1) chest and abdomen stickers are peeling, right out of the package. 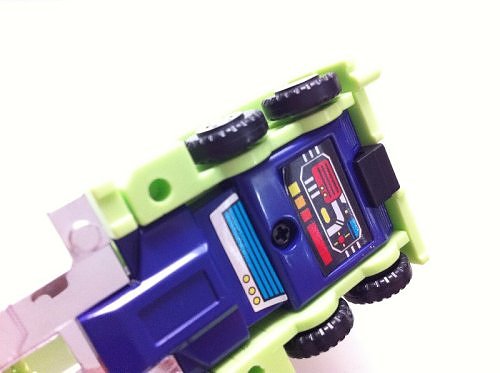 Noticed something strange, the window colour for the crane operator booth is black instead of purple. Can't remember whether the G1 version is black as well though. Oddly, I actually think this mold has been improved on and transforms better than the G1 molding, which is prone to breakage, especially the legs. 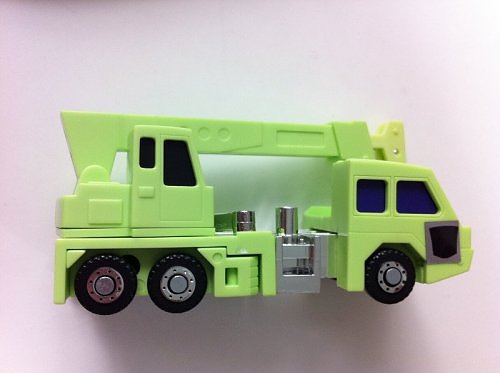 Long Haul - no apparent QC issues. Like Hook, I think the molding is an improvement over the G1 version, transforms much better to robot mode. But like the others the plastic quality appears to be of lower quality.

Mixmaster - no apparent QC issues. Head is there unlike what my Singapore person says. One thing though - the rub-sign appears to have been applied in an inconvenient location (see photo). I suspect that the leg connector required to snap into Mixmaster for combining into Devastator would inevitably damage the rub-sign. 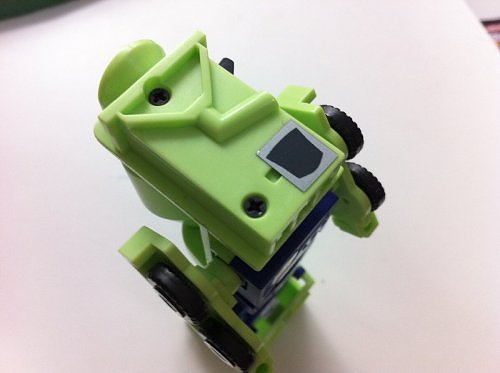 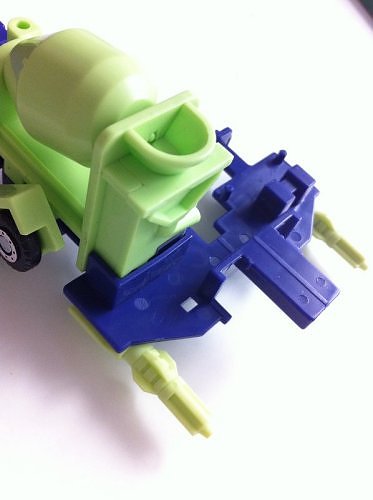 Now to combine them into Devastator. Some noteworthy points. The connector pegs for Mixmaster and Scrapper feels much improved from the G1 versions. Also Hook comes together as the chest piece much better. The key difficulty is fitting the leg connector into Long Haul, man I took like 20 minutes.

The overall colouration of the combined Devastator makes it appear a little KO-ish for some reason. It's just the off shade of green, not rich enough but yet slightly too lime green. I can't put a finger on it, but it just does not sit right. 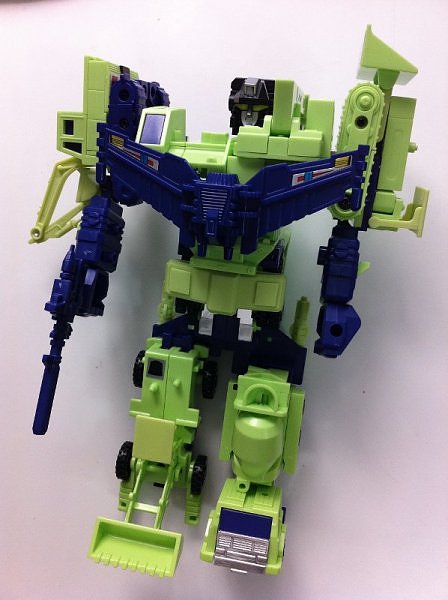 It's also a disappointment that the cement drum of Mixmaster is not painted grey like some of the promotional shots depicted. Also disappointing that Devastator's eyes are not red as per the cartoon, especially since Takara has taken some effort to 'correct' eye colour (think Encore Trailbreaker and Hoist for example).

Overall - This is a good set to have if you don't already have the vintage G1 pieces. It's good value for money too. There are some QC issues, for overall not fatal to enjoyment of the set as a whole. My key issue is the plastic colouration which I still, after about an hour of fiddling with the pieces, don't think is the right shade of green and makes it look KO-ish. 6.5/10 for me - good value, but if affordable, get the vintage G1 piece.
Posted by Heroic Decepticon at 02:06 18 comments:

some updates, some market watch items

Like mentioned in my previous post, it's been awhile.
It's been awhile because I have been hitting the books.
It's been awhile because I did not have the time.
It's been awhile, but I do have updates.
On the Transformers community front, I have been helping out Botch and Ginraii over at Botch's Box Art Archive. I have scanned and contributed high resolution box art images of many characters including Artfire, Minerva, Go-Shooter, Black Shadow, Blue Bacchus, Sky Hyper, etc. I did not have time to edit them, so I guess they will appear there when Ginraii or some other editor does the editing.
On the Transformers toy collecting front, I have been acquiring stuff too. These include some MOSC Triggerbots and Triggercons, very sweet, and also a certain giftset from 1986. Unfortunately, no photos at the moment.
On the non-TF front, I have started acquiring some pieces of "illusion is the ultimate weapon" aka M.A.S.K. Quite excited that Goliath, my childhood favourite, is among these.
On to Market Watch...
The TF market in HK has been really quiet these past months. G1 pieces are coming in few and far between.
At In's Point, the shop with the Big Powered set (incomplete) has sold and now has a complete loose Overlord for sale.
Wai Gu Kok has some 'new' stuff in including (yet another) C-114 Fortress Maximus unused MIB, C-328: Victory Saber giftset MIB unused near C10, C-324: Star Saber MIB unused, C-327: Victory Leo MIB unused, D-93: Mega Zarak (don't know condition), yet another D-307: Overlord MIB unused near C10, Goodbye Megatron giftset and Goodbye Convoy giftset.
Sporadically, TF: Prime is coming out with Acree selling out the fastest. Hobby Base still has them and is selling Arcee and Bumblebee as a set for HK$248, a pretty good price I think.
Since the release of MP-10, the prices for MP-04 has spiked (why? I don't know). Now, people are asking between HK$2000 to HK$2800 for a MISB MP-04. Nuts huh.
Will update with photos soon.
Cheers,
~ HD
Posted by Heroic Decepticon at 23:13 5 comments:

The nefarious nihilistic negativity of... Negatron

It has been awhile.

For the past month, I have been hitting the books in heroic style, something I have not done since the distant memory that were my university days. Book hitting evolved into various study groups which at times devolved into all manner of conversations.

In one of these conversations, h-beest (a person, but not exactly a Transformers fan), mentioned a Transformer - Negatron.

"What?", I asked bewildered (so sure that it was preposterous, bordering on sacrilegious that there was a Transformer who escaped my attention).

"He appeared in the Family Guy and Negatron transforms into a canoe and he is very negative", she said.

With that info, I found out more about Negatron, who no doubt is a parody of the Decepticon leader Megatron.

"Negatron is a member of the Decepticons with the attitude that nothing will ever go right for them. When Megatron is trying to rally the Decepticons in "Tiegs for Two" into another scheme, he is shot down by Negatron. Megatron points out that his only power is to turn into a canoe, and Negatron says they'll regret needing him if they have to battle on a slow-moving stream.

It should be noted that Negatron is a Family Guy original creation and not an original Transformer.

He is voiced by Alec Sulkin." (source) 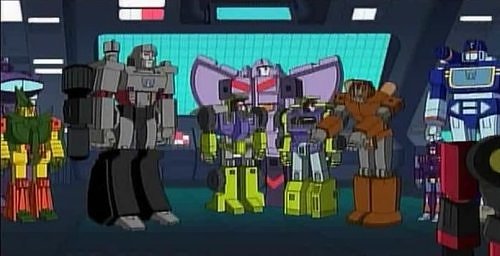 In science, Negatron is: (1) An electron with a negative charge, as contrasted with a positron; (2) an obsolete word for electron.

In music, Negatron is: an album by Canadian metal band Voivod.

In gaming (World of Warcraft), Negatron is: a level 69 fel reaver who often comes to visit Area 52 to destroy its machines. He doesn't "do" anything other than a minor scripted scene.

From the Urban usage perspective, Negatron is: (1) expressing denial or refusal; saying "no"; (2) one who continously views all subjects in a negative way on a dialy basis.

What an interesting 'fella, this Negatron guy. 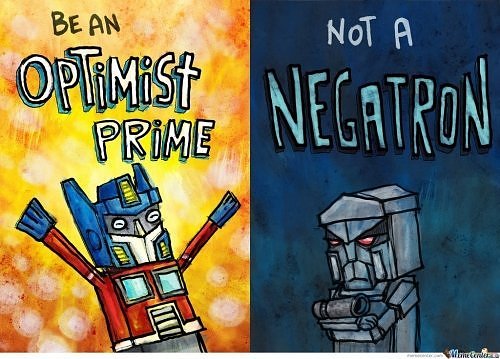