After speaking to collectors on FB and TFW2005 and also friends, I think eBay seller "tfvictory1" is potentially a scammer, so please beware!

Screen cap of this person: 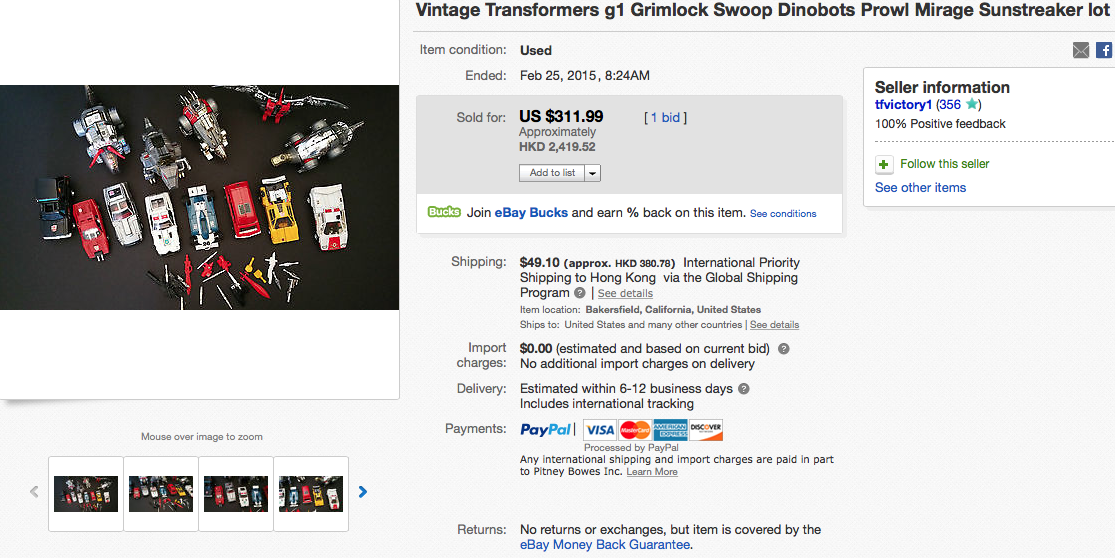 1 to 2 days later the seller relisted the same entire lot with the same photos and the same description for sale.

This is the relisted auction, which is still live at the time of this writing and there are already 3 bids on it - http://www.ebay.com/itm/Vintage-Transformers-g1-Grimlock-Swoop-Dinobots-Prowl-Mirage-Sunstreaker-lot-/261793624026?

I thought something was fishy and email the seller immediately. This is the chain of emails back and forth until he stopped replying.


"Can you let me know when you will ship this out? Also I see it has been relisted again on eBay?"


"I'm sorry can't send this lot to you I will send you cancelation email and you have to talk to paypal and ebay about this situation. I had 1 buyer buy a Defensor Giftset from paid it the same day then file a item not received the same day. Then I sold a Soundwave mp the buyer waited until I shipped Wednesday then file a unauthorized charge back to paypal. EBay always took $131 for so call fees which I only owe 101 $65 that not even due until march 15. I had $491 in my pay and now it's saying I'm 432 in the negative. After speaking with paypal and ebay for an hour they couldn't do anything but the charge back, the unauthorized fees which is not even linked to paypal. As far as the guy that filed a item not received he'll probably try to rip me off too. I'm not giving away my collection for free and I'm sorry you have be apart of this mess but I'm not losing 500 dollars and giving to ebay and paypal." 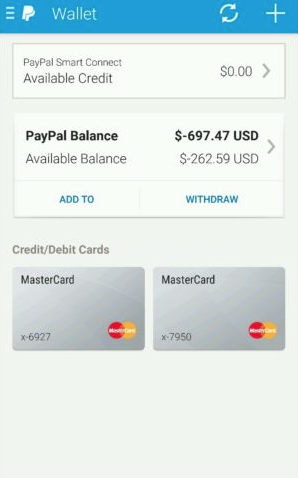 
"No problem if you don't want to sell. Just refund me. Auction ended and I paid super fast in hopes of getting these.
I've not heard of issues like that with PP before, but a buyer cannot file a item not received until the expected delivery date is up and you are protected as long as you have tracking.
If you've experienced such issues, then it won't be any different when the winner of the now listed auction pays you.


"Exactly my point, I told ebay and paypal the same thing. I did ship it out on Tuesday with the tracking and signature confirmation."


"Another thing, I've checked your ended auctions and there's no Defensor or MP- Soundwave past listing and you've also sold a Seacon giftset twice it seems. Dude, tell me the truth man"


"Yes a 0 feedback bidder that hasn't responded to my emails about an hour ago and a 1 feedback buyer that bought a yoth prime from Australia which also has not responded. I'm really getting fed up and giving up on ebay."


"Dude, it's 3am in Australia now, of course the fella wouldn't have responded.

I'm sympathetic, but please recognize that each auction is a separate contract. I won. I paid you. It has NOTHING to do with another of your other auctions, BUT you're telling me that because of these other extrinsic auctions, you won't ship to me.

That just makes no sense, sorry. And you went and relisted the auction that I won"


"That's true, but I have a feeling that he's gonna say cancel my transaction because the shipping and taxes is going to be too much. I've been selling and buying on ebay for 3yrs now and know the outcome with these low feedback buyers. I ended the auction early for the Piranacon set after I noticed funds missing on paypal then relisted it. I'm attaching pics to show you I'm not a scammer or a fake. I'm just really upset. These figures were from my personal collection and I displayed them with pride and to have people try to scam me and get something for nothing just makes me mad. Again I'm really sorry about this and I hope you find it in your heart to forgive and apologize for dragging you into it"

He also attached this photo, where he shows he's doing it to another buyer too!!! 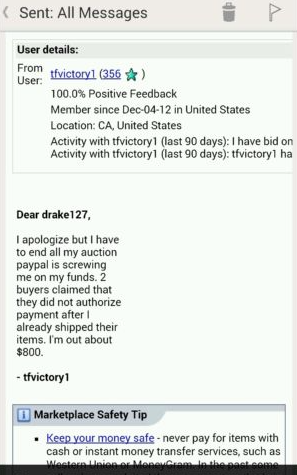 
"Here another one that I sold yesterday. A scorponok" 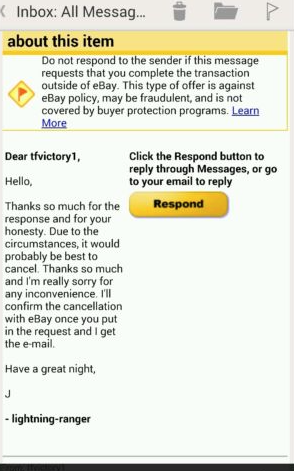 
"Only reason I bought from you is your solid feedback.
Well if he cancels the transaction after he's won, then all you're really out of pocket is the listing fees and final value fee, which I suspect would be less than $20.
Between you and me, I have PAID you, fair and square and honestly and in good faith.

Now you're telling me you won't ship to me and you won't refund and is just going to keep my money?? You can see how that comes across as a scam I'm sure"


"That's things I'm in the negative, I can't even refund you the money. I'm being honest with you."


"I've never heard of this happening before, really.

If you cannot refund, please ship the items to me. They will have a good home.

It would be absurd for you to walk off with my money after I've paid you - see attachment.
If I don't receive either the items or a refund, I will open a dispute with eBay and PayPal and you might end up being more in the negative than you are now (assuming that is even true)."

I attached a screen cap of my payment receipt: 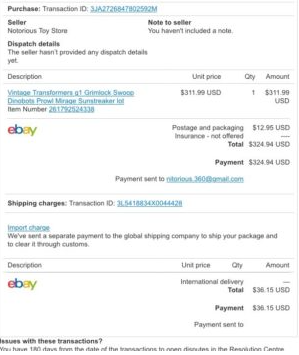 
"I really don't care anymore, paypal ebay and scammer on ebay think they can rip me off my collection that I work hard for. I don't think so , I'm not a charity for them and they can refund your money from their 100% money back guarantee that they offer buyer and kick the seller to the curb guarantee"


"I have sold and bought 40k worth of TF without any problems and to have buyers file fake charge backs after I shipped is a slap to my face. Again I apologize for dragging you into this conflict and hope you can find it in your heart to forgive me. I didn't keep your money paypal has it in their resolution center."


"BTW the scorponok guy wanted to cancel and the seacon 0 feedback bidder has responded still and the Australian dude is still down under without no response.... I send you an updated screenshot showing no 1 paid."


He attached this picture: 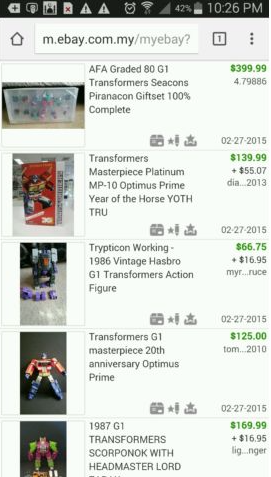 
"hey man, I do have sympathy for you, I do. I don't deny (and do not know whether) you have been scammed before.

BUT I paid you. And you blatantly stated you won't ship the toys.
Now why would any of these other buyers pay you and risk you telling them that you will not ship the toys to them AFTER they have paid?

Or are you telling me that you will ship to the Scorponok guy, the Seacon guy or the Australian guy after they pay? In which case, WHY won't you ship to ME???
Please go think about it. Not much of what you said makes sense."


"Because I change my PayPal email account. That's why I ended all my auctions early so I can make the change. I've sold some rare diaclone TF, sealed TF, and Victory series TF without any issues until now. I'm not out to scam anyone, my issue is with paypal ebay and how charge backs are handled."

E had to go back to the office today, so I had a couple of hours at home after sending her to work. Took out my early year boxed Autobot cars for a shot.

After a decade and a half of chasing down every Generation One transformer, I think it really came down to these, or at least the 1984 / 1985 Transformers that are really close to heart and that I really want.

I don't know know about others, but this is such a sight to me and a real treat... 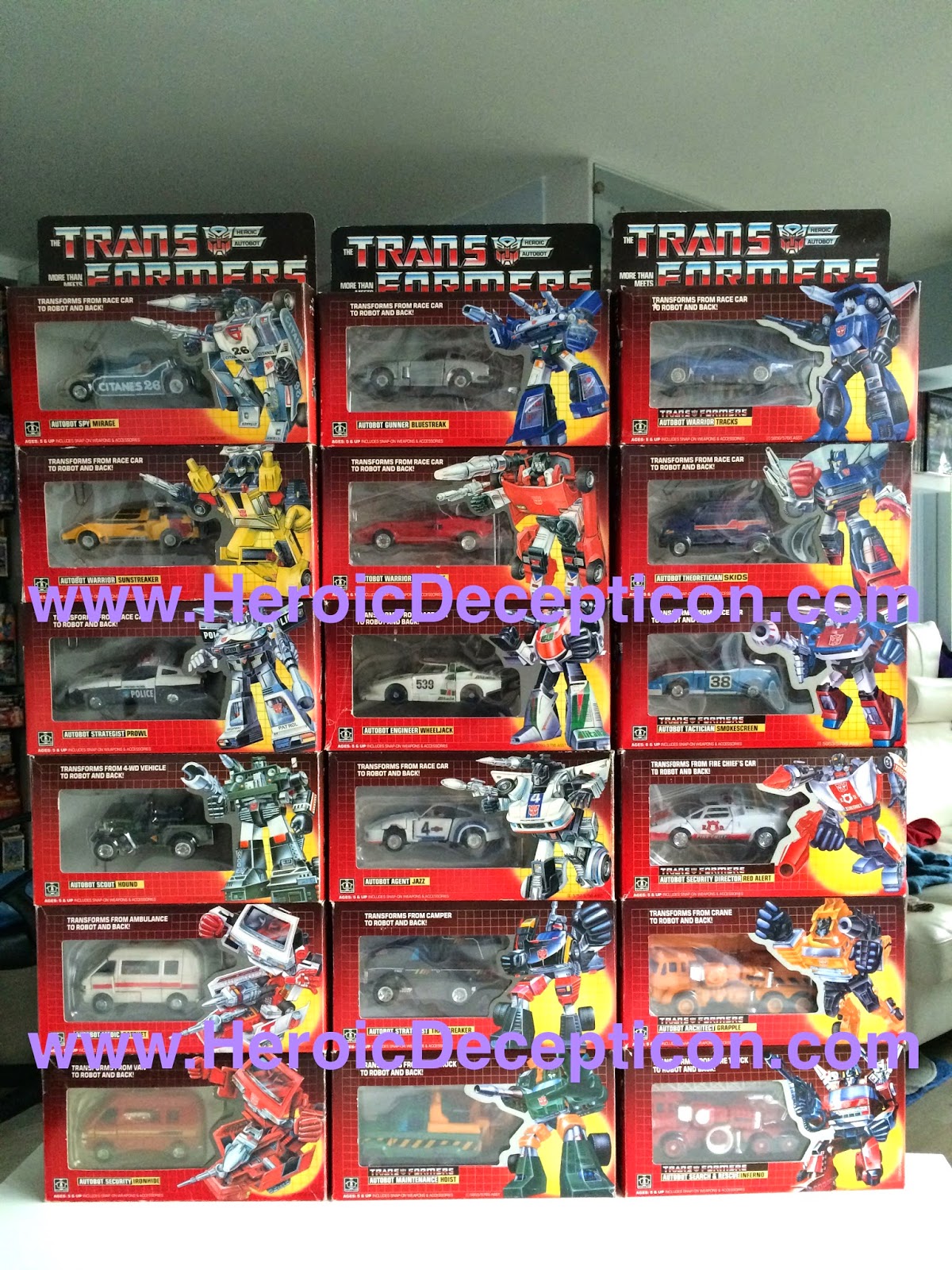