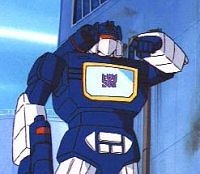 I welcome all comments, feedback, suggestions and any thoughts you may have. I welcome comments directly onto the site or through email. All comments will be accepted unless they are inappropriate (see FAQ).

I have Transformers and other collectibles on sale from time to time. Please refer either to my eBay page or to the FAQ section for more information. If you are thinking of buying from me direct, you may check my eBay feedback to ascertain my selling (and buying) reputation.

'till all are one!

*This is a little blup of the Movie taken from my reply on Botch's site here. I don't think I'll attempt to pen all my opinions of the movie, that would take up chunks of cyberspace.*

With that being said, I did enjoy the movie. As a movie, it was great - nice pace, nice action, humour at the right time (yes, Shia was good), reasonably sufficient characterization. I know, Decepticons not characterised. My take is that Bay took it to the extreme and made Decepticons as militaristic as he could- cold, ruthless, efficient, does not waste Energon on useless chatter (including talking to each other). Afterall, Decepticons were the 'military models' (a la War Dawn).

Still, this movie could have been called 'Giant fcknicg robots from Mars/Venus/Pluto/Space' and still could have worked; it could have been 'Challenge of the GoBots'. It didn't need to tarnish the legendary 'Transformers' brand name.

Knowing how die hard I am about the vintage Transformer cartoons and toys, I would never care for the movie as much as I care about the TFs of the 80s.

But having said that, I'd just go along for the ride now and get off when it ceases to be entertaining.

Posted by Heroic Decepticon at 21:39 No comments: