The road to Victory Part 01- The Victory Battle

I was trying to help Botch locate a scannable print quality back-of-box image of the Victory battle scene.

For that purpose, I dug out my Victory Saber giftset (which is one of the sweetest Transformer toys I have).

To my horror (and probably Botch's), there is no back-of-box battle scene behind the Victory Saber giftset. Ever the opportunist, I took the chance to snap some high resolution shots of the giftset.

This would be one of them. 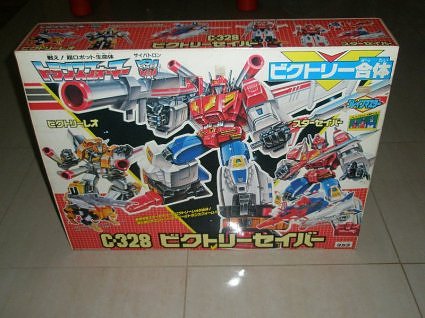 ***
Read all The Road to Victory chapters:
Chapter 01- The Victory Battle
Chapter 02- The Acquisition
Chapter 03- The Photos

Posted by Heroic Decepticon at 15:51 No comments:

My place of power

What was previously logistically impossible has now entered the realm of the lucidly possible. I can start to photograph particular toys for articles I've intended to write for this site; I can document, to a certain extent, the main bulk of my TF collection; and I can also help my fellow TF enthusiast Botch scan in the Victory back of box battle scene from my Victory Saber giftset.

***
Before voraciously hunting down any and every vintage G1 TF I see in Singapore, I thought it nice to do a little 'best of' tally for the HK trip, from which I bought many many TFs.

Most satisfying moment: When the shop-keeper finally decided to sell the 2001 dealer exclusive eHobby promotional poster after initially telling me to take a hike.

Hardest decision made: D-93: Scorponok MIB. It is priced at a point between where I would say either 'yes' or 'no' to a piece in this condition. It took me 3 days to decide.

Unexpected find: This is a tie between (1) the 2001 dealer exclusive eHobby promotional poster; and (2) Takara SCF Act 2. Little did I expect that after a gap of almost 6 years would I come across these fine gems again.

Favourite buy: D-307: Overlord. This was one of the Transformers that 're-awakened' me back in 1999. It is just great to be able to obtain him here at a bargain price, complete and in box.

Worst buy: Hasbro Masterpiece Starscream. Got it on an impulse and at a less than competitive price. I got a feeling I'll be telling myself this more than a couple of times in the following months- 'I shoulda' waited for the Takara G1 coloured MP Starscream release'.

If I could only buy one thing, it would be: 2002 New Year Special Convoy- because I promised AR I would get it for him.

Highlight of the trip: D-307: Overlord. For the reasons above.

Posted by Heroic Decepticon at 03:10 7 comments:

Today, I'll be leaving HK for Singapore. Before that, I wanted to do a final tally of all the toys I've acquired in Japan & Hong Kong: 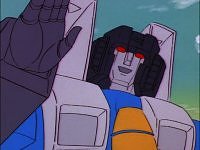 Next stop, Singapore and on to more toys...

Posted by Heroic Decepticon at 04:09 No comments:

These 2 are probably my final acquisitions in HK. Just happened to be in the Causeway Bay area after lunch and bought these as I walked past.

The Hot Rod and the hot babe, here they are: 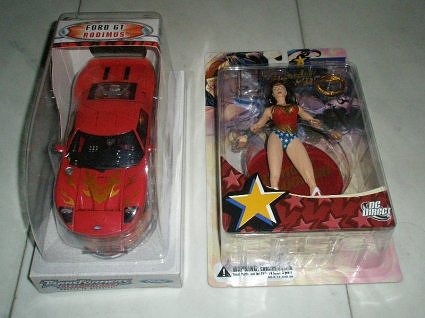 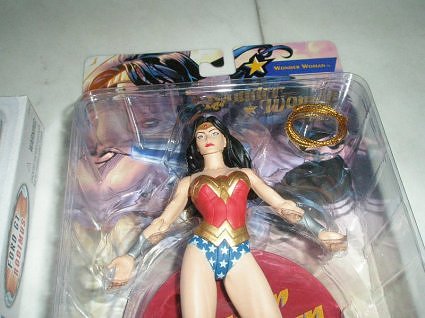 Posted by Heroic Decepticon at 20:49 No comments:

'Not a reissue Optimus and Megatron, again. Not Starscream... again...' was my reaction to the first wave of Encore figures.

It comes as no surprise to myself that I said 'I'm not touching this Encore line with a barge pole'. It's quite unnecessary to add another member to the army of Primes, Megatrons and Starscreams that I already have.

As it were, I still had a particular weakness for Encore 03: Soundwave even though I have the TFC and TRU reissues. Soundwave unlike Prime, Megatron and Starscream, never got reissued in a G1-styled box.

I know, I go weak-kneed in front of all things G1 and Encore Soundwave came in a pretty G1-styled box.

4th Jan '08, HK: Walked around and chanced across Encore Starscream. I decided to buy him because (1) the Decepticon symbols are printed on like for Sunstorm; (2) he had light yellow glass for his cockpit; and (3) the price at HK$200 is quite irresistible.

Starscream became the first of my Encore collection.

Later in the day, I nabbed Encore Ironhide & Ratchet. These 2 are must gets for me because (1) they have not seen a market wide reissue since their eHobby release in 2001 (as seen in this promo poster here, and here); (2) cartoon accurate paper 'heads'; and (3) printed on vehicle stripes that were previously factory applied stickers.

16th Jan '08, HK: Over the last week or so, I became quite taken with the Encore series, probably due to the pretty boxes and the news that Omega Supreme will be one of the upcoming Encore figures. I woke up that morning with an epiphany- I gotta collect the entire Encore line, just like I did for the Takara TFC series.

17th Jan '08, HK: Slightly frustrated that I couldn't also obtain Encore Optims and Megatron the day before because they were all but sold out, I decide to try a new location- Wonderland at Hong Hom.

I was surprised to find Encore Megatron there at HK$380 but with a further discount making the final price HK$323, even cheaper than Encore Soundwave! Grabbed Megs and ran to Mongkok where I chanced upon an Encore Optimus Prime at the very first shop I arrived at.

I bought him massively discounted at HK$430. Encore Primes go for anywhere between HK$480 to HK$600 usually.

And so here it is, the complete Encore series, at the present moment... 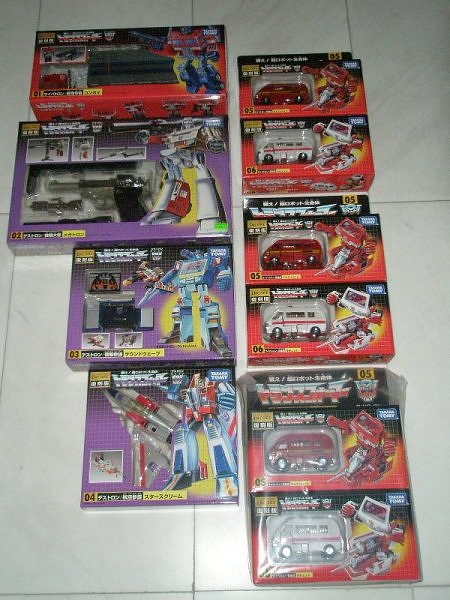 Posted by Heroic Decepticon at 10:03 No comments: 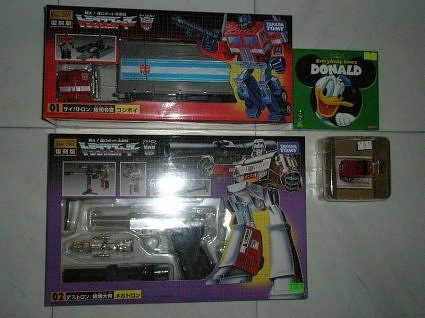 
Highlight of the Day: Encore Optimus Prime if only because its sold out all over but I managed to find it and at an extremely good price. Among reissue Primes, Encore 01 is uniquely different in that Prime's Autobot symbols are printed on rather than needing to be stickered on.

Posted by Heroic Decepticon at 20:28 No comments:

Revisited the same shop I bought Overlord and KISS Player Rodimus from to re-check out something I have been deliberating over: D-93 Scorponok.

After some more onsite deliberation, I decided to nab him. So here it is, today's haul: 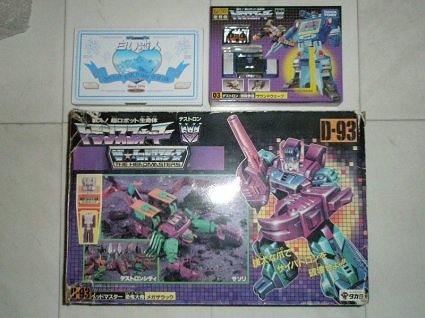 Posted by Heroic Decepticon at 20:45 No comments:

After almost 4 years of searching, I finally chanced upon it.

So what is the 'it' in question?

'It' is a copy of トランスフォ－マ－Ｇ１キャラクタ－大全集. 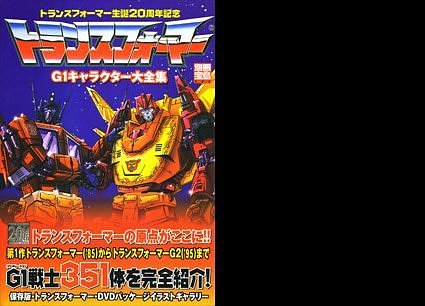 Since 2004, I have searched high, low and down under for this without avail. This book had an extremely limited print run and was quickly out of print probably because it was released in an around the same time as Transformers Generations.

This is a true gem because of some of the treasures within... 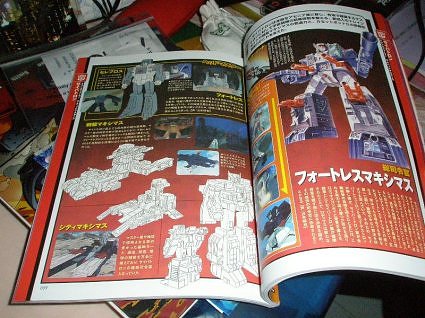 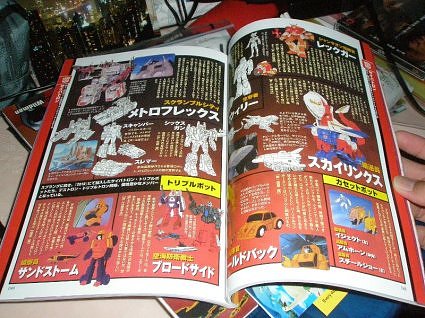 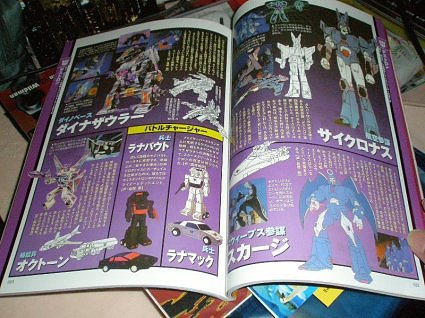 Another all out day at Mongkok, Yau Ma Tei and Tsim Shah Tsui. 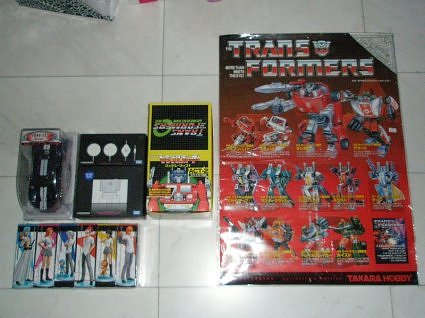 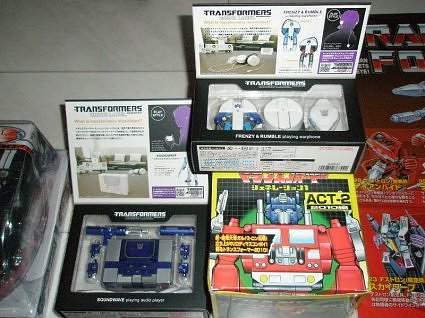 All in all, a really good day if I do say so myself. I am happy to have landed Alt Mirage in USA box for a bargain price (now I can rip open my European box Alt Mirage) and to have found something as 'vintage' as SCF Act 2 MISB and at such a great price. 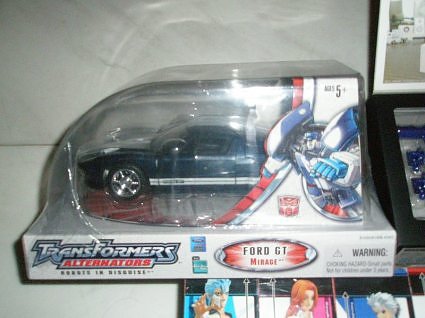 I have over the years bluffed, bludgeoned and begged for this without avail. This is so special because it was only given to dealers who distributed the very first wave of Series 1 & 2 reissues, which were exclusive to eHobby, back in 2001. 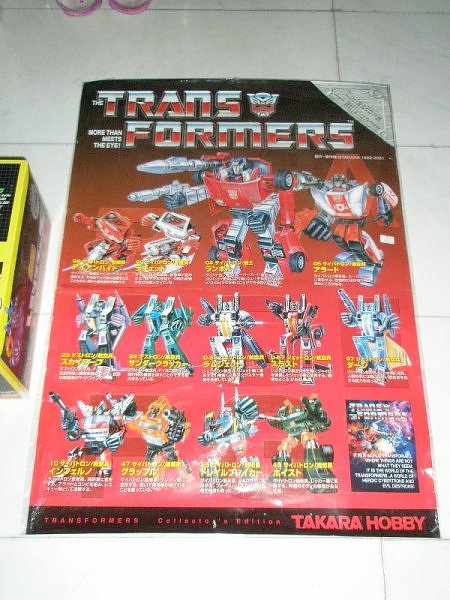 Posted by Evil Autobot at 23:57 No comments:

I just couldn't believe it when I saw it today- a Japanese box MIB Overlord... at an amazingly good price. From my estimation, it is at least 40 to 50% less than what Hong Kong shops were asking for 2 to 3 years ago.

The Takara KISS Player Rodimus, bought from the same shop, is similarly an upgrade from my Alternators Rodimus. 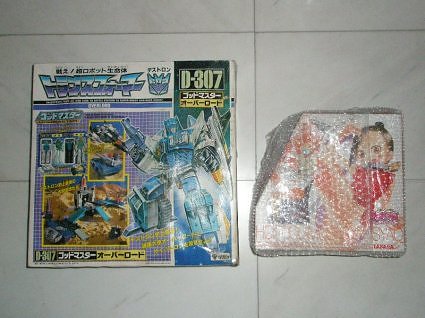 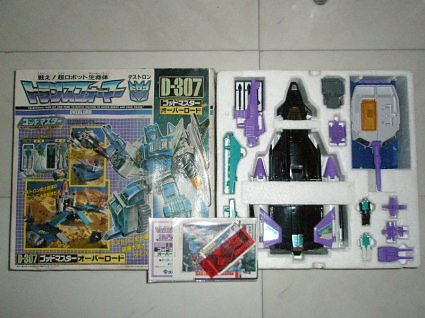 From a Kinokuniya Bookshop along Forest Road in the Shinjuku district of Tokyo comes today's haul- The Transformers Visual Guide. 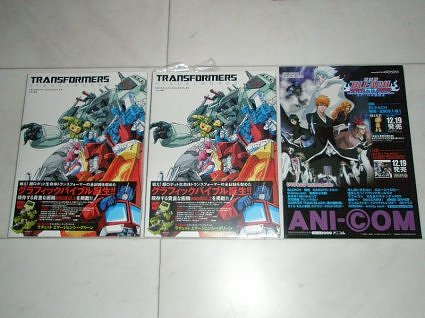 Posted by Heroic Decepticon at 14:05 No comments:

The only reason I was there was to use the toilet.

After I achieved my 'objective' I walked around the Kinokuniya bookshop. What I saw blew me away, big time. There he was in a glass cabinet, so near yet so far, the grand prize for the Transformers Generations competition in 2004- God Primus!

Equally majestic is another lucky draw grand prize, black Tracks, who was standing right next to God Primus.

I so wanted to buy these 2 figures, for whatever the asking price, but our broken and unintelligible Japanese failed to convince them to part with the figures, which were originally not for sale anyway.

Some pictures for me to drool over... 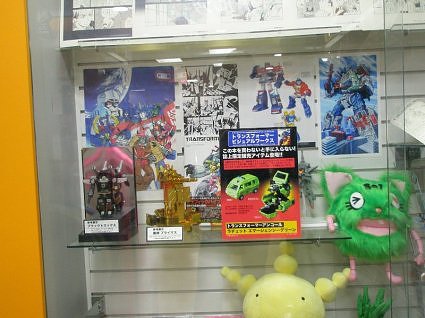 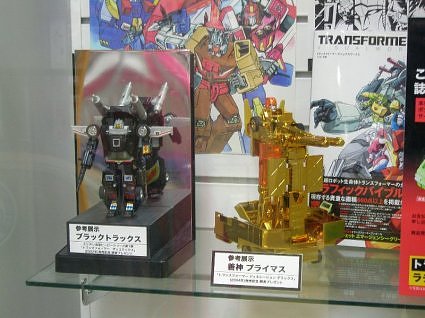 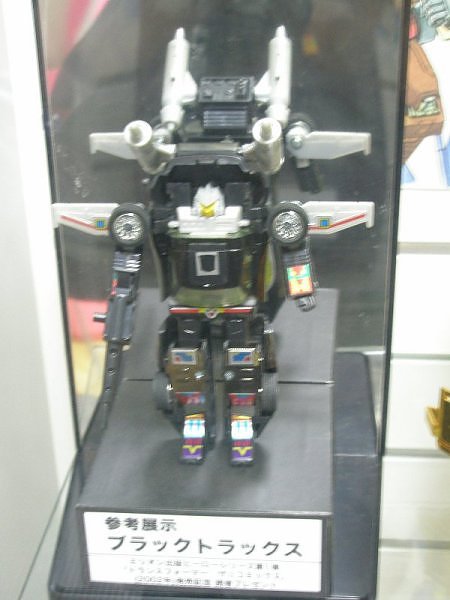 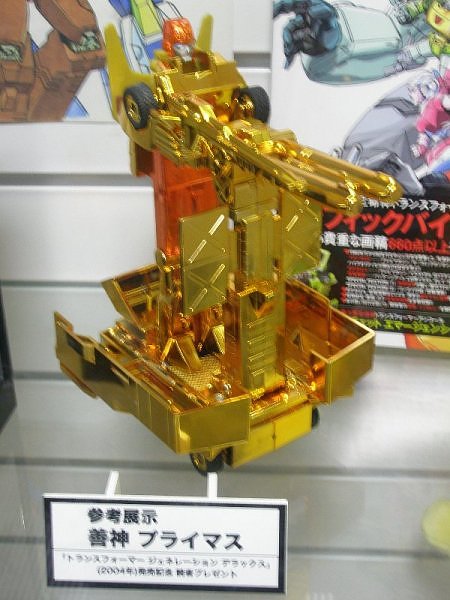 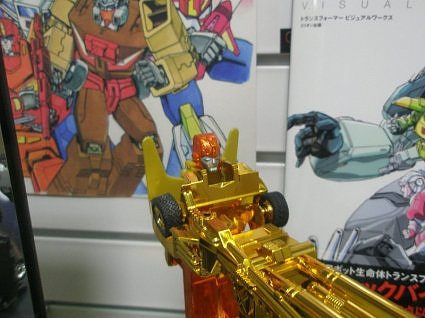 Close up of God Primus
Posted by Heroic Decepticon at 14:01 No comments:

Have a few short days in HK before jetting off to Japan. I had to make hay while the sun shone- the result is the acquisition of many Transformers... 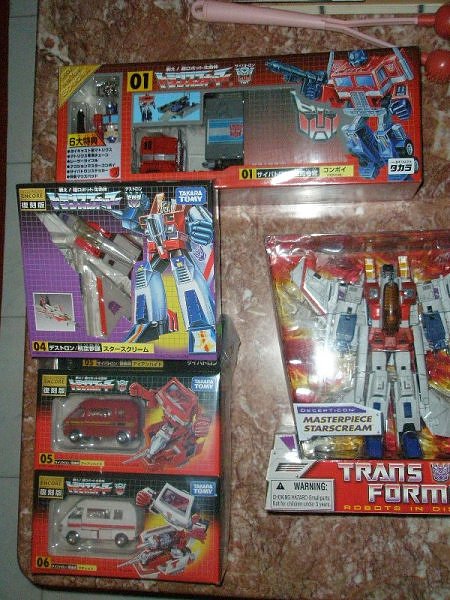 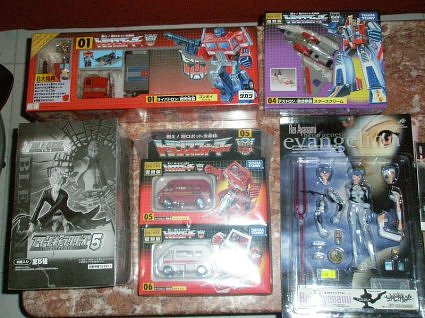 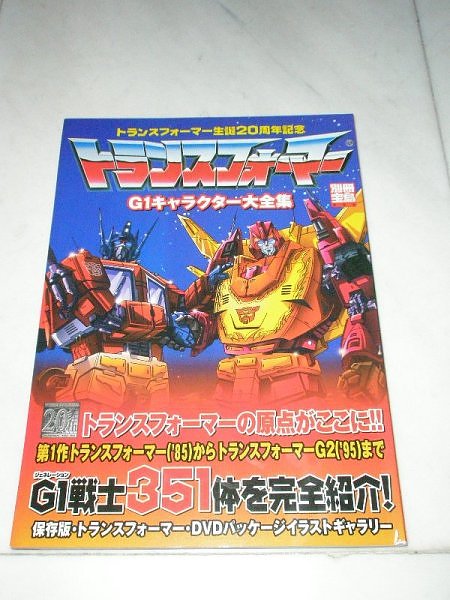 I'm happy to have gotten Bleach Characters Series 05 in a sealed box with all 8 figures (some are repeats) still sealed in their individual little boxes. I paid a meager HK$300 (US$38.40) for the box compared to the US$50 to 60 I would have had to pay for 4 out of the 8 figures if I were in Australia and have to order this off eBay.

***
Highlight of the day: トランスフォ－マ－Ｇ１キャラクタ－大全集

Posted by Heroic Decepticon at 01:32 No comments: