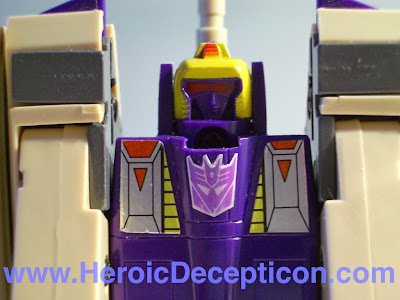 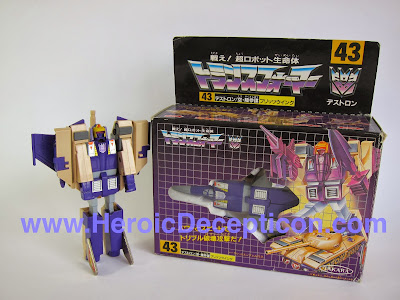 Generations (2013) Blitzwing - this is not a review

The other day, I was rearranging my CHUG shelf because I needed to make space for this-super-duper-awesome-new-Generations-figure...

I cleaned the shelves out a lot, meaning I transformed and kept a number of pieces so that I had space to display new pieces.

I don't think I want to waste more cyber space talking about this toy sucks giant slick beef balls, so I decided to take some shots and show them here. 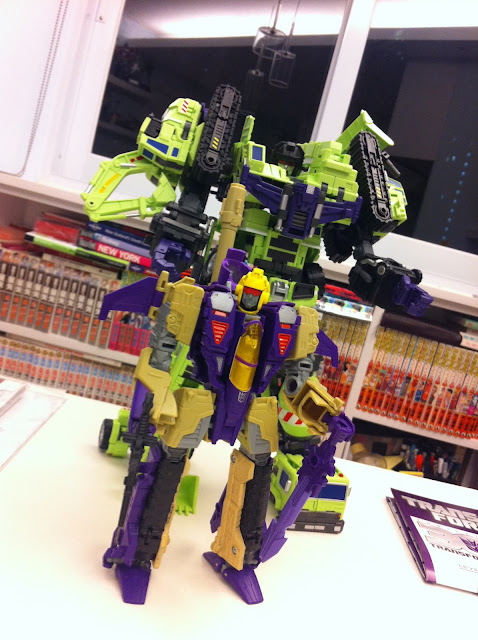 "Take that, you piece of fecal matter!" *stomp!* 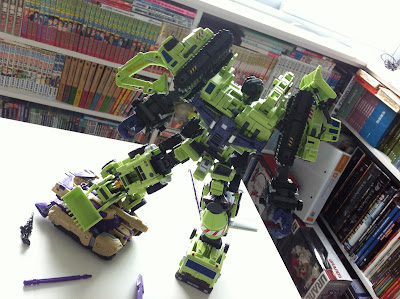 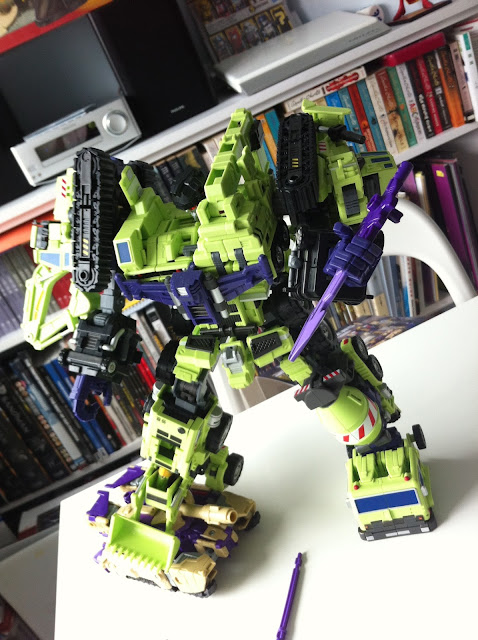 Next, Devastator stabs Blitzwing with his own Electron Scimitar *scene too gory and is censored*

Still on the matter of dinosaurs or Dinobots, we have Takara boxed 27 - Sludge for today's post.
I found it odd that Takara numbered Sludge as 27 after Grimlock's 26. Sure there is no logic to how they would number them, but because in the G1 cartoon there are always referred to as "Grimlock, Slag and Sludge", I always in my mind thought Slag should have come after Grimlock.
This is #4 of 36 from the mega loot. 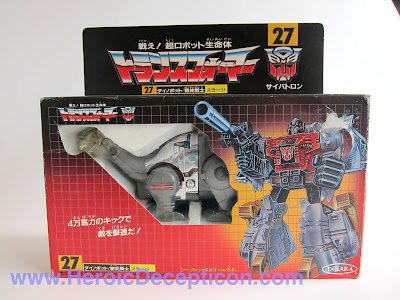 Someday, I'm going to use my super secret ninja technique to remove the sticker residue on the top right of the box. Someday, but not today.
Sludge was one of the Transformer toys that I owned as a kid and so I would always have a soft spot for this guy. I used to love Sludge as a kid - the lumbering giant who is not so bright. In fact, I think he is probably the Dinobot with the lowest intelligence. 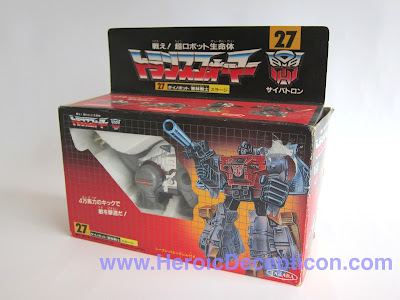 This is another minty MIB piece. I just have a weak spot for G1 boxes, really. 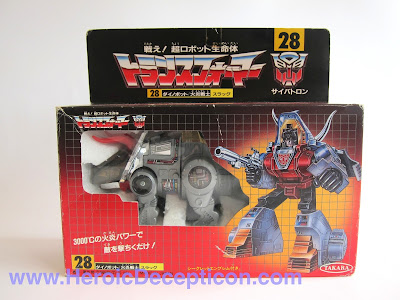 I remember Slag as being one of the more powerful and no nonsense Dinobots. In G1 episodes, he is usually the one that rams enemies down or burn their weapons to... slag. In TFTM, he actually knocked Devastator down when the rest of the Dinobots had little success. Powerful! 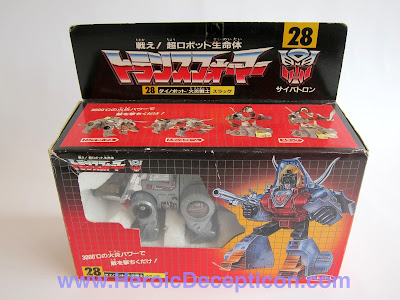 I have always wondered why Slag just walked away after knocking Devastator down. Why not finish the job? 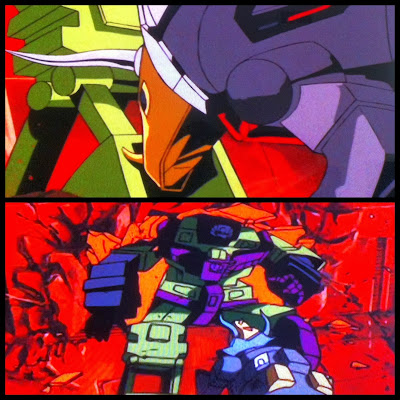 This is the bottom of the box. Very quickly, it can be seen that the toy pictured on the box is quite different from the actual toy in the box. What is pictured is the Canadian red-faced version of Slag with white upper legs - a kind of rare variant, which I talked about here. 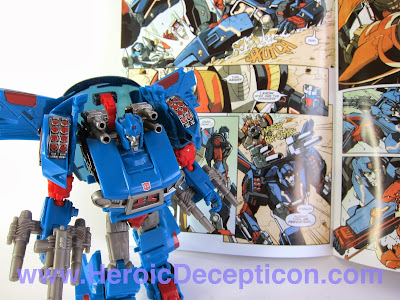 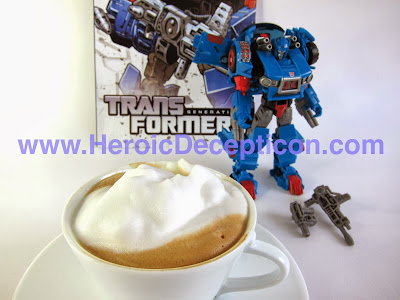 For the weapons segment, I want to talk about just how refreshing it is for Hasbro to finally give us a modern day toy with a sizable compliment of weapons.
Read more »
Posted by Heroic Decepticon at 06:33 2 comments:

Hasbro Generations "More Than Meets the Eye" Skids (#009) - a review 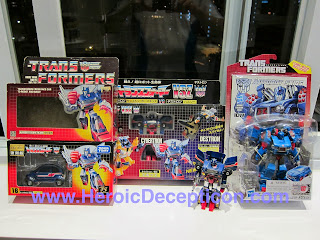 This is the story...

Today, I sold off my TFC Uranos set. Yeah, I know, its all the rage for some, but for me the TFC stuff just does not do it. The design for Uranos was better than their previous combiner, Hercules, but the materials and the construction just leaves too much to be desired. After awhile, I could not tolerate this piece in my collection anymore and sold it on Yahoo HK.

I met the buyer at the toy shop area to pass him his loot, collect my money and then just proceeded to walk around the toy shops.  I know that MMC's Feral Rex parts and also FansProject's not-Brianstorm were still not released yet, so I really was not expecting to find anything.

I walked into one of the trustiest and best shops at In's Point, Action Robo, and saw that they had the next Hasbro Generations wave in stock - Skids was part of the assortment, Skids!!

Wave 3 consists of Goldfire (who cares), Dreadwing (who?), Waspinator (yucks) and Skids (woo hoo!). Well, you can tell I really couldn't care less about the other 3 toys in this wave - I only wanted Skids.

So it was done, shop owner was kind, I got my Skids!

Here is Skids with his other incarnations - Skids USA box, Encore Skids, VSZ Skids (the only way one could get Skids in Japan back in the 80s), USA Skids (loose) and Generations Skids. 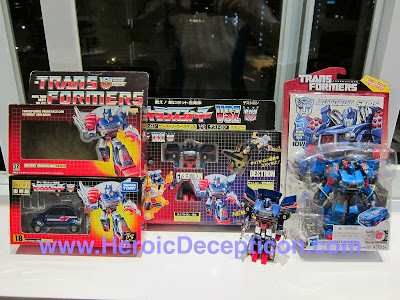 A close up of his Generation One incarnation with his most recent iteration. Generations Skids is based very much on Alex Milne's rendition of the character in the popular IDW series by James Roberts, More Than Meets the Eye. Skids just happens to be one of my favourite characters in MTMTE and I am so glad that Hasbro decided to make a toy of him. 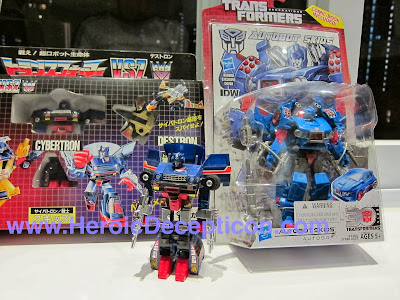 Next thing I'm going to do is open Skids and play!

At least that is the common answer back when I was a kid. I just could not find a little boy that did not like dinosaurs in some way, shape or form.

So, again, I got inspired by Flywheels' blog. Recently, he has been talking about Dinoforce, the robots that make up Dinoking. Since I have talked about Dinoking to.... the .... death, I decided to talk about Dinobots! 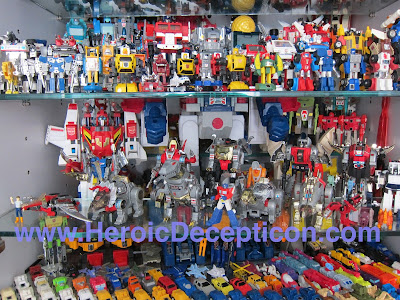 This is #3 of 36 in my massive lot haul. And we start with none other than Dinobot Commander - Grimlock, who is designated 26- Grimlock. 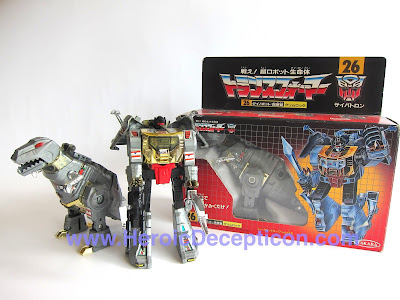 Some boxed shots of this very mint piece. 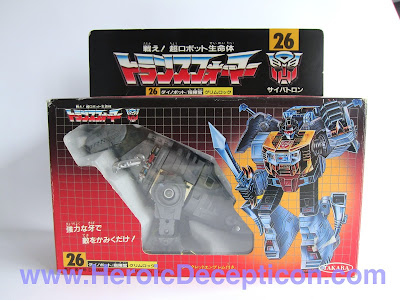 A glimpse of posts going forward... 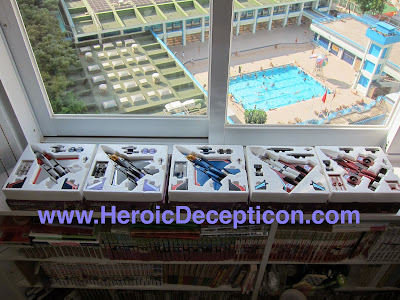 Posted by Heroic Decepticon at 07:52 6 comments: 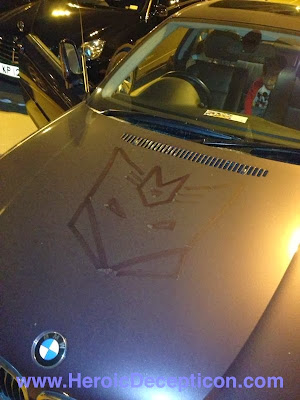 The first thing I gotta say is that these 2 were not part of my loot of 36 G1 Japanese Transformers. 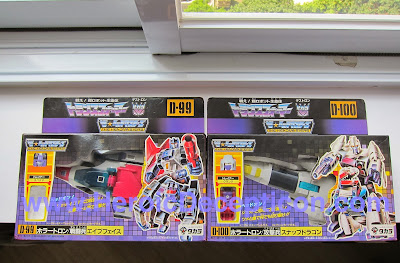 D-99: Apeface and D-100: Snapdragon were bought some time ago in HK and somehow I have 'forgotten' about them and forgotten to write about them here. 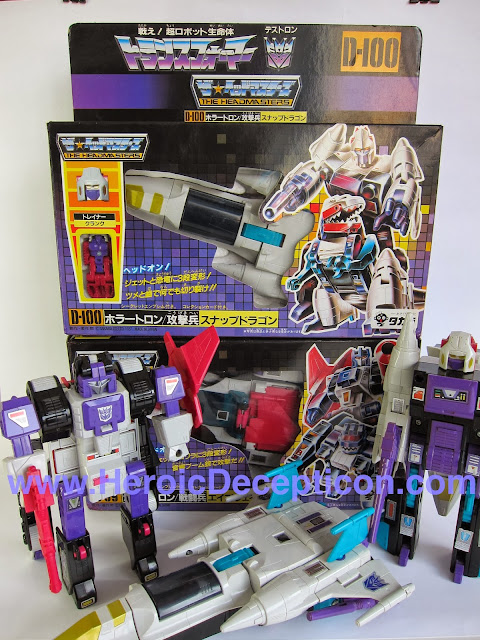 To be fair, they are 2 of the few Transformers in my display cabinets that actually have a dedicated section. So, I'm not being that bad to them. 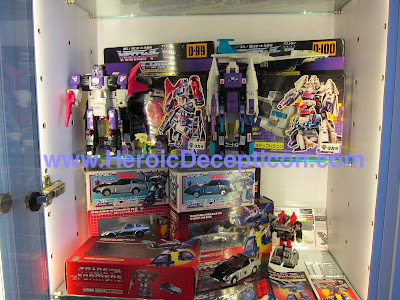 D-99 and D-100 with my Bluestreak dedicated shelf. For more, see here.

For collectors who has been following or reading my blog for sometime, you would know that Apeface and Snapdragon are 2 of my favourite Transformers - certainly my favourite Headmasters, but high on my list of favourite TFs. I have written about them more extensively back in 2008 / 2009, so I will not go into detail here - links to my previous posts are provided at the end of this post.