Rumble is blue Frenzy is red

Rumble is blue Frenzy is red (RBFR) or Rumble is red Frenzy is blue (RRFB)?

This is one of a number of contentious, often discussed but never resolved G1 Transformer continuity issues. I’m going to put down what I believe to be true.

I write this as a more concise response to Botch's article Rumble is Red, Frenzy is Blue. 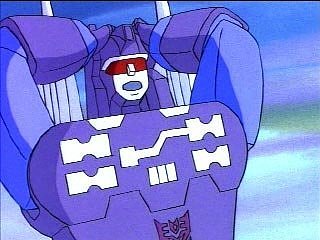 As a kid, I thought of Rumble as blue and Frenzy as red- I advocate RBFR.

In the early years, the G1 cartoons made up the majority of my Transformers exposure- they were the only thing I had to go on, at least for the first one and half years. Since MTMTE, Rumble had been coloured blue (or actually purplish-blue) and that was the colour I identified him with.

Add to this the fact that I continuously failed to convince mummy to buy me a Rumble (red toy) & Ravage set and we have a little me that not only believed that Rumble is blue as animated, but a me that wanted Rumble to be blue because I had a Ratbat & Frenzy set and can ‘reassign’ Frenzy as the more popular Rumble.

Rumble has ever been blue for me, even till this day. I am slowly being convinced otherwise because the new wave of TF comics have taken a stand- they are following what the toy package says and not the G1 animated cartoon.

Interestingly, Seibertron.com lists that the Japanese name for Rumble (red toy) is Frenzy and that Frenzy (blue toy) is Rumble here.

So, while I know that Rumble should be red and Frenzy blue, a part of me, perhaps the child part, still yearns to believe that Rumble is blue and Frenzy is red, RBFR. I am, as Botch would say, 'an illusionist' to the end.

Posted by Heroic Decepticon at 16:42