To me, the comics Blaster is significant because (i) he stands for freedom against tyranny, challenging Grimlock's untenable position as Autobot leader; (ii) he is an extremely skilled fighter and tactician; and (iii) his Electro-Scrambler is a weapon that is as unforgettable as Prime's Laser Rifle and Megatron's Fusion Cannon.

On (i): When Grimlock became Autobot leader and started totally disregarding human life, Blaster chose to be branded a 'traitor' rather than submit to tyranny. He held the firm belief in the right of all sentient beings to be free. This culminated in a sort of coup where Blaster with the support of the majority of Autobots, challenged Grimlock to a duel for leadership. [Events recorded in Transformers #41 (Marvel) or Transformers #174 & 175 (Marvel UK)] 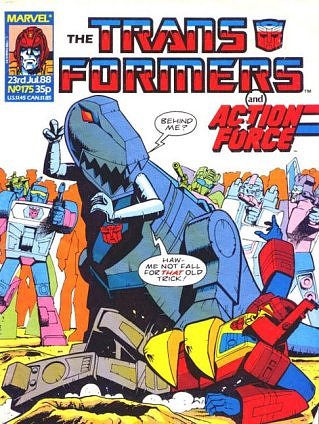 On (ii): Blaster is an extremely skilled tactician and fighter. I would usually interpret the Tech Specs 'skill' score in relation to a Transformers' function; therefore, Blaster's 'skill 9' should normally be intepreted as him being a very skilled Communications Officer just as Perceptor's 'skill 10' means he is an excellent scientist. In Blaster's case, I think his 'skill 9' score together with his 'strength 8' and 'courage 9' can be extrapolated to mean his physical powress in battle as well.

I look to the below scenes as evidence of my conclusion.

Blaster battling all 3 Decepticon Triple-Changers on his lonesome in Transformers #29 (Marvel US):

Blaster trying to fight off Vortex while also trying to protect human life and the safely of the Throttlebots: 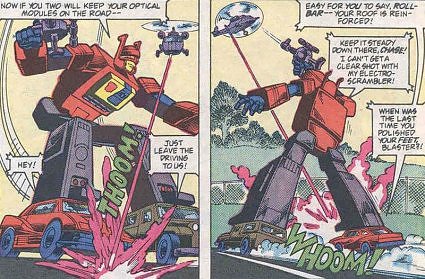 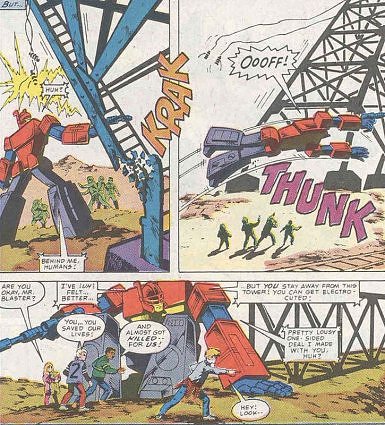 Blaster's 'intelligence 8' may be extrapolated to mean his tactical and planning ability. Among others, here is an example where he tricked a much stronger Transformer than him, Bruticus, to lower his guard and then surreptitiously defeating him. (well, maybe not such a good example because Bruticus is stupid...) 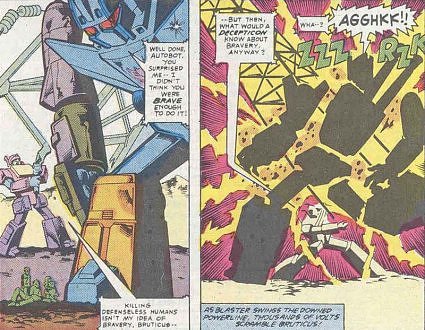 On (iii): Who could forget that Blaster wields an Electro-Scrambler? In 1999, after almost one and a half decades away from Transformers the only weapons I remember were Optimus Prime's Laser Rifle, Cliffjumper's Glass Gas Gun, Megatron's Fusion Cannon, Starscream's Null Ray... and Blaster's Electro-Scrambler. Not only is Blaster's gun mentioned with such consistency, but it is one of the few instances where a Transformer weapon actually does what it is supposed to do rather than just firing generic laser rounds (see comic extracts above).

So, that is tribute 'part one' above.

Posted by Heroic Decepticon at 13:10