This was something I acquired almost 2 months back in July, but I have procrastinated and have not posted further about it till now.

This is the "Matsushiro" variant of Jetfire, one of the sort of obscure G1 variants like Diaclone blue Fairlady Z (aka 'blue' Bluestreak), Diaclone blue chest Swoop, Canadian red face Slag, blue-ear Cyclonus, painted-top Scourge and metal chest Springer, that I wish to obtain.

It is, considered a fairly significant variant to me. 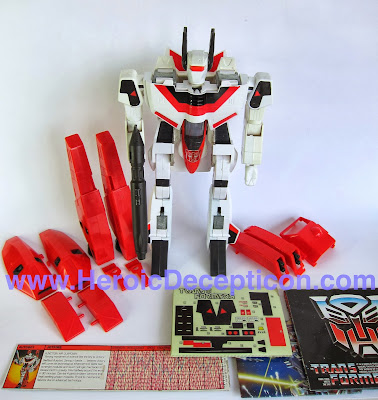 I got this piece unused and in very minty condition from an eBay seller. 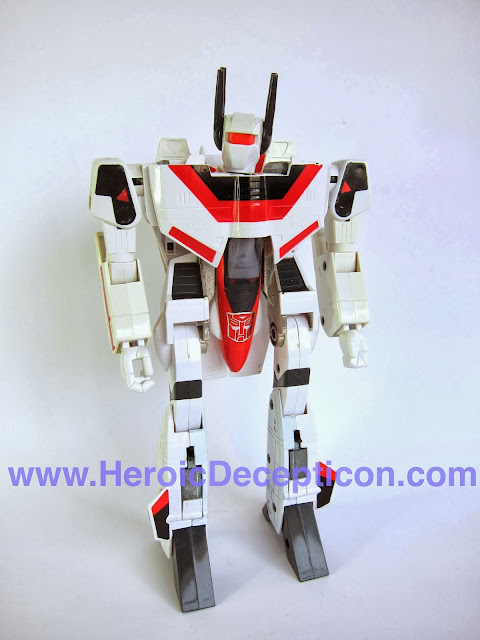 As you will see from above, its only been 2 months since it reached me and it appears to be slightly yellowing in some parts. Photo of when it reached me was here.... and then compare with the shot above.

To be honest, it is unfathomable why it would yellow after being with me for 2 months, where it had been with the original seller for 20+ years and not yellow. In fact, this is the THIRD Jetfire I have that had yellowed after being shipped internationally. My original bone white piece yellowed almost completely after I freight-forwarded it (together with a large batch of Transformers), when I was moving countries.

I'll chalk it down to pure bad luck and yet another of my Jetfires is going to yellow. Something sinister is at work here, I swear. 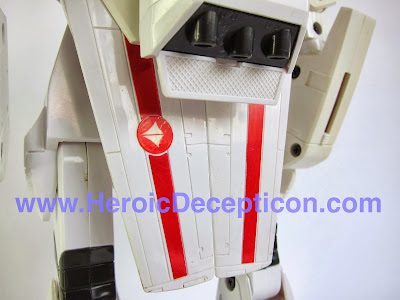 So, back to the specifics of this version of Jetfire. This is the eBay seller's description:

It has the "Matsushiro" stamped underbelly, the original painted line cockpit, the raised circle on the upper booster pack as well as t booster pack lock tab, the higher up the nose cone Autobot Emblem placement, the darker red paint and slightly off white/cream AB rub sign on the Jetfire headpiece. What is does NOT have, is the grooved head antennae, and 2nd, smaller sticker/decal sheet the Ma the 2nd to last crossover Matsushiro, before Hasbro went to to the Bandai version Jetfire full time. (there was 1 more version of Jetfire, one, with a "Tm" stamped box, in which the toy finally exhibited the Bandai stamp and mouldings overall, as well as the NON painted still possessed the WHITE booster pack lock tab).

This particular loose Matsushiro Jetfire Set is in C9+ overall condition. The Jetfire toy itself is a solid C9+, is exhibits 0 yellowing, no points of wear other than a slight rub to the tip of the nosecone's red paint. Please note, the Matsushiro stamped Jetfire's are exceedingly rare and were some of the FIRST to ever hit the market in 1985. Therefore, their paint, and plastic were not NEARLY as shiney, or BRIGHT the later Bandai Jetfire's most of us got as kid's for Christmas. Their paint is darker, slightly less flossy, and their plastic is a natural white/bordering on cream color. If you were lucky enough to get one of these, you possess what many collectors consider to be one Transformers out there, much like the Pre Rubsign/no grey border 1st run Autobots and Decepticons or the TM Dinobots.

Additionally, the Original Red Armor is 100% Complete and totally UNUSED with NO wear, no stress marks, and no cracks. The sticker/decal sheet, and catalogs are present, 100% complete and MINT as well. 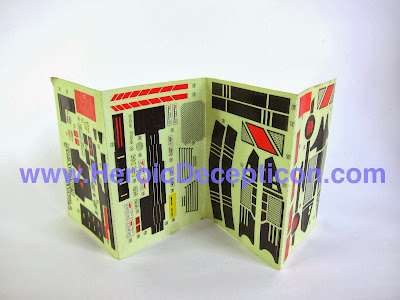 And for good measure, the sticker sheet. I initially fully intended to apply the decals to this Jetfire, but seeing as its now slightly yellowing, I might wait for another better sample to turn up before applying the decals... sign.
Posted by Heroic Decepticon at 20:18