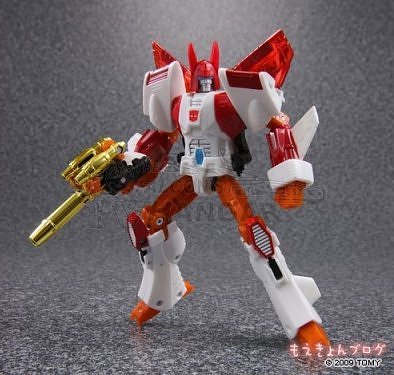 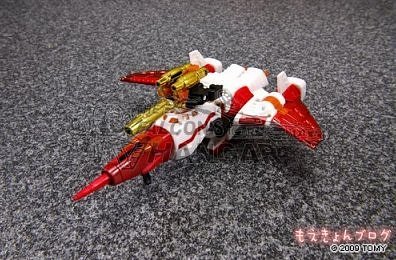 I wouldn't pick it up if it were throw my way. Certainly would not go to the trouble paying an arm and a leg to get it since it is an exclusive.

The most economic place to get this is probably Falcon's Hangar from Singapore, but even there its priced at SGD$150. Perhaps the only thing I like about this figure is its back story, which I must say is pretty innovatively tied into the G1 mythos and even utilises the fact the the Technobots were constructed within Unicron. Cyclonus was (re)constructed by Unicron. So, there is some resonance in using the Henkei Cyclonus mold for Strafe (the only Technobot that transforms into a plane anyway).

Here's the back story (mirrored without verifying veracity from OZFormers):

"Even now, the Cybertrons' new weapon, the Techbot Corps, is throwing itself into battle with the Destron Army. Suddenly, their sniper Strafe takes the full brunt of an attack and something extraordinary occurs.

The whole corps had maintained the coloration from their original forms, but their outer appearance was completely different. Every member of the Techbot Corps had long ago been reborn from the wreckage of Transformers who had fallen prey to the destroyer of space (uchuu no hakaisha), the Space Emperor (Seikanteiou) Unicron.

Now, according to the research of the Cybertrons' base computer, Teletraan 2, it seems Strafe has somehow returned to his original form. To a worried Supreme Commander Convoy and the rest of his fellow Techbot Corps members, Strafe says merely, "I feel younger than ever, and I'm aching to fight!".

Strafe has now regained the aerial speed of youth, clocking in at almost 1.8 times as fast as his old body! Let us follow the courageous Strafe's example and sortie!"

Ok, to a certain extent, that makes sense.

The colours are horrid. And look at that head sculpt. How could this, even remotely, pass off as Strafe? 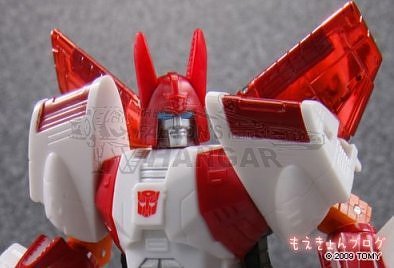 "Hi, I am Henkei Strafe and my head-sculpt looks terrible and I come with a Targetmaster partner that is made of blink." (picture mirrored from Falcon's Hangar)
Posted by Heroic Decepticon at 21:50