Why was it awesome? Answer: Optimus Prime vs the Predacons (and Predaking!).

Got me thinking about Predaking and how there's this particular picture of the guy I've been fascinated with since the 80s. It was an illustration from a Japanese pocket book which was a gift from my classmate. I have no idea as to the picture's origin- the book is the one and only place I've seen it.

In that picture, Predaking appeared to be trying to get snuff out Blurr, Arcee and Wheelie in order to get to an objective they were trying to prevent him from reaching.

This is the picture: 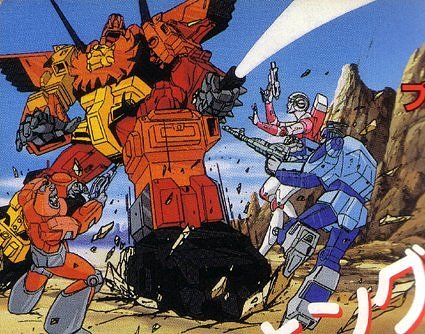 To me, this is such a great picture because:

[1] the action is so dynamically drawn, it becomes quite alive in my mind every time I view it- Predaking stomps down using the foot that is Tantrum, the ground quakes, rocks fly, the 3 Autobots are thrown off balance while still trying to keep their aim, Predaking now 'fires up' his ahem light saber... The action does not stop with the picture, the mind finishes each characters' movement, connects it to the next, they continue to lose balance, Predaking advances... ;

[2] Predaking and all the other characters in the picture were drawn in their exact G1 representations- just as Floro Dery had designed for the Marvel Universe profile books. I do love the way artists are drawing Transformers now, but they generally tend to be too blockish, too chunky and overly sophisticated and less anthropometric than desired- in short, they lack the simple grace and 'human-like' qualities that so characterizes Floro Dery's G1 Transformer designs; and

[3] Predaking was not using Razorclaw's sword but something that appears like a light sabre! And it appears to be just shooting out at the exact moment Tantrum comes into contact with the rocky ground. I've always managed to hear the distant light saber hum whenever I look at this picture.

Now, look at the picture again.

Posted by Heroic Decepticon at 21:18