Issue #04 was packed with easter eggs and G1 tribute moments. I attempt to record some of them here.

Fusion Cannon
I think its fair to say die-hard G1 fans grew up with the notion that Megatron always had his fusion cannon. Here, we see how, why and from whom he got it from- it was, ironically, a gift from the treacherous Starscream! 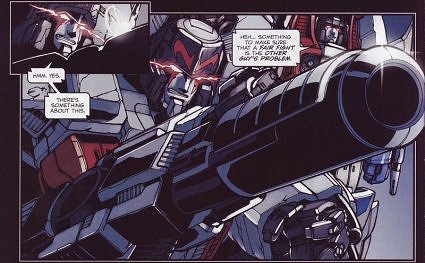 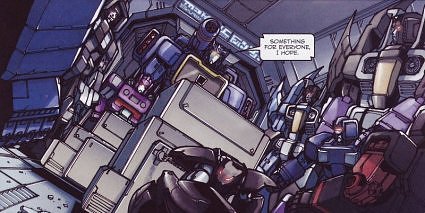 A TFTM moment
There prima facie isn't anything special about this panel until I quickly recognized how much it reflected the moment in TFTM when Megatron and Starscream were conversing after decimating the crew of the Autobot shuttle.

There are certainly a lot of similarities in terms of the way both are laid out. 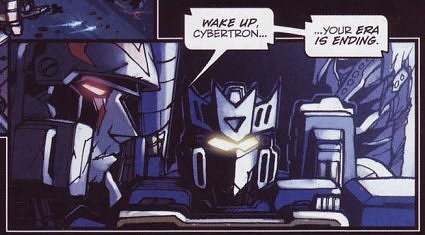 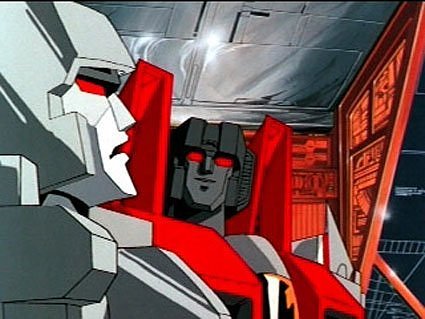 The Cybertronian social life
An insight into how Cybertronians enjoyed life and socialized before the first great war and before factions. The ladies seem to have pretty interesting headgear... kind of like Melbourne Cup day here.

This at least confirms 2 things in IDW's TF continuity:
(1) a flying Transformer is rare among Cybertronians, as is also alluded to issue #03 when Megatron specifically asks Soundwave to source for 'flight-capable combatants'; and
(2) Autobots generally cannot fly.

This gives an added dimension to my theory in Autobots can't fly, can they? 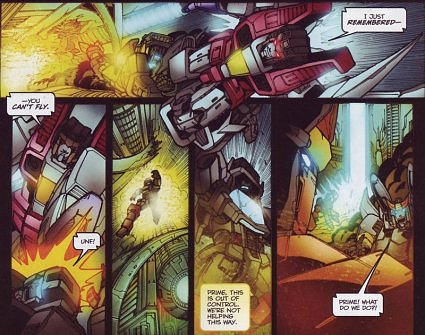 ***
The origin of Ratbat's mode
Ratbat was not always a cassette, that is, before he was betrayed and made into one.

This here actually made me think that Dreamwave's War Within vol. 2 & 3 does not fit into IDW's continuity. Here is why:

If Ratbat is already a cassette before the first great war, then it is unlikely for him to have the robotic mode he had during War Within vol. 2 (see issue #02), and then later have a cassette mode again during the regular G1 continuity. What I'm saying is that, it is unlikely, but not impossible- after all, it would hardly be fuel efficient to keep morphing from one mode to another.

It is reasonable to assume that he became a cassette here, which is before War Within vol. 1, and remains as one. At the very least, it casts doubt on whether elements and plot points from War Within vol. 2 (and vol. 3) are to be considered part of IDW's TF continuity. 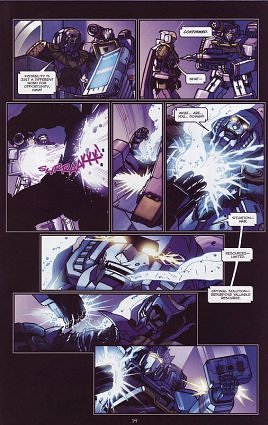 That's a wrap for the first part (of 2) of issue #04's easter eggs. Gosh, there are just so many of them this issue that I had to split them into 2 parts. Next, I will look into the final part of Megatron Origin and the formation of the fearsome Decepticons!

***
And a little shameless advertisement:

The next series of articles will be on...

Posted by Heroic Decepticon at 20:20