I picked up mine on Saturday from the shops - gratuitous photo on the right.

The key question in my mind and, I guess a vast majority of collectors' mind, is "Why should I get yet another seeker mold?"

I already have MP-03: Starscream (aka 'greenscream'), Masterpiece Starscream (with Japanese Takara sticker), MP-06: Skywarp and MP-07: Thundercracker. That's like 4 of the same mold - do I need another?

And my answer turned out to be a 'yes'.

Because MP-11 is molded differently. For starters its done away with the hateful and honestly silly hip-fins that the designer thought would double up as samurai scabbards (wtf right?). The poorly designed feet which made it very difficult for prior seeker molds to balance on the gound without the supporting stand, is fixed for MP-11. The kibble in robot mode that hangs off the jet air-intakes are also removed (how I hated these, always pops out when I try to transform the jets).

MP-11 fixed almost all the little things I disliked about the previous seeker mold and also gave Starscream a new, more G1 accurate head-sculpt. All are big plus' in my book. Also, the inclusion of a proper crown and cape means I can junk the third party (not so great quality) crown and cape set. It's all good. E likes this piece too. 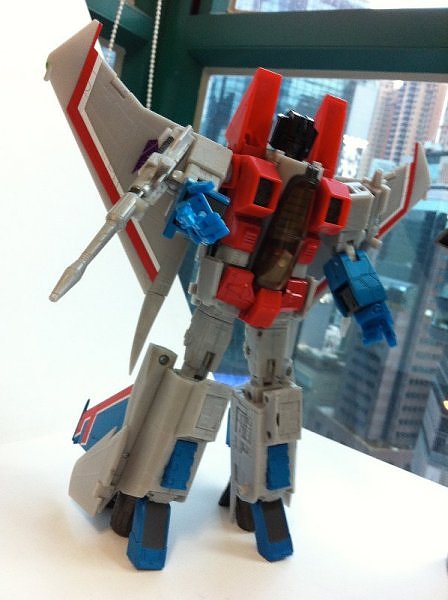 I read that there was some fan-rage about the colours and the shade of grey. I personally think that both are fine and that the grey kind of matches his G1 grey colour and is a shade more accurate than the white of Masterpiece Starscream (anime colour one).

'My fellow Decepticons...' (the armless Jetfire has his limbs in a H2O2 whitening jar... heh) 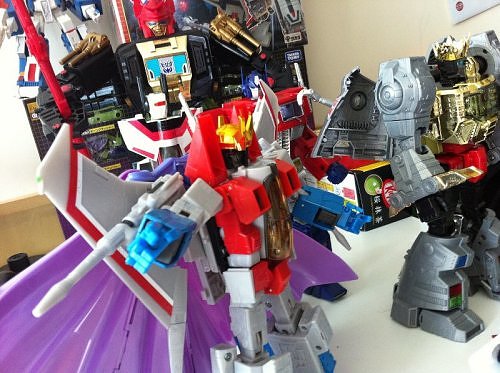 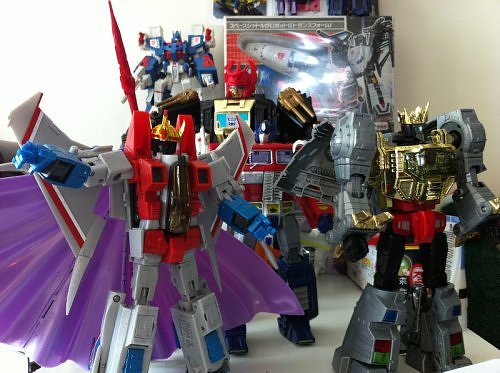 'It's all about the pain Grimlock... you sure you are not joining us?' 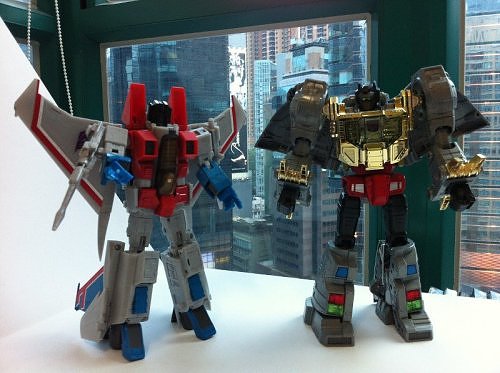 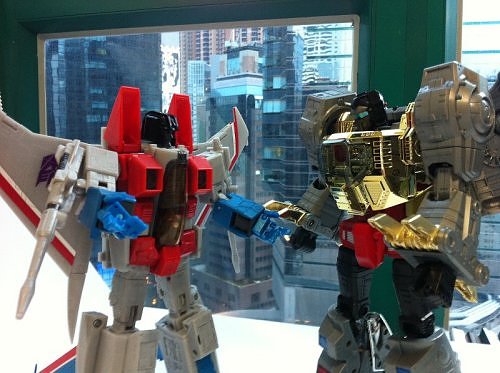 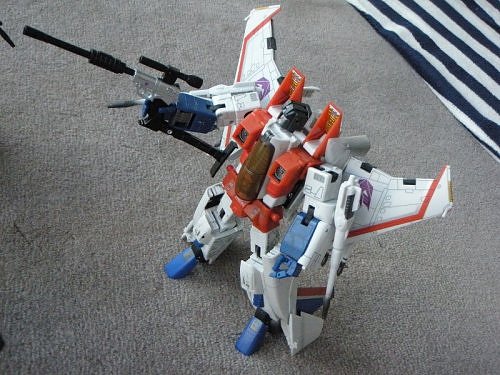 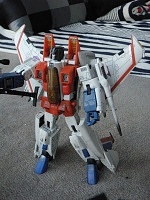 Close up of upper body - the colours look good, no? 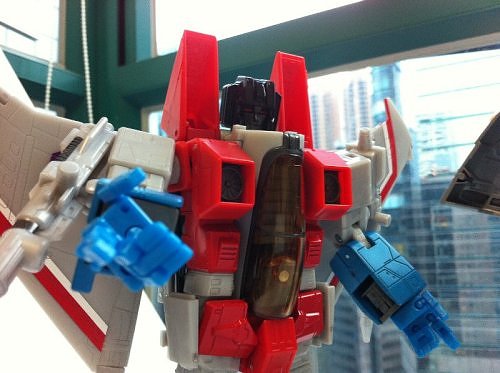 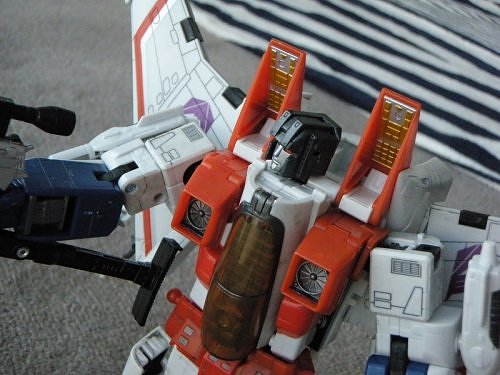 Close up of this new marvelous head-sculpt 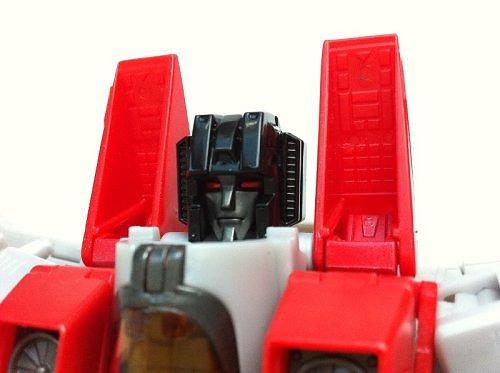 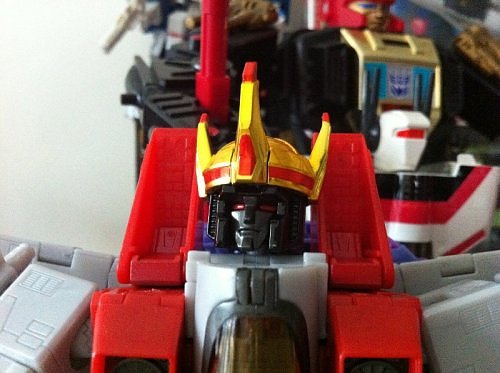 Another shot showing the more of the crown. This crown is so much nicer than the third party version and is more detailed, fits the head better and all. 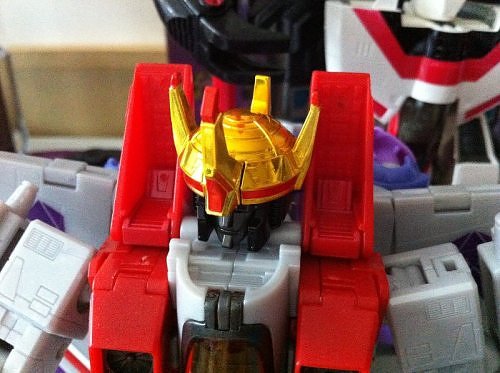 Overall, there is enough in there that makes this figure more G1 that has pushed me to get it. Although if one already has all the existing seeker molds, it's be a huge ask to also get this figure. I do like this figure lots and think it is easier to transform than the previous seeker mold.

My 3 major criticisms for it are: (1) it does not include the 'short' heat seeking missiles of the previous seeker molds. Therefore, the robot mode null-rays doubles, quite inappropriately for a masterpiece, as missiles in jet mode - Takara, this is just plain LAZY. (2) it does not come with the stand that came with all prior seekers. (3) the box is bigger than it should be, probably to charge a higher price (I don't know for sure) - there is so much air in the box. Pretty sure they could have made it more compact.

If price point and space is not an issue for you, this is a figure I'd recommend to G1-cartoon accurate enthusiasts. 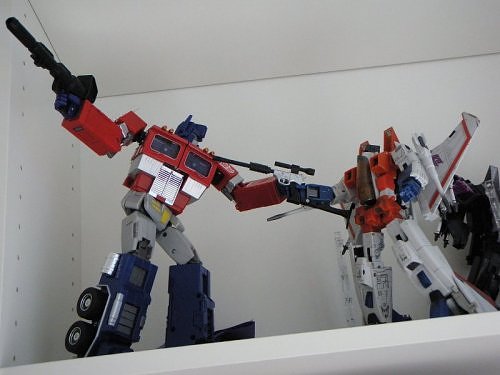 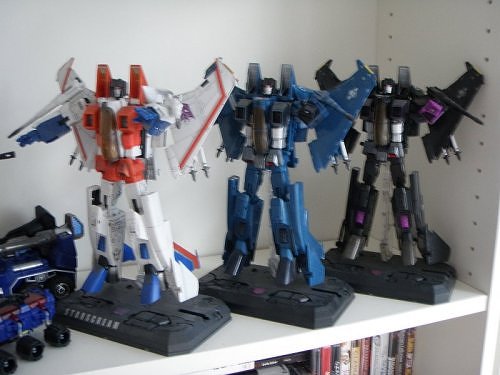 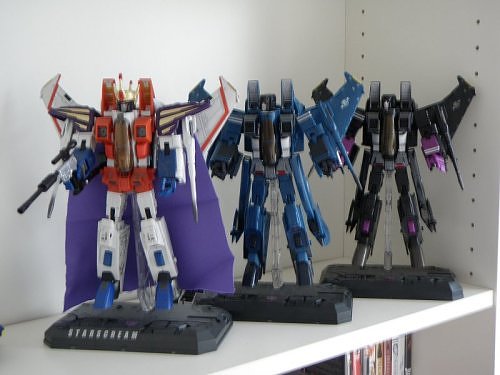 Posted by Heroic Decepticon at 14:07