Issue #02 was packed with easter eggs and G1 tribute moments. I attempt to record some of them here.

*Spoilers from this point forward*

Megatron versus Cy-Kill
What can I say? As mentioned here, this is a great moment. Megatron going against Cy-Kill for real and its not some obscure thing in the background like the damaged Cy-Kill in Dreamwave's Transformers Armada #16 (page14, panel 1). 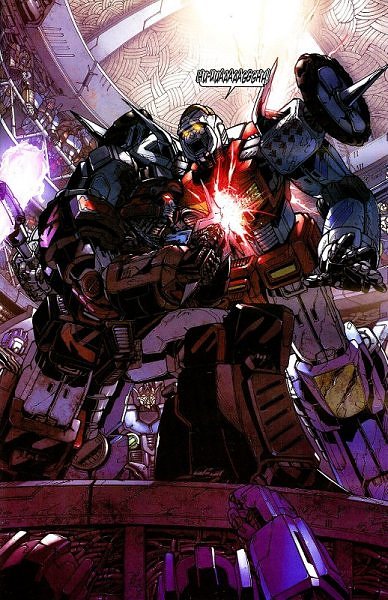 Megatron versus Cy-Kill in gladiatorial combat

The Audience
Here (from left to right), we see unknown (probably Go-Bot), Spinister, Sunstreaker, Slugslinger and, interestingly... a Transformer that appears to be Overlord.

From the comparison below, I am, myself, quite convinced that the guy on the extreme right is indeed Overlord. If that is correct, this would mark his first ever appearance in US continuity perhaps even foreshadowing his future role as the Decepticon Ambassador of Destruction- woohoo!

Left: Robot suspected of being Overlord. He has a distinctively similar headsculpt with the Overlord toy (right). He even has a 'cone' on his shoulder like the toy.
Right: Head close up of Overlord toy.

The beginning of the Predacons' ascension as the Decepticons' elite cadre of hunters and crack strike team perhaps? 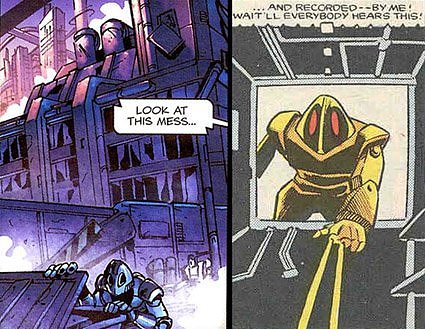 An empty
This here (top picture) appears strikingly like an empty from the Dead End region of Polyhex- not just any empty, but the empty that supplied Blaster with the whereabouts of Scrounge! (bottom picture) 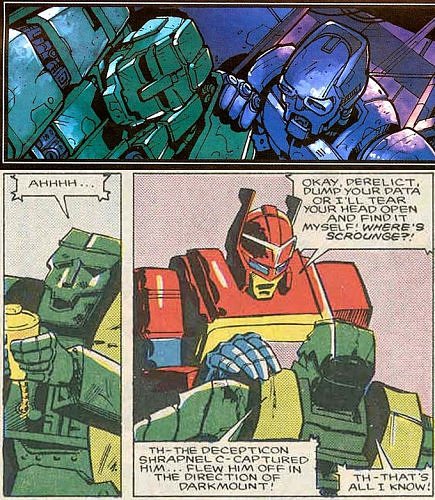 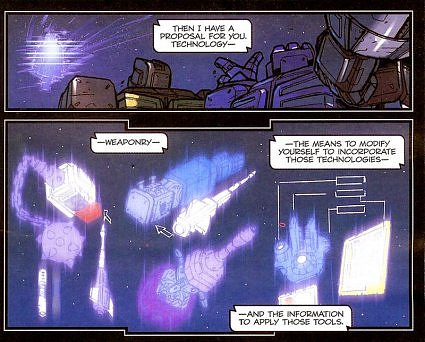 For me, the highlight of this issue is definitely the Megatron- Cy Kill fight at the beginning- that in itself is worth the dollars and cents I shelled out for this issue.

That's a wrap for Issue #02 in terms of easter eggs, links with G1 and other little conclusions.

Posted by Heroic Decepticon at 21:41