This is the second part of the issue #04 easter egg hunt.

Megatron's inspiration...
So the million dollar question- how did Megatron coin the term Decepticons for his band of renegades? (pun intended) 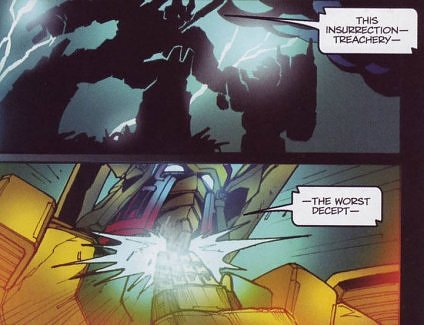 The best line...
This must be one of my all time favourite lines in the entire series: 'I will create desolation, and call it peace'.

It even trumps my favourite Megatron line from Transformers: Infiltration (issue #06) where on Starscream's bidding, Astrotrain, Thundercracker, Runabout and Runamuck wanted to take Megatron on and he said to them- 'You will stand down. If you fight, you die... In the end you are all expendable. Choose'.

'I will create desolation, and call it peace'; it has a ring that sounds like
'Peace through tyranny'...

... which is Megatron's motto from his G1 Tech Specs. That is his vision for Cybertron, for the Decepticon cause. I need look no further than why old kings fight wars, in particular the reason why the first emperor of China united the 3 warring Kingdoms (the gist of the movie Hero is an illustration)- it is to unite all dissenters, even if it means tyranny, to bring about stability and peace. This is not my view but is certainly attributable to them.

It appears that the intent is not evil. It may be ignoble, but it may not evil in the malevolent, nefarious sense.

Eric Holmes managed to plumb the very depths of Megatron's motivations, go to the core of his very character, and in doing so tied it inextricably to G1. If anyone accuses him of not knowing Megatron, this is the line which he should hit them in the head with. 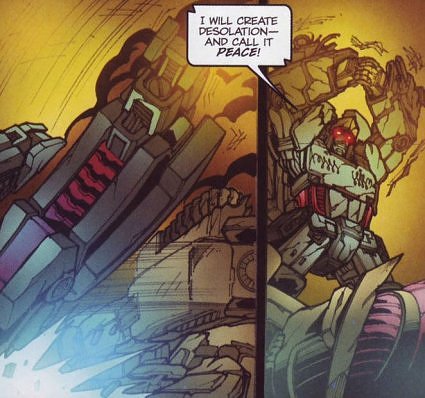 Decepticons by choice
And... on the last page of the last issue, the Decepticons are officially formed. So begins the first Great Cybertronian War.

It may be a retcon, but its a pretty darn good, and I think it works, and I like it.

Posted by Heroic Decepticon at 21:57