Continuing from the introduction, I am penning the history, the origin, of how this figure came about because it is of great interest to me.

I first 'heard' about this figure from Seibertron.com and on seeing the test shot pictures, immediately pre-ordered mine from Hobby Link Japan.

Metalverse Hot Rod was released in October 2007. It is licensed by Tomy Takara, designed by Hirofumi Ichikawa, sculpted by Yuho Koike and manufactured by Daiki Industries. It was mailed to me direct from Japan on 18th October 2007 and I received it on 22nd October.

I am extremely intrigued by how this figure came about. So, here it is, the 'origin' of Metalverse Hot Rod.

Metalverse Hot Rod will be released by Daiki Industrial this September. It was originally planned and sculpted by Yuho Koike and designed by Hirofumi Ichikawa, who performed those same duties for the production of the Metal Force Optimus Prime vinyl figure from Time House.

MF Optimus Prime was first released at BotCon Japan 1998 and was one of the pioneers of large-scale TF figures that didn't transform, but instead precisely reproduced the characters' animation designs for adult fans. It was also the first Optimus Prime figure to come with a laser axe and Matrix, accessories which would be included with several subsequent G1 Optimus Prime toys.

After MF Optimus Prime was released, Time House had plans to release a Megatron figure, but this was ultimately canceled. After Mr. Koike left Time House, he made plans for a new figure of his favorite character, Hot Rod. He started sculpting it on his own time and finished the prototype in 2001.

'To make the project a reality, we began protracted negotiations in America and Japan with the help of many TF fans. However, the trends of the time were not on our side, so we had to be patient and persevere for five years, until our chance finally came. Following the merger of Takara and Tomy, we were lucky enough to receive permission to release the figure as a licensed toy in Japan.'

Mr. Koike devoted himself to making it as accurate to the original animation design as possible.

In the early days of animated cartoons, especially robot shows such as Gigantor, for which they had to animate purely imaginary objects, studios had three-dimensional models made as examples of the proper character designs so the animators could look at them from various angles and draw consistent images. These were known as "animation reference models." Toei, the Japanese animation studio which worked on TF:TM in 1986, used such reference models in '60s.

The goal was to make this figure as close as possible to one of those models. Thus, toy designer Hirofumi Ichikawa checked and researched the images of the character in the show from many angles and compared them with multiple original design drawings. Some images included mistakes, while others omitted lines to save time in animation, so he analyzed many aspects of the design to choose, edit, and extract the true or ideal lines. He also took care to minimize any individual modifications to the design. He then finalized the revised design as the greatest common denominator of all the images he'd analyzed.

'After six years of effort, this is something like a dream come true for us after. You can be sure that we, too, are all looking forward to this figure becoming an actual retail product available on store shelves. If you have Metal Force Optimus Prime, please display Hot Rod with him.'

The above is an excerpt of Doug Dlin's (apcog@hotmail.com) translated text, which I've first seen posted on OZ Formers.

***
I'm very amazed that it took 6 years of courage, perseverance and unyeilding dedication before the designers were able to see their work mass produced.

Hmmm... I actually don't have the Metalforce Optimus Prime that is designed and sculpted by this very same team. I do have a bootleg version bought in 2002, but I cannot imagine having that stand next to my Metalverse Hot Rod. It wouldn't be worthy. It would be sacrilegious. 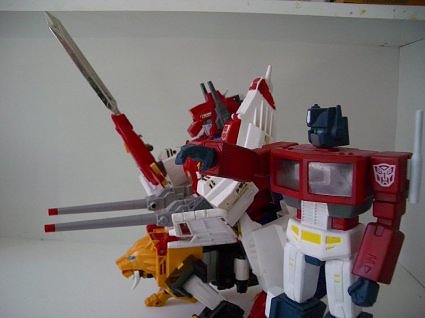 Now that I think of it, perhaps it's time to hunt for a Metalforce Optimus Prime? Maybe? No? Yes?

Next: My reasons for Metalverse Hot Rod