My disdain for Rodimus Prime have probably been made known on more than one occasion. Two occasions exist on this site alone- Why Wheelie?; and Why not Rodimus?

Seeing as that being the case, writing this article about my fascination with Metalverse (MV) Hot Rod would be wholly inconsistent and out of character. Still, its happened. And I found it rather odd.

I found it rather odd that I was (and still am) so enamoured with the MV Hot Rod. By rights, I should dislike Hot Rod as much as Rodimus because it is in this earlier incarnation that he interrupted Prime and Megatron’s fight leading to the demise of the former.

Now, I have to qualify my infatuation with MV Hot Rod, to myself at least.

These are my reasons:
So there it is, my justification for liking what is otherwise a character I've loathed since 1986. And just 'cos I like MV Hot Rod so much, this is a gratuitous shot of him... 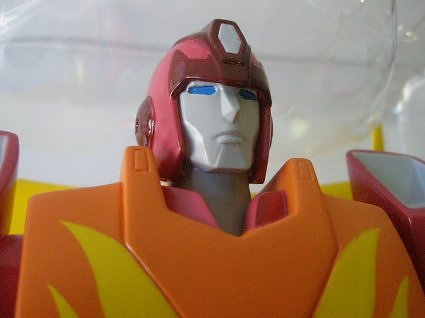 Posted by Heroic Decepticon at 19:58