On 12 October 2013, I received a surprise package from a buddy collector friend. It was a good surprise for a weekend and I talked about the contents of the package in my post here. 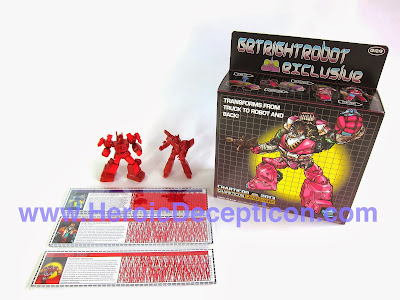 For this post, I want to focus on some particular items in the package – the Charticon exclusive custom Tech Specs! 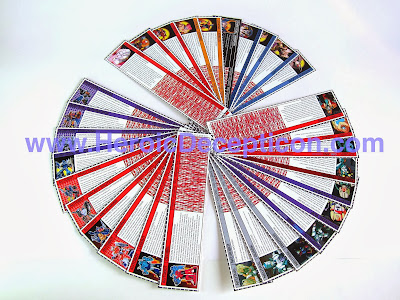 Look at these wonderful slices of (neo) history

Before going any further, I would like to say that these look and feel just right – they are excellent representations of Tech Specs and have an unmistakably G1-esque feel to them. 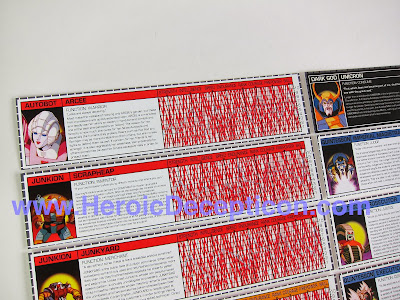 Meticulously designed and laid out to be reminiscent of G1 Tech Specs.

These were created by Arkvander for the purposes of Charticon and he has written extensively about them here. They were used as sort of 'door gifts' that were blind packed and then later offered up for sale.


In Arkvander's words...
“My original idea was to make them a Friday-night only (we had a patio party on Friday night) give-away but I decided to offer them up to anyone who wanted to purchase them on Saturday and Sunday. I created three different sets and "blind-packed" them so when we handed them out people wouldn't know which set they were getting and then they would come back on Saturday or Sunday to purchase the other two sets they were missing. Or they could trade and swap them baseball card style for the ones they wanted at the Friday night party.”

The 3 different sets of Tech Specs were:


This is the Japanese Generation 1 set. It contains 10 Tech Specs - 6 Cybertrons and 4 Destrons. 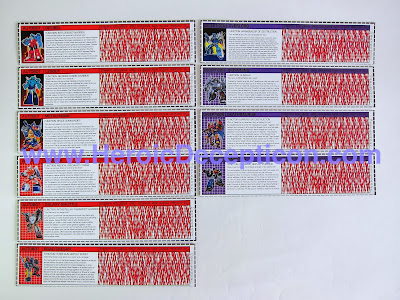 
Close up shot of the Jap G1 custom Tech Specs 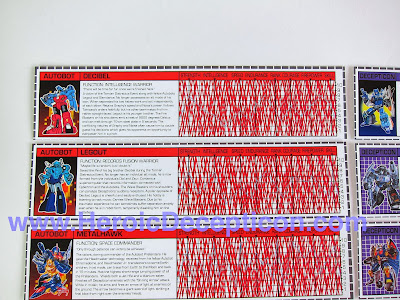 This is the MTMTE set. Custom tech specs for IDW's More Than Meets the Eye comic characters, of which many do not even have toys. This set consists of 4 Autobots, 3 Decepticons and 3 neutrals.


A close up of the Autobot portion of the Tech Specs. 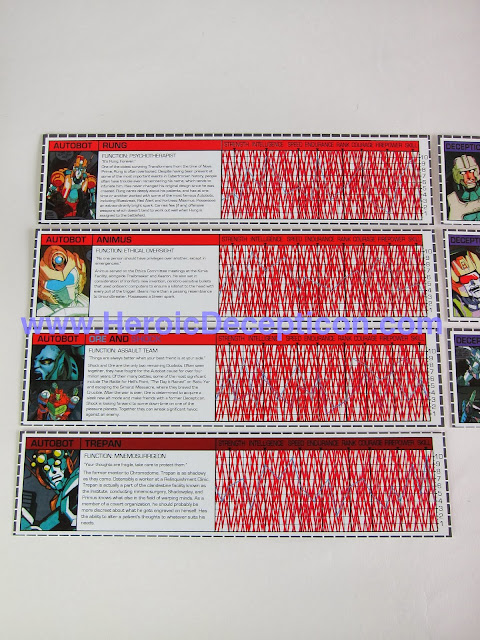 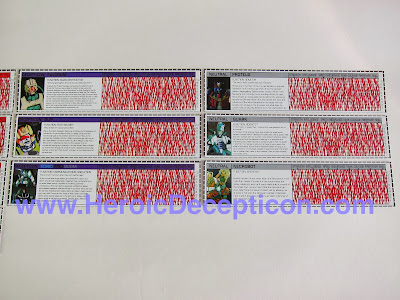 Hey look, its the Necrobot together with his appearance in the MTMTE comic! Sweet! 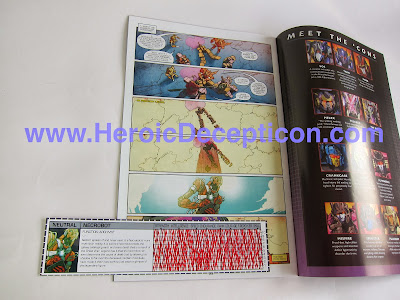 This is the TFTM set. Custom tech specs for Transformers: The Movie (1986) characters. It consist of 1 Autobots, 2 Junkions, 2 Lithonians, 4 Quintessons and Unicron! 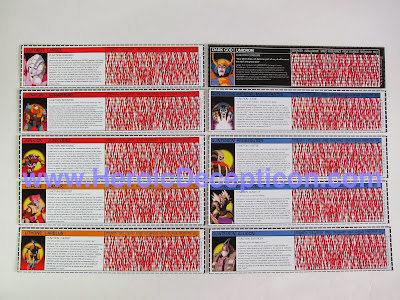 Here is another 'group shot' of the Tech Specs, this time with the red Tech Spec decoder. Yes, that's right, each blind packed set came with a Tech Spec Decoder. Seriously, the work and attention to detail that went into these are very impressive. 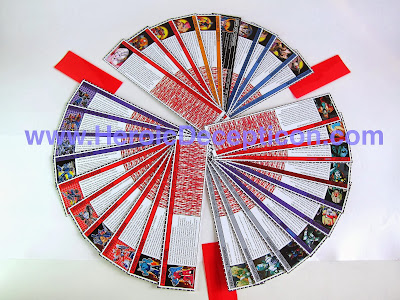 ***
Now, in a slant that is a little different, I try to pair up these custom Tech Specs with their toys... 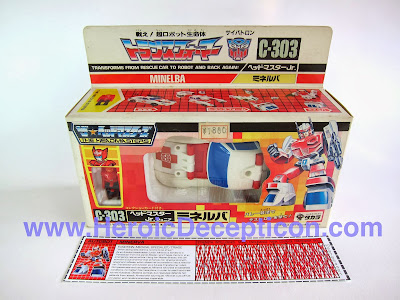 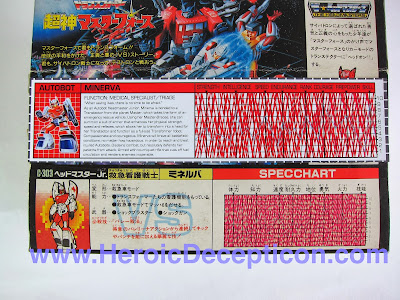 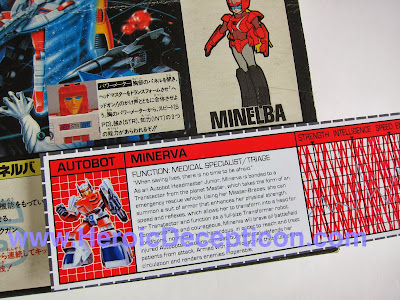 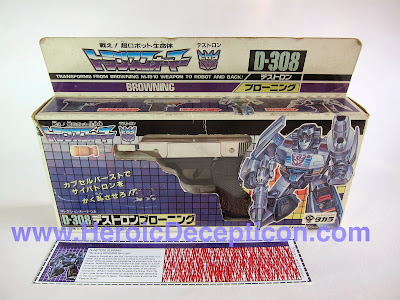 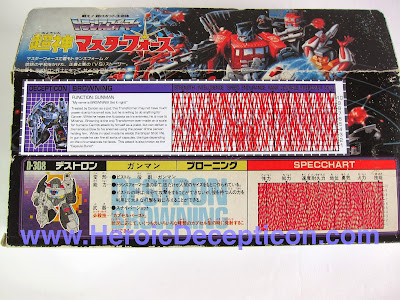 A comparison of the Japanese Tech Specs with Arkvander's custom Tech Specs. 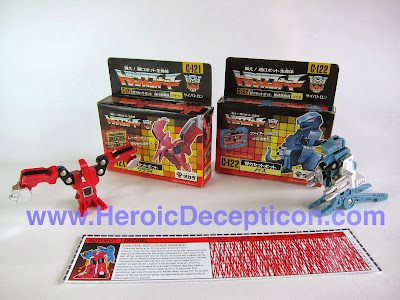 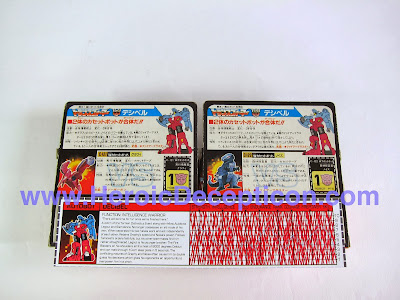 As can be seen, Decibel never had a Tech Spec. A reason could be because there simply isn't enough space on the box for a Tech Spec for their combined form. 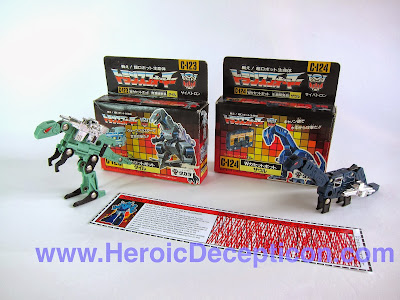 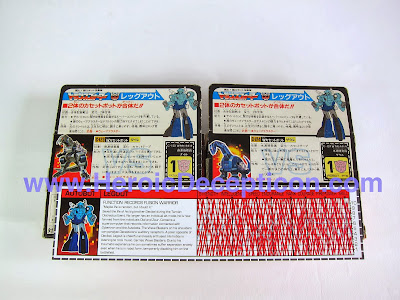 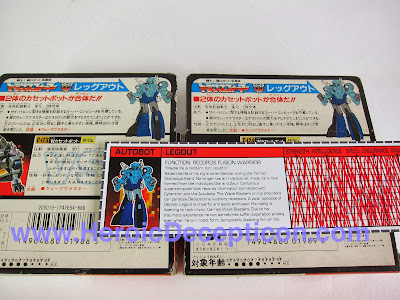 It is difficult to express what wonderful works these Tech Specs are. As can be seen lots of effort has gone into them - from deciding on appropriate characters, to researching the right bio, to charting the spec graph itself. It must have taken Arkvander many hours to put these together.

Having the honour to hold these in my hands, the results speak for themselves - a one of a kind enhancement to existing G1 figures and an extension to the joy and sophistication of MTMTE. At some point, I would like to talk one by one about each of these Tech Specs, because long as this post it, I did not manage to get into the details of each Tech Spec and to properly do it the justice it so richly deserves.

In closing, I would like to thank my buddy Arkvander for these. They are very special, especially when matched with their respective G1 pieces.

They are very much appreciated and I am very happy.