Giddy up! It's Hasbro versus Takara in Optimus Prime / Convoy trailer Race Day!

Trailer Race Day happened on or around 4 September 2014. I took the photos on 4 Sep 2014, but it is only now that I am documenting it and writing it down. 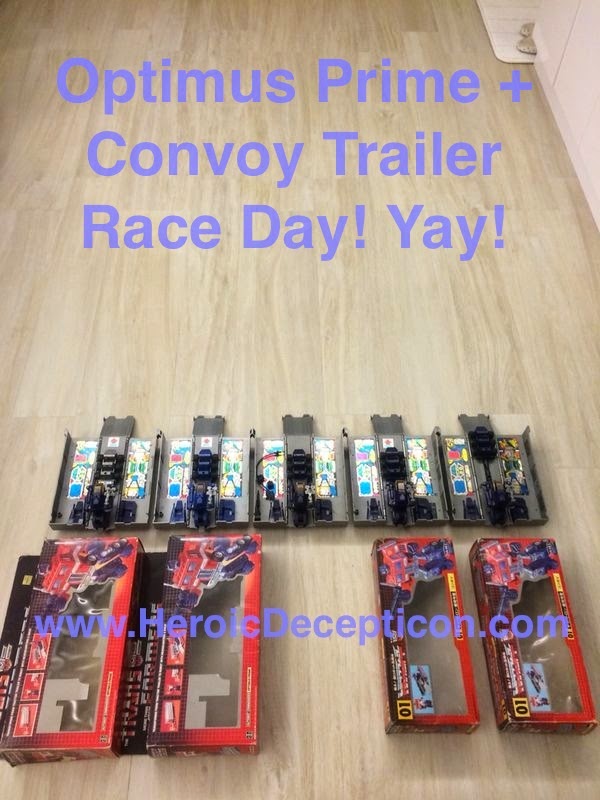 I was at home alone that night because E was working late, after having picked up a variant of 01-Convoy from a HK collector. I suddenly realised that I had a lot of Primes on hand... and I asked myself: 'I wonder which variant of Prime has the most powerful trailer'.

And then I thought further, 'Just how powerful is the fabled VSX-style 'super' launcher. Is it really that super?'.

I grinned and resolved within myself: 'I have the Primes, I have the time - let's have me a Trailer Race Day!!!'.
So first, here is a look at all the MIB Primes / Convoys that I have. I will go into which is which later. 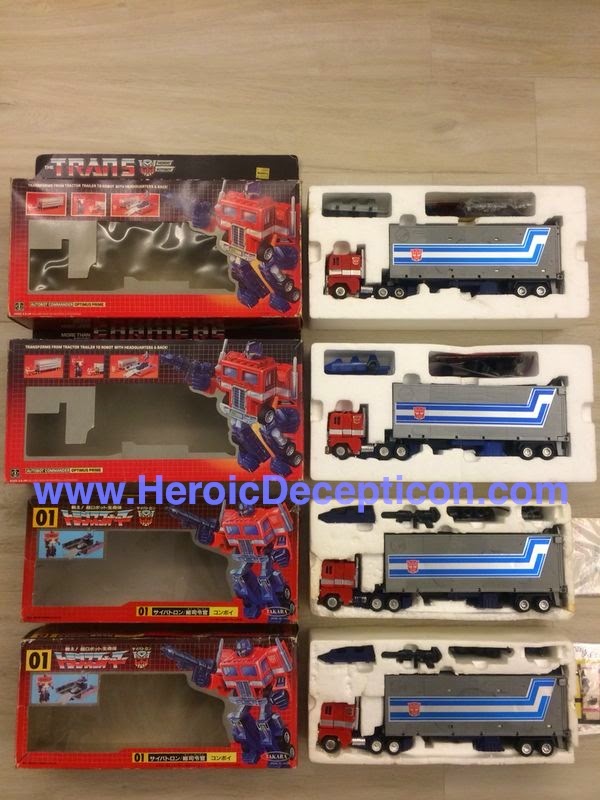 Here they are all lined up for the race. Note that each Prime / Convoy will be using the Roller that came with it. So, left to right: 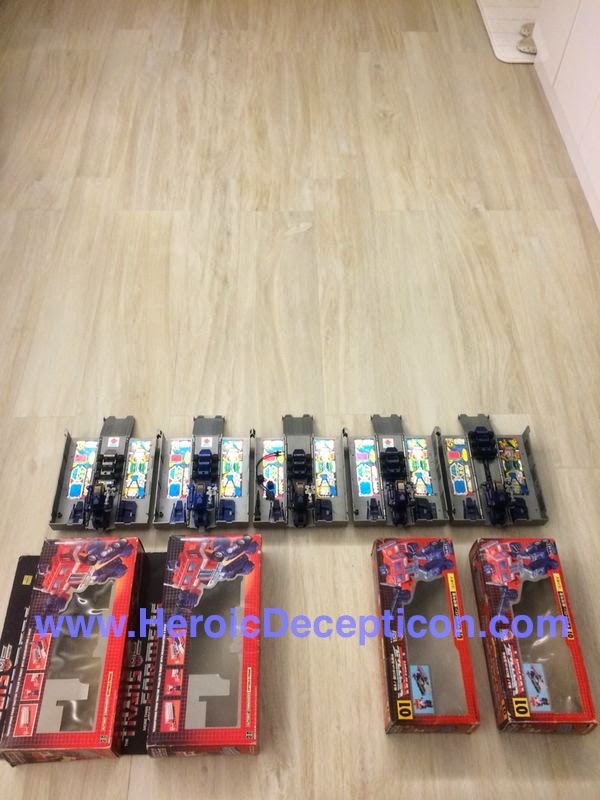 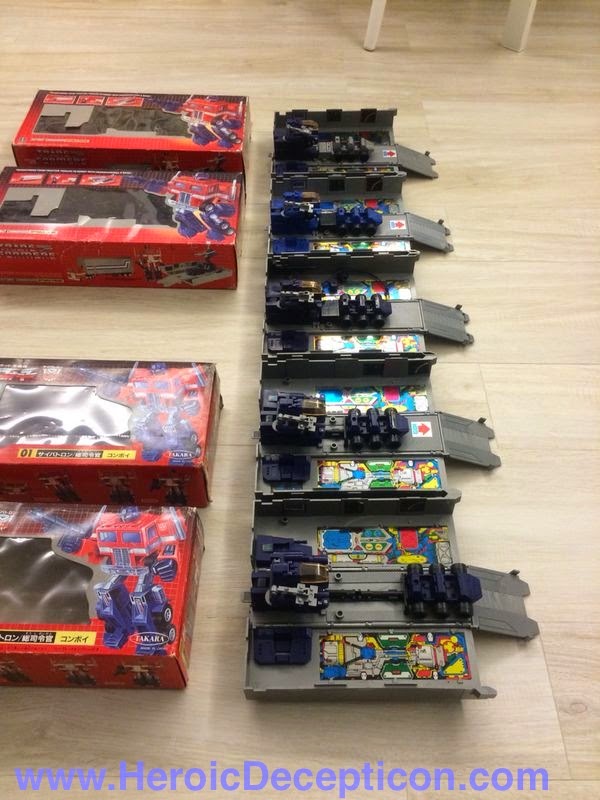 I discovered that #3 would not launch no matter how I tried - the launching mechanism is not working! But we can extrapolate that the Roller distance would be roughly similar to #1 and #2's distance. 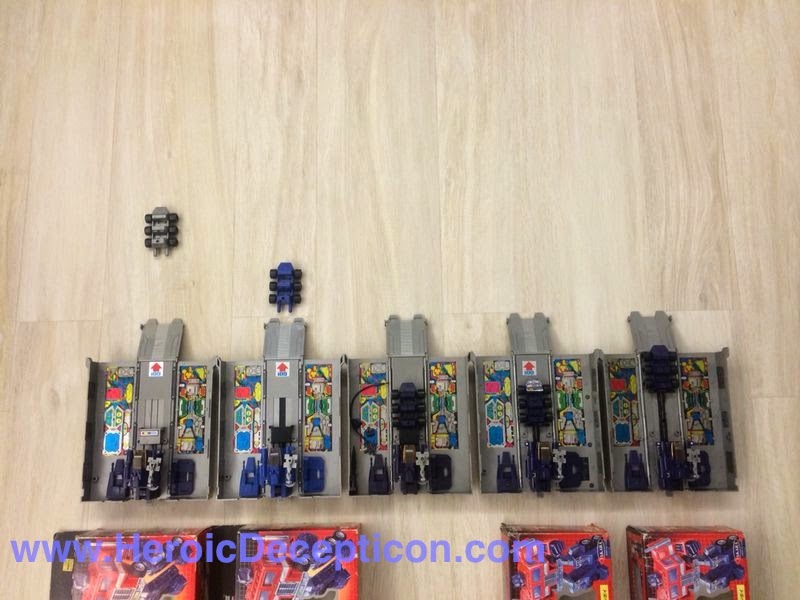 Next, I launched #4, which if you recall from above, has a VSX-style 'super' launcher....

Here is the result!!! 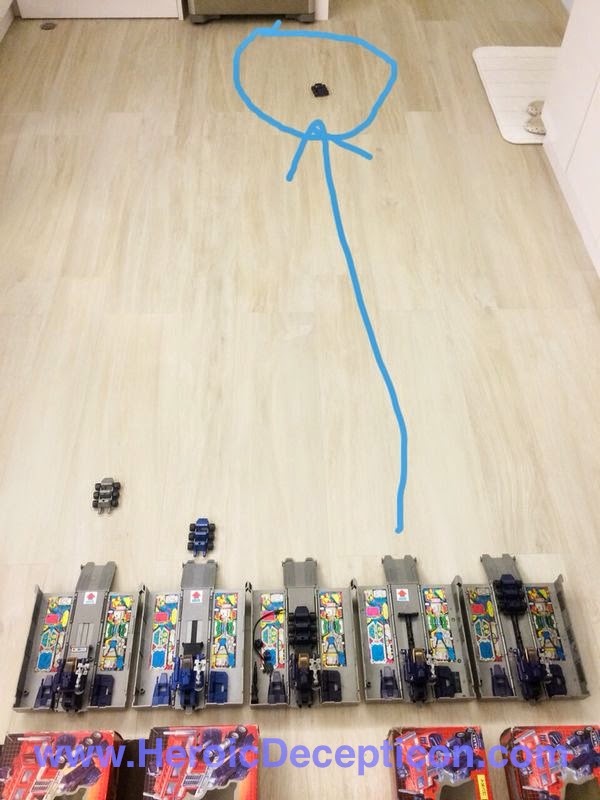 I stood there stunned.

Wow. So that is the power of a VSX-style super launcher. It is super indeed.

To be fair, I did not stop at one round and below I show the results of 3 separate rounds - I reset each Roller at the end of each round and launched them again. 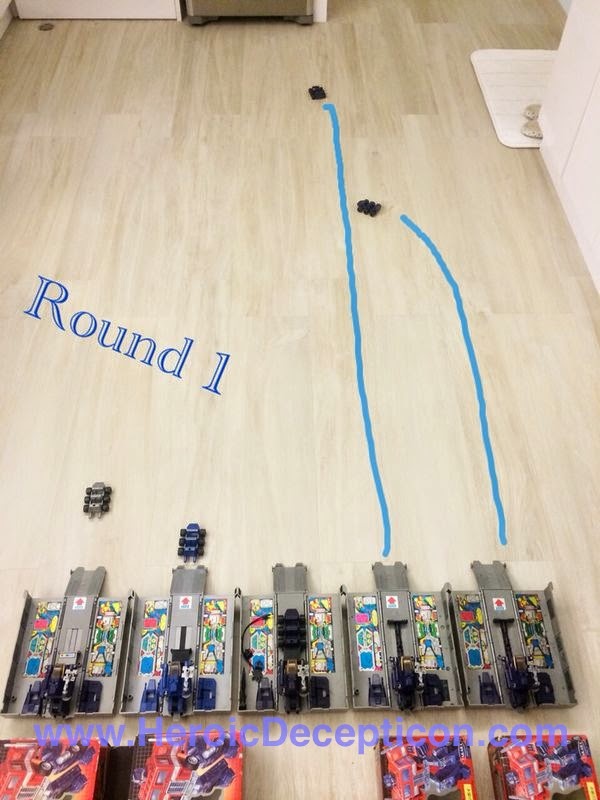 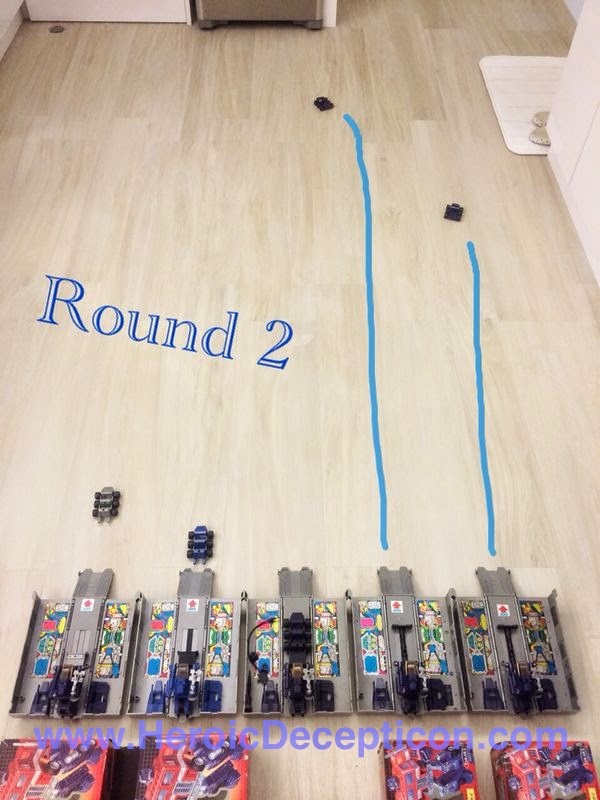 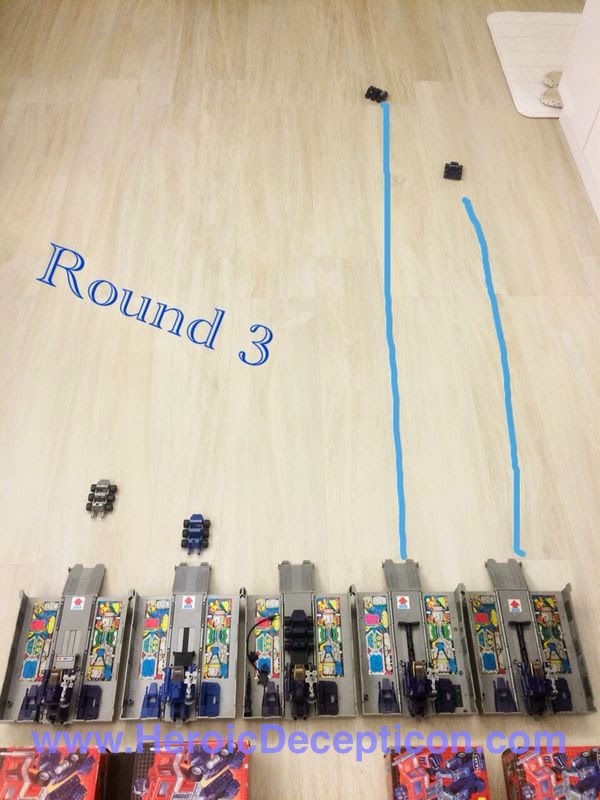 I think the results speak for themselves. Clearly the VSX-style super launcher is superior to any of the US released Primes (was there ever a doubt?). What's also evident is that the sticker version trailer of Convoy (ie: #4) seems to be more powerful than the metal plates version of the 01-Convoy variant.

I even measured the distance. #4 launched to a distance of 1.90 metres or slightly more than 6 feet! 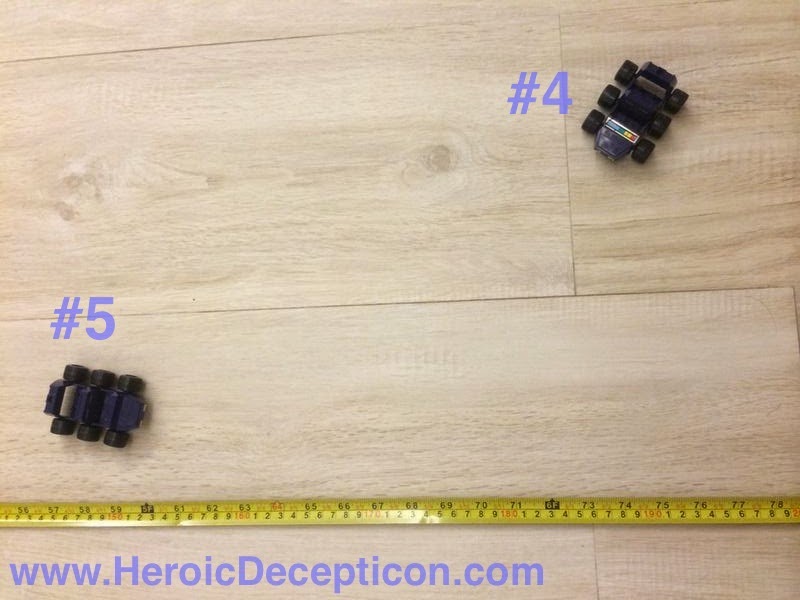 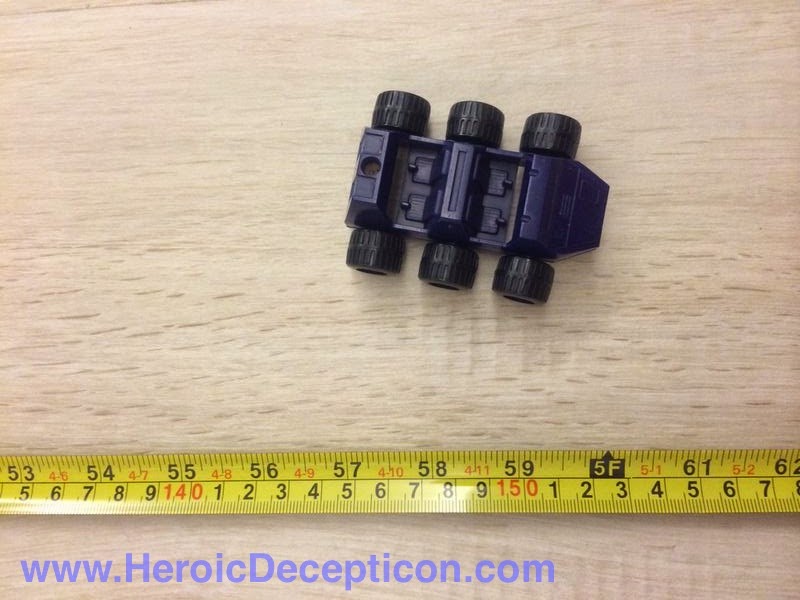 Well, this is it. Prove that the VSX-style launcher of the 01-Convoy toy is indeed 'super'! 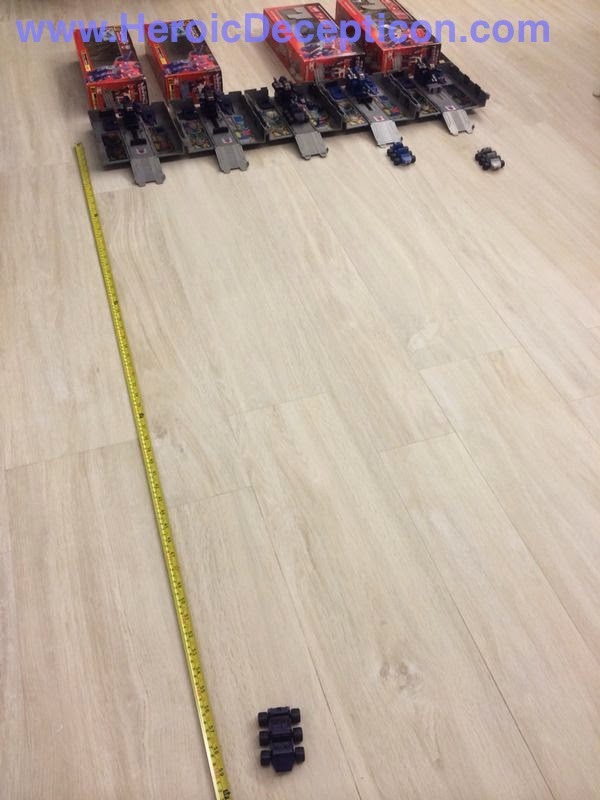 Posted by Heroic Decepticon at 21:39