Over the weekend, I've had to stay at home (many would know why). So I did a little light shelf re-arrangement and also took the opportunity to photograph some Transformers.

This series focuses on the Destrons (or Decepticons) that are within the numbering of '01 to 49' - remember my mission, here? 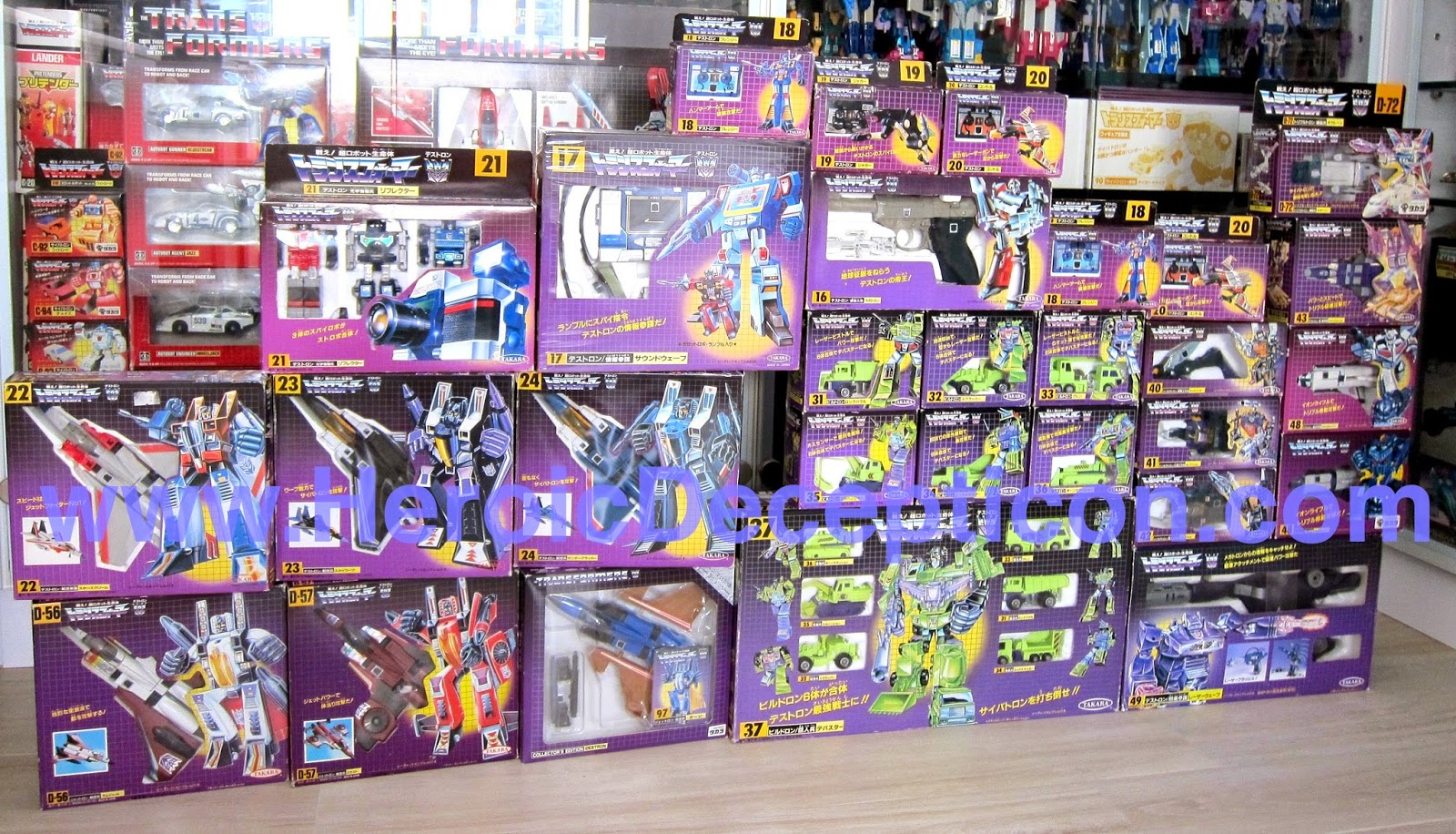 There were just too many boxes and I could not fit all of them onto my (tiny) table. So I took shots of the '1984' Destrons first (in truth, back in Japan all of '01 to 49' were released in 1985 as part of the Fight! Super Robot Lifeform series). 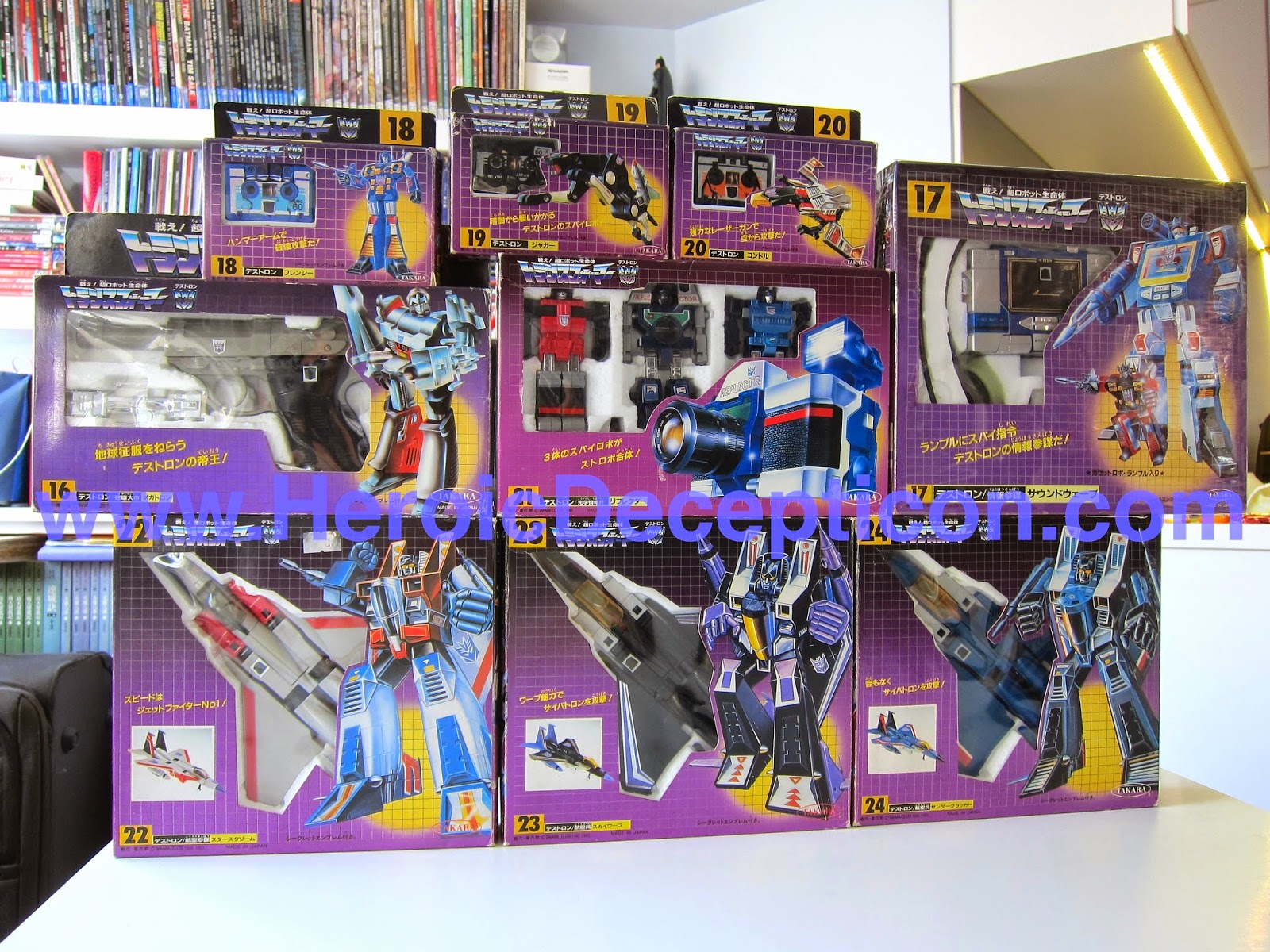 For completeness, I also snapped pics of the  jets that were released in the following year (except Dirge) with this group.
Very bottom row: D-56: Ramjet; D-57: Thrust; 97-Dirge (20th Century Toy Museum exclusive, released in July 2001; for the full story on why I included this version of Dirge, see here) 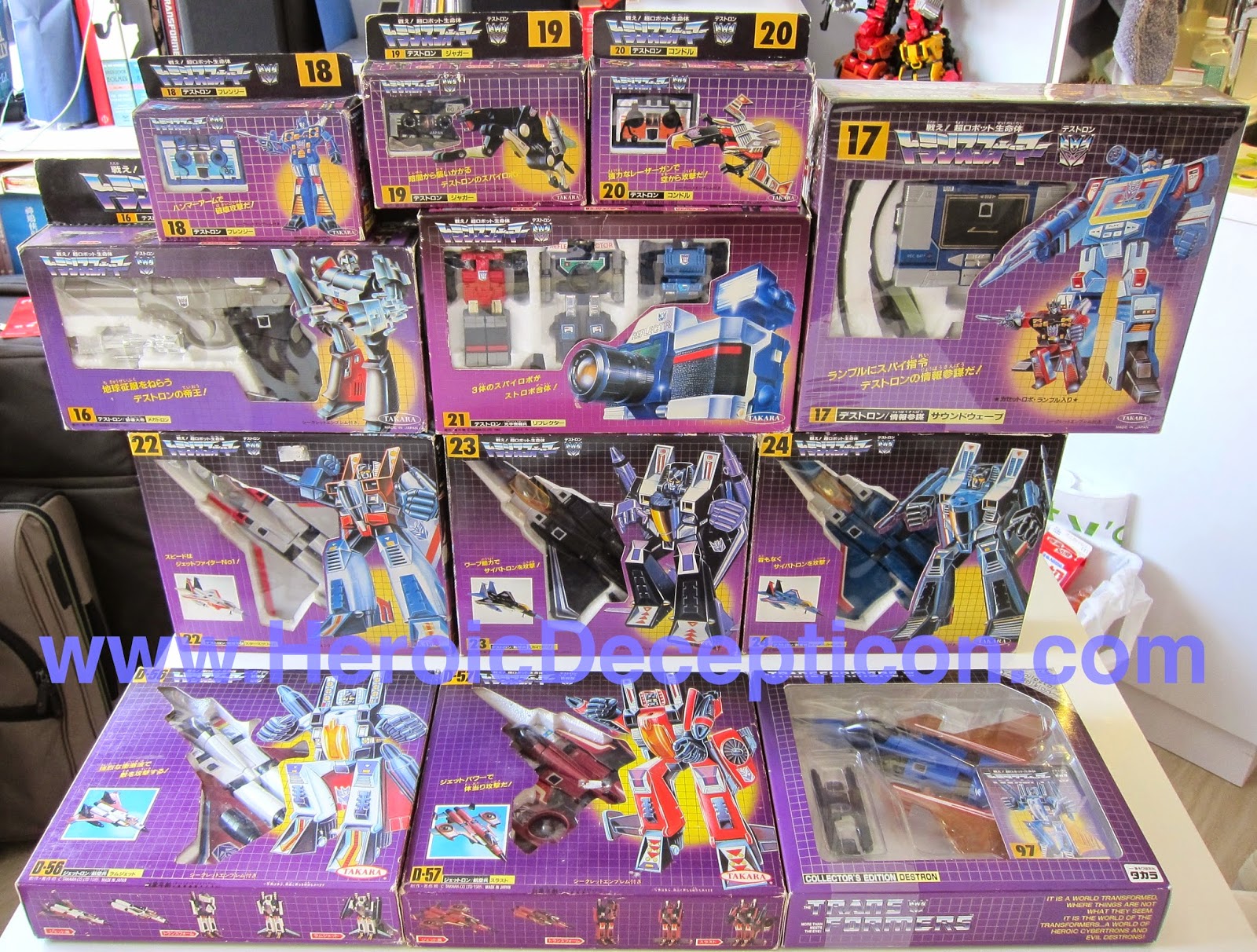 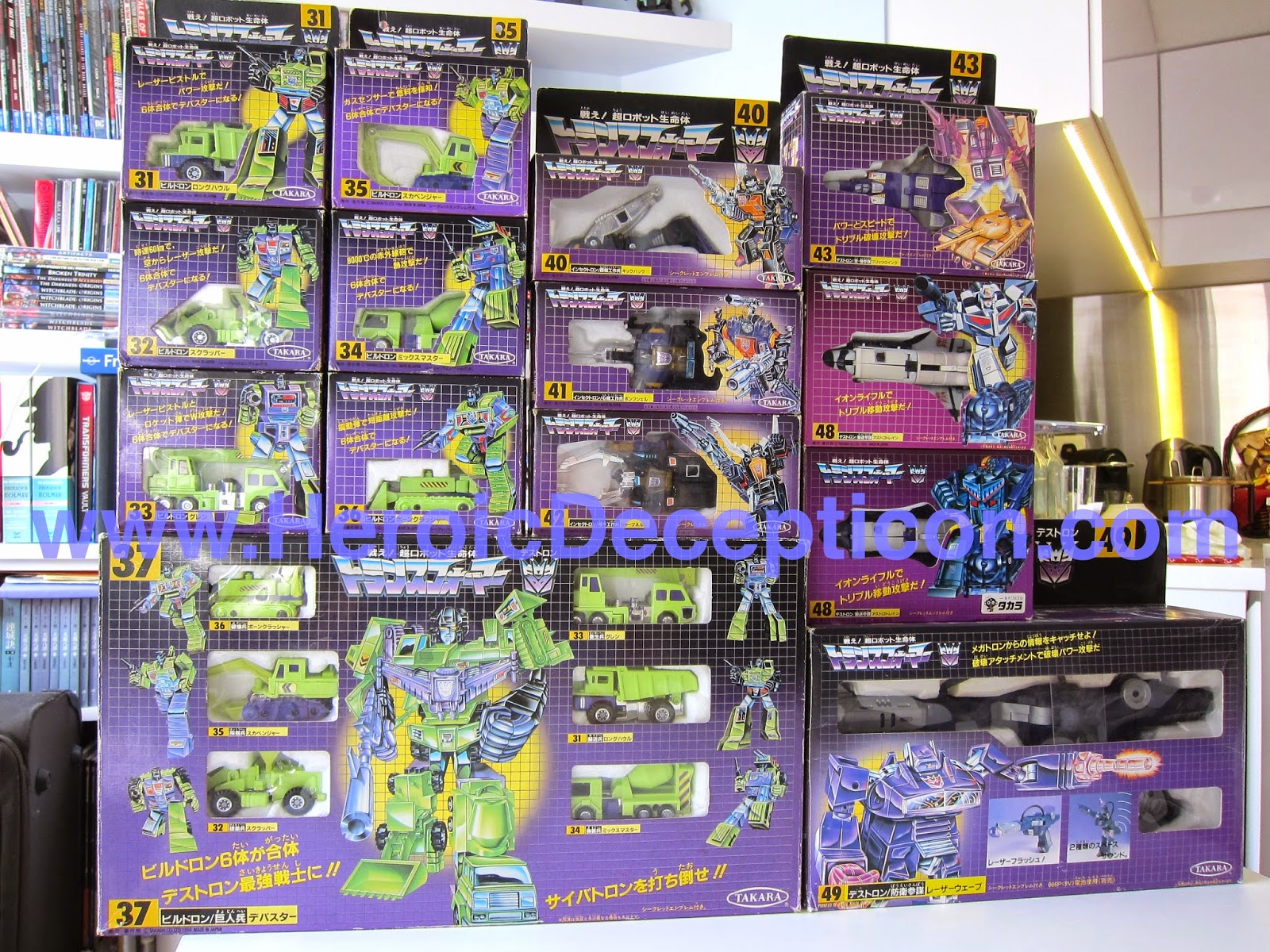 Another shot of the Constructicons and their giftset. 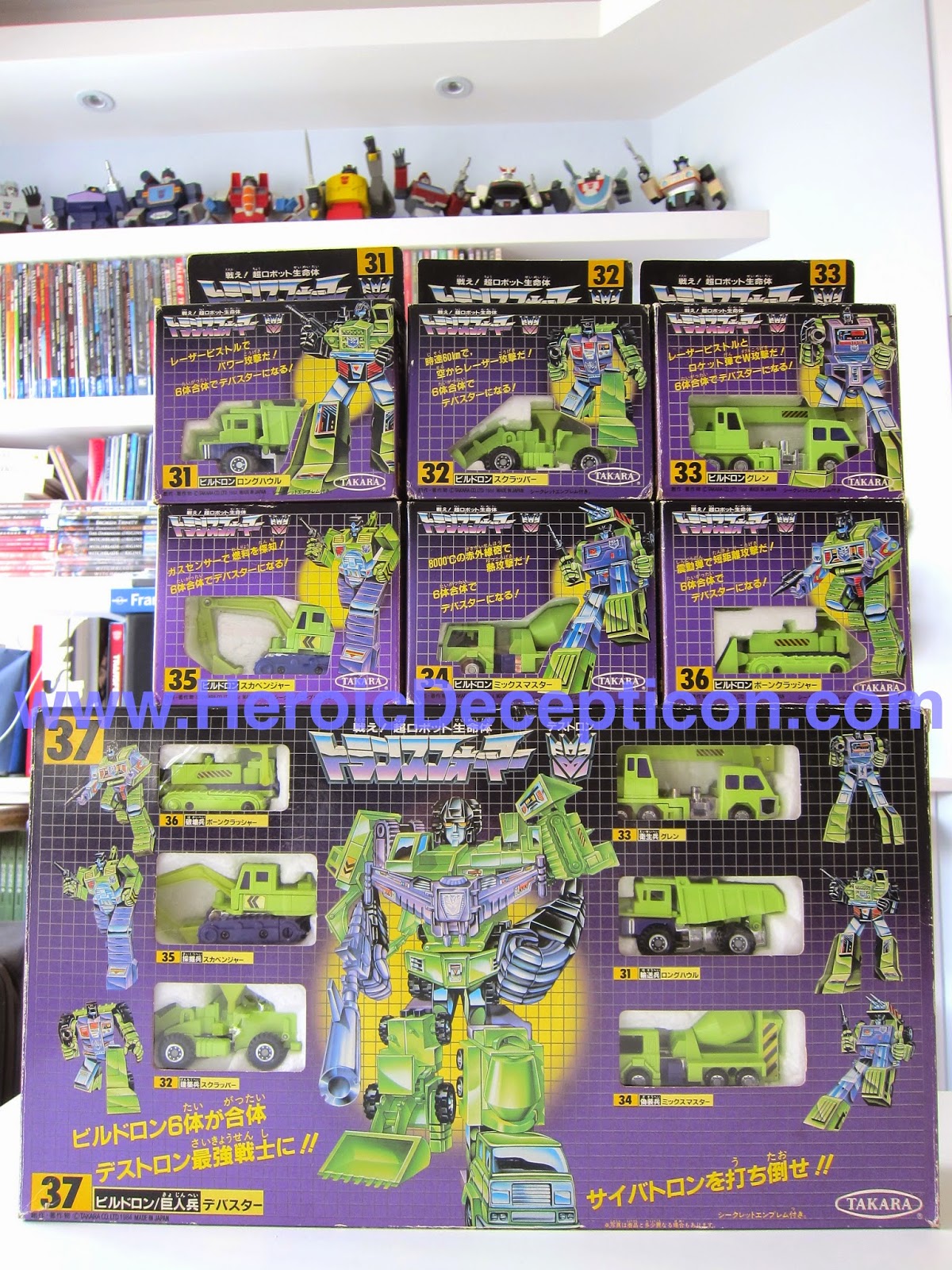 A group shot of all the Destrons in the '01 to 49' numbering. This is all of them, but I've put in some extras because catroon-wise, it made sense to also put them in this group. I will talk about them below. 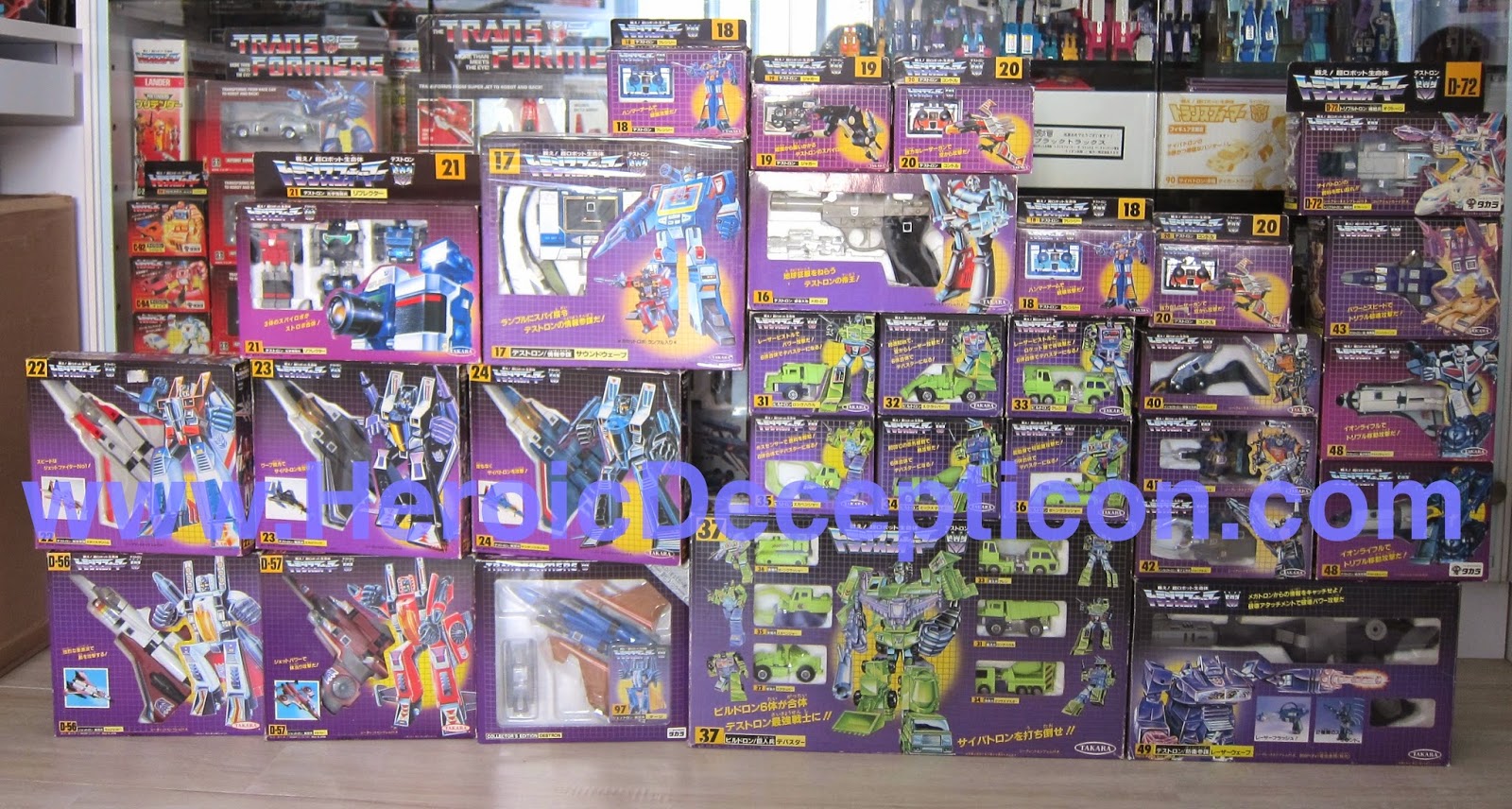 The Decepticon seeker jets. The three on the bottom row are not part of the '01 to 49' numbering. I have included them so that there is a complete compliment of seekers in the shot.
Middle row: 22-Starscream MIB; 23-Skywarp MIB; 24-Thundercracker MIB
Bottom row: D-56: Ramjet; D-57: Thrust; 97-Dirge (20th Century Toy Museum exclusive, released in July 2001; for the full story on why I included this version of Dirge, see here).
(All the jets except for Dirge are from Devstar37). 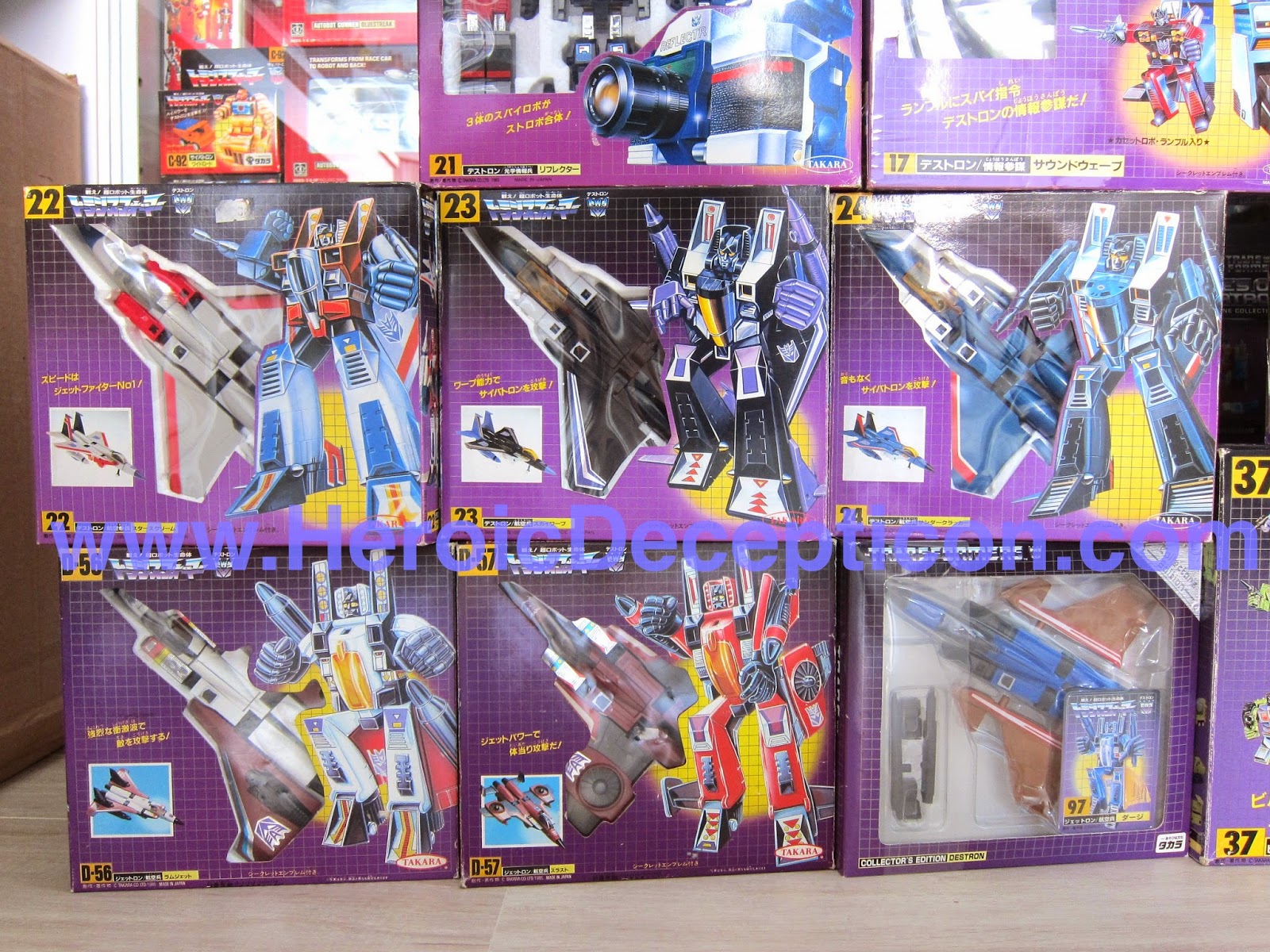 21-Reflector MIB. Arguably one of the rarest pieces in this lot. Extremely difficult to find in good condition and even more expensive and rare if unused. I bought this from a Malaysian seller on eBay. 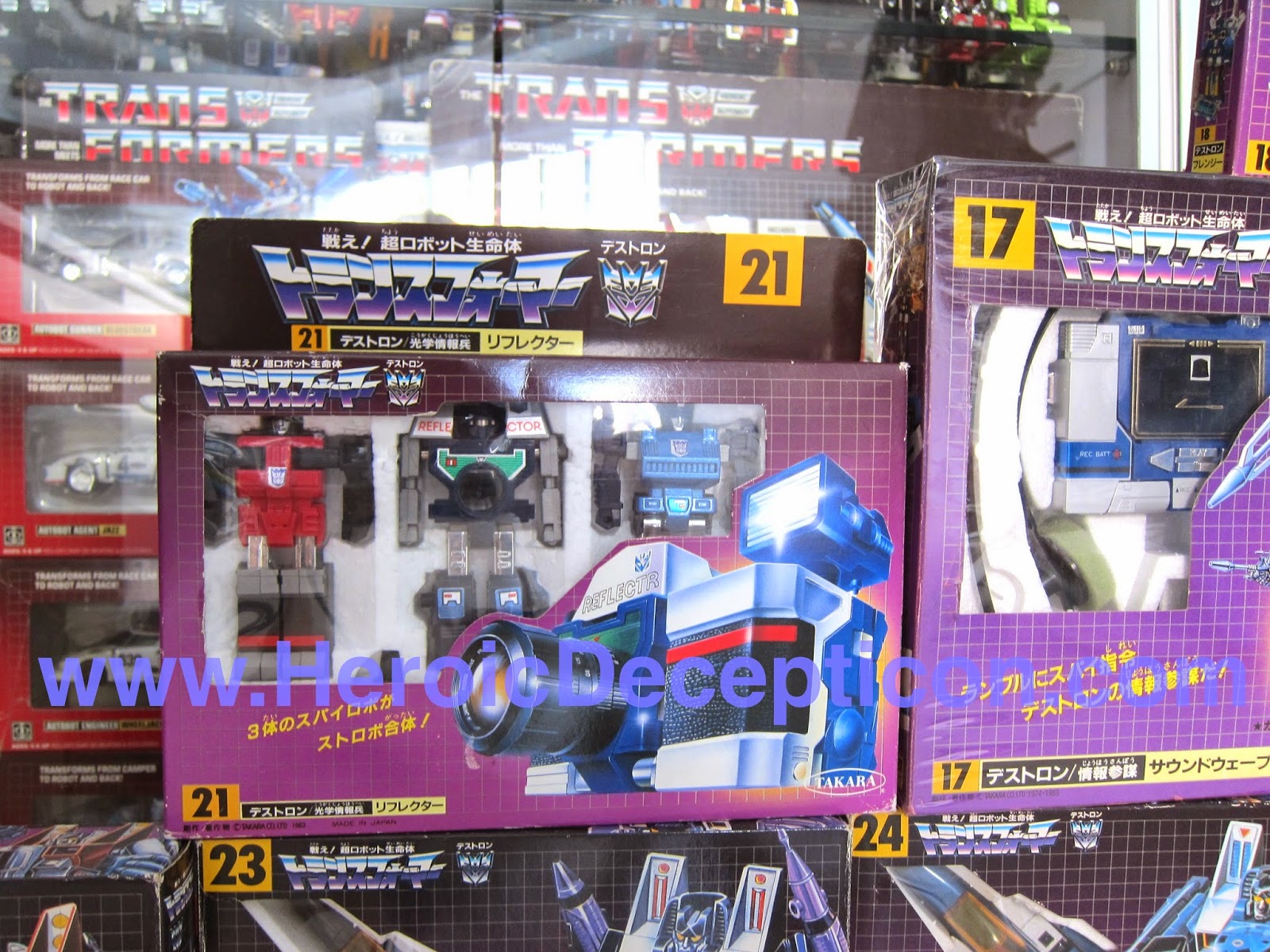 17-Soundwave MIB. This piece belongs to E. I bought it from my usual shop here in Hong Kong. 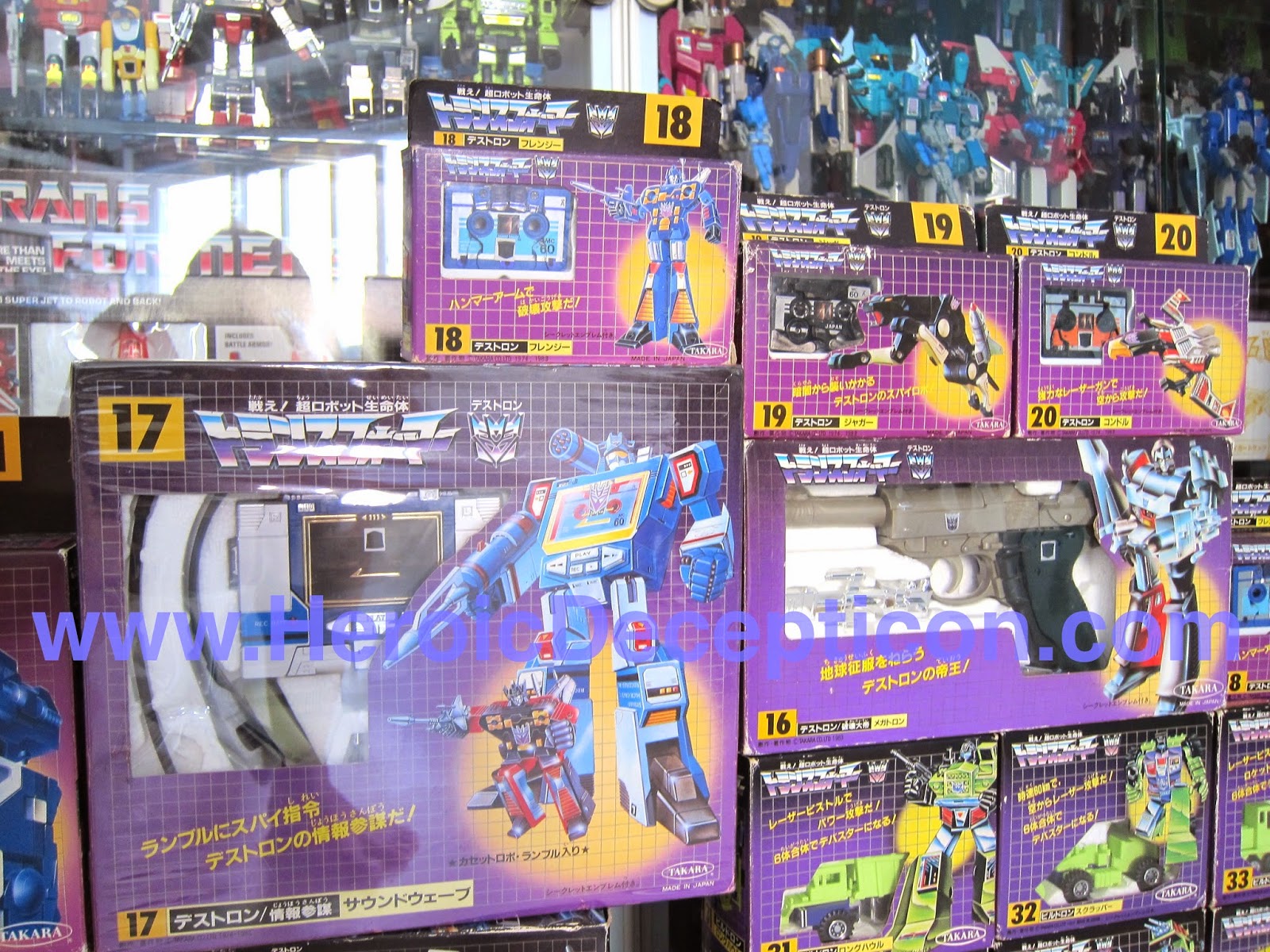 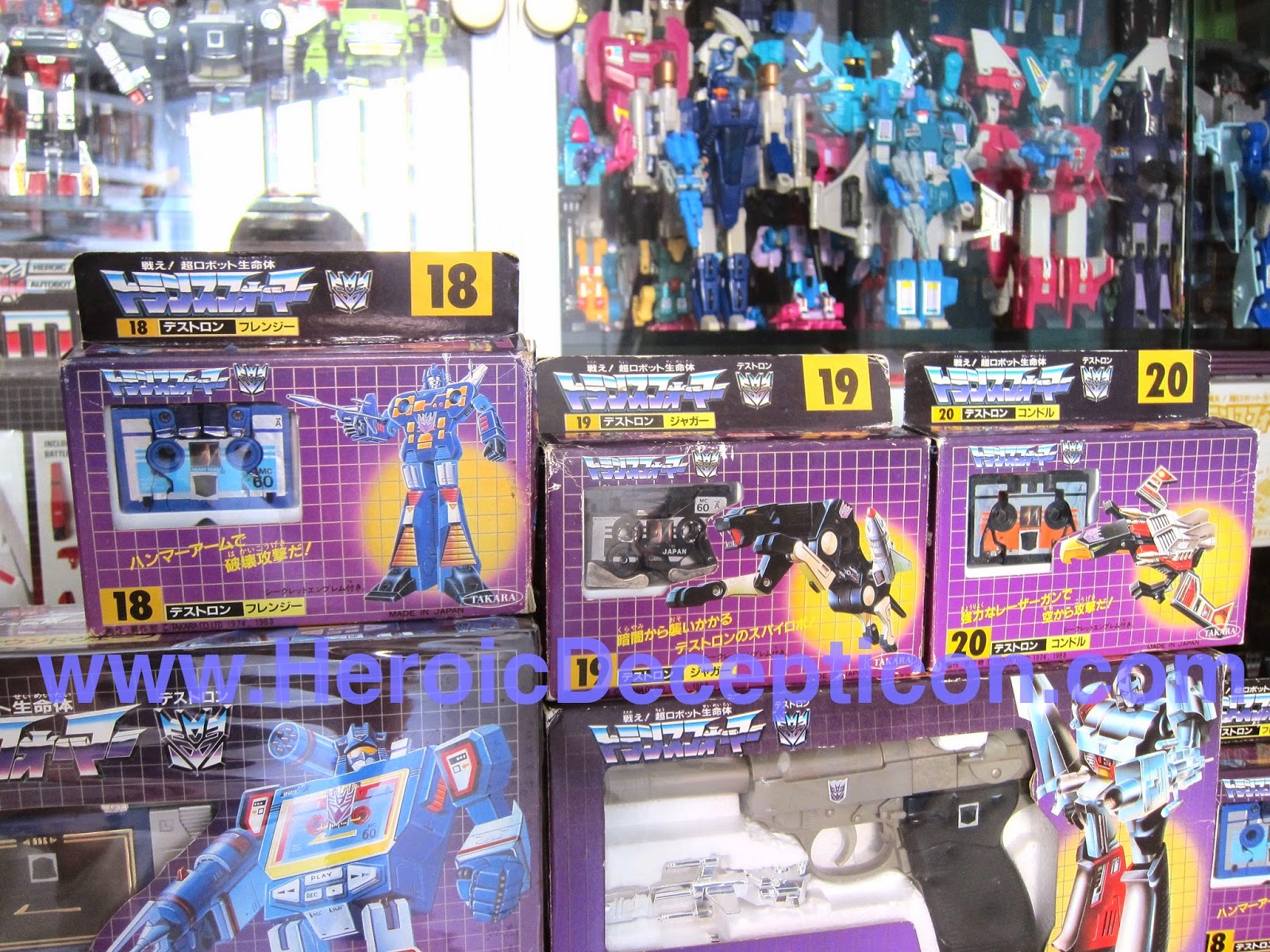 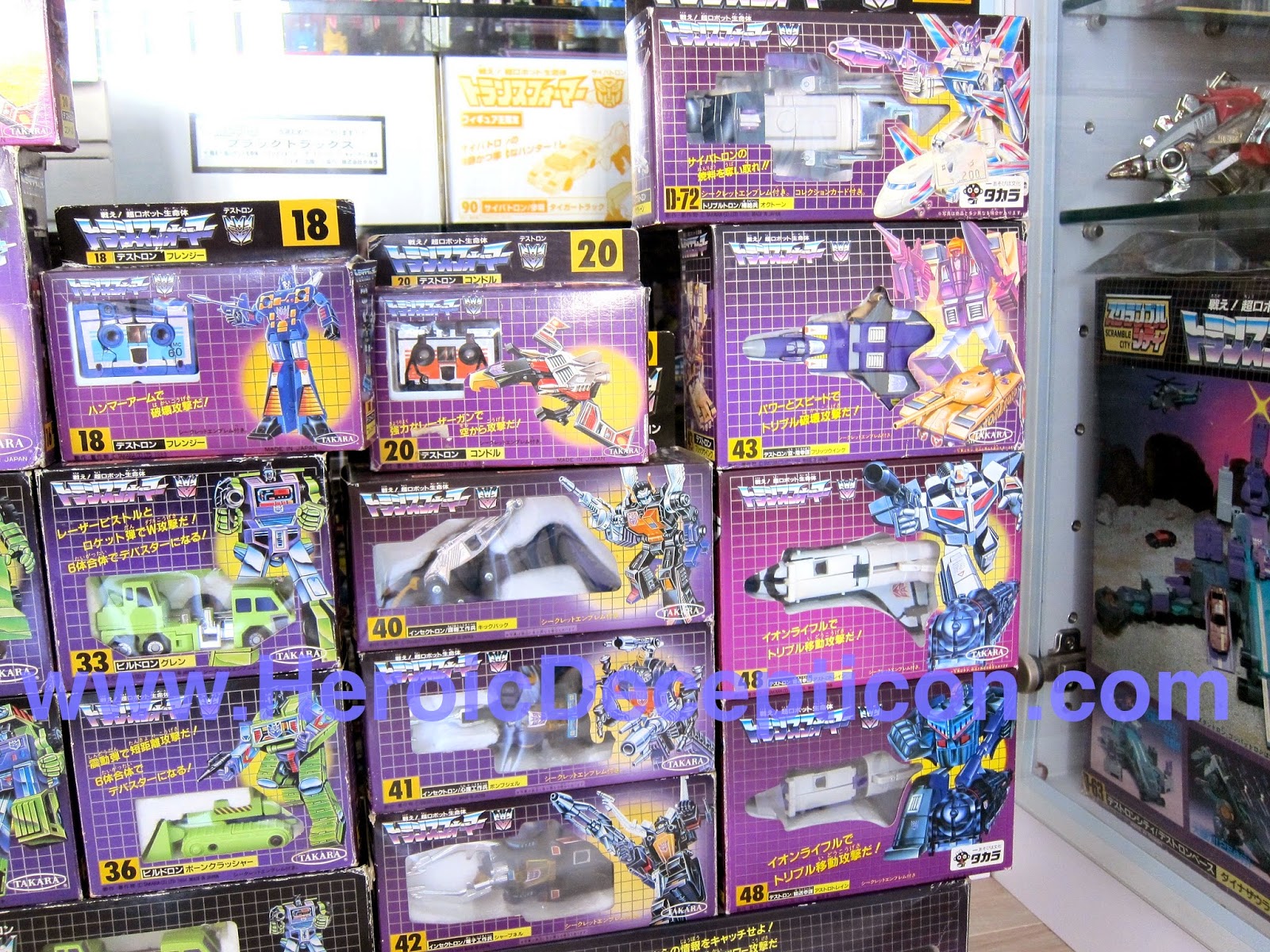 Posted by Heroic Decepticon at 14:48