About a year ago, I conceived of a "mission" in my mind - I wanted to acquire 'proper' versions of the TFs that mattered to me. 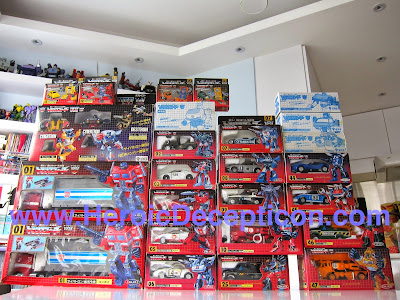 Over the years, I have gone and acquired a lot of TFs from 1984 to 1992, all in the name of completion. Also 99% of them came in USA boxes or packaging, but many were without the ever elusive 'bubble insert' that tends to go missing (or even when present, is quite pointless). For the Japanese section of TFs, my collecting aim up till that point last year was that if there is an equivalent USA release, I would get the USA boxed version and not the Japanese boxed version. This means that I would not have gotten a 01 - Convoy MIB because I would have gotten a USA Optimus Prime MIB; however, I would get Japanese pieces that had no USA equivalent release, for example Artfire.

The 'mission' then, was to also acquire all the early Japanese TFs. In particular, I wanted my focus to be on numbers 01 to 49, which were the earliest Cybertrons and Destrons in the Japanese line (ie; both Autobots and Decepticons were mixed into the 01 to 49 numbers).

After about a year and two months, these are the Cybertrons (Autobots)... 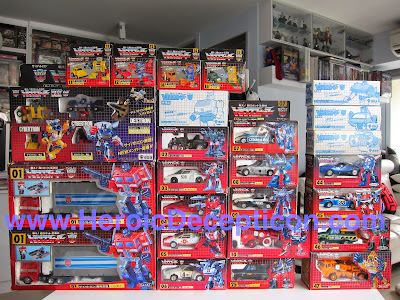 Others came from various sources and some were more difficult to find than others. 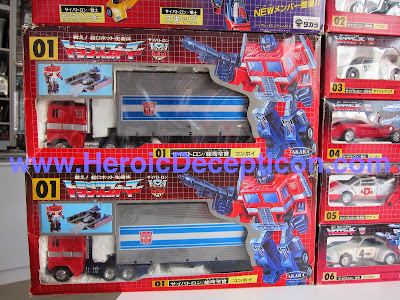 11-Bumble was one of the last pieces I got for this lot and was very difficult to locate (for me). It came from Himawari from Canada. Thanks buddy! 12-Charger was from Yahoo Japan. 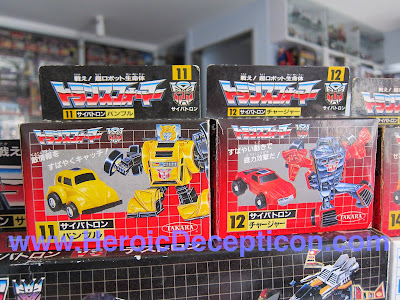 14-Drag (Huffer) and 15-Gong (Brawn) both came from Yahoo Japan. Thanks to Brr-icy for helping me look out. A fellow collector told me that 14-Drag (Huffer) was the most difficult mini-bot to obtain from this early batch of Japanese TFs. I guess for me, it's 13-Cliff since, that is the one piece that I am missing! 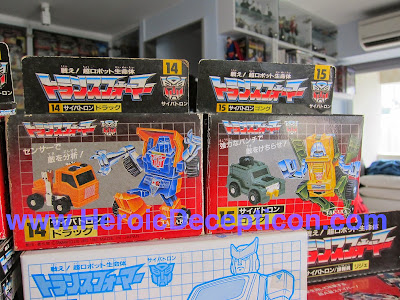 VSX giftset is from Devstar37. The reason I included this set in this line up is because Sunstreaker and Skids were never released individually boxed in Japan. Therefore, the only way to get these two characters in Japan was to actually buy the VSZ giftset (up to that point, before the release of D-101: Soundblaster, the VSZ giftset was also the only way a Japanese kid could get Buzzsaw). Therefore, in terms of Japanese packaging, the VSZ giftset is key to 'completing' the early early Japanese Autobot 'cars' (it is at once more special than VSX or VSY because toys from those giftsets were released individually). 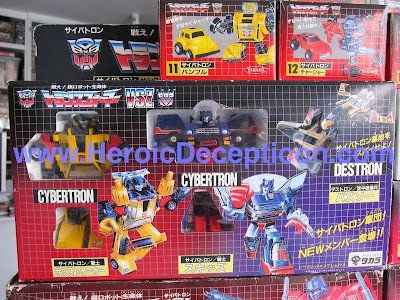 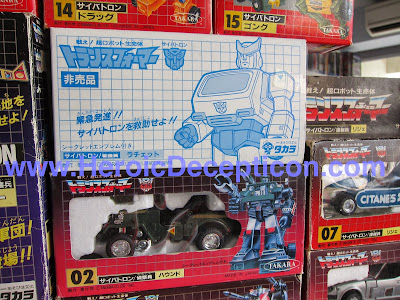 03-Wheeljack was challenging to get. I guess Wheeljack in any form or box is not the easiest Autobot to acquire. For this one, I had to buy it from a Japanese online store. It is one of the more expensive pieces that are in this lot of toys seen here.
04-Lambor is from Devstar37. 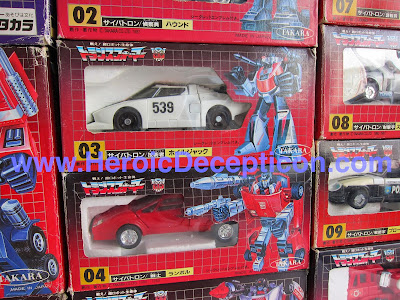 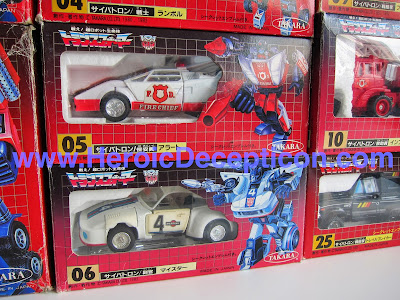 07-Ligier is another piece that is quite difficult to obtain. According to Maz, 07 and 25 are the two most difficult to obtain pieces among the 01 to 49 Autobot cars. On my trips to Japan, I did see 3-4 pieces of 07 on the shelves but somehow didn't pull the trigger and then had to resort to other means of getting it. It did take awhile, but I managed to find this piece from Yahoo Japan.
08-Streak is an extremely beautiful piece also from Devstar37. 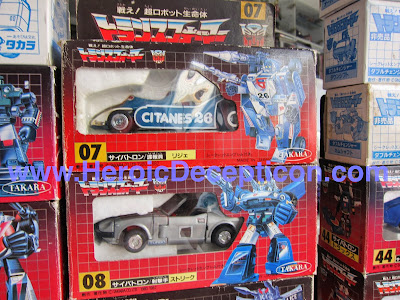 09-Prowl is from Devstar37.
10-Inferno I bought directly from Japan when I was there shopping for transformers. Amazingly, this turned out to be one of the cheapest pieces in this lot of toys, it was amazingly cheap for what it is. Perhaps the store had mis-priced it. 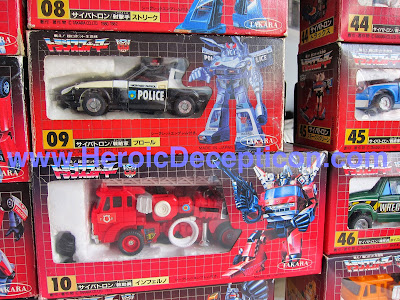 25-Trailbreaker was from Himawari from Canada. Maz was right, this was the most difficult piece for me to obtain. There were actually 3-4 auctions for nice 25-Trailbreakers on Yahoo Japan over the past few months, but they were all variously ruined by crazy bidders called "pwg***", "dai***" and "alo***", who bid astronomically high prices just to ruin the auctions. After a few relists, I think the sellers gave up and did not sell their pieces. Fortunately, Himawari has a piece and was willing to part with it. The piece you see here is very mint, very complete and very unused. However, this is also the highest priced piece among all that you see here - it is even more expensive than the VSZ giftset!!! 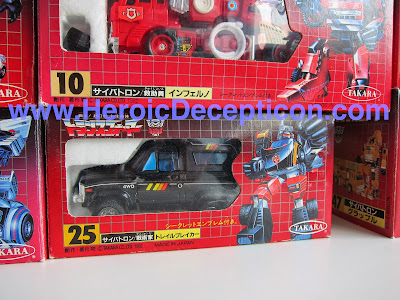 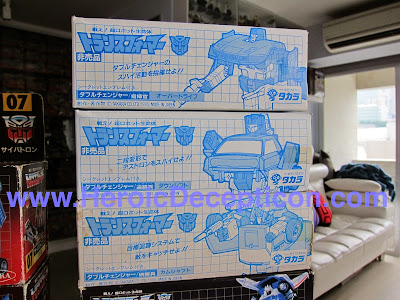 44-Tracks, I tracked down using eBay from a great seller that gave me a good deal. 45-Smokescreen was from the same seller from eBay. 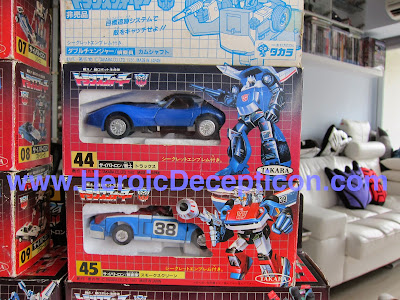 46-Hoist, Wrecker variant, is from my usual toy shop in Hong Kong. It is very mint, very unused and very nice. Again, one of the more expensive pieces in this lot.
47-Grapple, I got from Japan some years ago on a trip there. Like Inferno, this is very cheap for what it is. 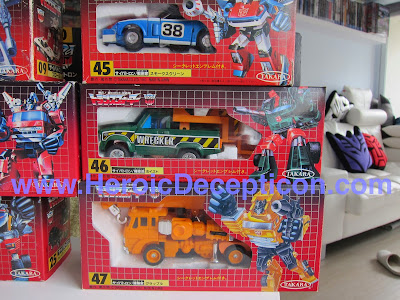 So there we have it, the status of the Autobots with the 01 to 49 numbers. Missing all but one piece - #13-Cliffjumper MIB. It is not a difficult piece to get and I see it from time to time, so I am not entirely worried about it.

So, a final tally of some statistics...

* my favourite piece in this lot? Definitely 08-Streak MIB! 03-Wheeljack and the VSZ also comes close.

* Cheapest / best deals pieces? 10 and 47 both cost less than US$80, so I consider these the best deals and cheapest among the lot.