A couple of days ago, I received a surprise package from a buddy collector friend. It was a good surprise for a weekend and I talked about the contents of the package in my post here. 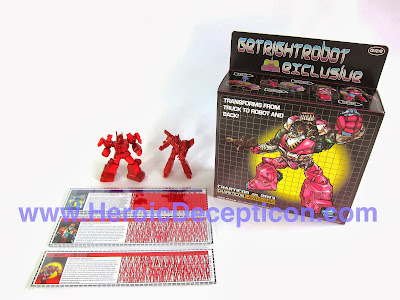 For this post, I want to focus on a particular item in the package - the Get Right Robot Charticon exclusive Landshark.

What is Charticon you might ask? It is an unofficial Transformers themed convention organised by fans, for fans. It took place in Charlotte, NC, USA from 9 to 11 August 2013. The next Charticon, as I understand it, will take place sometime in 2015. I am looking forward to it! 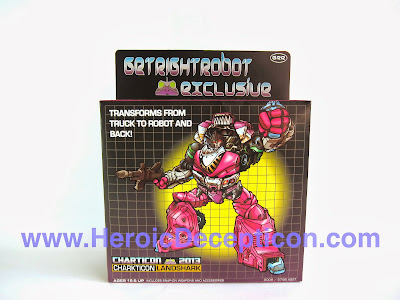 So now, on to Landshark. This is the description and intent behind this figure from the Charticon site "Our friends over at Get Right Robot have let us know they will be offering an exclusive figure of their own at Charticon: LANDSHARK! Landshark will come with a brand new head and new custom weapons not to mention an awesome paint job! These awesome Gnaw homages will only be available in very limited quantities at the show and will not be sold online. "

The moment I saw promotional shots of this guy, I knew rightaway that I had to get it, somehow. 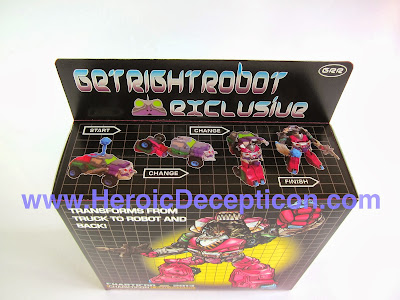 Vintage style transformation graphics on the top of box


Among the many reasons behind the push to get this figure are these: (1) it is an updated version of Gnaw, the G1 Sharkticon, better, more fearsome and menacing; (2) it is done by Get Right Robot, (in my mind) one of the up and coming customizing specialists; and (3) it is so representative of the convention, which has a Sharkticon theme (Charticon anyone?) and Landshark is meant to be a Sharkticon.

Landshark could and should be the Charticon mascot for this year? 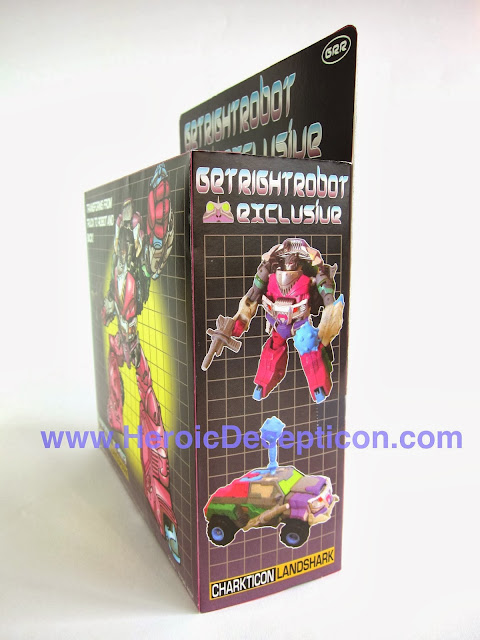 The side of box - again, very reminiscent of G1 box designs with a background grid pattern and the robot and vehicle mode showing.

The below photo shows a function bar. Function = Charkticon (An alliteration of the convention name 'Charticon', nice!). Name = Landshark. 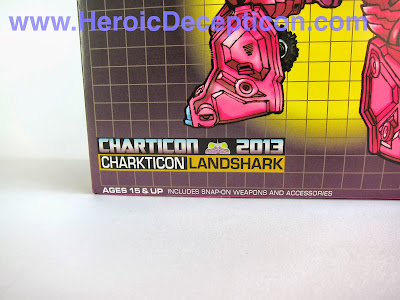 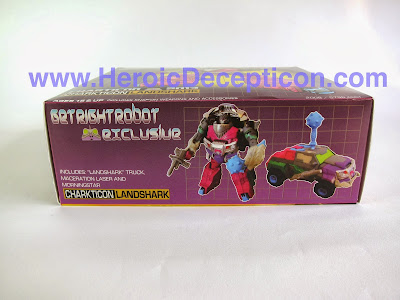 A shot of the bottom of the box. Again, a lot of effort was spent to evoke G1 like design styles and themes, and very successfully, I might add.

This is the back of the box. As can be seen, it has all the essentials of a G1 style box. The poster background, some words describing the Transformers' war, robot points and tech specs! 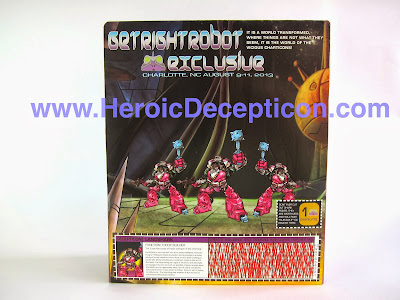 Now, lets see what the words say. It is pretty close to what G1 boxes say at the back, with the exception of the last line "... it is the world of the vicious Charticons!".

Now, I wonder whether this is in fact what its meant to say, or was it meant to say "Charkticons", as is consistent with Landshark's function. Or perhaps this was meant to read exactly as seen, "Charticons", as a tip of the hat to the name of the convention. See, I did say that Landshark should be the mascot! 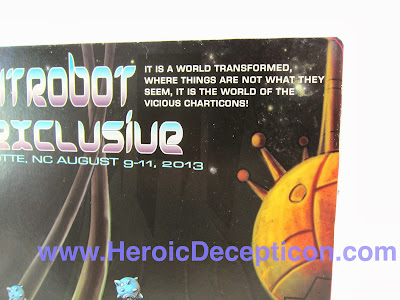 So, instead of Robot Points, we have here, 'Shark Points'. Reading more, I can see that the customisers were having lots of fun... here is what it says "Don't ever cut out Shark Points. They are worthless and will ruin your box if you remove them".

Words of wisdom if there are any. I could say that same of Robot Points - they are worthless where I come from because living outside the US and in Asia during the 80s, I could not mail in Robot Points for Transformers. 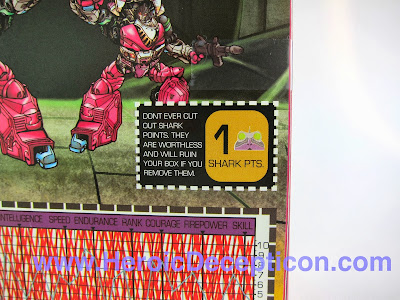 This here is the tech specs. Lots of good stuff and good writing, but I don't want to go too much into that. Have a look yourself! 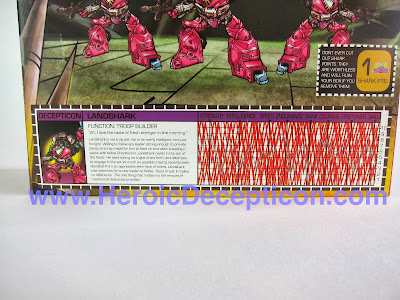 I have removed Landshark from his package, but I have not removed him from his insert yet. So the below photos will have to do for now, until I can lay my grubby paws onto him to play and transform him! 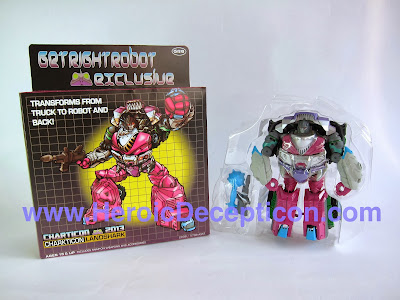 This is a close up of the insert. The painting is sublimely done. Very beautifully painted and finished. There are even various differing textures - the grey of the arms are of a different texture from the more shiny and smooth finishes of the legs. 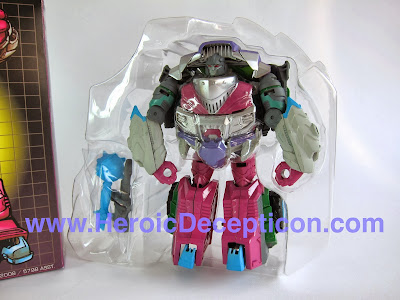 Look at that head-sculpt! If that is not a Sharkticon, I don't know what is. 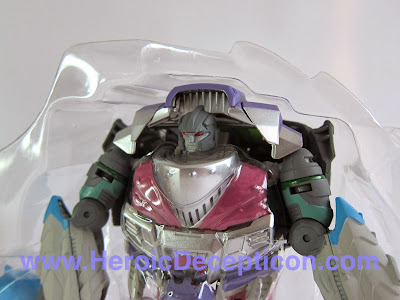 This is such a wonderfully customised piece. The selection of the base mold, the toy and every paint app is just extremely suited to fully showcase this classic character. Even the slightly bulky (pun) upper body is reminiscent of the pudgy and obese looking G1 Sharkticons. 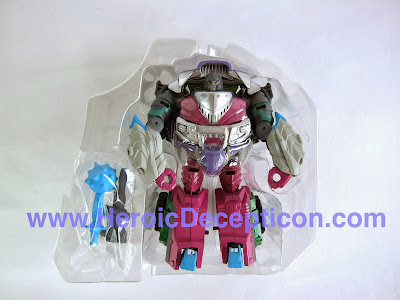 Get Right Robot and the Charticon team have really nailed it with this piece. It is at once a dead ringer for G1 Gnaw and also a stand out piece that is representative of the convention theme itself. Every tiny detail from the toy, the box design, the Shark Points and more, just shows how much effort has went into the conceptualisation, production and release of this wonderful piece.

Like I told myself, since I don't want to trouble friends (or attendees), if there is only 1 piece I can have from Charticon, it is and will be Landshark. And it is indeed the piece I got. Thanks to Arkvander (and to Get Right Robot) for making it happen!