From a flyer we obtained from Nakano yesterday, we discovered that there is a Mandarake at Ikekuburo! Never been there before. Plus one of E's friends recommended a very good place that serves eel in that area. Well, it's time to check this place out!

We found the Mandarake without much difficulty. I walked in. E quickly remarked, "Why are there only girls in here. Strange looking girls as well."

We went to this ramen place called 無敵家. It was very, very good. E now rates this place as her no.1 in Japan. 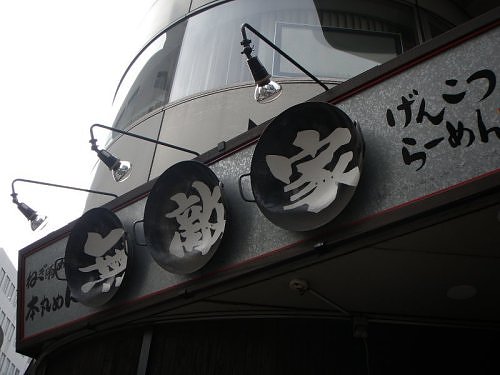 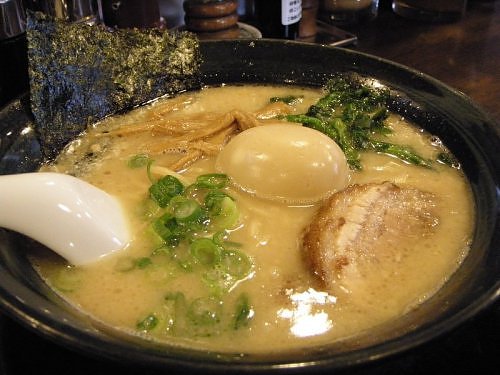 After lunch, we headed to Mandarake in Akihabara, definitely one of the much go toy places in Tokyo.

Here, I managed to snap some shots of the interior. I gotta say that its a lot less spectacular than a year ago and did-not-have-anything I was interested in. 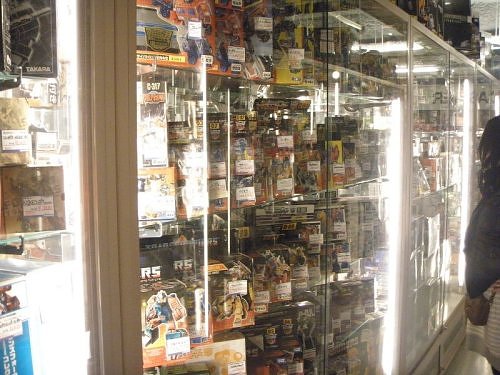 The top of the cabinets where they usually display the giftsets and expensive stuff. Nothing terribly impressive really - very tattered Defensor, Bruticus and King Poseidon giftsets and a Overlord that is way overpriced. 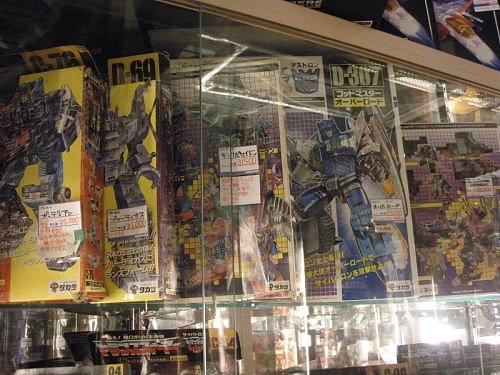 Some series 1 to series 3 stuff. There seems to be Kups, Jazzes and Prowls in abundance over there. 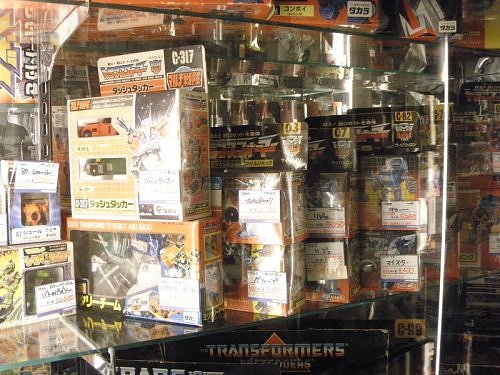 Again, nothing to call home about. Notice that they placed a reissue Hot Rod with the vintages. A little odd if you ask me. 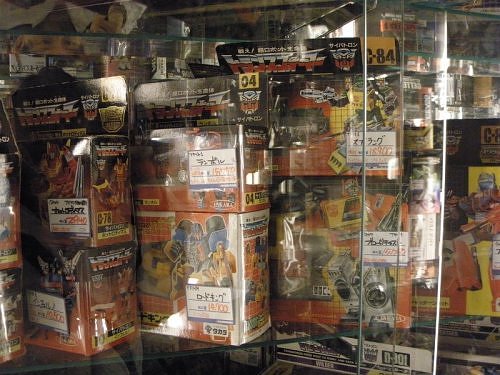 This is perhaps one of the more interesting shelves - some MOSC European stuff, G2 Cliffjumper and Beachomber, ActionMasters, etc. I was initially very interested in the Frenzy & Laserbeak set, but on closer inspection, I was appalled to find that it is a Zhong Jin KO!!! Imagine that, Mandarake mistaking a KO for the real thing and selling it as a real item! WTF. This is so wrong. Can't speak Japanese, so obviously can't tell them about it in a way they would understand. 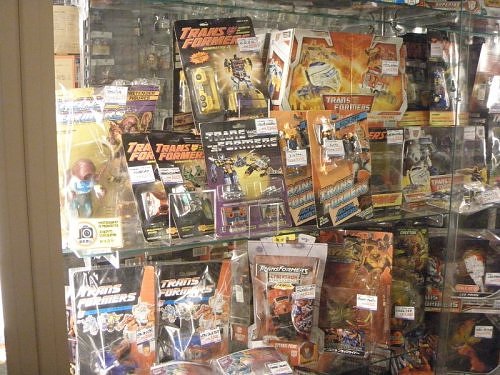 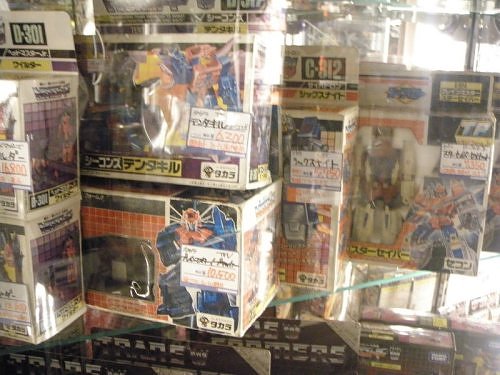 A shelve of TFC Reissues. These appear to be the entire series, which is quite impressive. 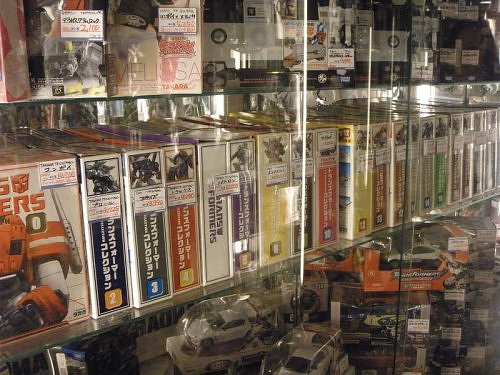 Encore and later reissues. This is the point where E asked, "Why is Mandarake selling reissues. Does not seem right". Yeah, I thought that's odd as well. I mean selling some limited edition, lucky draw or eHobby reissues is one thing, but to sell run of the mill reissues from lines as recent as Encore next to vintages just does not sit right with me and appears contrary to the business case of a store which professes to specialise in vintage toys. I am seriously disappointed with the Akihabara Mandarake at this point. 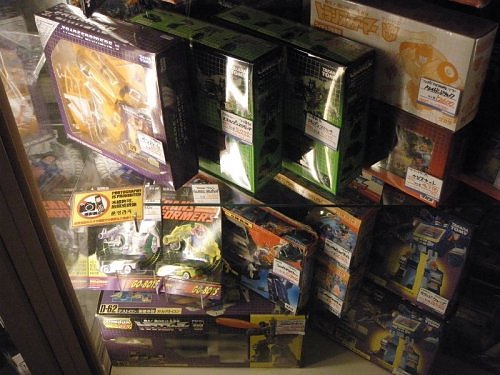 This is about as good as the pre-Transformers shelve went - Diaclone Inferno and U.N.C.L.E. version Megatron. Meh. 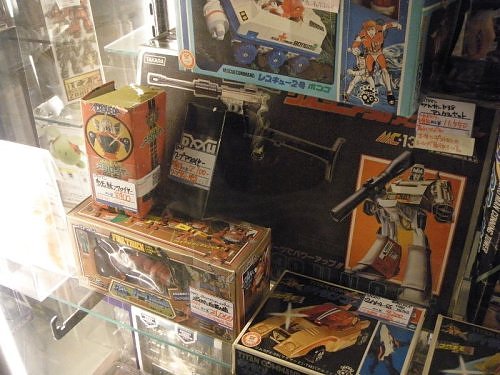 While the toy section was hopelessly disappointing, the books section of Mandarake did yield some treasures, which I will show later below.

Went to Liberty Store #7 after Mandarake and it was equally dismally disappointing. It had one, yes one, G1 item - a tattered MIB Scourge. Meh and Meh.

At least we saw an interesting cafe on the way back to Shibuya. I told E as we left Akihabara, "we don't have to revisit this place again during the rest of our trip. Utterly disappointing". 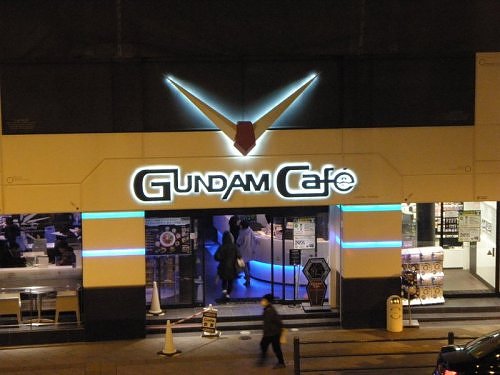 We next headed to Shibuya in search of, hopefully, some Transformers joy. Shibuya was also dried up of TFs. Man, what is happening? I did however, manage to get a number of pretty novel items from here.

Acquisitions for the day
From Mandarake Akihabara: 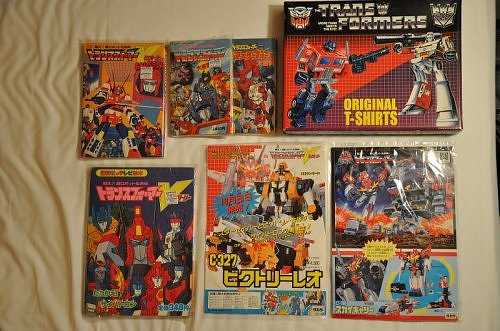 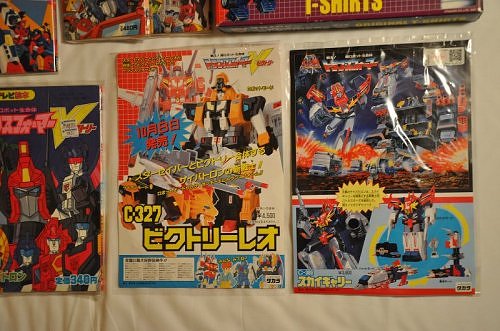 I bought this more for the box than for the t-shirt. Such a great box! It was MISB but E wanted to see the t-shirt, so she opened it and made me wear the t-shirt. 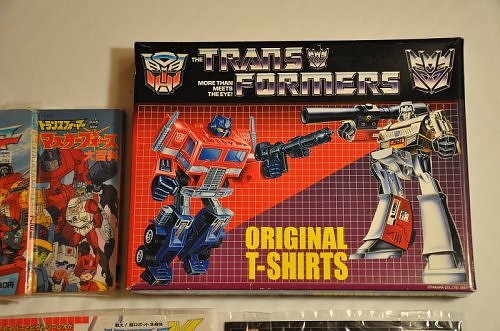 It's a Decepticon t-shirt, how heroic! 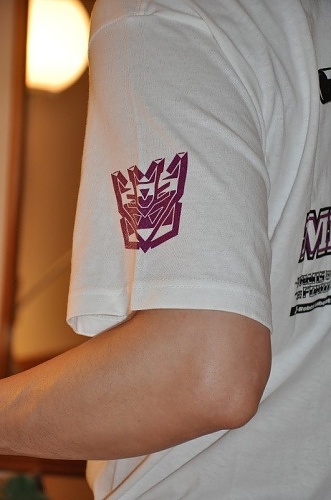