I bought my MISB Rotorstorm of a buddy, also a good online Transformers seller, Specimen-17, a week or two ago. I was (mildly) interested in Rotorstorm way back in 2007 when a friend AR bought it from eBay has it sent to the office and opened the parcel there.

We fiddled around with the toy during lunch and all I could remember was that I like the colour scheme - hey, blues and pink seem to work well. That's that and I forgot about Rotorstorm and, as with most Euro G1s, never had him on my acquisition agenda. That is, until IDW's 'Last Stand of the Wreckers'.

You can think it and say it now, I'm one of those fickle-minded, easily influenced collectors whose want list is easily swayed for portrayals of characters in official media, especially if I like the storyline (which in LSOTW's case, I did). Happened with Dreamwave's portrayal of Sunstorm, happened again in IDW's LSOTW.

For a good part of 2010 and 2011, I was looking for a nice Rotorstorm figure and Specimen-17 was also trying to help me out. It didn't come to pass. In recent months, I bought a job lot of Transformers from an Australia seller (he sucked), which included Rotorstorm, claimed to be complete and mint. What arrived on my doorstep was a Rotorstorm figure that was okay mint, 2 missile launchers that were okay mint, helicopter blades that were not mint (one was broken and badly glued back, thus it sagged) and.... nothing - all 6 yellow missiles were missing.

A Rotorstorm in that kind of condition just didn't cut the mustard with me, so I wrote it off and considered Rotorstorm still 'unacquired'.

Enter Specimen-17 again in 2012, who 'saved' me with a minty (because it has to be) MISB Rotorstorm! 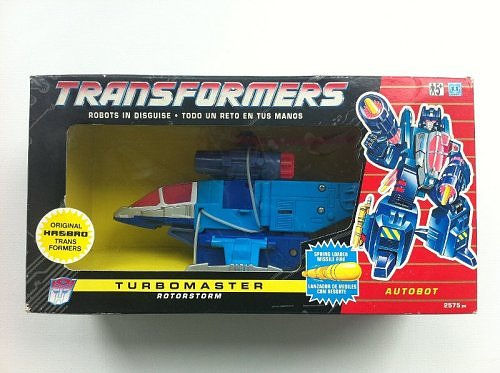 "Original Hasbro Transformers"? I wonder why they had to say that. 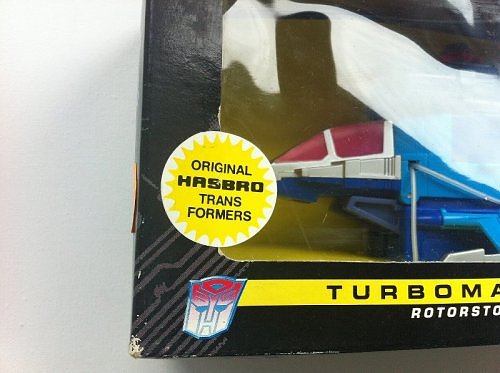 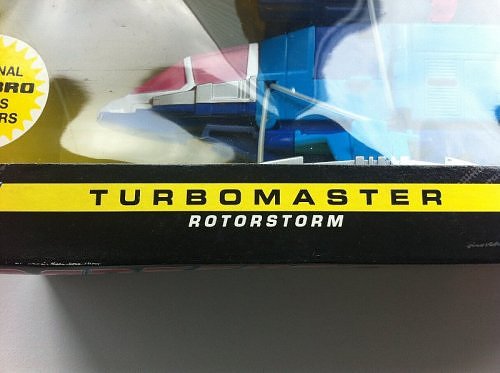 The box art, it's that nice. 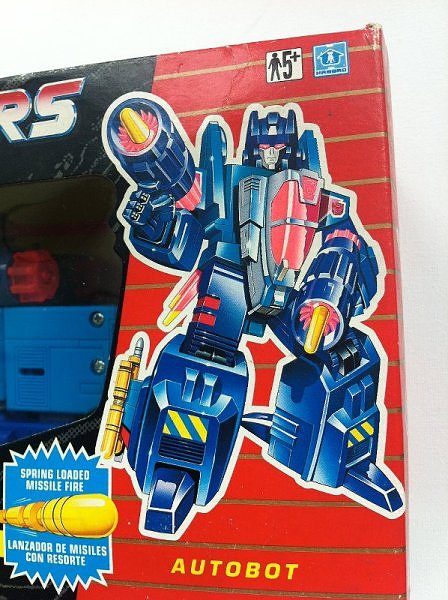 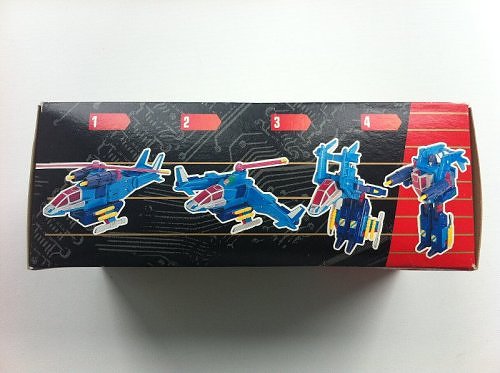 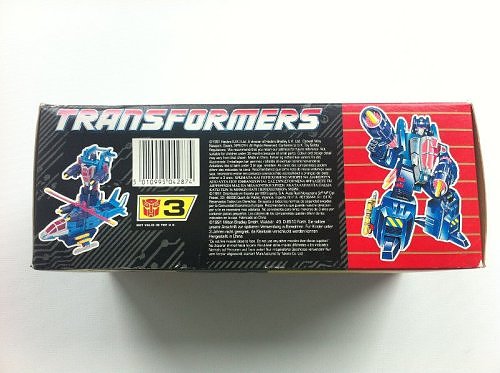 Back of box with painted Euro battle scene 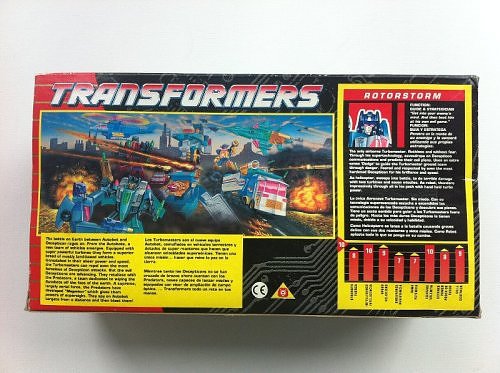 Close up of battle scene. To be honest, not as nicely drawn as the 1984-1988 battle scenes 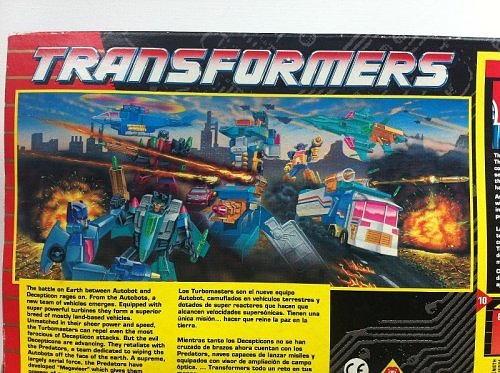 English text of on the back of box 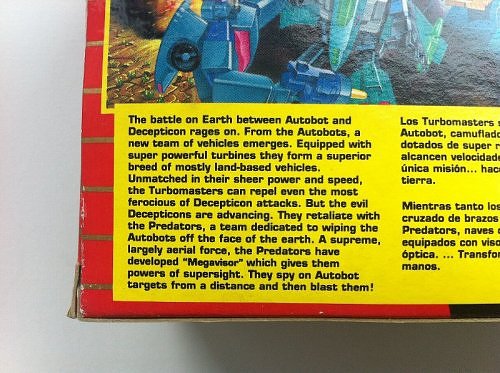 Close up of Rotorstorm tech specs 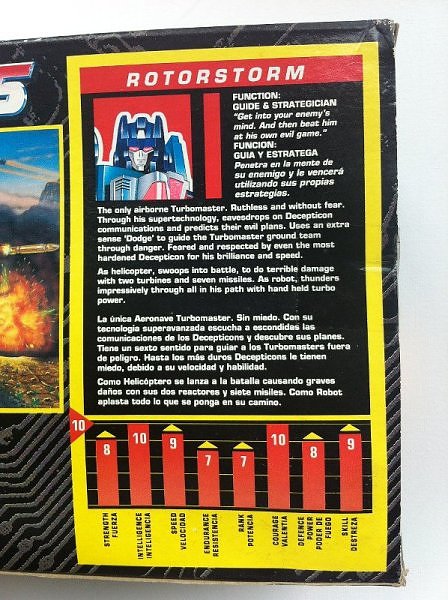 Side of box confirming it's MISB-ness 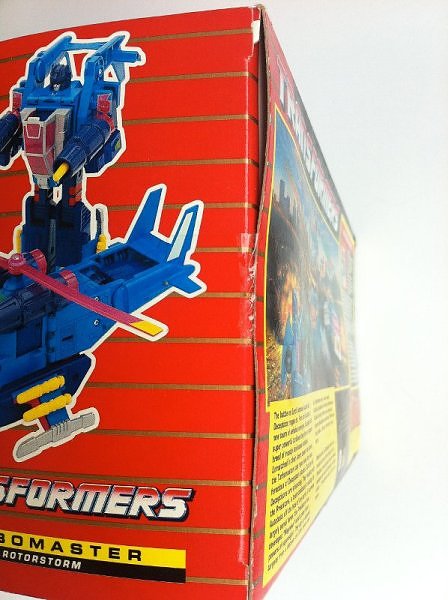 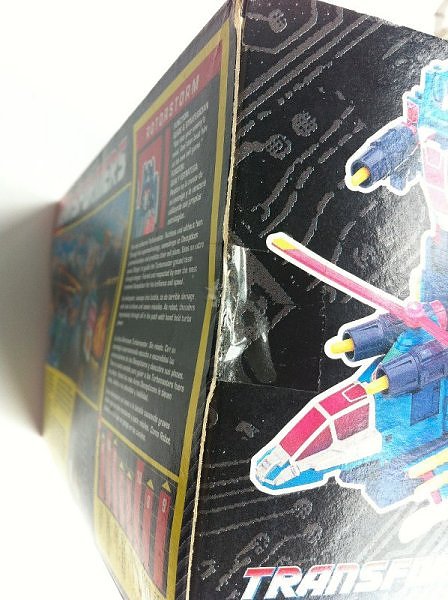 Posted by Heroic Decepticon at 18:36