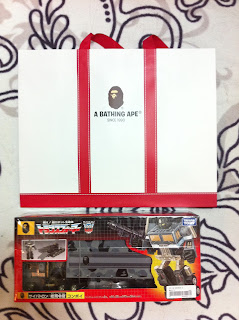 It's not often HK gets things later than other parts of the world, but the BAPE Convoy is one instance where we get things later. I know that Singapore already received and sold out its batch of BAPE Convoys - my buddy Cave Collector wrote about it here.

Today was the day BAPE Convoy (grey camo version) would be released in HK. I woke at at 9am to go queue for it. Fortunately, the one and onlyBAPE shop in HK is just 5 minutes walking distance from where I live.

Here in HK, queuing is a very regulated art form. I received a queue number when I arrived - my queue number was "32". Damn, by 9.30am there were already 31 people ahead of me?!? I was told to return to the store at 12pm, it's official opening hour, to purchase what I wanted.

I then walked home and found E already awake. She said she wanted to get a BAPE Convoy too, so I said 'okay, let's go get you a queue number'. We walked down to the shop again and I think it was 10.15am or something and E got a queue number of "44".

These are our queue number cards, with the today's date on them (hence not reusable). 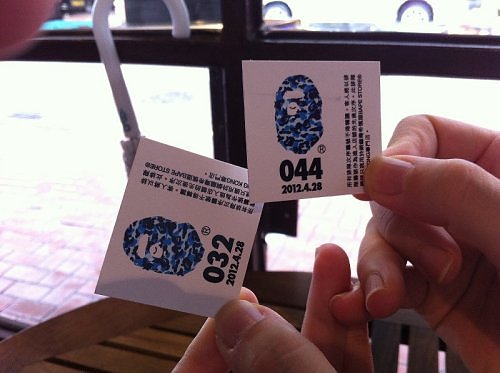 After picking up the queue numbers, we went to this cafe called "18 Grams" to have coffee and breakfast.

Caviar, eggs and toast. Nice way to start the day. 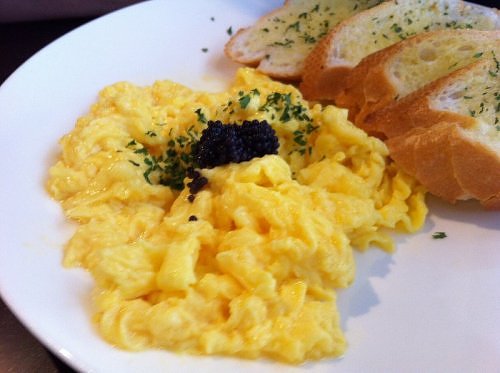 At around 12pm, we returned to the BAPE shop. By this time the shop assistants were already asking people to queue up according to their queue number, outside the shop.


This was the queue to the entrance. 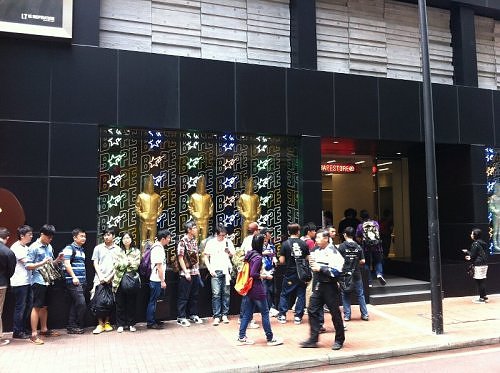 It stretches round the building. What they would do is allow 2-3 people to go in at any one time and they have to nominate what they wanted to buy. BAPE Convoy was not the only exclusive thing on sale today and so not everybody in the queue was actually after that.

I noticed this trend - those guys that has a girl with them (either wife or girlfriend) are the ones after the BAPE Convoy (the wife/ girlfriend will be made to buy one too); and those solitary people in BAPE clothing or apparel are actually after the BAPE products. Strange huh? 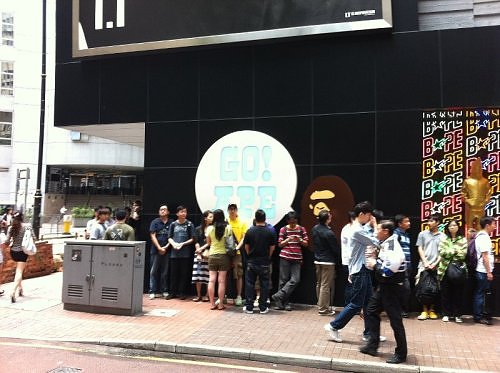 The queue to pay. Again, paying is also by ticket numbers. Oh, I saw a family of mum, dad and their baby. They used their baby to take one queue number and the baby also "bought" a BAPE Convoy - ie: these people bought 3 BAPE Convoys in total. Make of that what you will.

By the time it was E's turn to pay, the shop had sold out of BAPE Convoys already. by pure speculation / estimation, there were perhaps 50-60 pieces only (noting that some people in the queue ahead of us did not buy a BAPE Convoy and that some people after us managed to get one). 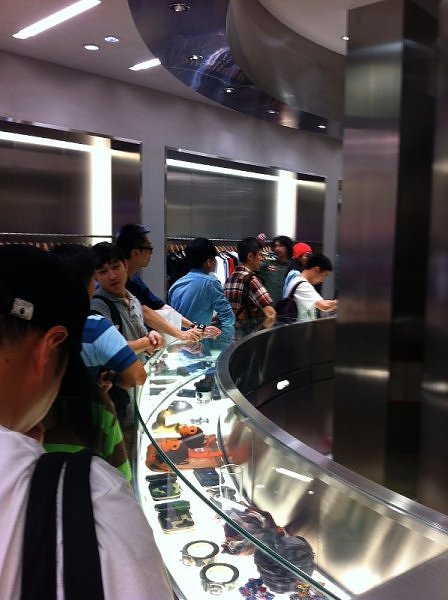 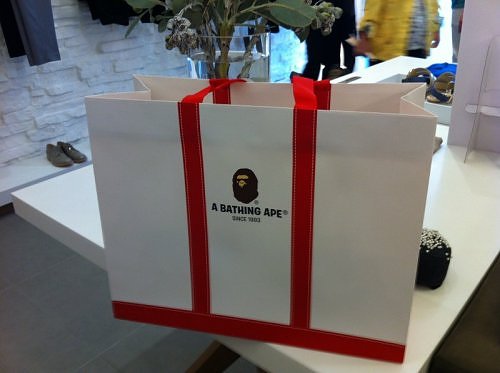 E's BAPE Convoy on the left and mine on the right. I also bought 2 pieces of BAPE clothing. In case you are thinking why I bought 2 pieces and that I might be scalping, I'm not. We each wanted a piece. E paid for her own piece and its hers. Not mine, and not for resale unless she does not want it. 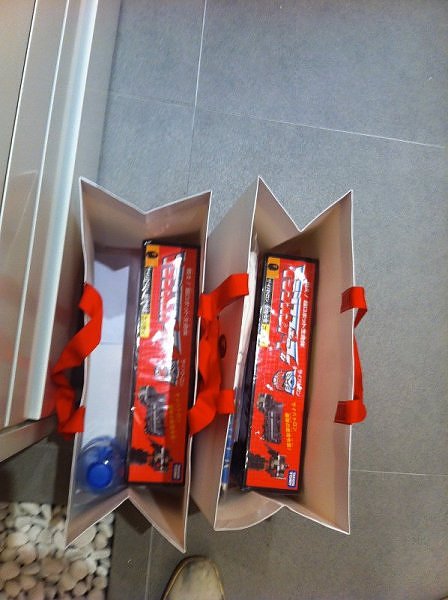 The BAPE Convoy. The shop wrapped it in clear plastic wrap for us. 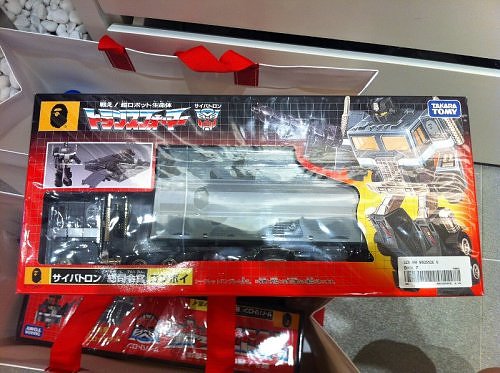 After BAPE-ing, we had lunch and walked around for more shopping and more excitement.

At around 8.45pm this evening, I made the largest acquisition in my life (so far). But that is a story for another time.

I snapped a few more pictures when I got home. I just thought the BAPE paperbag looks so good and wanted to take a shot of it with the exclusive Convoy. 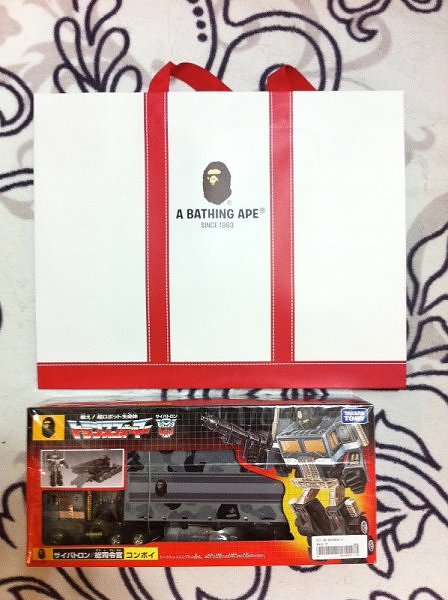 Both our exclusive BAPE Convoys. 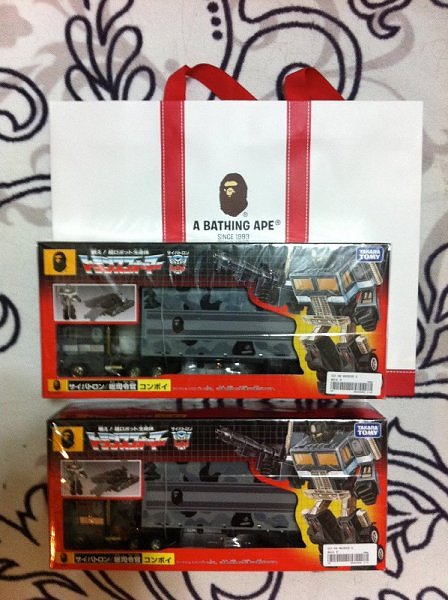 Posted by Heroic Decepticon at 22:21