Since young, I have been quite torn over which exactly is the motto of Megatron. If the Dreamwave MTMTE profile is any evidence, it appears the ‘Peace through tyranny’ has won out as it rightly should. ‘Everything is fodder’ just sounds a little too shallow for a Transformer with as much depth as Megatron.

Like the colours on a Van Gough, I remember vividly the first time I saw Megatron as a kid. It was evening. Mummy, my brother and I were at OG People’s Park walking through the toys section as usual. We walked by the Transformers section and there being screened on a little TV was an episode of the G1 cartoon episode I would know as Transport to Oblivion years later. It was playing the scene where Megatron and Soundwave (or was it Starscream?) were outside a cave of closed in Autobots; Megatron transformed, Soundwave (or Starscream) held him and blasted the cave roof down to trap the Autobots with finality.

‘What? What?!? What just happened?’ was my first reaction.

A huge robot who transforms into a little gun, blasts a cave down then transforms into a menacing robot again. That must be the most blasted coolest thing (pun intended). From what he did, his general colour scheme and his red eyes, I got the feeling he must be one of the baddies – little did I know that he was the baddest of the baddies, Megatron, the slag maker himself.

‘Oooooohhh. We have to watch this when Channel 5 shows it.’ I told my brother excitedly. He didn’t reply, he was grinning from ear to ear. This moment was where the impetus to watch Transformers came- it is the prologue to The Origin Story.

Sometime down the road (weeks, months, I’m not sure), I managed to convince mummy to buy a G1 Megatron for me while we were on the way to Chinese tuition. I was so excited I opened it and applied all its decals en-route. I later decided that a chrome Megatron just didn’t look enough like the cartoon so I spray painted him white. Hahaha… Miraculously this was passed to my cousin, CF, who volunteered to ‘return’ it to me in 2004! My childhood Megatron can be seen here... 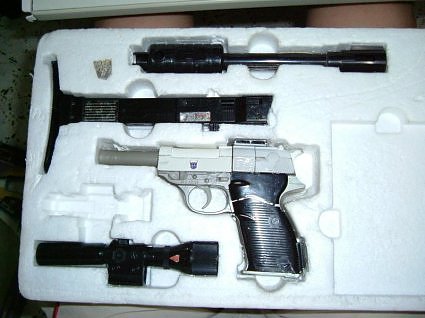 My childhood Megatron, painted white by me

The menace is in the styrofoam insert if one wants a MIB Megatron – I wanted a MIB Megatron and because of the history I had with this character I demanded it had to be perfect. At least as perfect as it can get without being MISB. The toy, the box and the foam insert had to be tip top, unbroken and mint at the very least.

I noticed that 9.9 out of 10 Megatron packing foams have a piece broken off (see below). I obtained a MIB Megatron in a C6 box and broken foam in 2000 and it was deeply unsatisfying. I had to hunt for a better piece. The challenge was to find one with a nice box, unbroken foam insert, with a toy in good condition and at a good price. 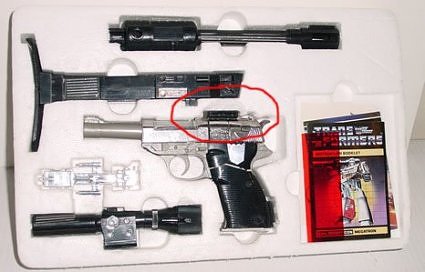 I went through local shops, flea markets, Classifieds, Yahoo! Auctions and eBay for years. It took me more than 3 long years to finally get what was in my heart, the perfect Megatron. To top it all off, I got it during a lull in the Megatron prices. I bought it at US$112.50 (approx. S$220 inclusive of shipping), which is relatively cheap all things considered.

Here it is in its full glory, the menace of Megatron. I now present from me to myself what to me is the perfect MIB Megatron: 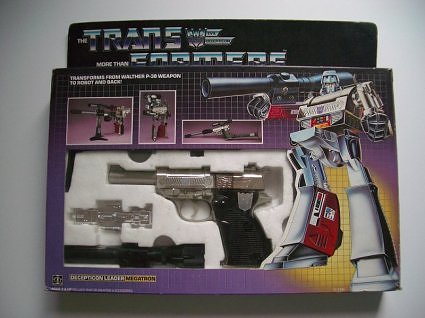