I moved to Australia from Singapore on 18th February 2003. The move was academic, literally.

It was on the whole a good move, but one that ultimately created disadvantageous complications for my Transformer collecting.

There were hardly had any speciality toy shops and no weekend type flea markets in Australia . Hobby Co. was probably the only ‘toy’ shop but was more focused on model kits and scaled train sets. Suddenly, my Transformers buying world shrank from limited only by your imagination back in Singapore to your imagination is all you’ve got mate in Australia .

Seeing that a flea market or speciality toy shops is all but non-existent, I turned to look at the prospects for new and current releases (eg: Alternators, Binaltech, Cybertron, Titanium and Classics). I soon discovered that new releases comes with price tags that are completely outrageously ludicrous. It seems like the only out is eBay.

Between 2003 and 2006, I continued to fatten my collection using eBay. Which is just as well, because a large proportion of what I needed at that point in time are G1 USA boxes and instructions and maybe the occasional accessory. As a rule of thumb, I mostly buy from US sellers and will avoid using eBay.com.au. This is explained here.

The highlight was of course this (for obvious reasons): 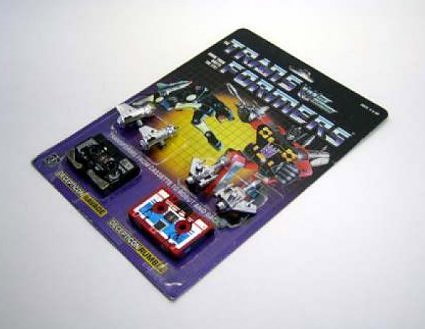 To fund my activities, I also bought huge lots of Transformers to resell. One example is Lot 1870, here.