Somewhere along the lines, and it is a blurry sort of somewhere because I don’t know the somewhen of it, I felt that the loose figures I have are notionally missing something. They are missing their boxes! They are missing their beautiful G1 US boxes. I realized that part of what drove me to buy a certain Transformer in the 80s is the box art and to a certain extent the box top, sides and bottom. I just have to have all Series 1, 2 & 3 boxes and cardbacks.

Continuing along the somewhere line, I also found that I could no long tolerate any of my Transformers in a bad/ worn/ faded/ chipped/ broken condition. I just would not stand for it. I’d rather not have that piece. I actually sold off a chunk of my collection due to this new agenda. Pedantic, illogical and irrational I know, but nice toys is satisfying.

This brings us to collecting objective (6) and (7) but before that a recap of Objectives (1) through (5).

Objective (6) Every Series 1 to Series 3 Transformer should be what collectors term ‘110% complete’ – That is with a C9 box, instructions, unapplied or used sticker sheet, tech spec decoder and relevant catalogues (including Glow in the dark poster/s for movie characters).

Objective (7) Every figure to be ‘upgraded’ to C9.5 condition with matching sticker condition (if they are not already in C9.5).

Armed with new objectives, I assiduously collected as much as I could before leaving for Australia in 2003. 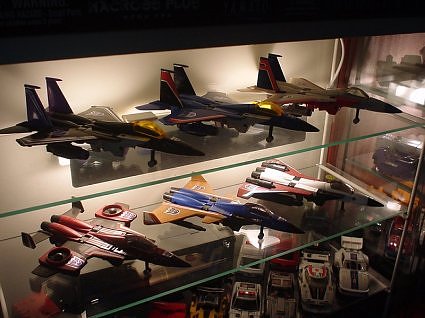