The joy of giving...

I often talk about buying Transformers.

I talk about buying Transformers from flea markets, garage sales and eBay. Now, what if one of these people who could potentially be selling their wares at one of these places happens to be my friend?

‘Whoa! Yes, of course!’ was my excited reply almost falling off my chair.

YK invited me over to his place which was a 5min walk from my apartment. He gave me the following Transformers, all complete, all kept tidy in a shoebox: Hot Rod (Targetmaster), Springer, Scattershot, Nosecone and Lightspeed. I was more than overjoyed. A Hot Rod (Targetmaster) back then before the reissues can easily command around S$250 complete; Springer had ever been expensive and still is now; and to top it all off, I suddenly have 3/5 of Computron! At 9pm at night, I was holding a shoebox and walking home with wings at my ankles. 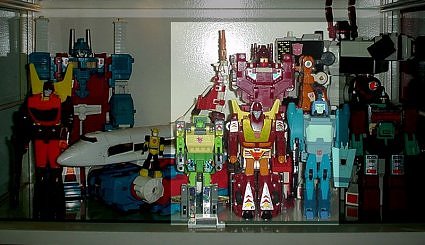 Springer, Hot Rod and 3/5 of Computron. Thanks YK!

WT gave me his Transformers after I gave him a lift home one day. I barged into his room and said ‘Show me your Transformers!’. Bar the reissues, he had the most beautiful Powermaster Prime and Sixshot that I’ve seen till this day.

‘Sure. Take them. I have no use for them anyway.’ Was his matter-of-fact reply.

Grabbed them and ran for it before he changed his mind! 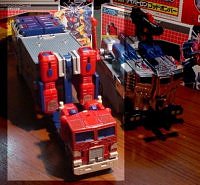 Those were the best, biggest and most valuable Transformers I have been given. It’s not much I know, but I think it’s a great feeling to have a piece from my close friends' childhood in my collection. That thought just makes these that much more valuable.

I silently made a promise to myself that I am to be the guardian for their toys, taking care of them and placing them alongside mine but I will never under any circumstances sell them.

I will still not sell these 7 pieces even if there comes a day when I decide to sell all my Transformers. I will either keep them or return them to their original owners.
Posted by Heroic Decepticon at 19:03