The years 1992 till 1998 were uneventful where Transformers were concerned.

I did various things. These varied from winning Snooker competitions to getting severely injured while doing freestyle bicycle stunts to serving in the army as part of compulsory National Service.

1999 was my first year at University. In it, there is this place called 'The Forum'. It was near my Faculty. On a most normal day in the most normal of climates I walked by the Forum for the most normal of reasons - to get lunch. There was a flea market type bazaar for charity going on. I walked past a table with some indisposing figures on it and... wait. What did I walk past again?

Standing right there in all their grandeur was Star Saber, Snapdragon and another 2 large Transformers I do not recognize. Star Saber! It's a toy I have always wanted from 1989, especially after being inspired by episodes of Transformers: Victory which screened every Saturday morning on TV3.

"How much is this?" I asked pointing to Star Saber.

"And this?" I continued, pointing to Snapdragon.

"What about this and this?" I asked pointing to the other 2 large Transformers.

"They are all $4.00! Hey, if you want Transformers, I will give you this 4 and this whole bag for $30.00." she snapped while taking out a plastic bag filled with Transformers and Transformer parts. The bag was about 60cm in diameter and mostly filled with Headmasters, Targetmasters and toys from the Victory line.

"Ermmm... I'll have this 4 for $15.00?" I asked gleefully, not wanting the trouble of carrying a whole bag of Transformers into lessons.

"Yeah, ok. Take 'em. You want you can search for their parts in this bag." she snapped, knowing that she'll get rid of me soon enough.

I paid, said thank you, took the Transformers and left. 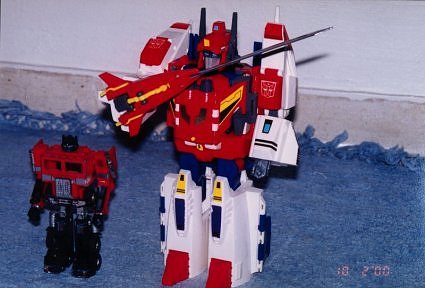 Left: Optimus Prime with custom blue eyes by me from my childhood
Right: Star Saber from 1999 NUS Charity flea market

I was really happy. I now have Star Saber! This guy has eluded me for a decade. At this time I had very little Transformers left, but still, I wouldn't mind a Star Saber and this other 3 to keep him company.

I soon started thinking that Transformers were cheap, cheaper than they used to be. Maybe I should try looking for more, looking for all those that eluded me back then. I started going to this flea market where sellers predominantly sell toys - Clarke Quay flea market.

I saw so many familiar faces the first Sunday I was there. It seems that a bunch of my Secondary School classmates were also interested in getting Transformers that eluded them back then. I got one of them over to my place to appraise the 'value' of my $15.00-for-4-Transformers lot.

His eyes widened like he saw a gold mine "You got them for $4.00 each? WHAT?!? You know what you've got? No? You have Star Saber, Snapdragon, Deathsaurus and OVERLORD and they are all complete!"

I have Overlord. Overlord? Who in blazes is that?

"Ok, thanks pal. Are these good stuff?", I tried to be persistent. 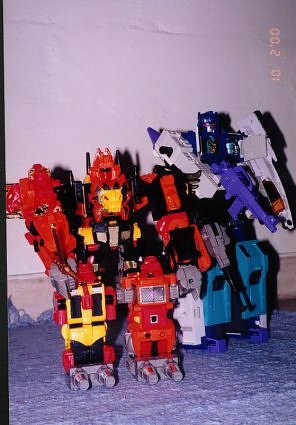 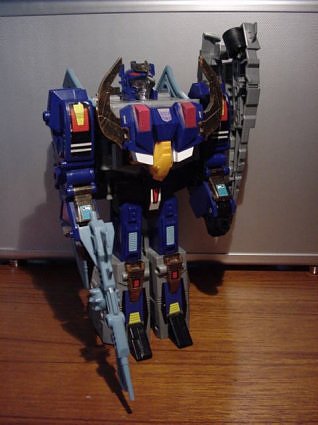 Silly me. I would soon discover that the 'cheap' stuff I bought is not only good C9+ stuff but also very very expensive on the secondhand market.

Soon, I was meeting up with this bunch at Clarke Quay every Sunday. We talked purely about Transformers. As weeks rolled into months, I slowly found that I recalled not only more and more Transformer names but also their abilities, profiles and weaknesses.

That was when I realized Transformers was not something forgettable, it was not something I left back in the early nineties with He-Man, M.A.S.K., TMNT, Starcom and that rest... it was something ever close to heart and it was surfacing now, as I re-awaken into the world of Transformer collecting just before the turn of the millennium.