‘Nah. I don’t think I will want that’ was my reply to RSLH’s questions moments before.

He had said ‘New eHobby releases. Heard they are called Sunstorm and Road Hauler? S$80 per set. You want one set?’ he said pointing to the lot of about 8 Sunstorms and Haulers stacked like a layered cake on the top of the glass cabinet.

‘Nah. I don’t think I will want that’. What the?!? What was I thinking? S$80 for both Sunstorm and Hauler MISB, C10 boxes – I should have bought them without even blinking. Stupid, really stupid. I had my excuse though.

Back in 2003, the Sunstorm & Hauler set was released, at least in Singapore, at the exact same time as Armada Unicron. I had seen Unicron images on Seibertron and TF Kenkon while in Australia and swore to buy this figure when I returned to Singapore over the Christmas break. This was a figure that I (and most fans) have literally waited 17 years for since Transformers: The Movie in 1986.

I wasn’t going to let the chance slip. In fact, I am going to buy 2 of these babies. They were selling at TFH for S$140 each, meaning that 2 would cost S$280. I had no time for monkey business, I had no time for Sun-whozzat and Haul-whazzit – I-just-wanted-my-Unicrons.

So there it was, a bad mistake for 2 reasons.

Number One, Unicron at S$140 is grossly overpriced. When the general release came out, it was retailing at S$99.90 at all major retailers. This means that I paid S$80 ($40 x 2) more than I should – enough to get me a Sunstorm & Hauler set.

Number Two, I was not short of cash and would normally have bought a seeker even if it were a recolour. That Sunstorm was later featured in Dreamwave’s G1 Vol 3 as the main protagonist making his price skyrocket is another painful reminder to the dreadful mistake I made. Worse of all, I felt my heartstrings pull toward getting the Sunstorm figure after I have read the Dreamwave Sunstorm arc.

I trudged through eBay with a heavy heart for weeks before finally winning an auction for a Sunstorm & Hauler set at a reasonable price. The up side is that this auction included the original eHobby packing box that the set came in. Awhile later, I bought another individual Sunstorm to play with and display.

eBay Sunstorm & Hauler auction win... on the Christmas of '04. Merry Christmas to me! 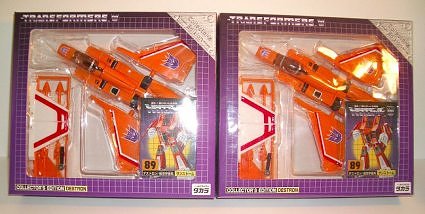 My 2 Sunstorms MISB
This was all good timing at least because a Sunstorm on its own now costs in excess of US$200.

Posted by Heroic Decepticon at 12:12