If you would recall from the previous chapter (link above), the deal for Marlboor Wheeljack was worked out on 28/29 May 2011, with payment made from the buyer to me on 29 May 2011.

I said that I got cash and value out of the deal - the value of course, coming in the form of the blue Bluestreak.

I actually got more value than that.

Due some silly circumstances, there was actually a ridiculous situation going on in the background - at these crucial few days in time, I actually needed the substantial amount of cash from the Marlboor deal to pay for another deal that I negotiated(!)


It was a damn circus.

But, like I said, I did get more value out of the Marlboor deal and the buyer's timely payment than just the blue Bluestreak.

While I paid on 30 May, the dino-cassette seller did not manage to ship them out all the way till 4 June 2011. That's a week delay, but that's fine.

He shipped express from UK, so I was told to expect them around 7 June 2011 (Tues). The tracking records did disclose that they have arrived in HK on 7 June, but somehow, they got stuck in customs (for no apparent reason) and did not get delivered to me (at my office).

On 10 June 2011 (Fri), they were still not delivered. I was very concerned. I actually called up HK Post and submitted an email query to check what was happening. This was the first time ever in my 12 years of collecting that I have been this worried about a figure in transit - all of the other times, I won't even bother keying in the tracking number to verify progress. I just took a "it will get here when it gets here" approach.

This was different. I was worried.

13 June 2011, Monday morning - I got a call from HK Post to say that they tried to deliver the parcel on Saturday, but there was no one at the office to receive it (office not open on Saturdays), and they will 'try' to deliver it again on that day.

I was just in a tangle by this point.

Fortunately, in mid afternoon, reception called to ask me to sign for the parcel.

Whew. What a roller-coastal ride. It's a very strange set of events. On the one hand, it seemed that the stars favoured me, but on the other hand, there seems to be an equal and opposite force that was working to make things difficult.

So glad that I finally managed to obtain my 4 little holy grails (and really just in the nick of time before the damnable KOs are released, after which I would never dare to buy these for fear of them being KOs.)

Here are some photos. 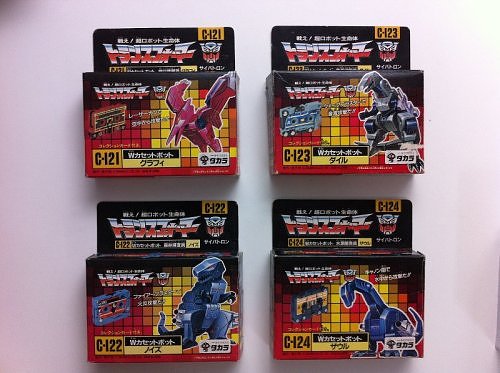 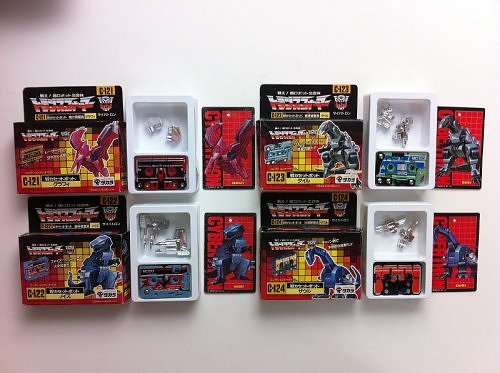 More photos and write ups of the dino-cassettes to follow of course.

But wait, during Part 2, I said "6 exquisite acquisitions". The dino-cassettes only make up 4. Where are the other 2?

Posted by Heroic Decepticon at 02:00