TFC, the Takara Transformer Collection series of G1 based reissues was released from July 2002 till March 2006. They are numbered #00 to #21.

TFC is perhaps the best line of reissues that we've been fortunate enough to get, in my opinion at least.

Here are my reasons for thinking so: (1) nice packaging with nice box art and unique original insert material; (2) faithful G1 toys with arguably better paint jobs and more accurate application of colours; and (3) some TFC reissues come with extra parts that are relevant to the G1 continuity but had never before been made or available.

A prime example of point (3), is that TFC #00 came with Prime's Laser Axe and TFC #06 came with Megatron's Mace- both weapons were seen in More Than Meets the Eye part 2 but never before released with the G1 toys. See here.

Below is a list of all TFCs and their 'specials' (denoted in italics). 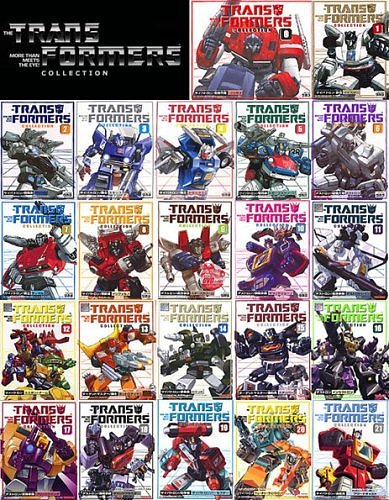 Gratuitous montage of the complete TFC Collection by Takara

Notes & Trivia:
[1] TFC #00: Optimus Prime was released out of numerical sync. It was released between TFC #06: Megatron and TFC #07: Sideswipe. Presumably, Takara planned to release the 2 leaders during the same period.
[2] TFC #11 to #16 has the special '20th Anniversary' silver crest at their top lefthand corner because they were reissued in 2004 (20 years after the beginning of Series 1 in 1984).
[3] The final released cover art for TFC #03 & #04 is different from the initial promotional art (shown here). I suspect that Takara wanted Pat Lee art on all the TFC covers, probably for consistency, and so they changed the cover of #03 and #04 to Pat Lee drawn Skids and Tracks.
My favourites in this series would have to be TFC #00, #06 and #09 for the extra cartoon relevant parts they come with. It's about time they remolded Bumblebee's face, so TFC #12 is great as well. I appreciate Takara coming up with TFC #11, #15, #18 because these used to be Japanese exclusives and before being reissued, command prices in the secondhand market that are way out of reach to most collectors.

Toward the end of 2005 and after repeated shipment delays, there was some doubt as to whether Takara would even reissue Blaster. They finally came through with Blaster in March 2006 but it appears that that will be the final TFC reissue, sadly.

The release of a new line of reissues, Transformers Encore, in August 2007 almost certainly means that the TFC line must have ended with TFC #21: Blaster.

Posted by Heroic Decepticon at 22:20