The Dragon and the Ape part 1: Snapdragon

When I was a kid... I was immediately taken by Snapdragon’s beautiful box art. It just made me think, ‘this guy is so cool!’; And then, there was the size and shape of the box. I was always (and still is) a sucker for seeker type rectangular but slim G1 Transformer boxes. Snapdragon’s box was of exactly those proportions but just bigger in overall size making him seem like some sort of ‘deluxe’ seeker.

Looking through the plastic window, I saw for the first time that Snapdragon is a jet – close enough to being considered a seeker even if he was not labelled as one. I wanted him almost as badly as I wanted Thundercracker and Skywarp, but sadly did not get around to even asking for him before Transformers’ eventual downslide in the early nineties.

On closer inspection, it dawned on me that Snapdragon not only had nice box art, a nicely proportioned box, can possibly be labelled a seeker, but he also transforms into 3 different modes: a jet, a dragon and a robot! He could just as easily qualify as a Triple-Changer! (or a quadruple changer if the ‘Headmaster mode’ is considered)

So there it was, beautiful box and box art, a Headmaster, a potential seeker and a potential Triple-Changer all rolled into one cool Transformer. What more could I have asked for?

As it came to pass, I never got Snapdragon during my childhood years. It was not until my first year at University that I even touched a Snapdragon toy (see story here). As it is, this toy is incomplete (missing 1 gun and 2 tail fins) and did not come with its box.

I was far from satisfied. I need to have the Snapdragon box.

In my mind the Snapdragon box has to be perfect to satisfy my childhood desires. It has to be as beautiful and as perfect as I remember it to be. It has to be C9.9. It has to have a clear flawless plastic window, flawless gloss and shin on all sides of the box, with nothing cut out and no flap crease. It has to be the next best thing to an MISB casefresh piece.

I was so fussy that it literally took years between when I first obtained the Snapdragon toy to when I finally got his box. So after almost 7 years (from end 1999 to mid 2007) and 3 Snapdragons l finally managed to track down what is in my heart the perfect box. 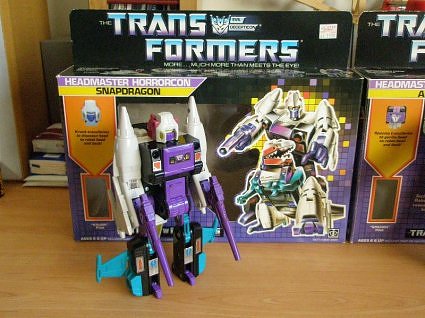 Next: The Dragon and the Ape part 2: Apeface