*This happened in around August 2005*

I had been denied Ravage for years. More than a decade in fact.

It wasn't until 2000 that I obtained my first Ravage from DL at the Clark Quay flea market for S$50. Quite a price considering that Ravage together with Rumble used to cost S$12.90 in 1985.

I now have Ravage. I should be happy. Should I? Somehow I wasn't quite satisfied. It still feels as though my 80s' kiddy desire for Ravage isn't quenched yet. Why, I asked myself. I wasn't sure even after obtaining another Ravage and a pre-rub Ravage bringing the total number of Ravages I have to 3.

I figured out what it was by 2005- I had to have Ravage and Rumble. And I had to have them on the card with the beautiful box (card) art to flank them. Yes, that is what it shall be.

I was in Australia by this time and so the only place I can find them is on eBay. Complete Ravage & Rumble sets on cards were pretty expensive and most of the time the card is defaced. An MOSC set, though extremely desirable, is also extremely pricey.

As it is, I chanced upon an eBay seller that was selling the Ravage & Rumble set and also the Frenzy & Ratbat set both mint on card. Both the cards were immaculate. The plastic bubbles were expertly cut out and not a shred of cardart was ripped. They were perfect for my needs and budget.

I consider that a bargain for Transformers in this condition...

Now, I am 95% satisfied but still hope to obtain an MOSC Ravage & Rumble set in future. 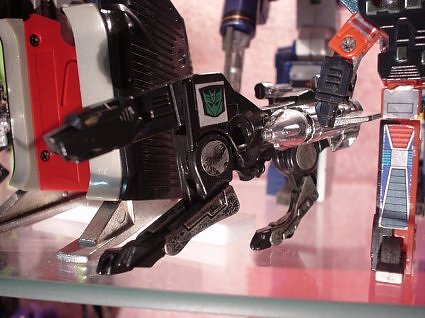 My first ever Ravage since being repeatedly denied in the 80s. Bought from Clarke Quay flea market in 2000.