The Dragon and the Ape part 2: Apeface

Yes, I was totally fascinated by Snapdragon (back in 1987).

I became even more fascinated when I discovered his ‘brother’ and contemporary – Apeface.

There wasn’t just Snapdragon, there was another guy like him! Another guy that transforms into a robot, a beast and a jet; another guy who comes with a same sized box and with complimentary box art and a colour scheme like Snapdragon’s. It was like they both should be bought as a set just like Darkwing and Dreadwind should.

How symmetrically beautiful and poetic.
How logical that I need to have them both- in C9.9 condition with perfect boxes.

The path to obtaining an Apeface was more convoluted and slightly more torturous than Snapdragon.

I came by 2 Apefaces in and around 2000/2001. They were both unsatisfactory. Variously, the stickers were bad or missing, there were broken parts, joints were loose and they were incomplete. Collecting Objective [7] decreed that I had to get rid of these, and I did.

The search continued until 2007, until which time I had obtained my MIB Snapdragon. I urgently need Apeface now, very urgently. These 2 can’t be apart just as Darkwing and Dreadwind cannot be separated.

There was nothing on eBay that was satisfactory. Nothing except this:

The above questions if they ever entered my head at that time were relegated to its periphery at best. I was more focused on how I could obtain this most excellent sample of Apeface.

I waited for the auction to end. The US$135 Buy-it-Now price was simply too high. I contacted the seller after the auction ended with no buyer and no winning bid. I offered the seller US$85 for Apeface with the amount totaling US$105 with shipping. He was kind enough to get back to me and counter-offered Apeface for US$120 inclusive of shipping.

I thought about it.

I thought about it more.

I weighed the value of saving S$22.80 or the chances of getting a MIB Apeface at the same price as Snapdragon versus the value I placed on having MIB Apeface now, right next to MIB Snapdragon.

As with most decisions concerning value to a collector, the result goes the opposite way of reason- I decided to go for the seller’s US$120 offer.

So here it is, the 2 Transformers I value almost equally (albeit I value Snapdragon slightly more), but paid vastly different sums for. 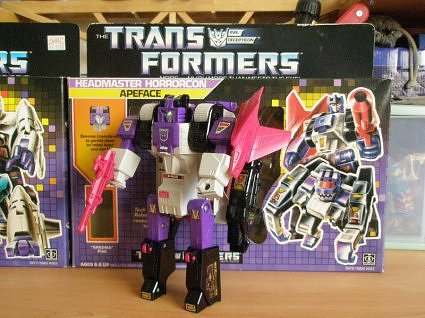 Next: The Dragon and the Ape part 3: Reflections