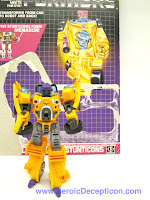 So this hit Hong Kong's shores yesterday - FansProject's Causality CA-11: Down Force, aka Drag Strip. According to TF Source, this has been renumbered, it was supposed to be CA-12. Oh well, what's a few numbers?

After a very intense and busy day of work, I met another buyer at the train station and sold him my loose Generations Warpath. Then proceeded to the toy shops to pick up Down Force. The weather today was really intolerable. Heat and high levels of humidity.

Out of the 4 not-Stunticon robots, Down Force was probably the one that I was most looking forward to. First, there is a strong yellow colour scheme, but second, its vehicle was also one of the more unusual vehicle modes among the other not-Stunticons, which were just 'vanilla' type cars.

Holding it in my hand, my strong positive vibes for this figure increased - the yellow body colour and blue windows works really well together. 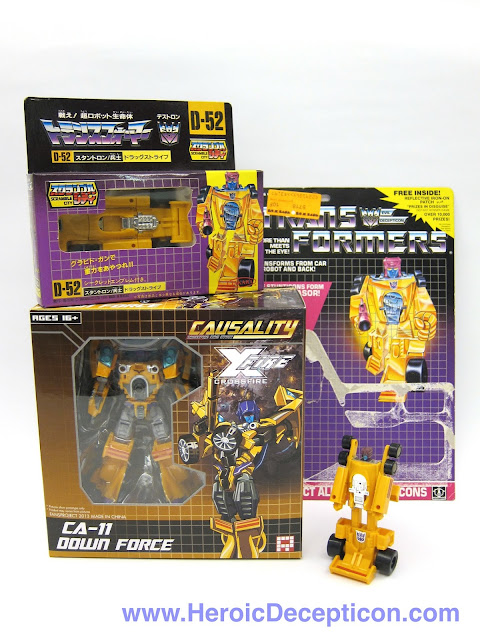 Front of the box. 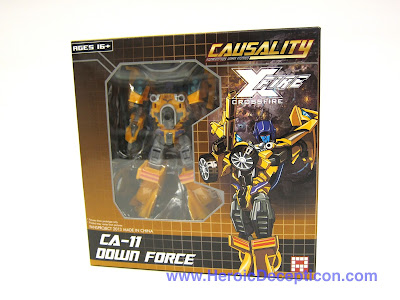 The box art, however, makes him look like a lady? 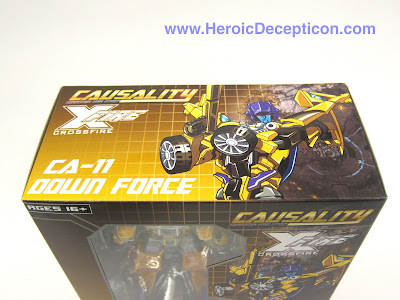 One side of the box shows a photo of the toy... 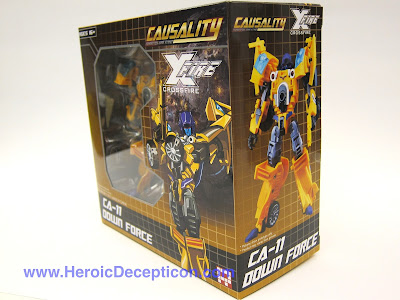 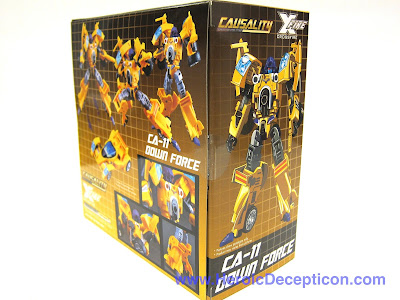 Back of the box showing poseability features. 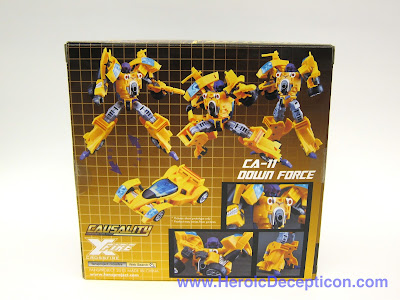 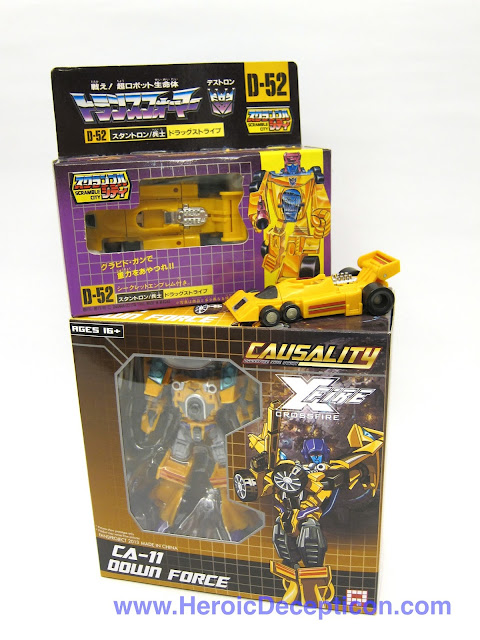 This is Down Force out of package, but still in insert. What's immediately apparent is that it does not come with any Menasor parts - no fist for example. 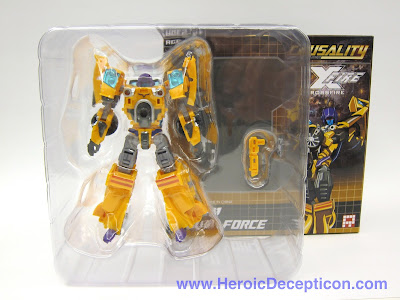 Hey look, after 27 years, my homage can actually do my card art pose... Botch will be so proud! 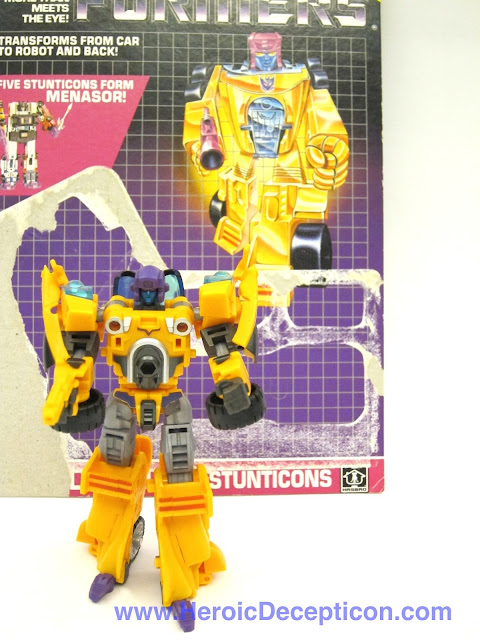 This is the robot mode. It is very nice. Nice proportions, nice colour mix and a really nice homage to Drag Strip, which to be honest is not one of the nicest G1 figures out there. 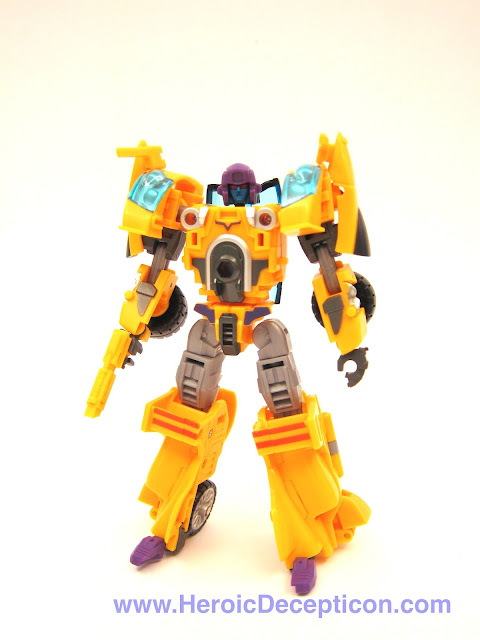 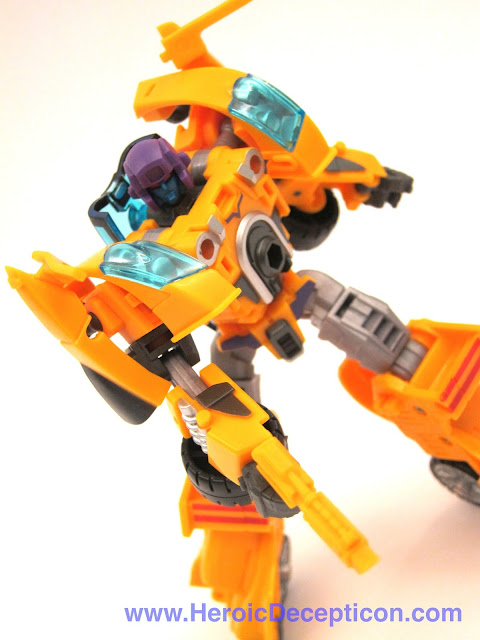 You know, if there were not already a Classics / Henkei Mirage, I'd say this is a strong candidate for a Mirage repaint. 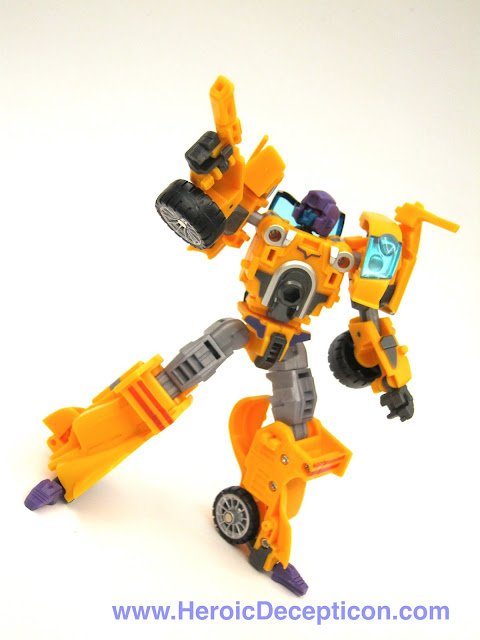 Next to its G1 counterpart. 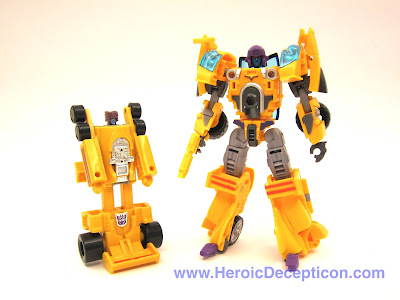 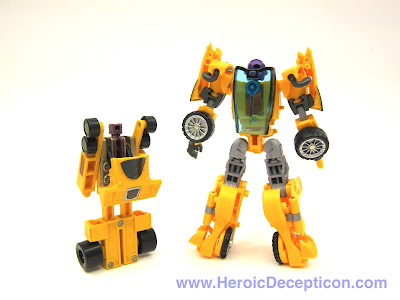 In vehicle mode, with its G1 counterpart. 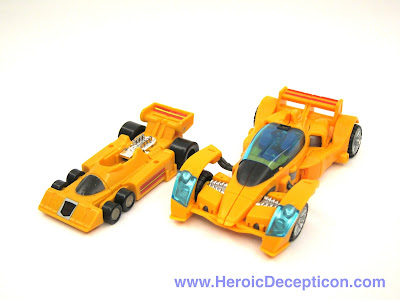 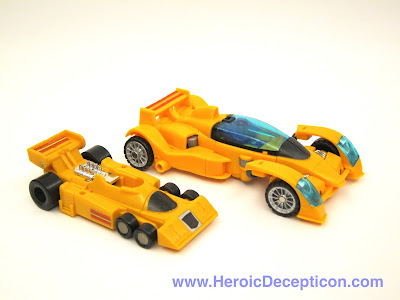 This is the car mode. I think it is meant to be some concept car. the design is great, the car looks very sleek and classy. However, one of the key issues is the slight difficulty with transforming it. I realised now that with FP's stuff, transformation is seldom intuitive. It takes awhile to figure it out. For this figure, its the front of the car portion (ie: the arms), that takes a little figuring out, that, and how to get the feet under the glass canopy. 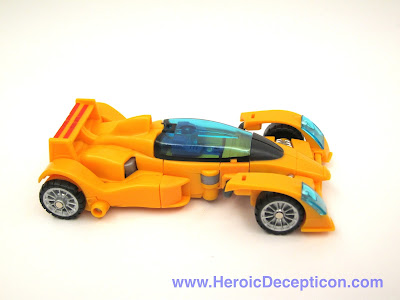 More shots of the car from different angles. 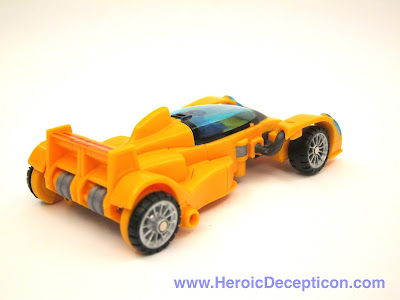 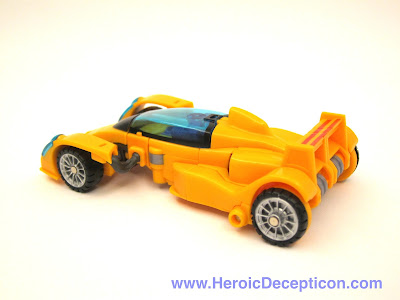 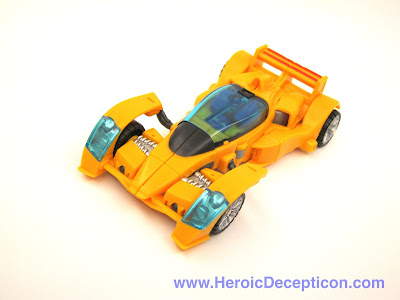 Yellow with yellow. CA-11 Down Force poses with Generations Sandstorm 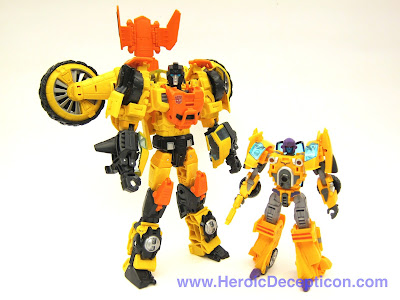 CA-11: Down Force with MakeToys Fallen! 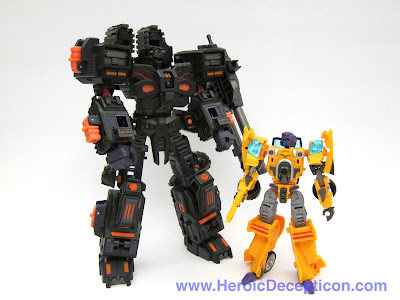 Final words - this is a nice figure and really one of the more interesting colour schemes among the Stunticons. It is certainly more fun than FP's not-Breakdown, which was horrid to transform and had sharp parts. If you are intending to have a third party Menasor, then it does not matter whether this figure is recommended or not - you'd have to get it, if not your Menasor will have an arm. Still, this figure is a very nice effort by FP.