Now, it's time to showcase these little gems, one by one. This is the second cassette, C-122: Noizu (aka Noise).

Thoughts:
The first thing I thought when I said Noizu was that 'I like his colour scheme'. There is something about this shade of blue he is in that works for me, somehow. To be honest, I think his transformation sequence from cassette to dinosaur is highly reminiscent is not substantially similar with Overkill's transformation. Even his dino-saur mode looks like Overkill. The similarities, of course, stop there - Noizu has additional engineering and can further transform to combine with Gurafi to form Decibel. In dino-mode, I'm not like the after effect of parting the legs for stability - it results in Noizu having '2 tails', which is weird. Noizu is otherwise my third favourite dino-cassette and I give him a rating of 7/10.

Noizu bio from TF Wiki:
"Noise (ノイズ Noizu) is one of the Autobot Cassettebots. A 'forest investigation' bot, he is their most violent member, and his fangs and claws are the strongest out of all of them. Noise idolizes his fellow dinosaur, Grimlock. As a member of the W Cassettebot sub-sub-group, he can combine with his partner Graphy to form the robot Decibel."

Further description: "Noise is a mini-cassette that transforms into what appears to be a blue Allosaurus. In tape mode, he fits into the chest compartment of Blaster or Soundwave (and their retooled reincarnations). Two silver "Fire Blaster" guns plug into the faux cassette tape holes by his arms. Noise combines with Graphy to form the top half of the humanoid(-ish) robot Decibel. Noise's cannons become over-shoulder cannons for Decibel." 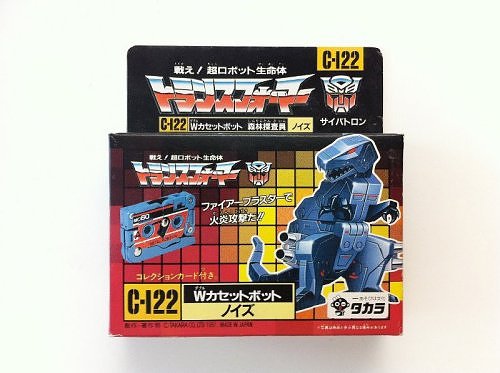 Close up of the beautiful box art 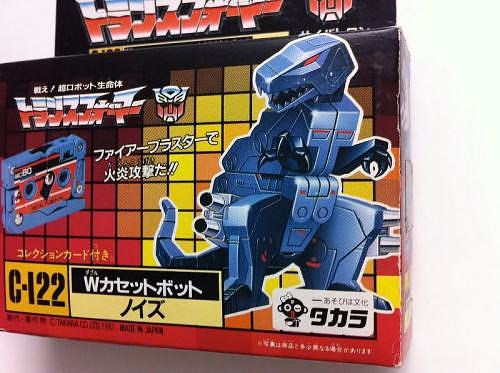 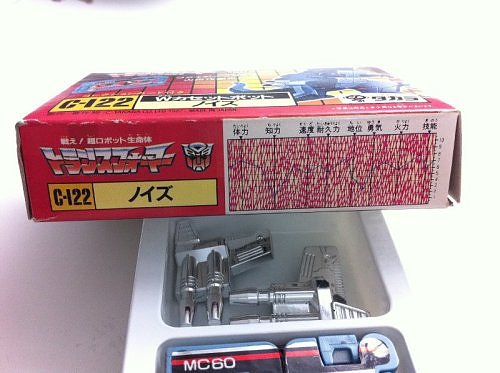 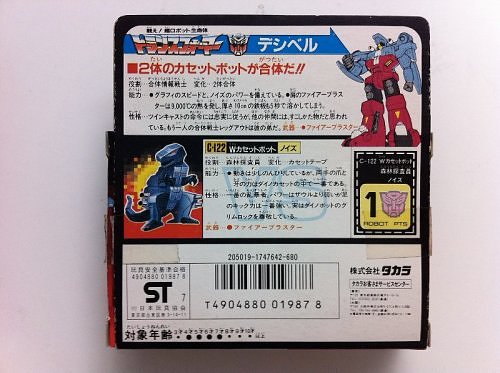 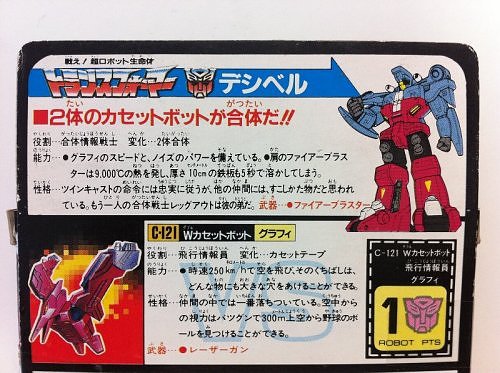 Noizu out of box - Noizu bio card, instructions and Noizu cassette and 2 weapons in insert tray - I like the large chunky weapons. 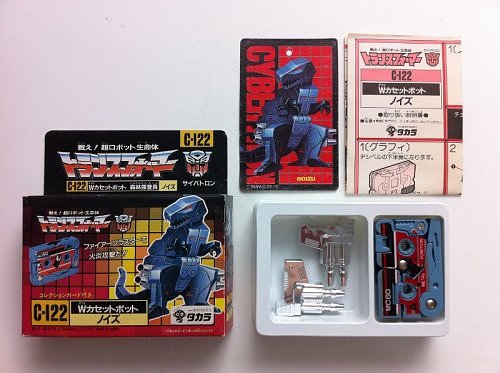 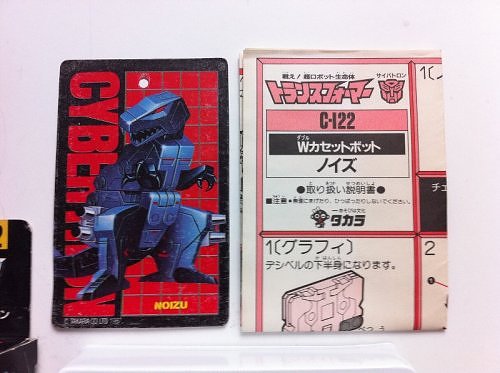 Close up of Noizu in cassette mode 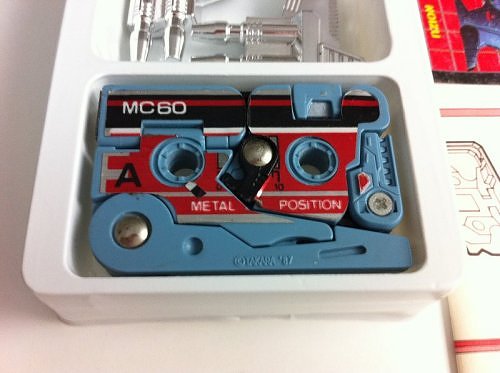 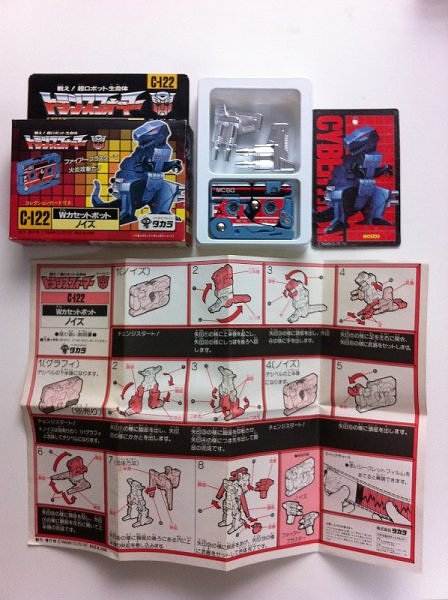 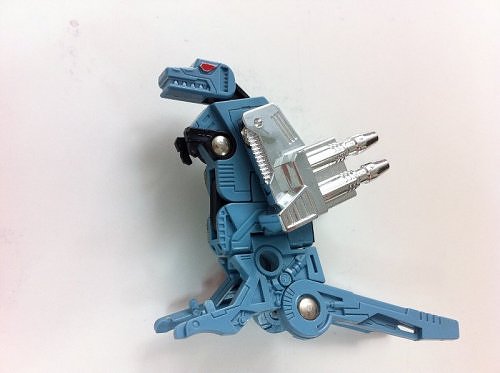 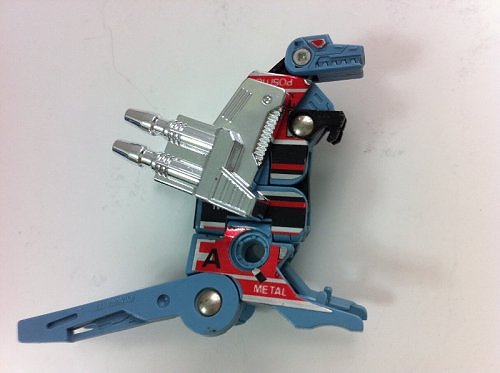 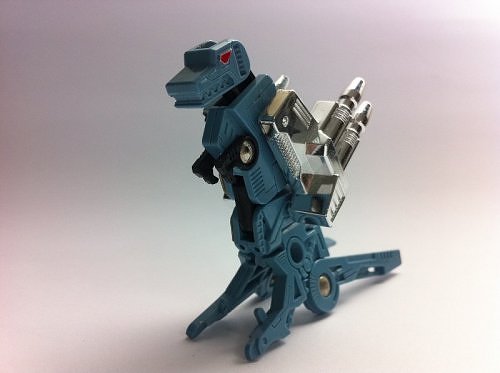 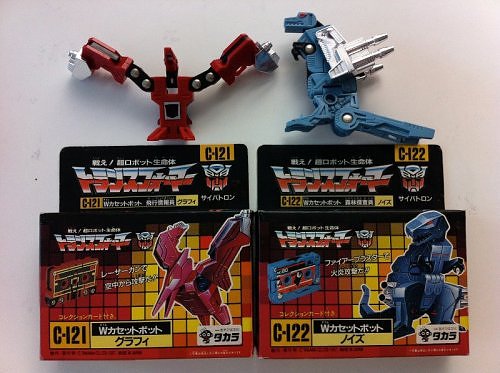 According to TF Wiki, Noizu is 'vanishingly rare'.

I know, it took me ages to acquire it. Here is the quote from TF Wiki: "As one of the vanishingly few toys unique to the Headmasters toy line and something of a tail-ender within the line, Noizu and the other three "dino-cassettes" command ridiculous sums on the secondary market. Their actual rarity is questionable, though; similar "exclusive holy grails" Stepper, Artfire, Twincast and Soundblaster were uncommon, but not vanishingly rare, yet still commanded top dollar due to overseas perception (until they got reissued, at any rate). As there appear to be no plans to reproduce these cassettes, their high-price status is unlikely to change."

Posted by Heroic Decepticon at 18:06