Parts and Pieces - Leozack auction and and Transformer parts

Been watching this one for a couple of days now, just to out of curiosity to find out how much a MIB C329 Leozack costs.

I was curious because it is in quite a similar condition with my individual boxed Leozack, which was featured here. The only difference being that mine still has its sticker sheet with its stickers unapplied.

I think I paid more for my complete Liokaiser set in individual boxes (if the cost I paid for the set is divided by 6 that is). However, the downside of buying individual boxes piecemeal is that shipping does chalk up to quite an amount and also that it would take a lot of time (not to mention effort) of continually monitor eBay for the right auctions to turn up. And when the right auctions do turn up, to start praying that the price turns out right as well.

Personally, I'm more someone who buys figures that are complete. I simply am not able to afford to buy something incomplete (or not as a set) and then spend copious amounts time trying to hunt down parts for the figure/s.

With that said, I find myself sometimes guilty of 'buying' incomplete figures and then waiting a really long time before getting off my a$$ to buy the parts that complete them.

In 2004, I acquired very near C10 minty Protectorbots and Aerialbots as part of a huge lot of Transformers I bought here but never go around to completing them by buying some of their missing weapons. Missing are: Blades' small white gun, Air Raid gun, Skydive gun, Slingshot gun and Fireflight gun.

In September 2007, I acquired all five Combaticons, with cardbacks in bubbles and in box, but somewhat incomplete. I just wanted what is I think my third set of Combaticons in cardbacks. While this is a sweet lot, I was missing Swindle's small black gun (Swindle MOC pic) and all of Vortex's weapons (Vortex MOC pic).

I'm quite happy to say that after more than 5 years for some and 1.5 years for others, I've in September 2009, acquired the missing parts for all of the above. 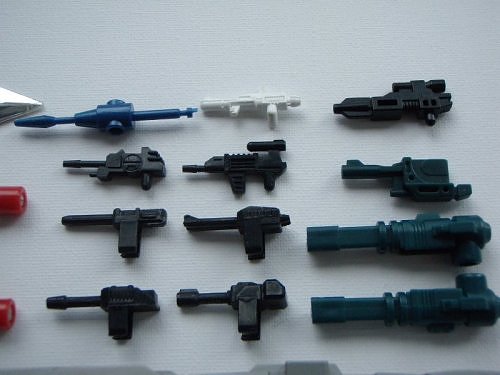 Guns for Swindle, Vortex, Air Raid, Skydive, Fireflight, Slingshot and the elusive Blades gun show above. I bought these for about $10 each from an Australian eBay seller with very good service and lightning fast shipping. This is the seller "ezystyles" eBay feedback page with links to his eBay Store and also his auctions in case anyone is looking for parts and good service to get them to you fast. 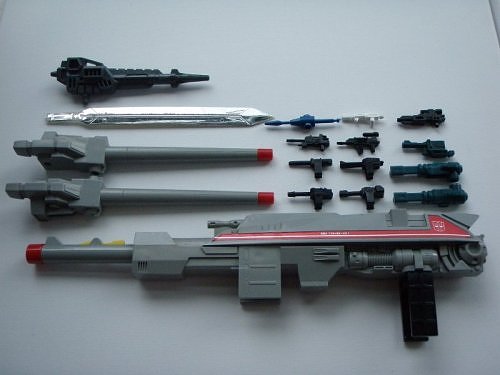 2 shoulder cannons and large cannon for Victory Leo and the ever elusive Star Saber blade shown above. I bought the Victory Leo and Star Saber parts from an eBay seller from Japan and for quite bizarre reasons, he ended shipping them to my Singapore address. Since I was no longer staying there, we had to wait for the package to be returned to Japan and then he had to ship them out to me in Australia again. All in all, it took almost 5 weeks since I paid to receive the items... and they were also pricey, although not unexpectedly.

I'm happy that my MIB Victory Leo is now complete and so is my loose Victory Saber set!

Now that I have all the weapons for the Combaticons, I'm toying with the idea of resealing all of them back into their cardbacks... a thought and a post for another day perhaps?
Posted by Heroic Decepticon at 17:02