Today, this is a post of a slightly different nature - it is not a post about my toys per se, but a post about the toys of my good friend and collector from Hong Kong, KCH (those are his initials).

To me, he is some sort of super collector, with a collection spanning hundreds and hundreds of figures from many varying lines of toys which includes Japanese G1, Japanese boxed Beast Wars, Armada, CHUG, third party toys and the like.

Recently, he has jumped head first onto the G1 bandwagon, and has started amassing some really nice and juicy G1 items in minty condition and at great prices. (I can feel the death stares, but hey, I'm not entirely responsible for inspiring him to collect G1! The G1 toys, really do speak for themselves).

The focus of this post, on KCH's behalf, is none other than Deathsaurus (or Deszaras, or as Robot Heroes would have its 'Dessaras', or as the official poster from Malaysia below says... 'Death SanRas'!). For this post, I will use 'Deathsaurus' as the name. 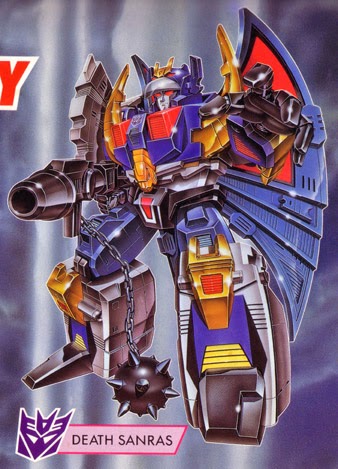 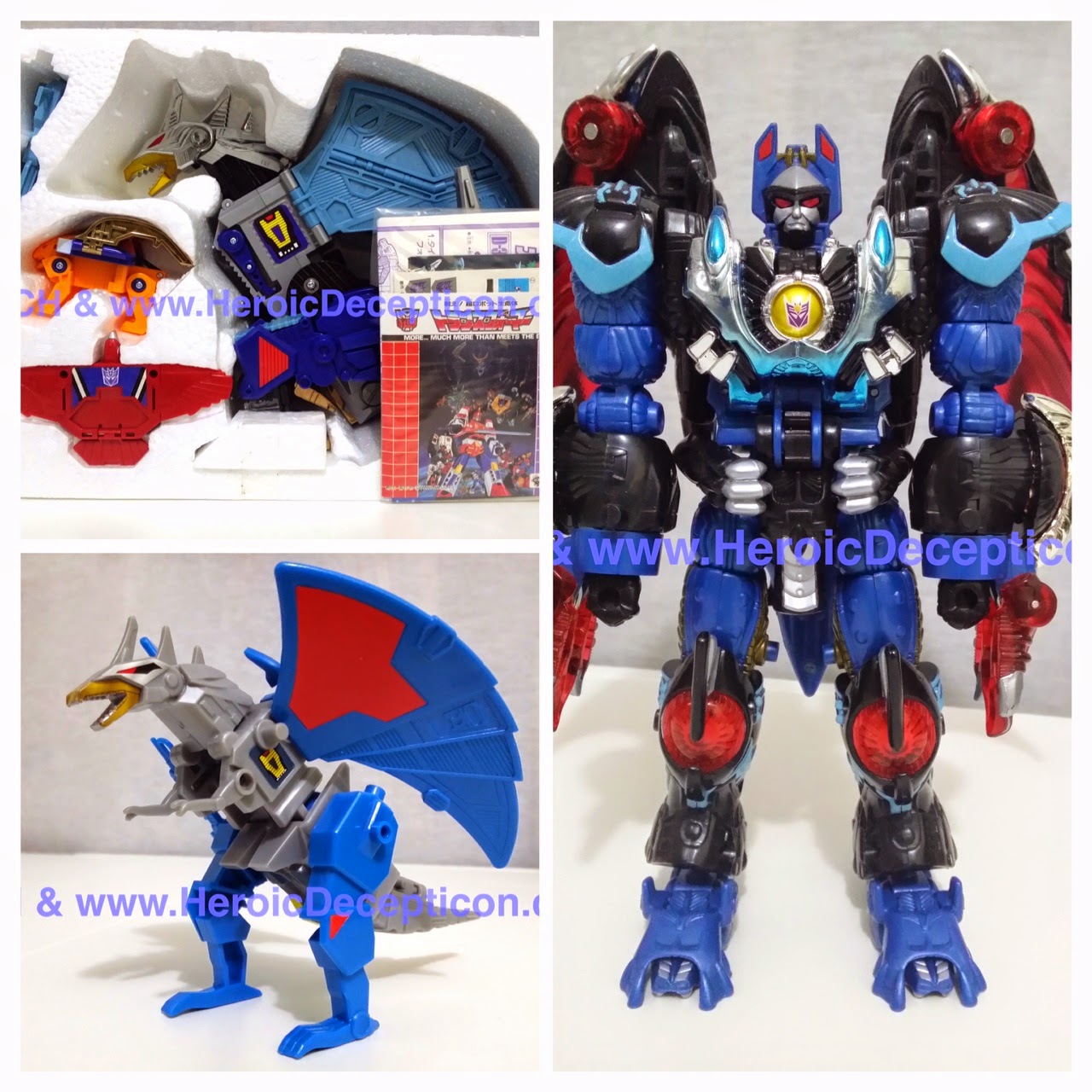 In the interest of keeping some suspense, I will start from the most recent to the vintage. Do keep in mind that all the photos of toys in this post are by KCH and not me. Oh, and the toys are also his, not mine (although I wish they were mine!).


2012 - Kabaya Deathsaurus
This was realeased circa in 2012 by Kabaya, the company that since the 80s have been releasing TFs in small model kit like form with candy and chocolate or other edibles packaged with it together. In recent years, Kabaya has again started to release these types of model kit TFs.

Deathsaurus was the #3 piece in Wave 5 of Kabaya's new releases. The other 2 robots in that wave were Optimus Prime (War for Cybertron version) and Hot Spot.

The box features the stunning box art from the vintage D-336: Deathsaurus box. 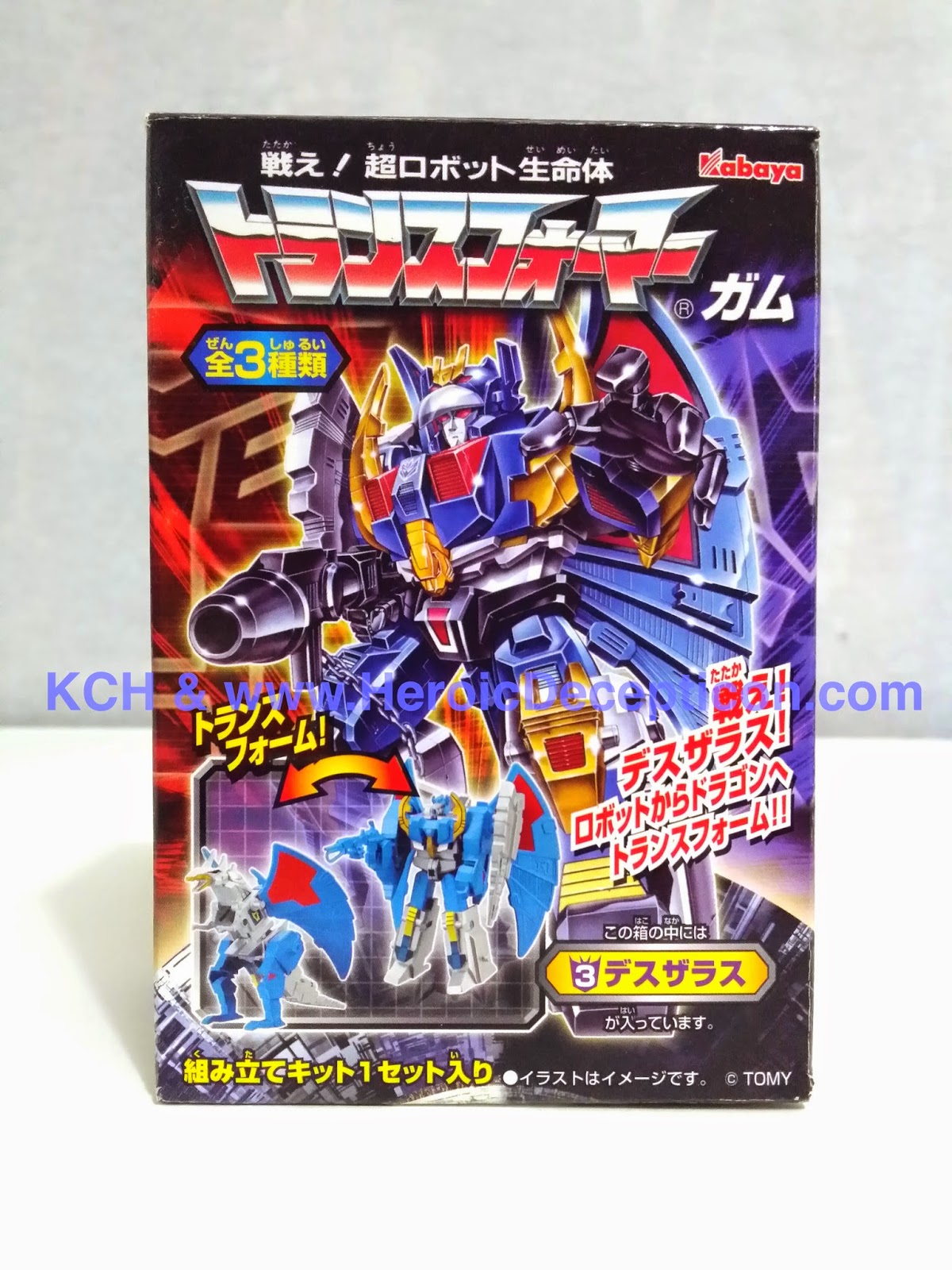 This is the side of the box which shows you the piece that you will be getting. 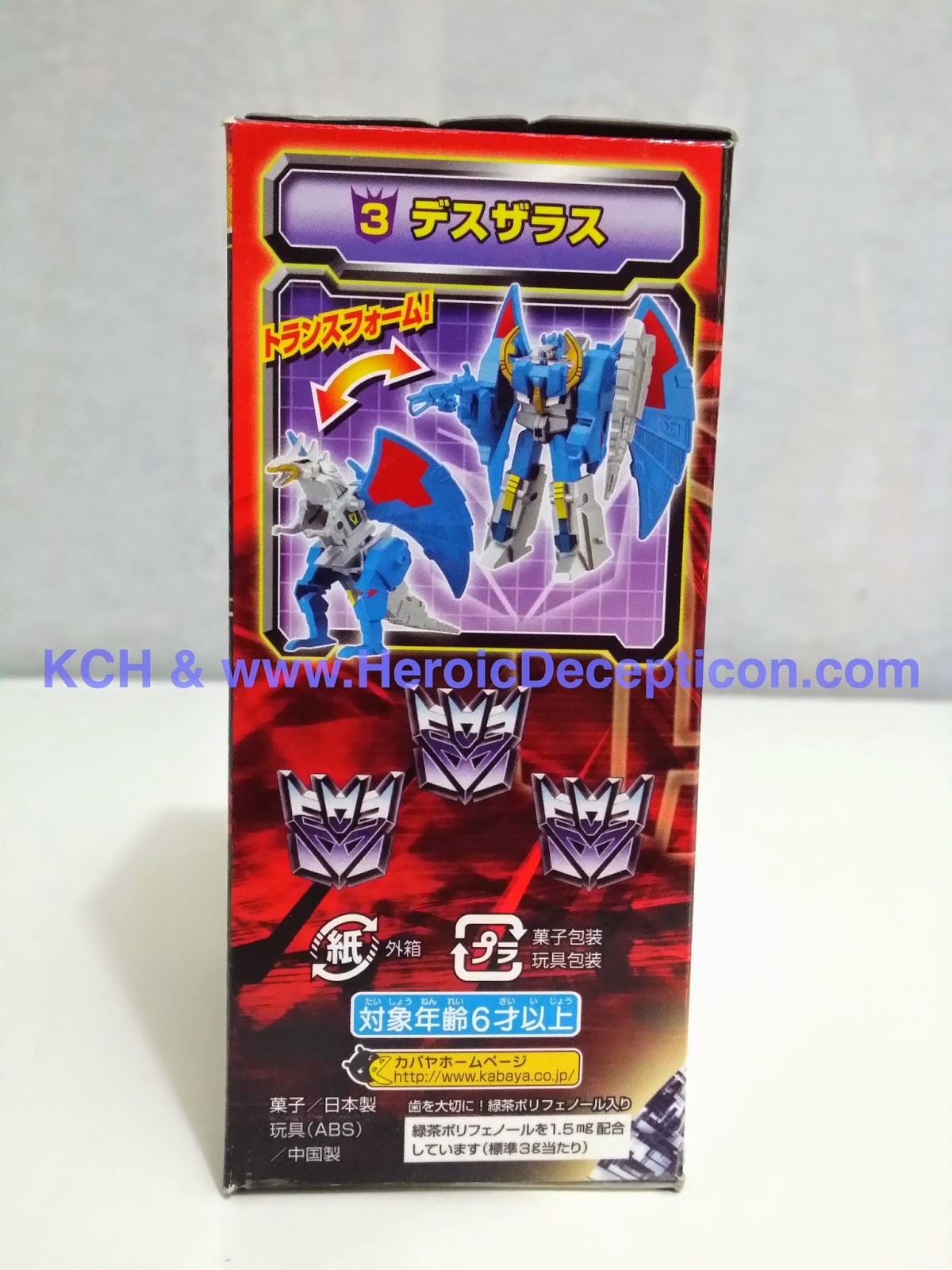 This is the back of box which shows even more about this piece. It's really impressive that, for its small size, the toy also comes with the eagle-brest and the lion-brest, both of which can be incorporated into Deathsaurus' chest! 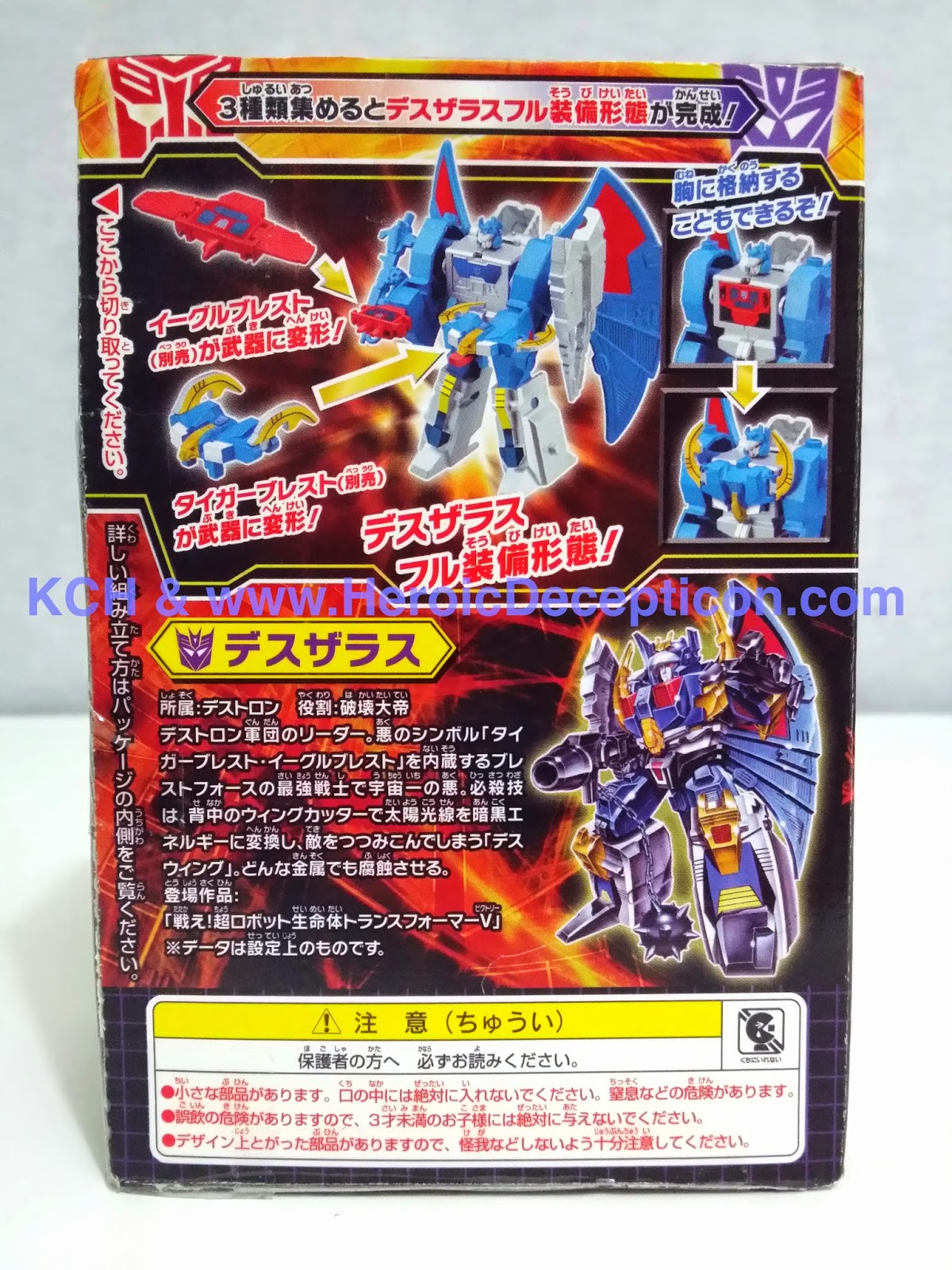 Top of the box, again, showing the completed model kit. 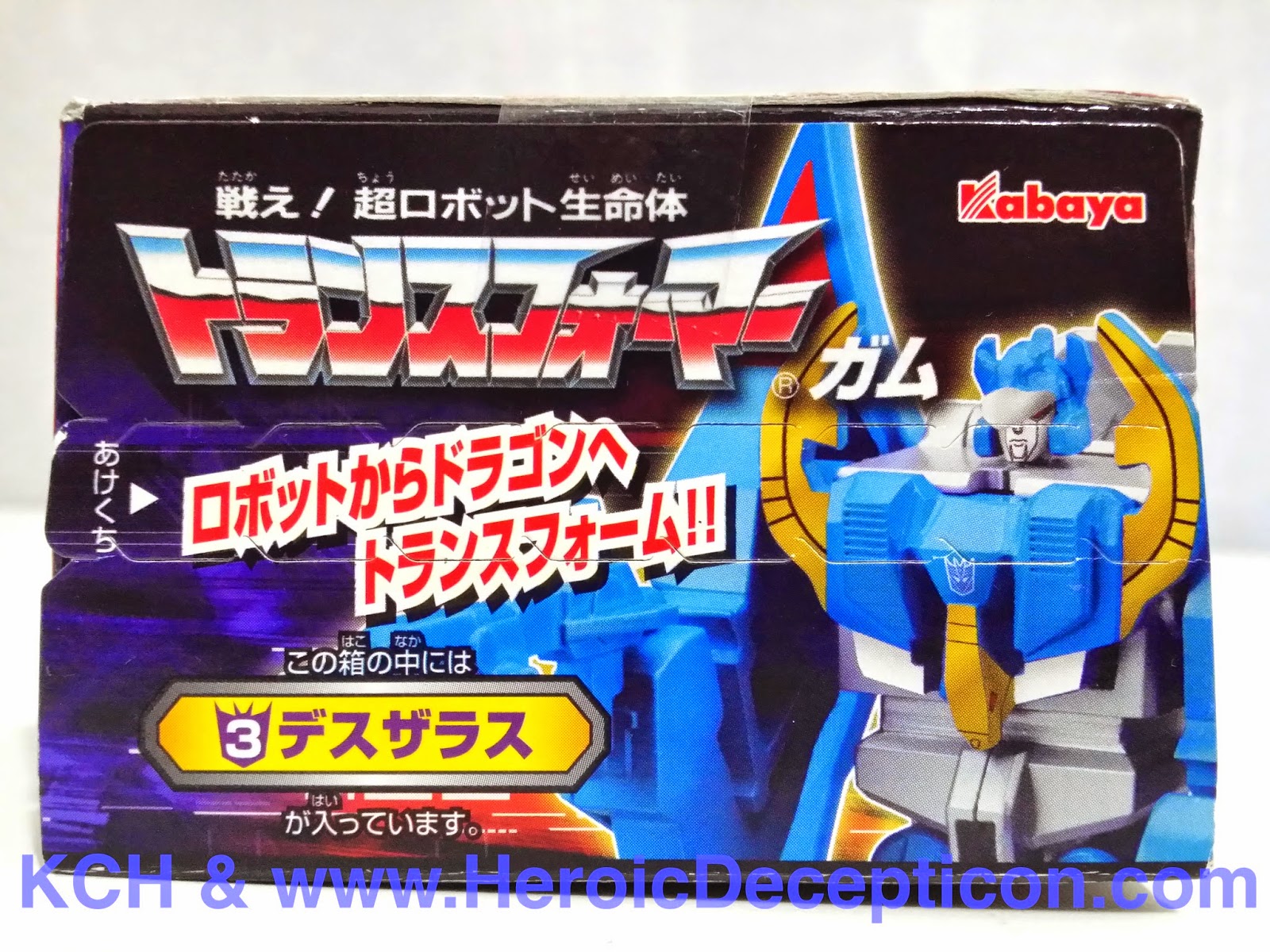 Now, here it is, the completed Kabaya Deathsaurus model kit. It does look very representative of its G1 toy. The plastic pieces come in colours that very closely match what their final colours should be, so very little to no painting is required if you are not too fussy about it. 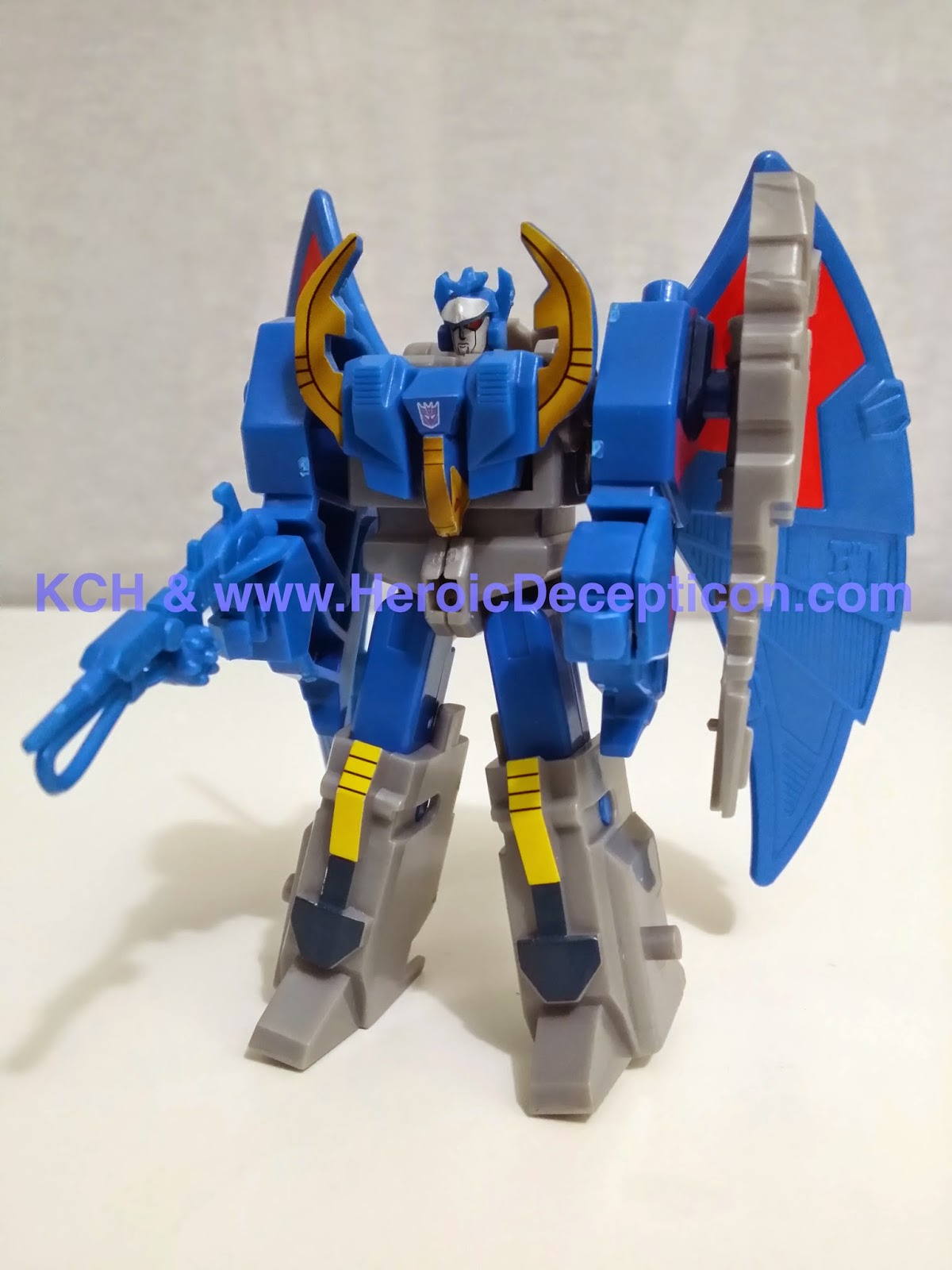 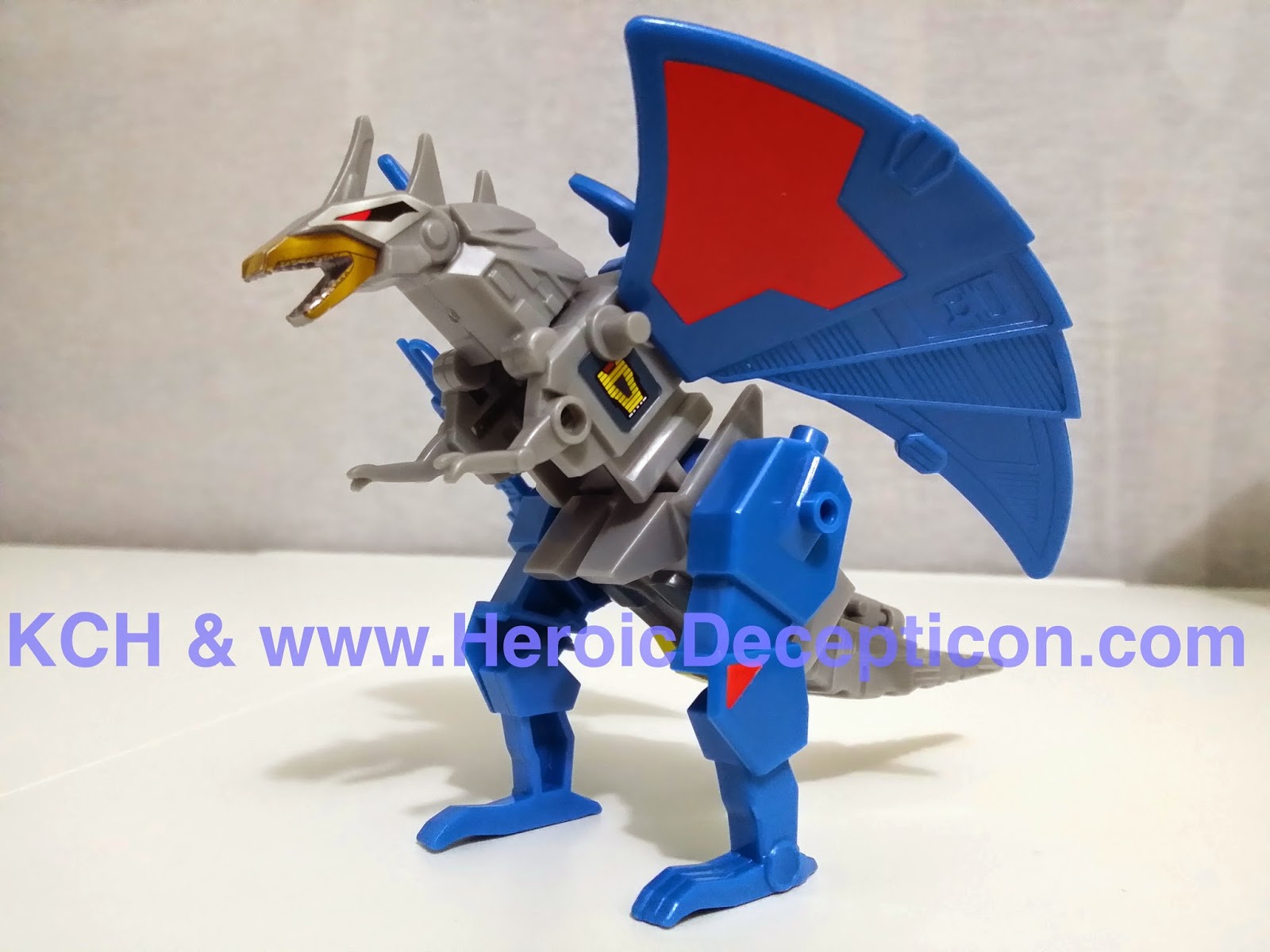 As with most BotCon releases, the boxset features a stunning painted battle scene. 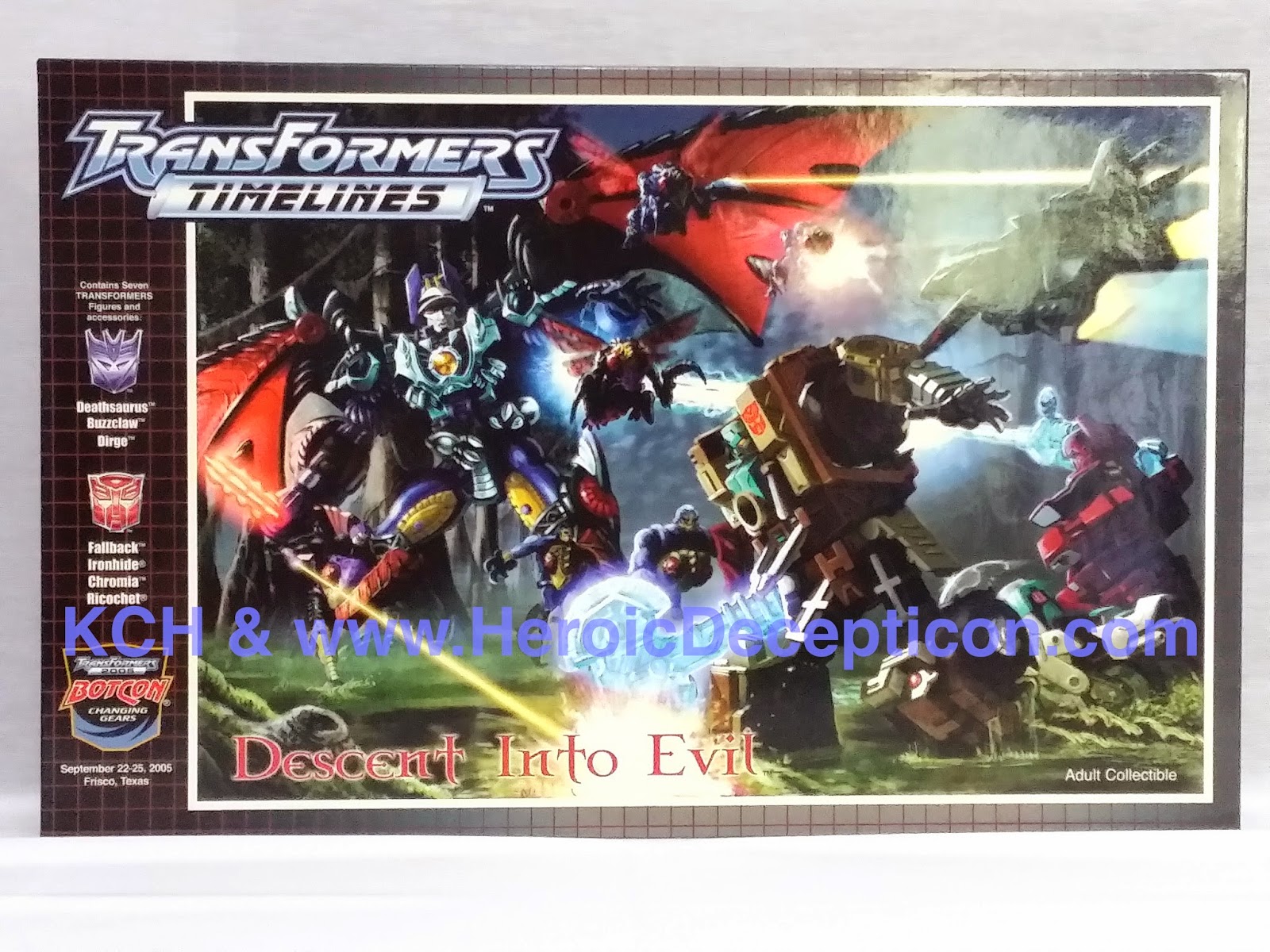 Deathsaurus was re-tooled and recoloured from the Robots In Disguise Megatron / Galvatron toy and given a new head-sculpt that matches his look in the Transformers Victory Anime. 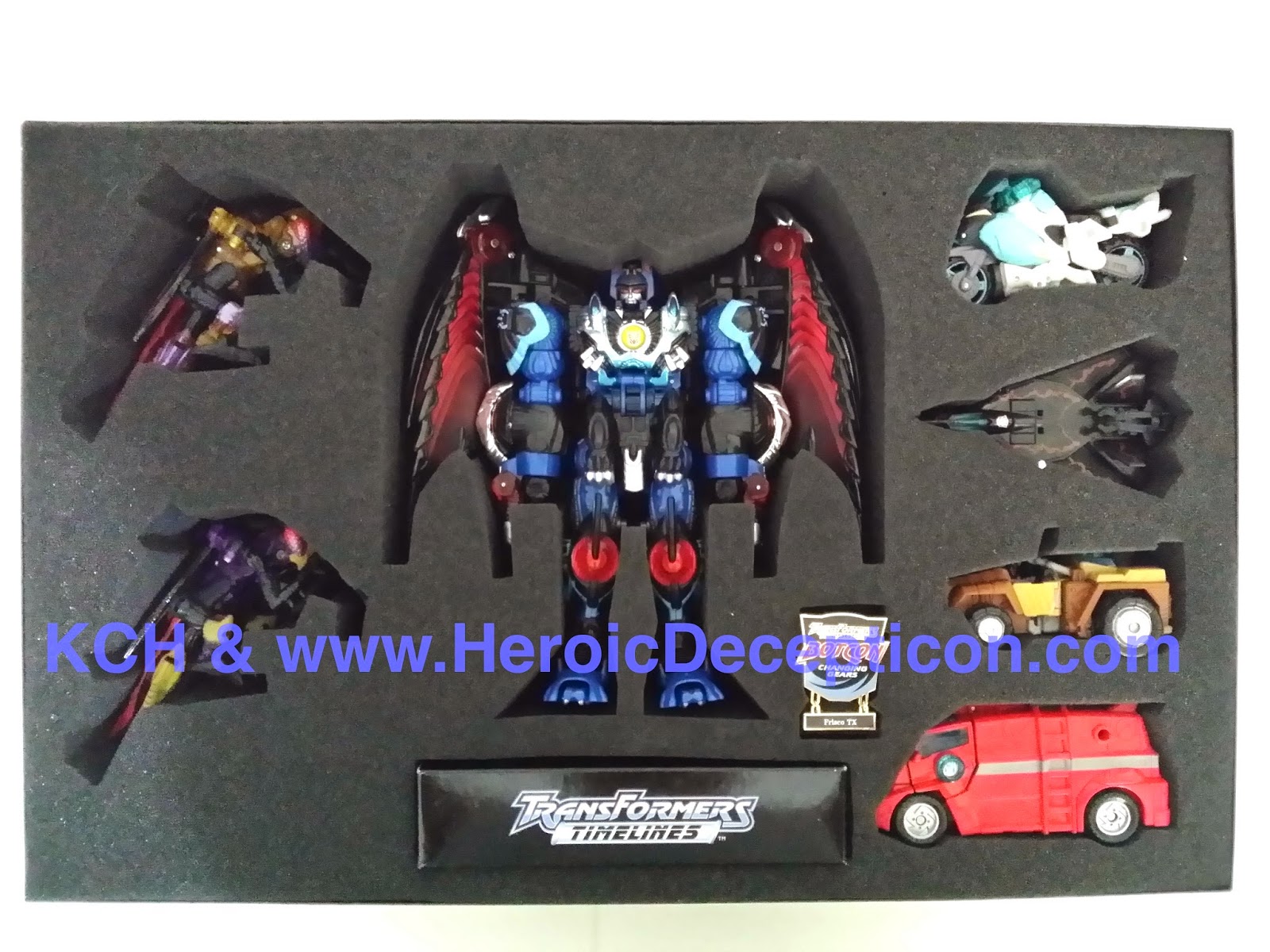 This is the side of the box with various BotCon details 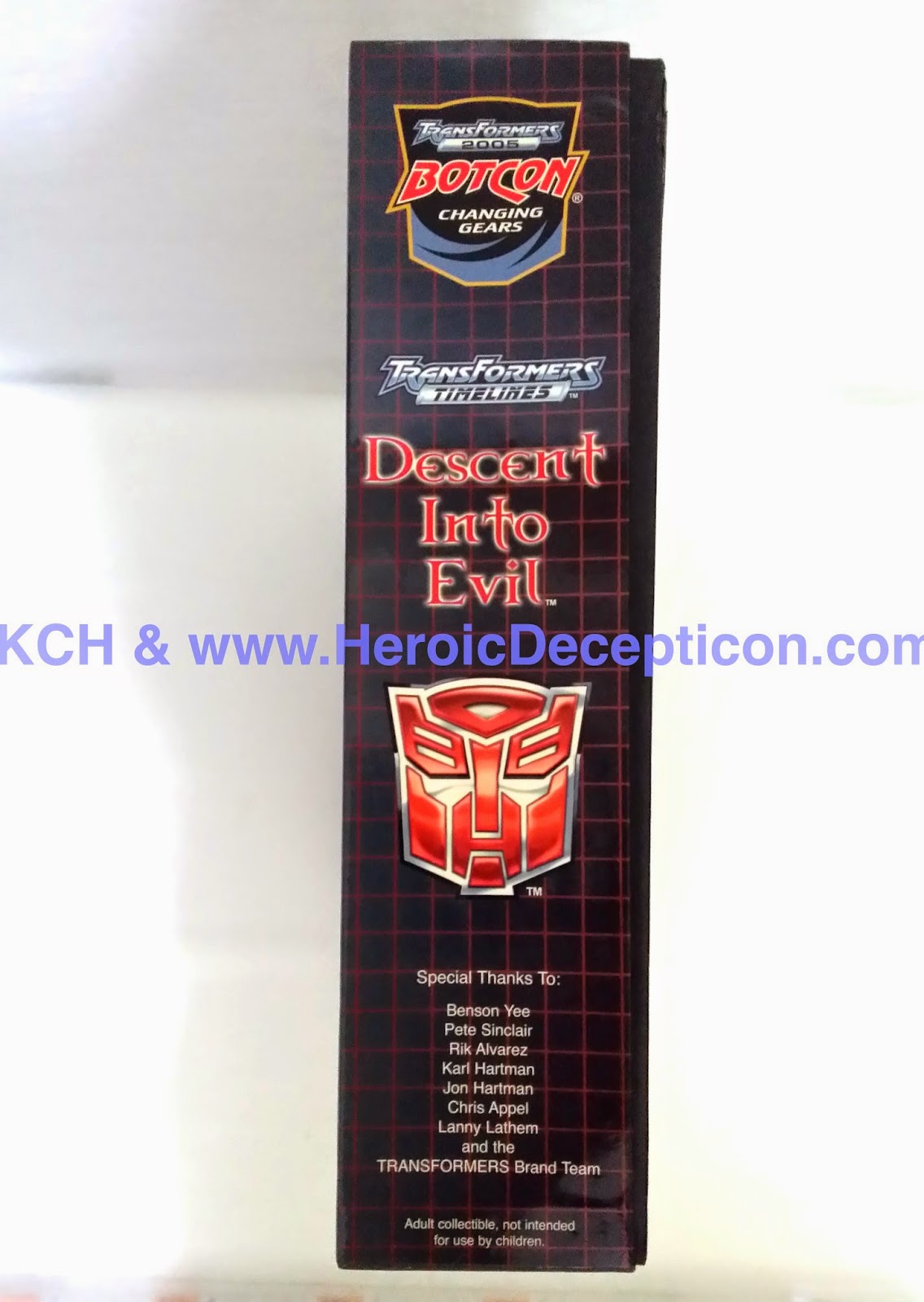 Descent into Evil Deathsaurus. i have to say that the head-sculpt looks pretty good and quite a close match to his look in the anime - see comparison below. Overall, I think this re-tooled mold does work as Deathsaurus, if you imagine him to be sort of a beast-like Dragon. 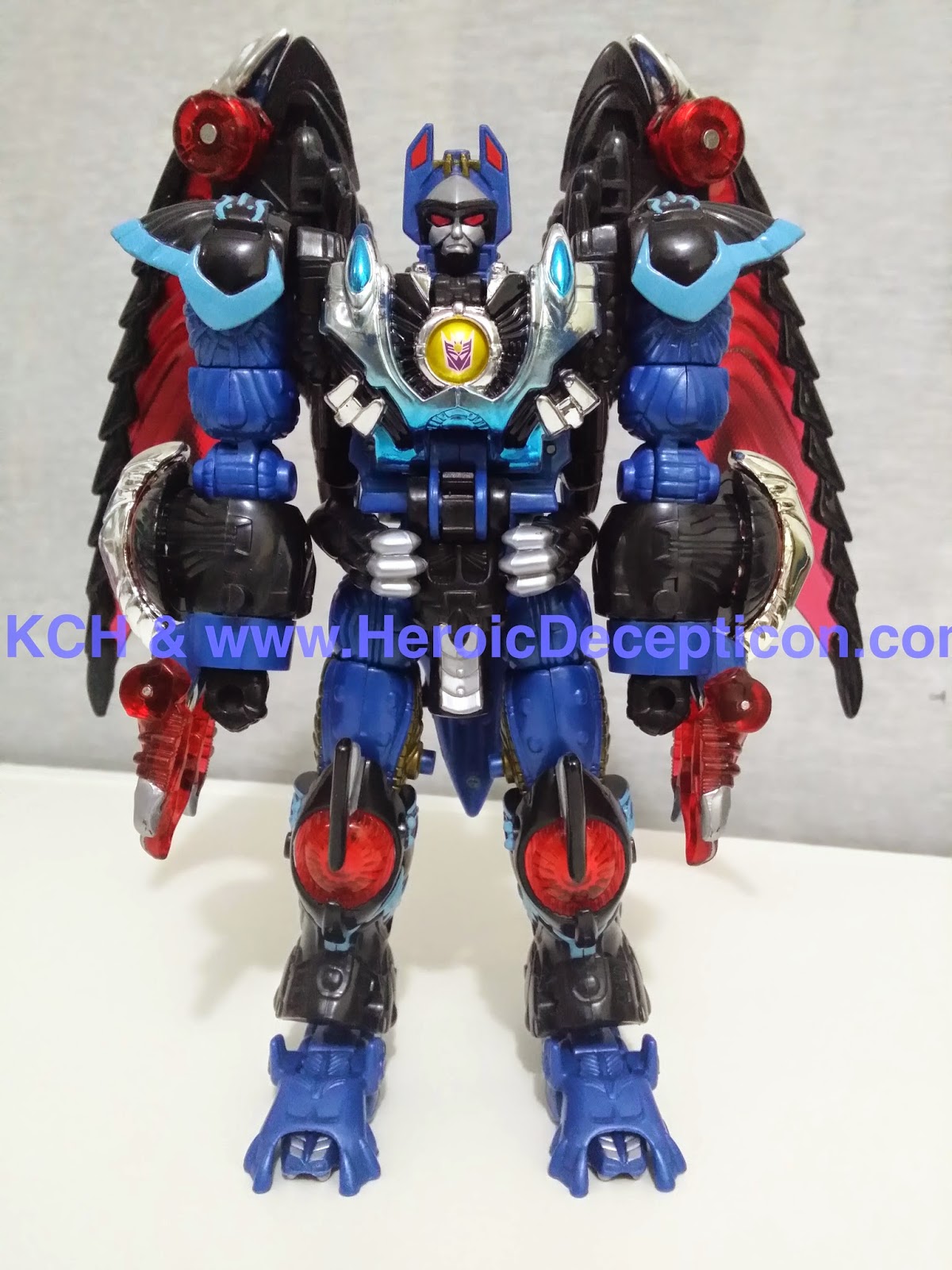 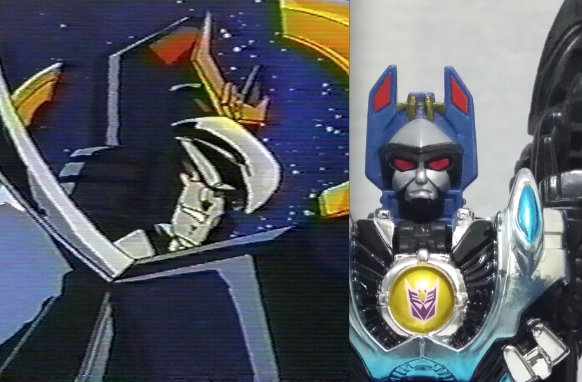 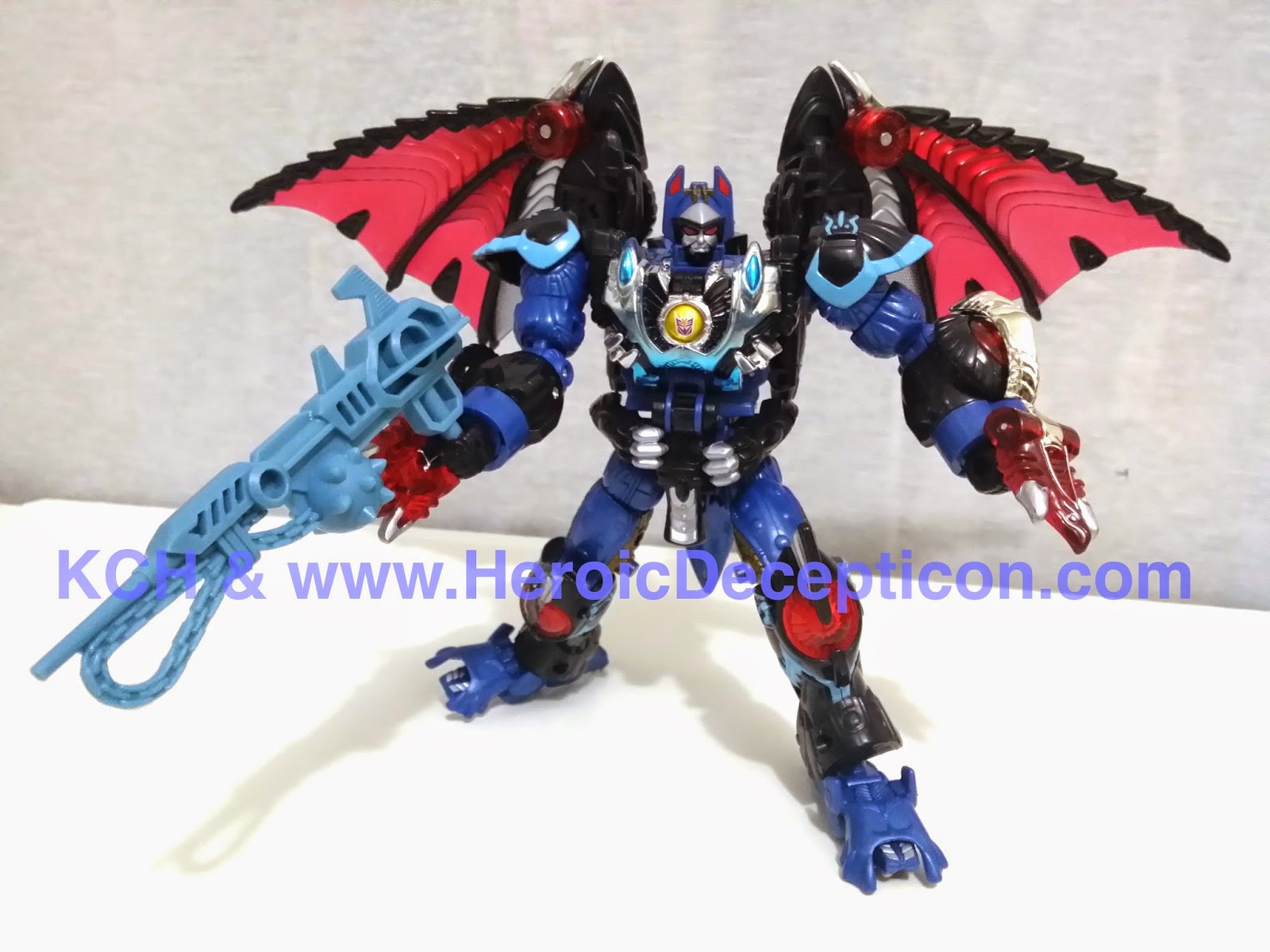 Find it KCH did though. It was fortuitous to say the least. He found it in the same shop that he bought his super mint D-311: Black Zarak from a week before! For some reason, the shop was clearing stock and so slashed the prices for it's vintage TF pieces... some by more than 45%! 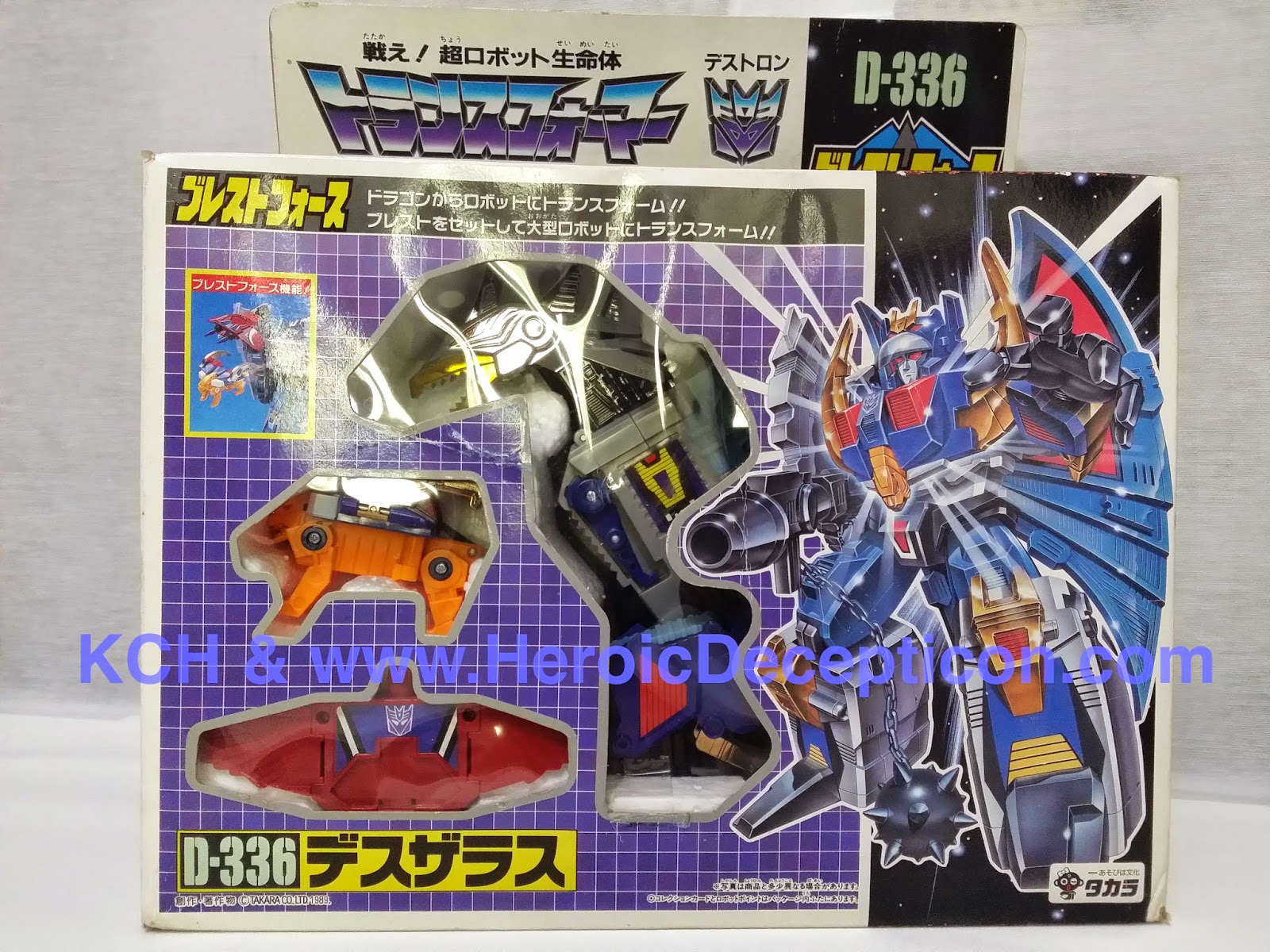 Now, here is one of the reasons why the D-336 box is often banged up and /or torn. It is such an odd shaped box. Large enough on its box front, but also very deep from the side (see below). The result is a box size that one must use 2 hands to cradle. Contrast this with an Omega Supreme box which is really large, but not very deep and one could use one hand to hold it up from the toy; or an Ultra Magnus box which is short, but quite deep but not deep enough that your fingers cannot stretch to hold it with one hand.

To me, the odd size of the D-336 box and that it cannot easily or at all be held and picked up with one hand are the main reasons why the box is often damaged, dinged, dented or even has a flap crease. 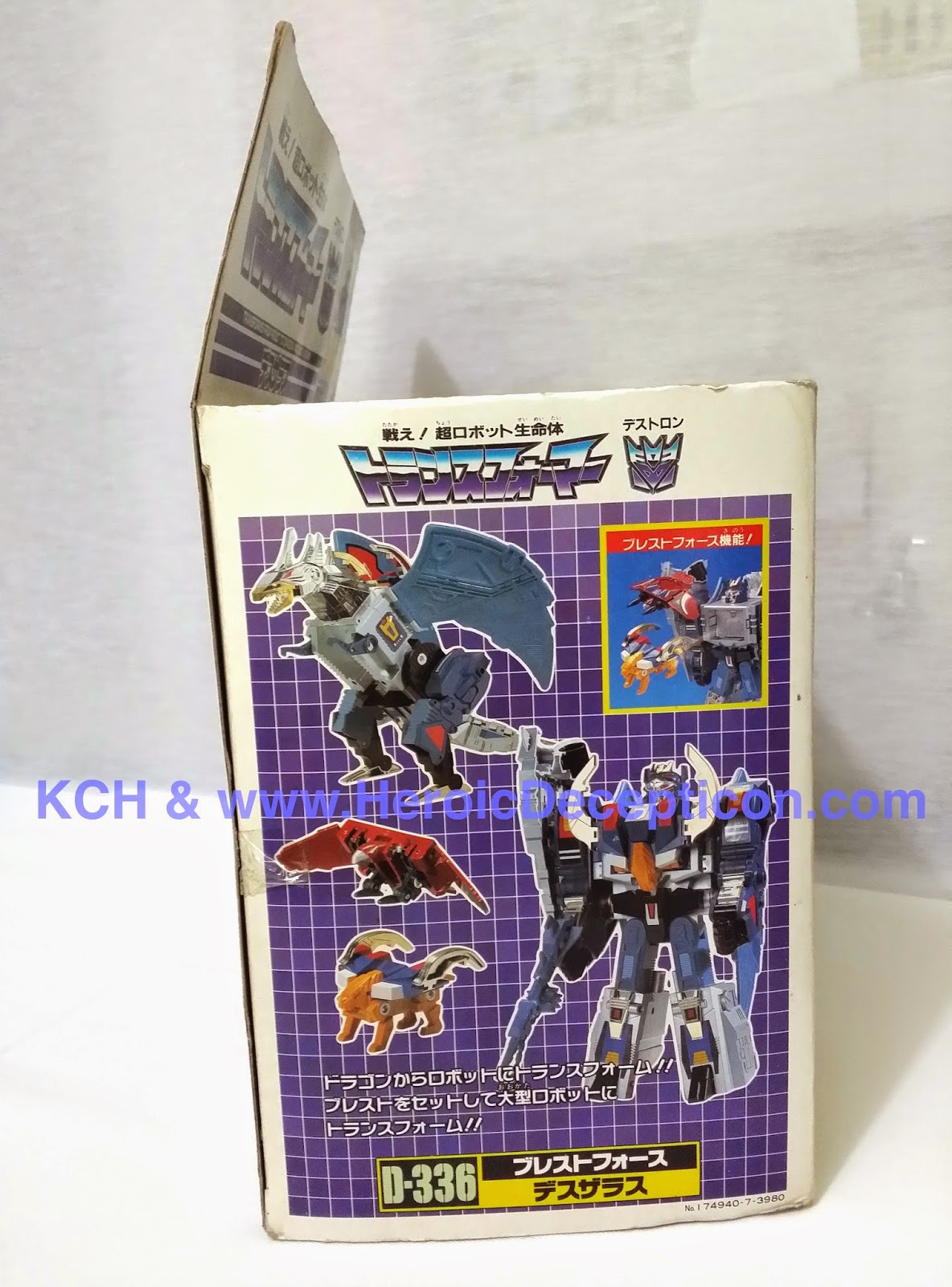 For all intents and purposes, KCH's D-336 box is very nice and relative to many other crap boxes I have seen over the years, deserves a C8.5 rating or even a C9 rating. It's only flaw is the flap crease. (I know of only one D-336 box that is without a flap crease and still in C9+ condition.... mine, ahem, heh). 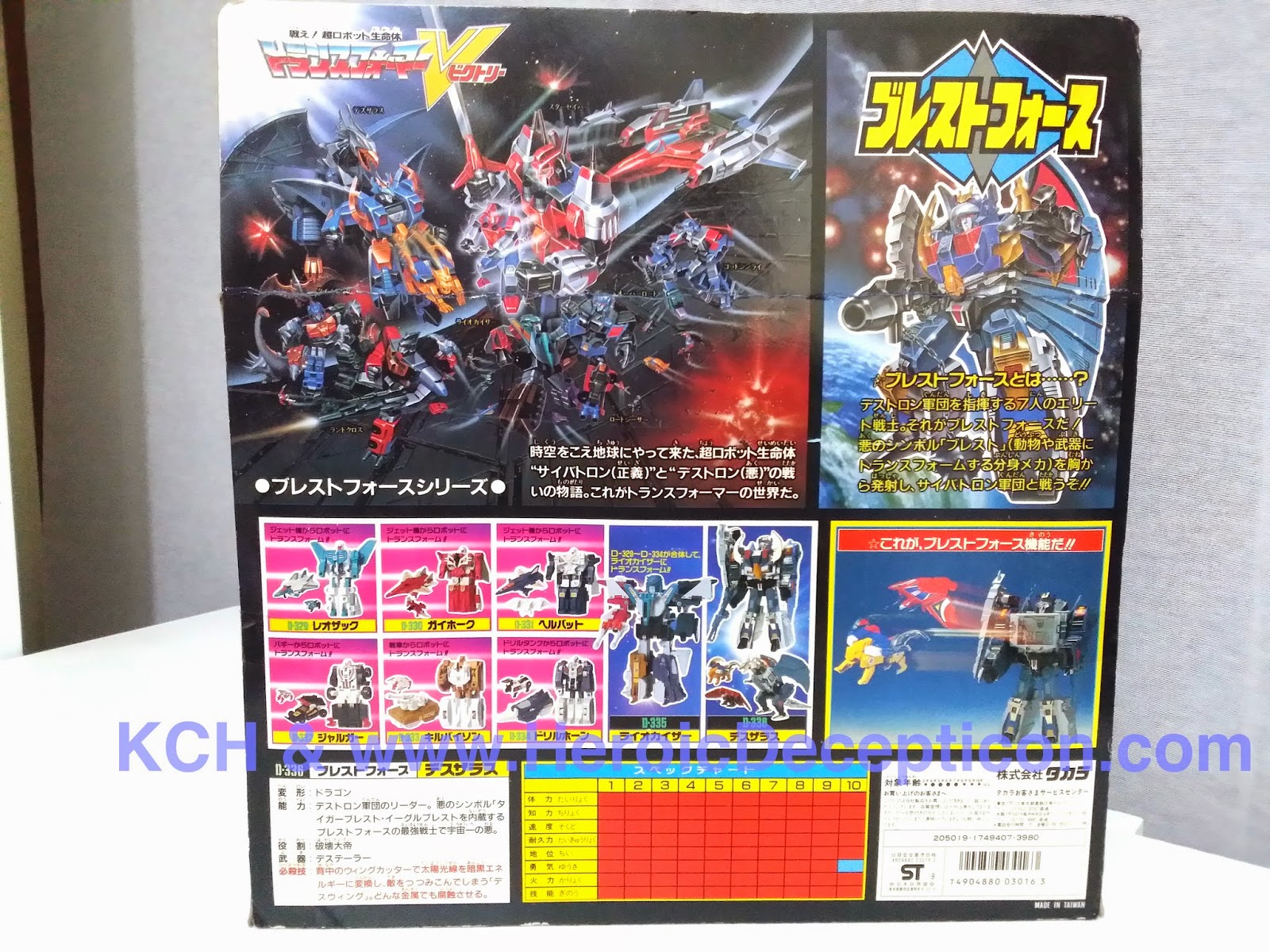 This is the bottom of the box. Look at how deep it is - enough for quite a large image of almost the entire box art to also be printed there! 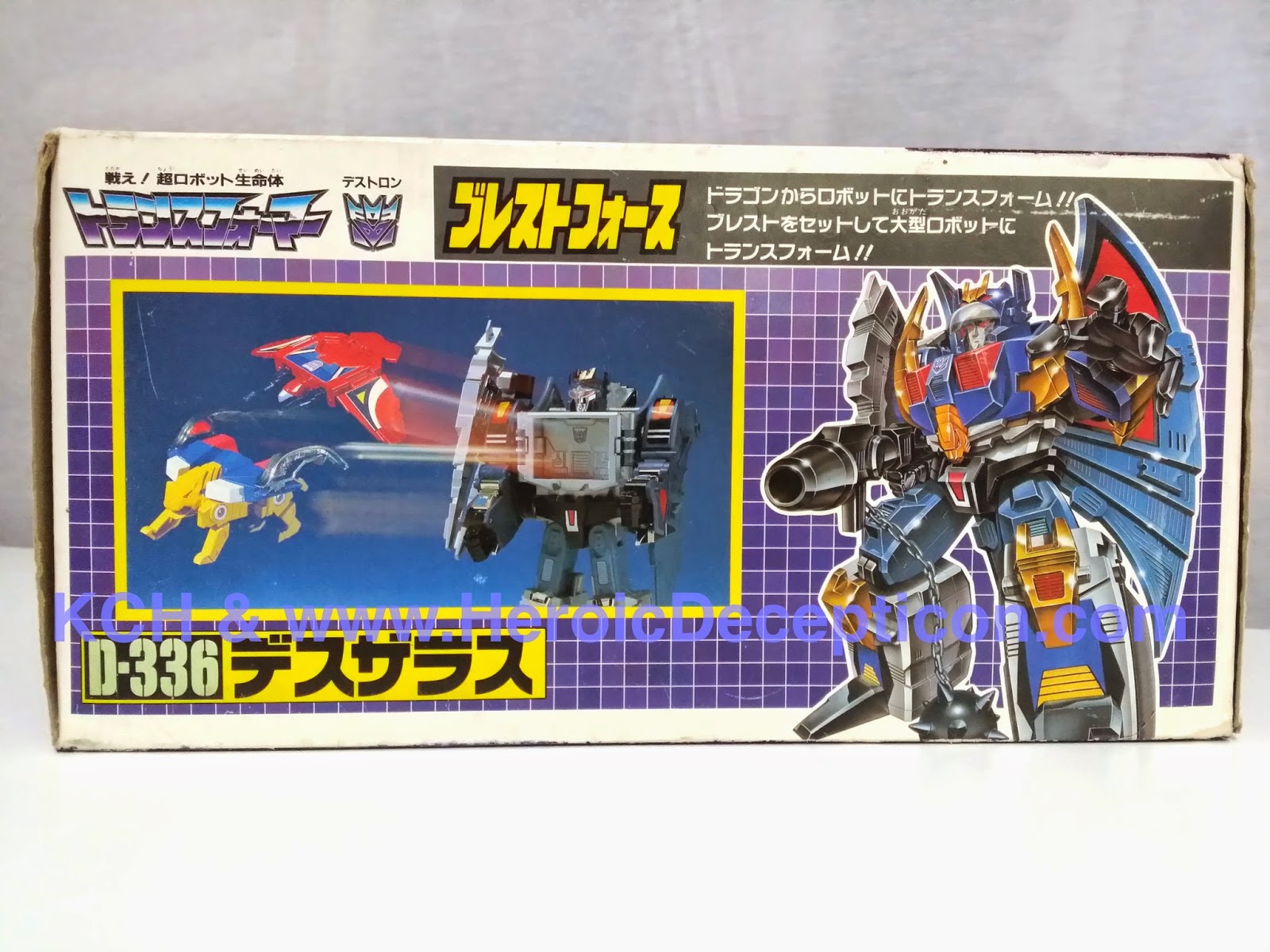 This is the top of the box. Like many vintage TFs, it depicts the toy's transformation sequence. 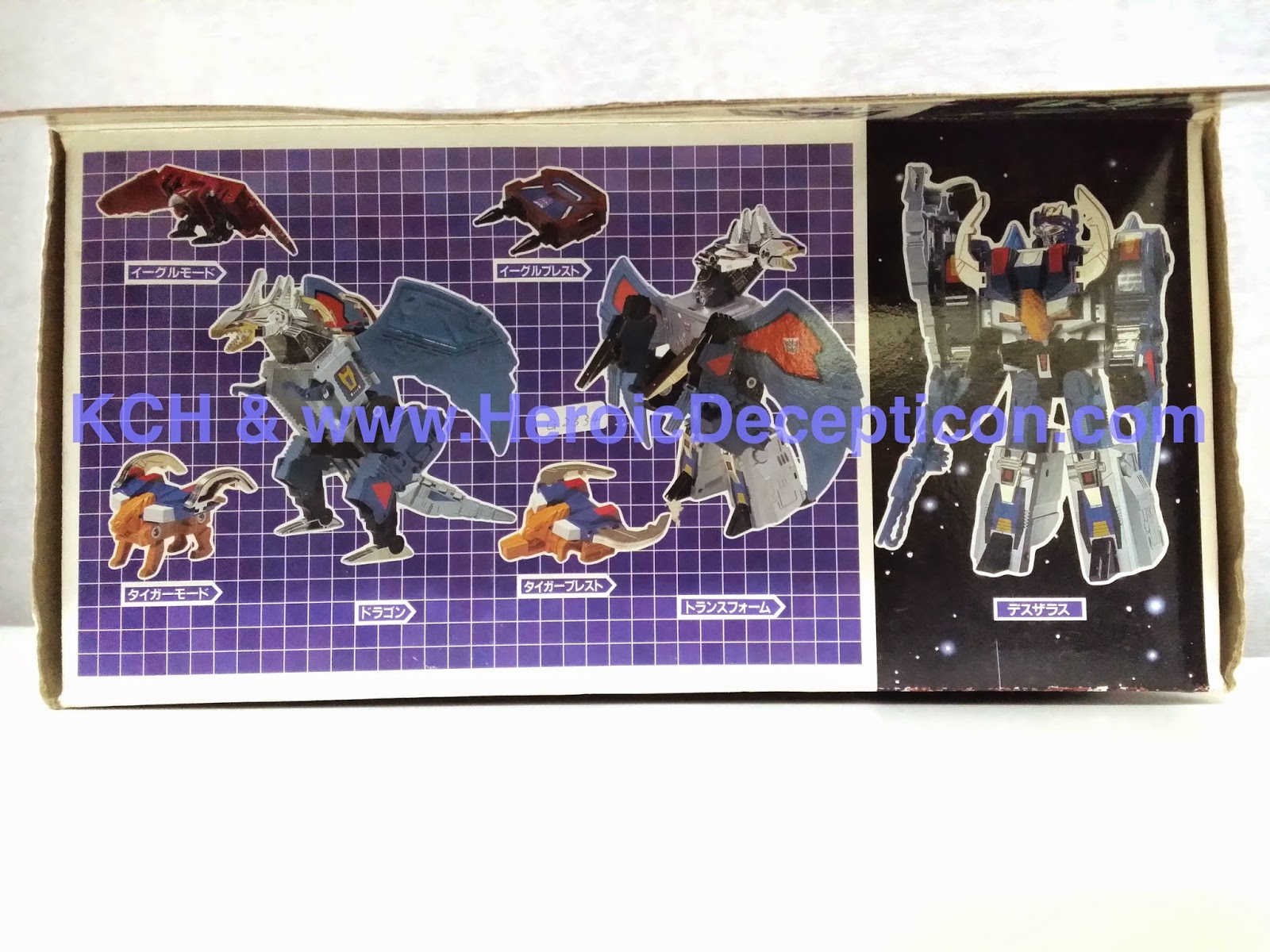 So, guess what? I did say this was MISB right?

Well, what happened was that KCH brought this home from the shop and then immediately sliced the tape and opened it!

Yum and dayum. I'm always one for opening vintage toys and enjoying them the way they were meant to (some international collectors almost got heart attacks when I told them my 'buddy opened up a vintage D-336, however). 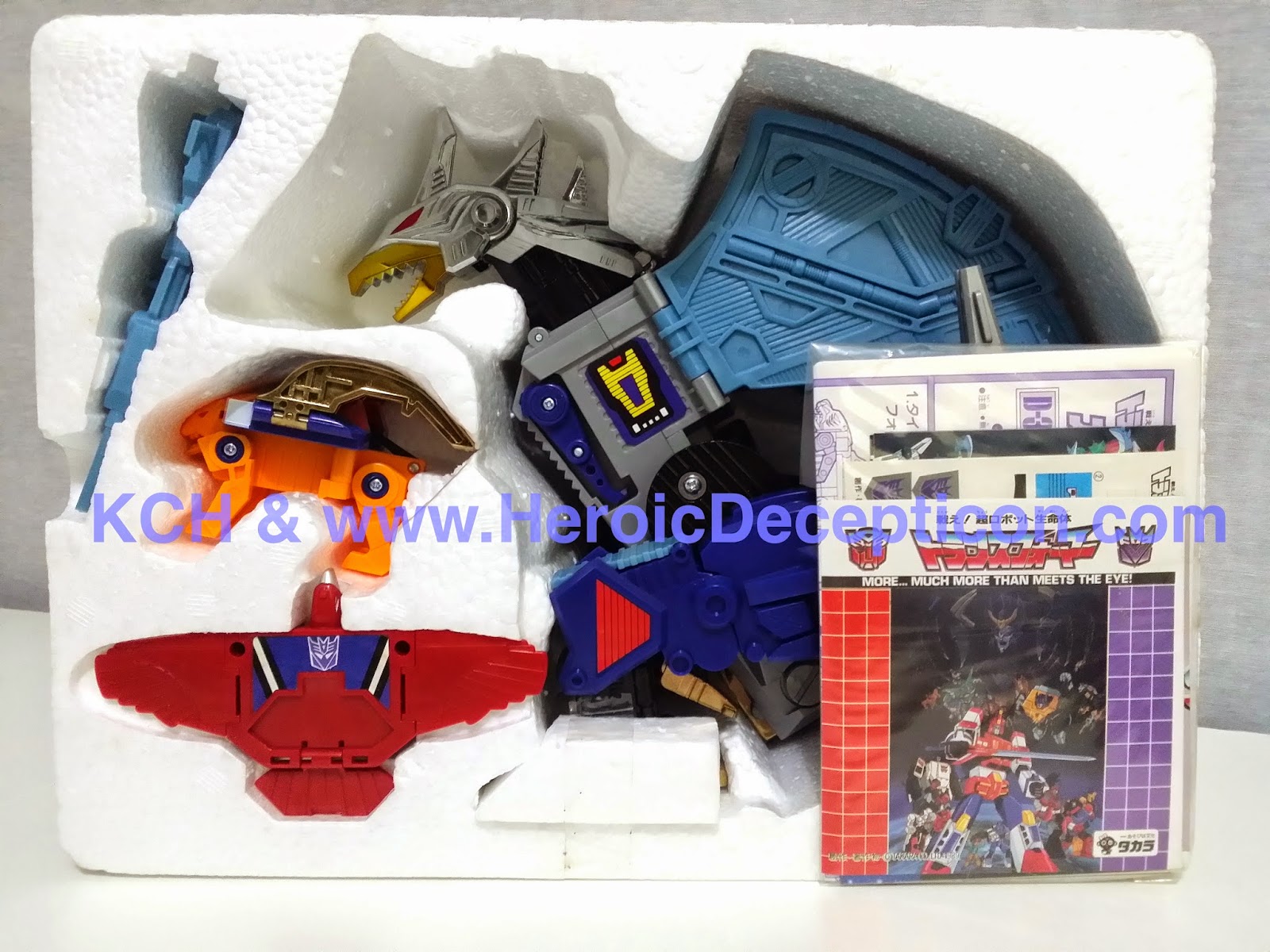 Thanks for stopping by for this edition of 'Sidetracked' and thanks to KCH for the pictures.

Posted by Heroic Decepticon at 15:35