Now that I have talked about How to Remove price tags and stickers from Transformer boxes and Transformers, it is time to take the next step. Taking the Transformer out of its packaging.

There is an art to opening G1 Transformers.

I said this in the Origin Story, Chapter 1: Fantasies and Inflections. I wish to talk about it now. And just in time for Christmas present(s) opening too.

First off, why should there be any art to opening G1 Transformers?

Good question. Why? They are just toys after all and what's to know about ripping them from their packing, whether its one way or another?

Arguably, they are more than 'just toys' to a very large number people out there. But that is an argument for another day and place. There should be an art to opening G1 Transformers, especially US boxed or US carded G1 Transformers because opening them the 'right way' will preserve their displayability and collectibility and make them more than just average run of the mill Mint-in-Box ("MIB") or Mint-on-Card ("MOSC") pieces.

For MIB and non-Mint-in-Sealed-Box ("MISB") collectors out there, displayability is perhaps the most important and compelling reason for opening G1 Transformers the 'right way'.

Isn't it too late in the day for such a post? G1 Transformers would have been ripped out of their bubbles approximately 25 years ago. This post is 25 years too late to do any good.

Admittedly, it is too late in the day to help anyone in terms of opening G1 Transformers, but the principles below are equally applicable to opening boxed toys that are sealed in a plastic bubble (or plastic 'blister' or plastic insert).

The principles below may also be useful to people who are opening MISB G1 Transformers today. For example, anyone thinking of opening their early '90s Chinese reissue Nightbeat (lots floating around eBay lately because a large stash of them was apparently found in some Chinese warehouse), might find the principles useful.

What were the principles mentioned in the Origin Story again?

In the Origin story, I said the following:

"My brother and I were perceptive, or some can say strange, kids. We did not rip our toys right out of their packages, no. For carded Transformers: We used a pen knife to slice off the bubble to remove the toys, without ripping into the cardback at all. If we still had the backing cards we would be able to scan them in for perfect G1 box art. For boxed Transformers: We sliced the tape with a pen knife; we then made incisions on the backing card with that same pen knife and removed the toy from the back without ripping off the 'bubble'. All our Transformers can be packed back into their bubbles and displayed as MISB even after play."

I will elaborate the above paragraph below.

How to open US boxed Transformers in bubble/blister packing.

Steps:
The idea result, if you are really skilled with a pen-knife, is how Skullcruncher was removed from his bubble/blister packaging (below). But first, an example from my 1985 attempt at opening Grimlock.

MIB Grimlock with bubble insert still (rather) firmly attached to the cardback and displaying upright. 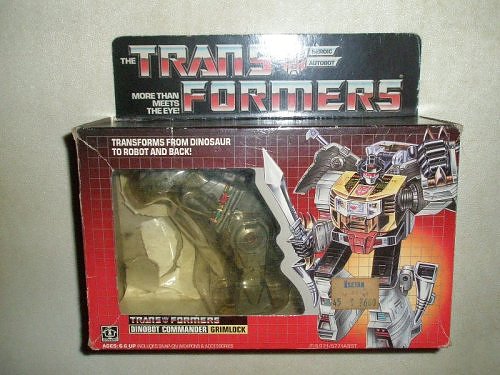 Do not rip the bubble from the front, but turn it behind and make small incisions in the cardboard. 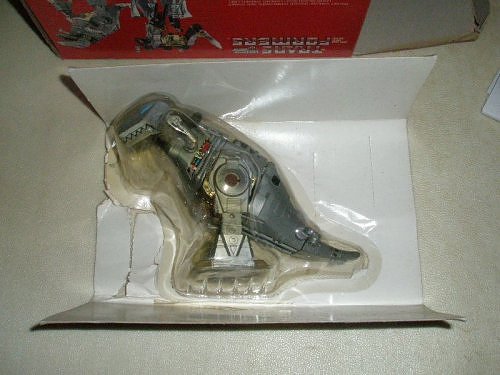 Use your nails/fingers to peel the cardboard back slowly, and if necessary small piece by small piece, but ensure that the edges of the bubble is still firmly attached to cardback. 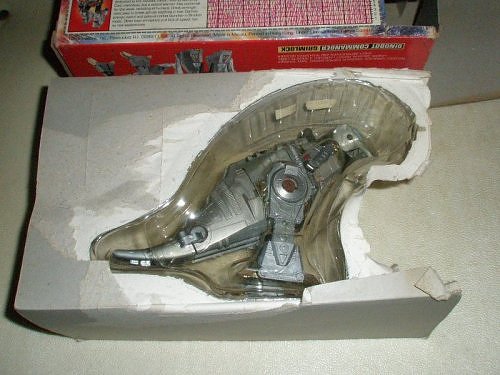 Of course in this case I didn't do it well enough and so parts of the cardback has become detached from the bubble. So, here's a better example...

EXAMPLE 2: My recently purchased Skullcruncher MIB, opened with a lot more finesse than I opened my Grimlock in 1985.
Step 1: Do not rip the bubble/insert from the cardback. 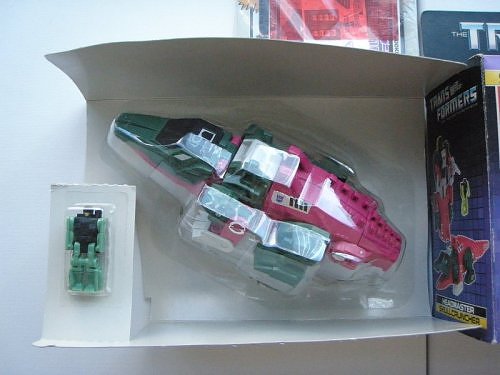 Step 2 & 3: Turn the cardboard insert around (so the the bubble/blister faces away from you); Use a sharp pen-knife to make some light and small incisions on the cardboard where the figure is. I note, small and light incisions. The incisions should not puncture the cardboard and end up damaging the figure. 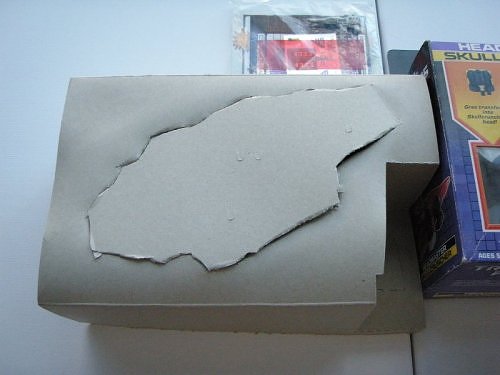 In this case, the incisions were so well done that the cardback can be opened like a flap. 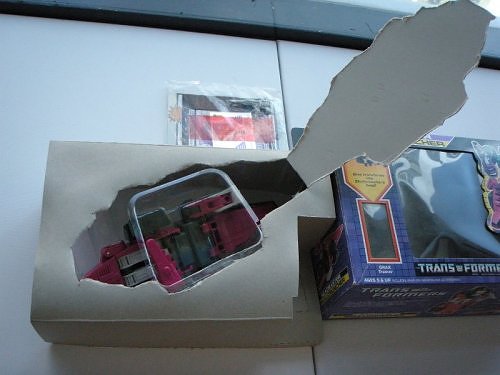 Figure ready to be removed and replaced at your leisure. 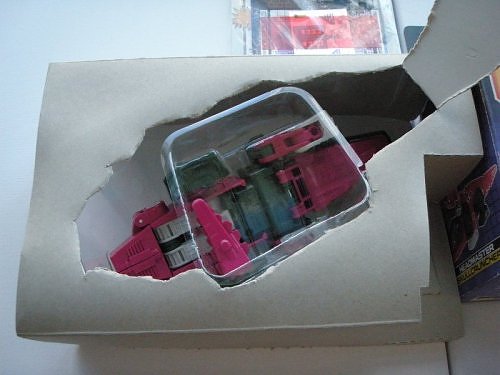 Figure may be reinstated in box and displayed as if it were never removed from its bubble/blister. 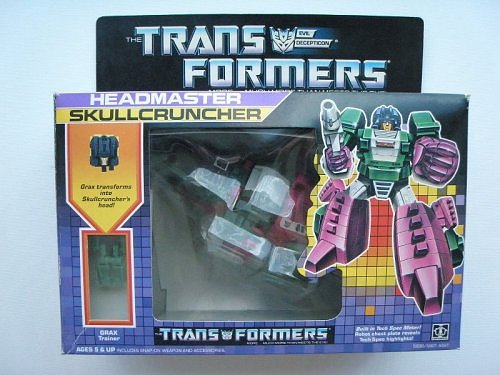 How to open US carded Transformers

For illustrative purposes, cardbacked Transformers should not be ripped open like the 4 Stunticon cardbacks below were. More than half the print on the Deadend card was ripped off together with its bubble. 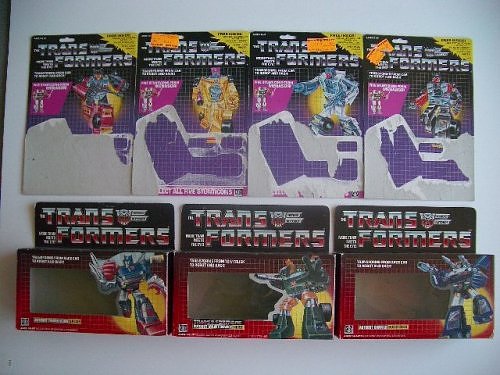 Example of Step 3 being properly followed:
Properly sliced cardbacks (with all the bubbles removed) would look like the left and right cardbacks below. There is no damage to the cardback graphics at all, but the toys, accessories and bubbles are removed. 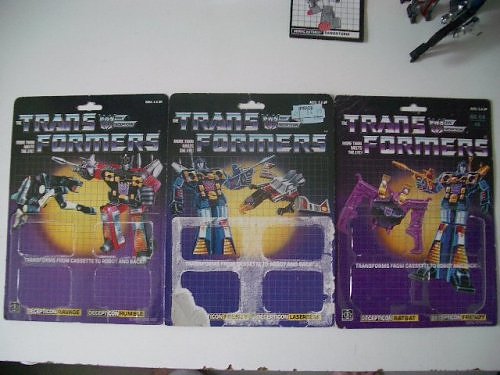 Deviation of Step 3:
Seawing and Nautilator removed from cardback but not exactly as per Step 3 and thus there is slight damage to the cardback graphics. The key difference is this - these 2 bubbles were sliced at the edge of the flat portion of the bubble, whereas in accordance with Step 3, it is recommended that the bubble be sliced at the point where the part of the bubble that pops up first contacts the cardback (see the Rumble/Ravage and Frenzy/Ratbat cardback picture above for clarification).

Brawl and Swindle removed from cardback but also not as per Step 3. 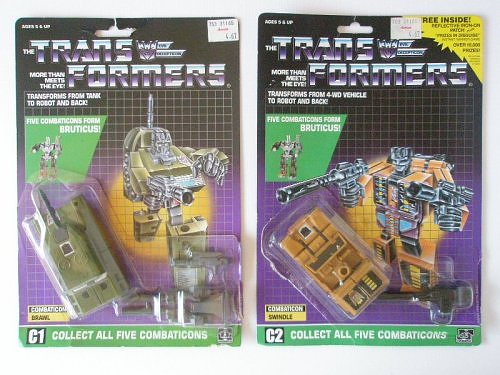 Have fun! If you have any questions, feel free to email me here.

Related Post
How to Remove price tags and stickers from Transformer boxes and Transformers
Posted by Heroic Decepticon at 17:22