I have been known to be nuts about cartoon accuracy when it comes to my Transformer collection. To this end, I am very interested in figures that are cartoon accurate, whether in terms of molding or colour scheme.

In the name of cartoon accuracy, I have insisted that:
Now, one of the things my brother and I always wanted when we were young was a cartoon accurate Slag. Of the 3 'original' Dinobots, Slag's toy was not cartoon accurate while Grimlock and Sludge's were. Thinking about it, it could well be the other way round - where Slag's cartoon colours were not toy accurate, but I digress.

This is Slag in the G1 cartoons - he has a slightly orangy body and face and white upper legs (Slag in the middle). 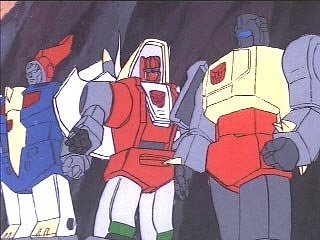 In fact, this is even how Slag looked on his G1 USA box! Red face, white upper legs. 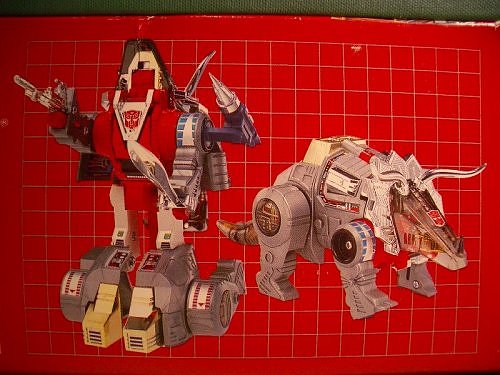 Strangely, the G1 toy of Slag is coloured neither like in the cartoon or like the pictures on the box - the G1 toy Slag has a black face and black upper legs, like this (Slag is in the middle). 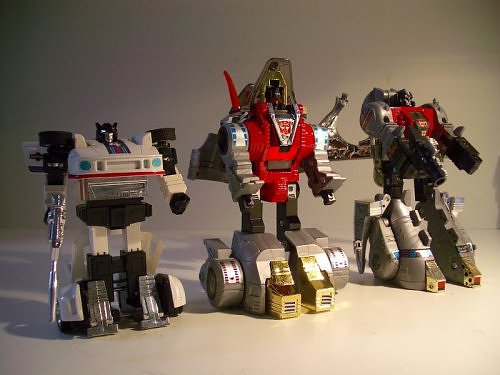 A few years back, I found out that there was a Slag variant out there. Apparently, a batch of Slags released in Canada back in the 80s were different from the more common USA (and all other parts of the world) Slags - this Canadian variant had a red face, red fists and white upper legs, in other words, its a cartoon accurate Slag!

I immediately started to look for this so-called "Canadian Slag" or "red faced Slag" and unsurprisingly, found that it was pretty rare. Since I was in Australia at the time, I didn't have many options and mostly have to scour eBay for this rare gem. In the many years, I been looking for it (I have been slack on and off), I've only come across this Canadian Slag twice.

The first was being sold on eBay by a lady seller from the US who does not know what she has, but was savvy enough to resist not selling it to me for US$150. She let the auction run the whole way and it ended at US$275, an amount too much for the then student me to afford.

The second time I saw it for sale was sometime late last year by a seller called "Diaclone-city". He was selling the diaclone Slag (blue chest) and the Canadian Slag as a lot in an auction. The toys were both incomplete and both toys were missing either 1 or both leg 'caps'. I offered to buy just the Canadian Slag from him, but he did not reply to me anymore after 1 -2 email exchanges. After many months, the auction is still online here, with the seller asking US$800 for both pieces.

If you ask me, its very difficult to justify paying such a premium for toys that are not only loose, but are incomplete and also defective in a way (parts of actual figure is missing, not just accessories).  Additionally, even the stickers are not applied in their correct positions.

The third time round, I 'saw' the rare Canadian Slag because a few collector friends very kindly informed me of it. It's very surreal, in the span of less than 24 hours, different friends located as far apart as Singapore, Australia, the UK, Canada and the US all separately emailed me that this particular TFW2005 member had a Canadian Slag for sale! Thanks guys, you know who you are! =)

I was actually away from HK and back in Singapore for CNY when the news reached me, but I had to check it out. I corresponded with the seller (desperately) over an intense 2-3 days and finally secured the Canadian Slag! Woohoo!

My Canadian Slag arrived middle of last week and it was a momentous occassion indeed. I placed him on my living room table next to Bluestreak and Jazz rightaway (blurry iPhone photo below). 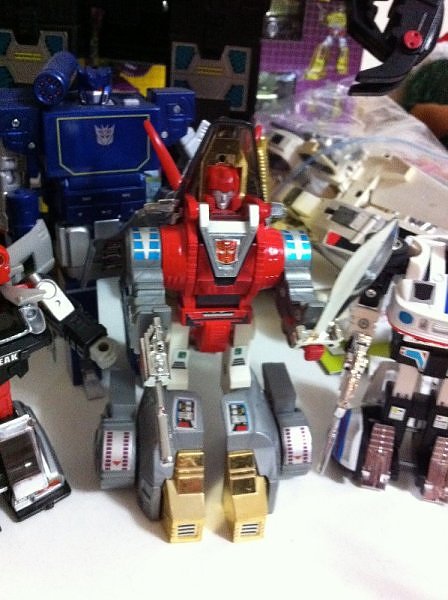 Here is another shot. 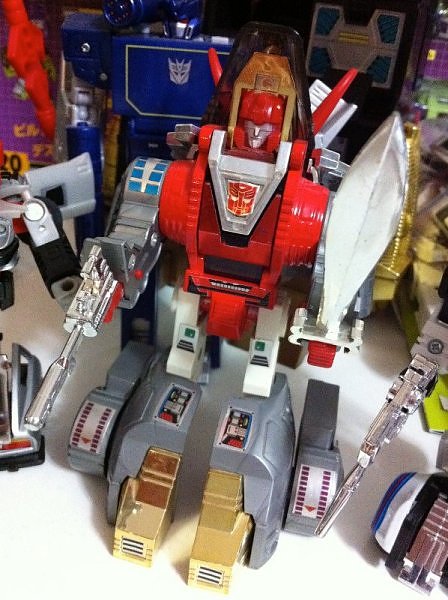 This morning, I took some proper shots of this gem. 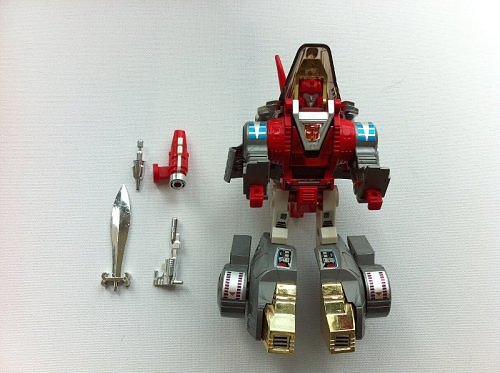 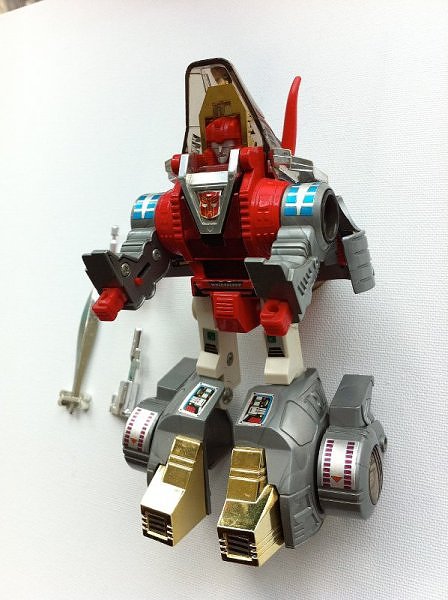 These are the weapons it came with. I've been told that it normally does not come with a red launcher and that the red launcher is a variant to the already variant-ness of the Canadian Slag, so I take it as a bonus. I think the silver chromed sword only originally came with the diaclone version of Slag, so that is another bonus. 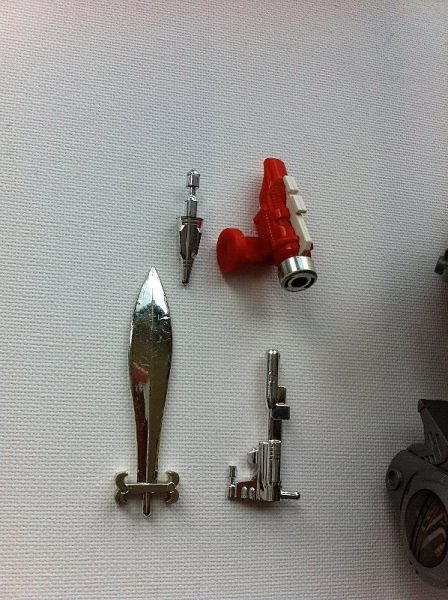 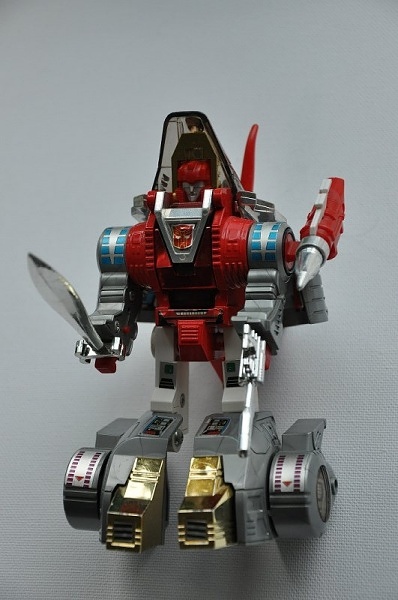 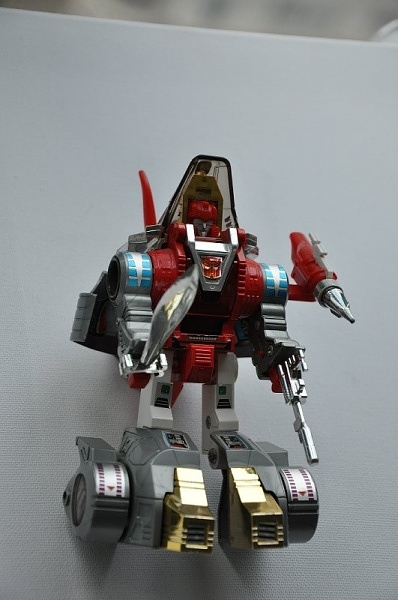 Close up of Slag 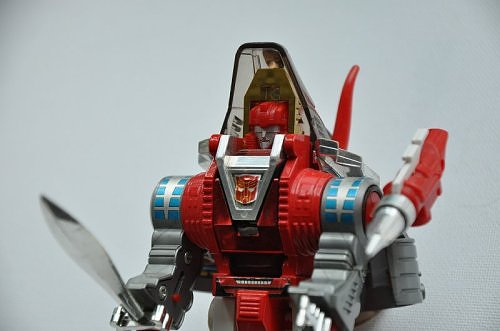 Man, I am one happy camper!

Posted by Heroic Decepticon at 00:00