This one is the one, I told myself.

It's been a very long time coming, since the very beginning, since 1984 in fact when mum would not buy me a Ravage and Rumble set. Over the years, I have acquired and re-acquired Ravages and Rumbles, pre-rub versions and rub-sign versions, plastic and metal versions, but these were still not enough. There was still a gnawing feeling in my soul that all of these Ravages and Rumbles cannot scratch at.

I continued to look for sealed Ravage & Rumble sets over the years. At the turn of the century, they were averaging between US$150 to US$250 a piece, too expensive for me because I was still a student. By 2004-2006, prices spiked and almost doubled for MOSC Ravage & Rumbles, plus the advent of AFA grading made prices even higher. Again, I just could not find a set at the right price.

Soon, the Zhong Jin knock-offs/counterfeits ("KOs") were released. The KOs were so similar to the originals on the face of it that its very difficult to distinguish genuine Ravage & Rumbles from the KOs. The market was in a state of panic and I refused to continue to hunt for an MOSC set online for fear of purchasing a KO.

Recently this year, I chanced upon an eBay auction from a 'daddy/mummy' type seller as opposed to 'professional sellers' whom I dislike buying from. They said they had a MOSC Ravage and Rumble set for sale. I was very interested and asked many questions about the set and where they got it from and how. They told me that they recently picked it up at a yard sale for US$1. It was one of the old toys the sellers' son just did not get around to opening. They said, 'we bought it for $1 and have listed it for $10. There's really no reason for us to go to great lengths to cheat you for something we bought for a dollar.'

I was a little more at ease, but nonetheless requested the help of vintage collectible extraordinare 5FDP of OZ Formers to help suss things out. Over a couple of days, we poured over the photos, the auction listing and thought about the sellers' reply. With the help of the HighEnd TFs site, we concluded that the set for sale was indeed a genuine Ravage and Rumble set.

I bid furiously for it (now, money is not an issue). To my eternal delight, I won it for quite a bit under US$100! I guess, there was still the prevalent fear of the Zhong Jin KO.

This completes the circle. I have come full circle back to 1984 and scratched the 26 year itch in my soul.

A full circle recap of the Ravage & Rumble timeline: 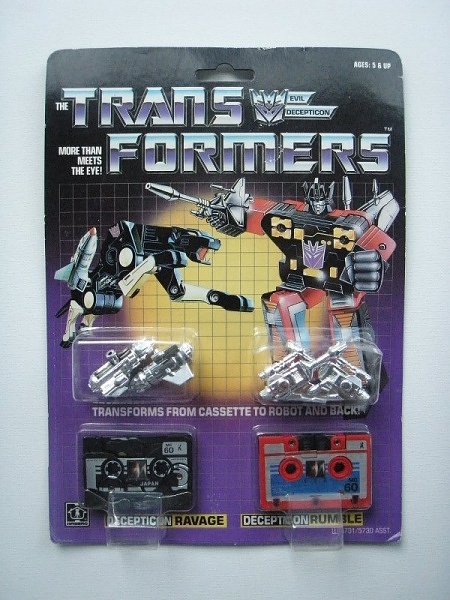 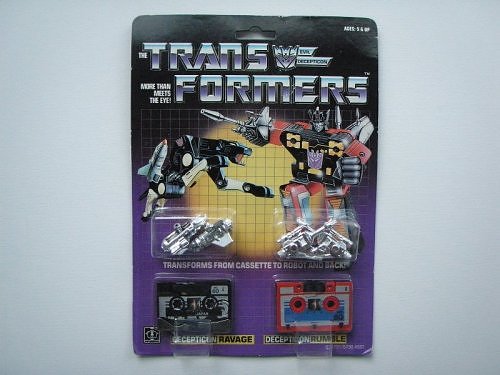 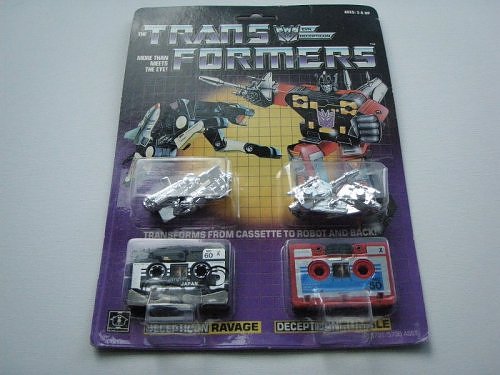 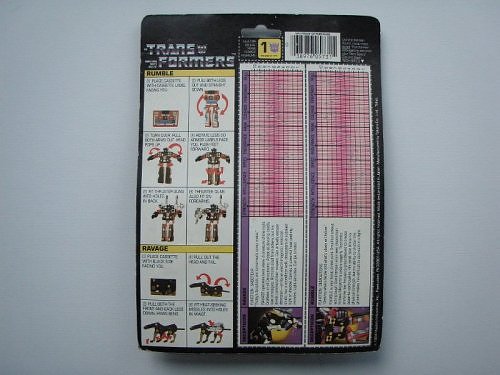 'Box art' on this is still brilliant. 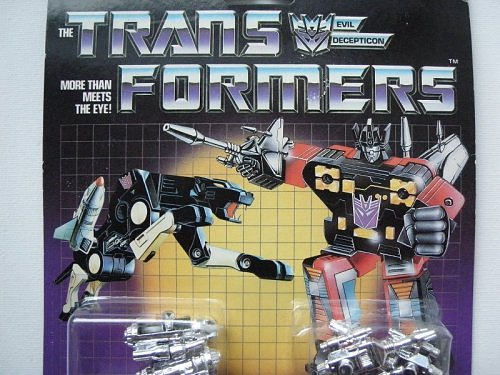 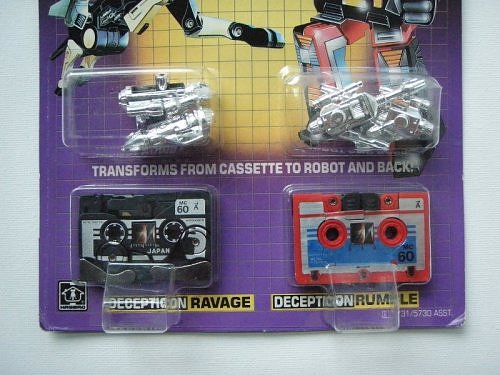 The Ravage box art is one of my all time favourites and a big reason why I wanted this set as a kid. 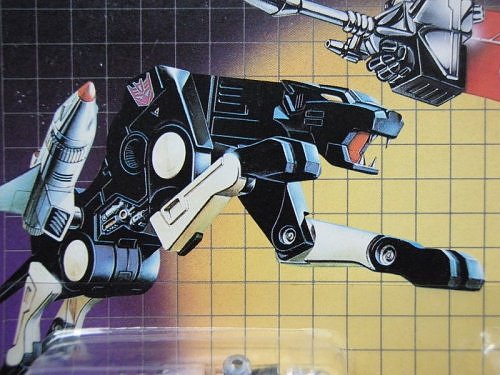 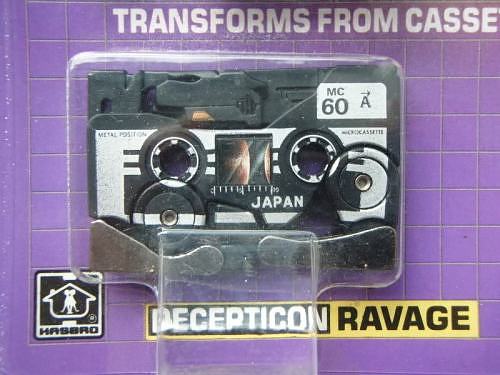 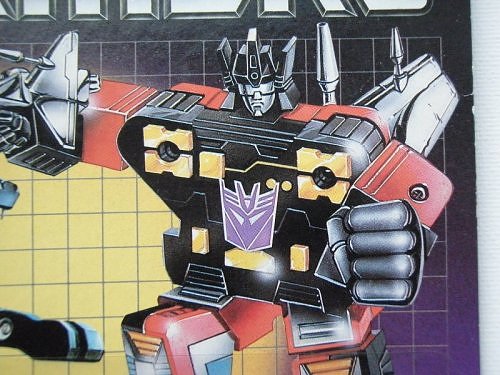 Pre-rub Rumble. I may not be able to see it, but I know that there will be a Decepticon insignia on the flip side, just like in his box art (this is something the rub-sign version does not have). 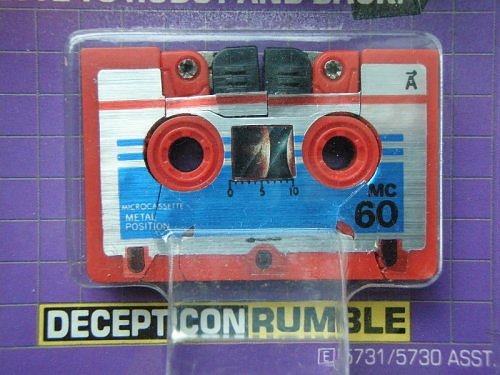 With the advent of the recent KO (knock-offs; counterfeits), how can we tell whether this set is the real deal?

[1] "Evil Decepticon" words
According to HighEnd TFs, for the KOs, the ""Evil Decepticon" in the title is positioned too far to the left and runs into the Decepticon logo. This is the tell I recommend you use. It's very straight-forward, and it's usually visible, even in bad Ebay photos".

Below is a photo of my set, where the "Evil Decepticon" words are placed just right. See the HighEnd TFs site for further reference and comparison photos. 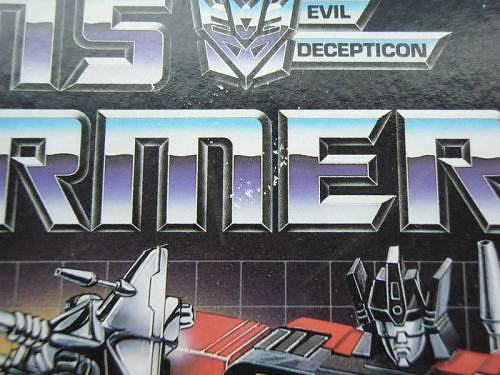 [2] Screws on Rumble + lining up of name with assortment number
According to HighEnd TFs, "The screws/rivots in Rumble's arms are flat and shiny on the counterfeit, instead of dark and with a hole in the center. See title image above for an example of this. This is a great tell. I recommend using it. (Note for those trying to ID loose Rumbles that on the robot side of some real Rumbles, this piece is indeed flat, but never the cassette side.)". The picture below shows a Rumble whose screws are 'dark with a hole in the center', a sign that it is genuine.

Also according to HighEnd TFs, for the KO "Rumble's name doesn't line up correctly with the assortment number. Basically, the end of "Rumble" should touch the edge of "7" in "5730". However, it goes further and touches the edge of "3" on the counterfeit". In the picture below, the name "Rumble" touched the edge of the "7", a further sign that this is a genuine set.

[3] Position of Hasbro logo + metal shine on Ravage
According to HighEnd TFs, "The Hasbro logo is too far left on the counterfeit--it goes outside the grid". The photo below shows that the Hasbro logo sits firmly within the grid.

Further, "The metal on Ravage is too shiny on the counterfeit. See here. On the original, the metal parts on Ravage are a dull color, not shiny silver. But light can play tricks in auction pictures, so this may not be the best tell to use". See the HighEnd TFs site for further reference and comparison photos. 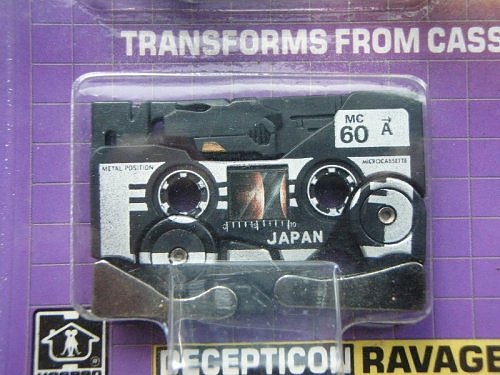 [4] Others
For more information on to tell whether a Ravage and Rumble pack is genuine, see the very useful guide to distinguishing the "creme from the crap" over at Highend TFs.com.
Posted by Heroic Decepticon at 17:47